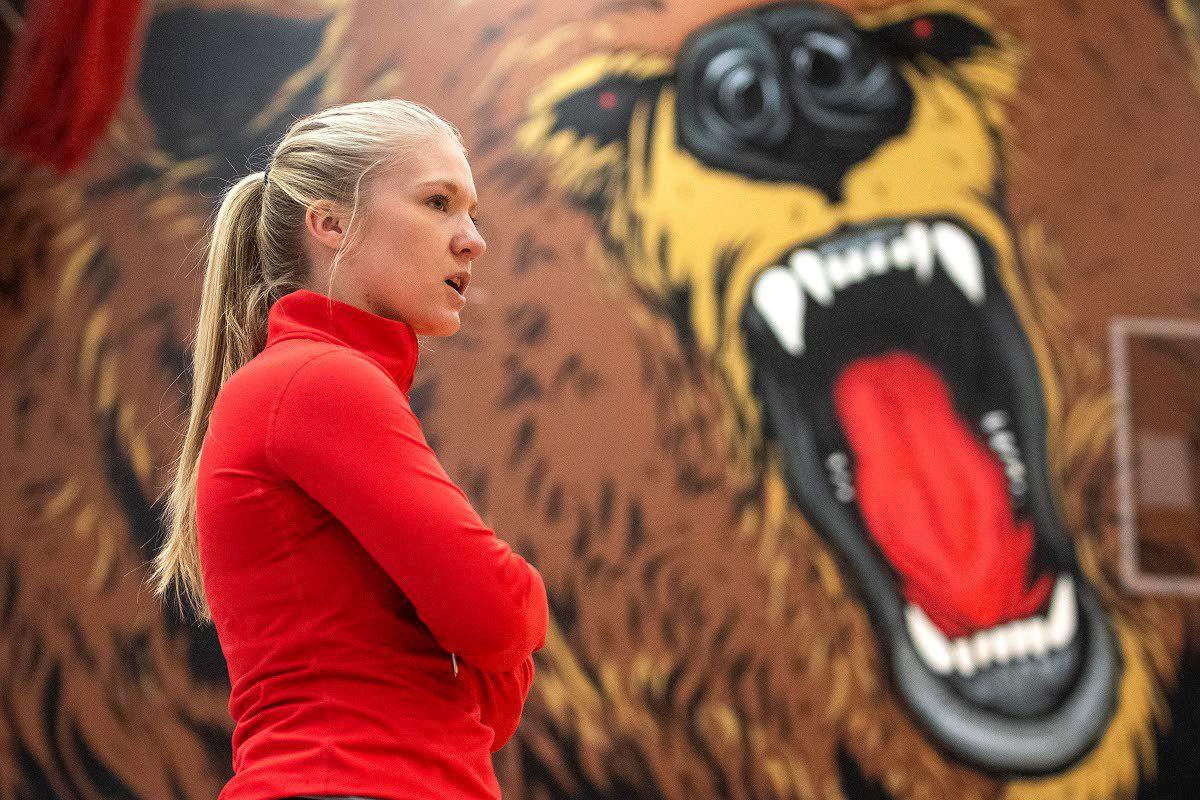 Moscow High School girls’ head basketball coach Karlee Wilson encourages her players during a drill at practice Nov. 20, 2018. Wilson will be coaching for the Lewiston Bengals in the fall. 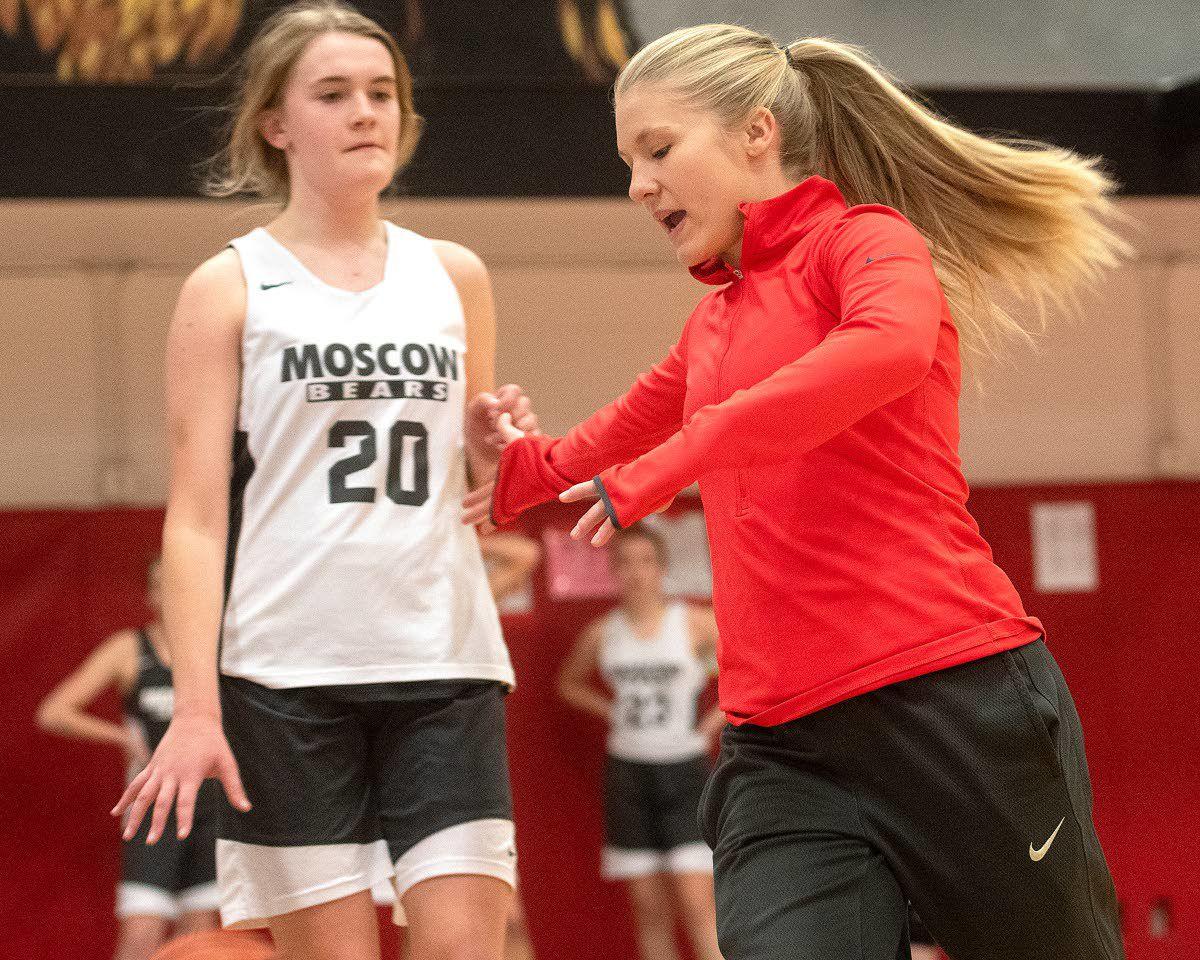 Moscow High School girls head basketball coach Karlee Wilson demonstrates the proper defensive technique to one of her players during a drill Nov. 20, 2018 at practice.

Moscow High School girls’ head basketball coach Karlee Wilson encourages her players during a drill at practice Nov. 20, 2018. Wilson will be coaching for the Lewiston Bengals in the fall.

Moscow High School girls head basketball coach Karlee Wilson demonstrates the proper defensive technique to one of her players during a drill Nov. 20, 2018 at practice.

Wilson described herself as “very excited to be a Bengal,” calling the move a “homecoming.” She was notified by friends weeks ago that the position had come open with the resignation of former Lewiston girls’ coach Steve Lear.

Wilson is expected to do no less for the program. Williams, who worked as a teacher and athletic director during Wilson’s time as a student at Lewiston High from 2009-13, said that just as Wilson is excited to return, the administration is eager to welcome her back into the fold.

“It was about her getting back into the purple and gold and having the Bengal pride that never left,” Williams said. “She’s excited to take the reins and run with it.”

“Always being a Bengal and wanting Lewiston to always be successful in athletics definitely pushed me to interview for the job down there as the head girls’ coach,” said Wilson.

Wilson played varsity all four years in high school and was part of back-to-back state-title-winning Bengal squads in 2011 and 2012. She was a first-team all-state honoree as a junior, and as a senior, averaged 15.3 points and four steals per game.

In college, Wilson played point guard for Idaho and was team captain and Big Sky Co-Defensive Player of the Year as a senior in the 2016-17 season. She averaged 5.5 points, 3.3 assists, 3.2 rebounds and 1.3 steals per game across 109 appearances, and led the league in assists as a senior.

Wilson helped boost the Vandals to a 2016 Big Sky title, a 2014 Western Athletic Conference crown and two NCAA Tournament berths, those coming in 2014 and 2016.

She was hired as Moscow head coach in 2018, and the Bear girls amassed a cumulative record of 9-31 during her time at the helm. She named “experience with running a program as a whole” as a key benefit of her time with the Bears.

“There’s a lot that goes into it that some people may not know,” she explained. “All the ins and outs of what it takes to be a head coach that has multiple teams under them, and also just building the culture that you want with the girls that you have — building them to be good players on the court, but also good people. I think my two years coaching at Moscow High definitely helped me in knowing what I want my teams to stand for.”

“I thought Karlee did a great job for us,” Moscow athletic director Lance Abendroth said of Wilson. “She was a really good fit for us, and she helped us into a new direction. She got along great with our staff and with the kids — our student-athletes — and I’m definitely going to miss her.”

Wilson has substantial prior experience with the Lewiston squad she is inheriting, having worked with some of the players in youth camps years ago and coached the Moscow girls against them in multiple nonleague contests over the past two seasons. She held her first open gym with the Bengals last week, although activities were and will continue to be limited due to coronavirus protocols.

Wilson’s key goals in her new position include making the team competitive in the Inland Empire League and in the annual Golden Throne rivalry game against Clarkston. Lewiston went 3-20 last season and was handled 58-31 by the Bantams in the Golden Throne contest.

“Those are big games for our girls in their high school careers,” said Wilson, who also hopes ultimately to take the Bengals back to State.