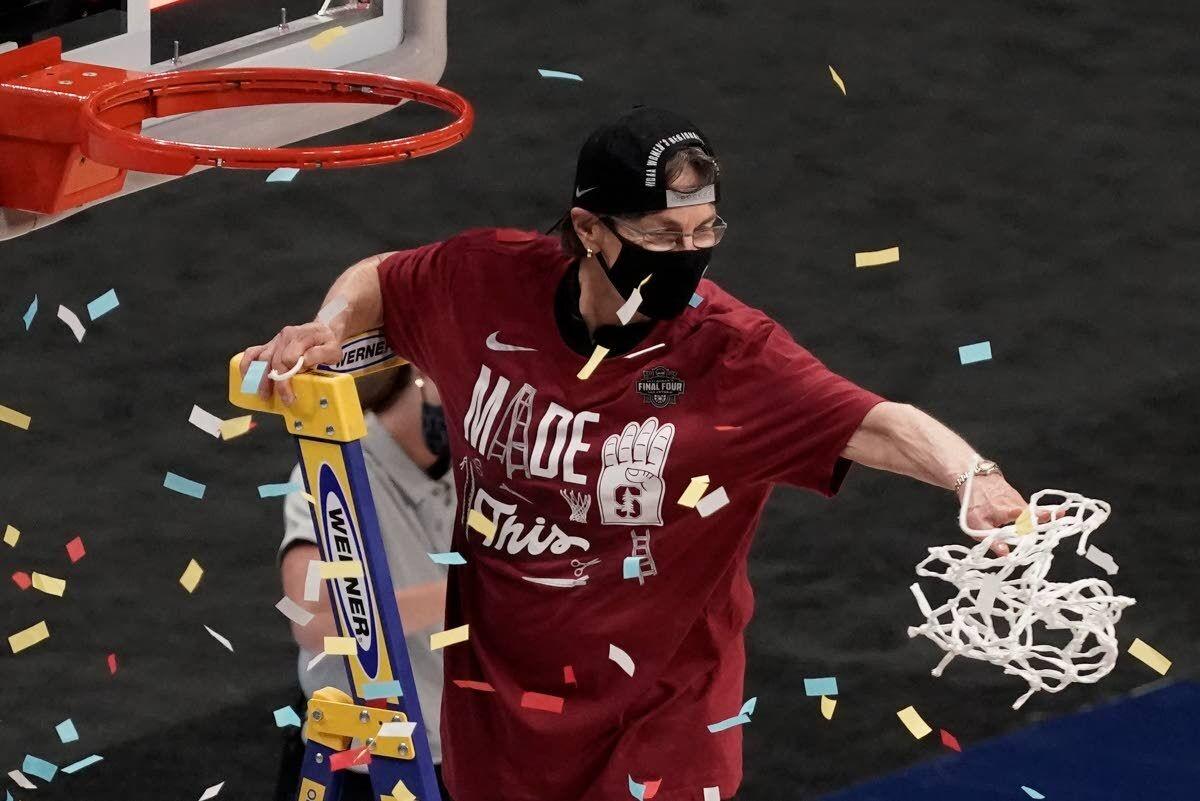 Players toss confetti in the air as Stanford head coach Tara VanDerveer cuts down the net after an NCAA college basketball game against Louisville in the Elite Eight round of the Women’s NCAA tournament Tuesday at the Alamodome in San Antonio. 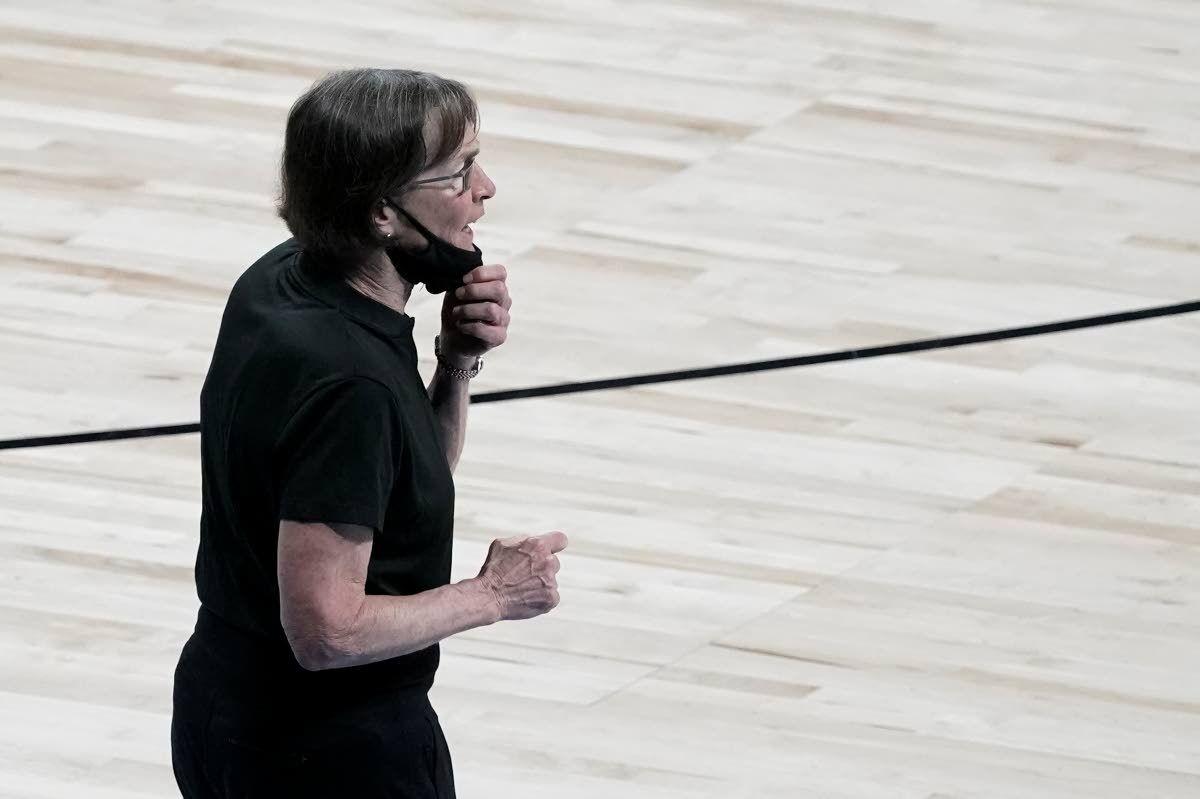 Stanford head coach Tara VanDerveer reacts during the first half of an NCAA college basketball game against Louisville in the Elite Eight round of the Women's NCAA tournament Tuesday, March 30, 2021, at the Alamodome in San Antonio. 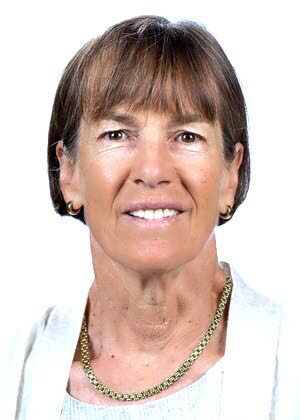 Players toss confetti in the air as Stanford head coach Tara VanDerveer cuts down the net after an NCAA college basketball game against Louisville in the Elite Eight round of the Women’s NCAA tournament Tuesday at the Alamodome in San Antonio.

Stanford head coach Tara VanDerveer reacts during the first half of an NCAA college basketball game against Louisville in the Elite Eight round of the Women's NCAA tournament Tuesday, March 30, 2021, at the Alamodome in San Antonio.

When Tara VanDerveer applied for the head-coaching job in women’s basketball at the University of Idaho in 1978, her official credentials were thin. She’d never run her own program at any level, and she’d landed her first paid assistant’s position just two years earlier. She was 24.

But her unofficial credentials — her rigorous approach to the game, for example — were apparent to then-UI administrator Kathy Clark, and would later become apparent to Vandal players.

“We knew she was good,” Karin Sobotta, a freshman guard on VanDerveer’s first Idaho team, said by phone this week. “We were well-coached and we were in better shape than anybody we played.”

Forty-three years later, VanDerveer is aiming for her third NCAA tournament championship as the boss at Stanford, which faces South Carolina at 3 p.m. PDT today in a semifinal game at San Antonio.

VanDerveer spent only two seasons at Idaho, but they were consequential for the coach and the school. Also for her players, who were struck by how she infused her exacting demands with intelligence and, in certain settings, a hint of goofiness.

The UI women’s basketball program was only 5 years old when she took over, and had lost 38 of 56 games. But it was starting to show progress, and that trend accelerated quickly under VanDerveer.

“She was committed to basketball and learning everything she could about the game,” said Clark, the now-retired associate athletic director who oversaw UI women’s sports at the time and hired VanDerveer with the blessings of athletic director Bill Belknap.

The Vandals went 42-14 during VanDerveer’s tenure and reached the national tournament her second year. When she left to take the reins for an Ohio State program that had broken her into the profession, the Vandals breezed to another six straight winning seasons under successor Pat Dobratz.

“This was early in the growth of women’s sports, period, not long after Title IX, and we were all growing and developing programs across the country,” Clark said. “So each year there was progress made in terms of budget and support. But almost instantly people were drawn to her (VanDerveer) in terms of commitment and approach to the game. So she developed a lot of following across the campus from the professors of her student-athletes. That was before there was much recruiting going on, so she took what she had and built on the program. We wish we could have kept her a lot longer than two years.”

Liz Abel, who in 2019 retired after 36 years in the University of Utah athletic department, was playing for Indiana in 1978 and looking to transfer. Someone familiar with VanDerveer recommended she choose Idaho.

“My best friend had played for Tara when she was a graduate student at Ohio State, and things didn’t work out for me at Indiana,” Abel said by phone Thursday. “She said, ‘This is the best coach in the country.’ So I transferred to Idaho, sight unseen.”

She played for VanDerveer for only season before the coach left, but “in many ways she was the most influential person in my life,” Abel said. “Everything she instilled in me is so deeply embedded.”

Noting Abel’s interest in athletics and writing, VanDerveer steered her toward a career in sports information, using her connections to get her an initial job in that field.

According to her former UI players, one key to VanDerveer’s success is a keen and ever-evolving attention to detail.

“Tara is one of the smartest and most inquisitive people you’ll meet,” Abel said. “If there’s anything out there that interests her as an idea, she’s going to follow through with it. And she’s an absolute stickler for detail.”

Sobotta spoke of team workouts long before the start of the season — in August, sprints on the UI track followed by 2-mile road runs.

“I remember going into her office and looking for her,” she said. “The receptionist said she wasn’t there and to just hang out and she’d be back. It made me think of the Wizard of Oz. She had all these computer systems set up on the wall. She had one for defense and one for offense and one for inbounds. I couldn’t believe it. She’s a student of the game, for sure.”

During the coach’s time at Idaho, Clark was both impressed and slightly worried about her single-minded devotion to the sport.

“My only concern early in her career was that she not burn out because of that early focus,” she said. “But she’s protected herself from doing that, obviously, because she’s been at it very successfully for a very long time.”

As Clark noted, VanDerveer is an accomplished pianist. Sobotta decribed visiting the coach at a summer lakeside home and, yes, finding her studying basketball film even that time of year. But they also went sailing, and Sobotta was astounded by her knowledge of that craft.

At Idaho, the non-basketball aspects of VanDerveer’s personality came out gradually. In the context of the game, she was demanding. She had played basketball at Indiana when Bobby Knight was the men’s coach, and although she doesn’t necessarily describe him as a huge influence, she did spent time studying his ideas.

Abel had grown up in Ohio, and upon her arrival at Idaho her new teammates learned she had never attended a rodeo. A few of them decided to do something about that, escorting her down the Lewiston Hill in one of the players’ vans and spending an evening watching the Lewiston Roundup.

When it was done, their van refused to start.

“We were all, like, ‘We have to go to practice tomorrow — how are we going to get back to Moscow,’” Sobotta recalled. “We called her (VanDerveer). It was 11 at night, but she did come and get us in her tiny little car. We all had to squeeze in there. I think I sat on somebody’s lap.

“She was not happy with us,” she said. “I think we had to run extra lines the next day.”