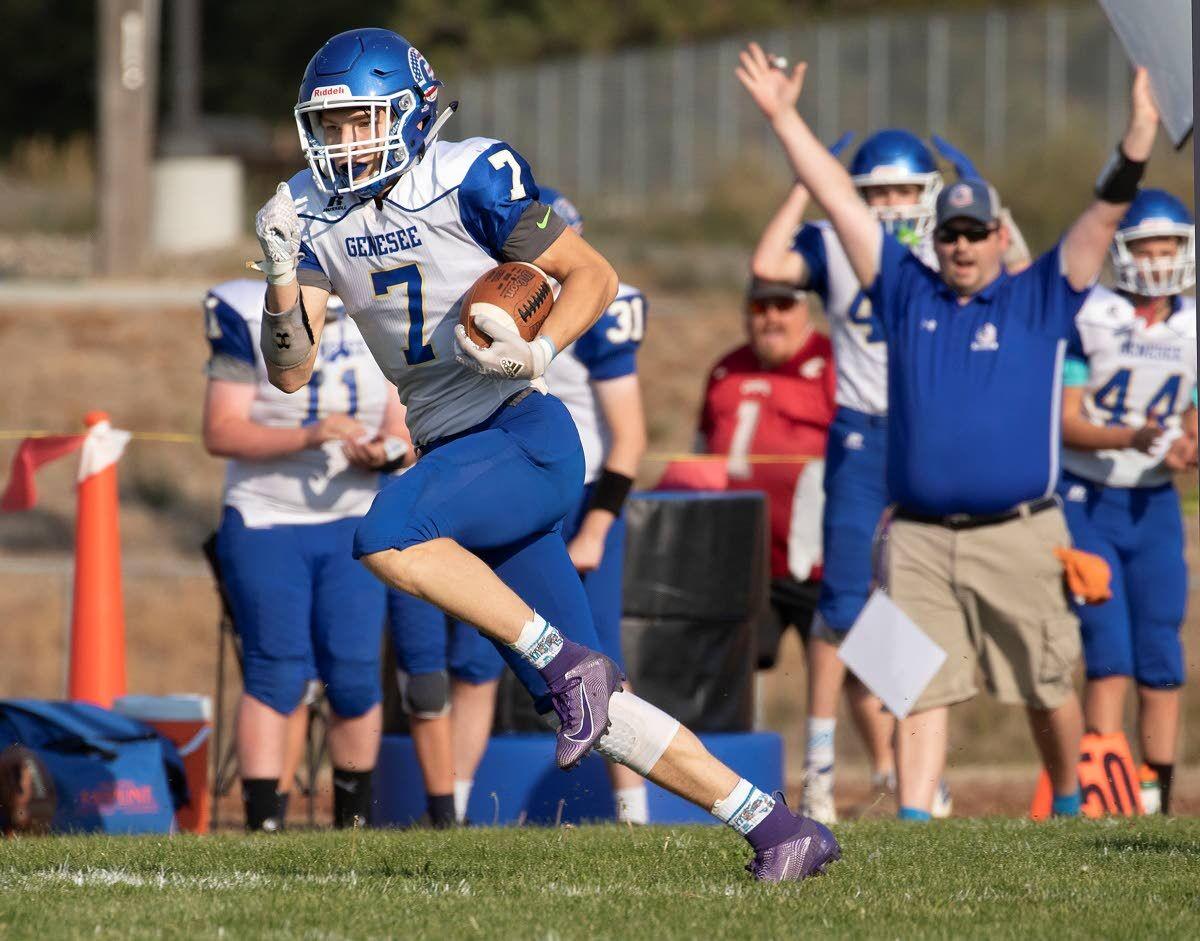 Genesee wide receiver Dawson Durham breaks away for a touchdown in the first quarter of a game against Potlatch on Friday in Potlatch. 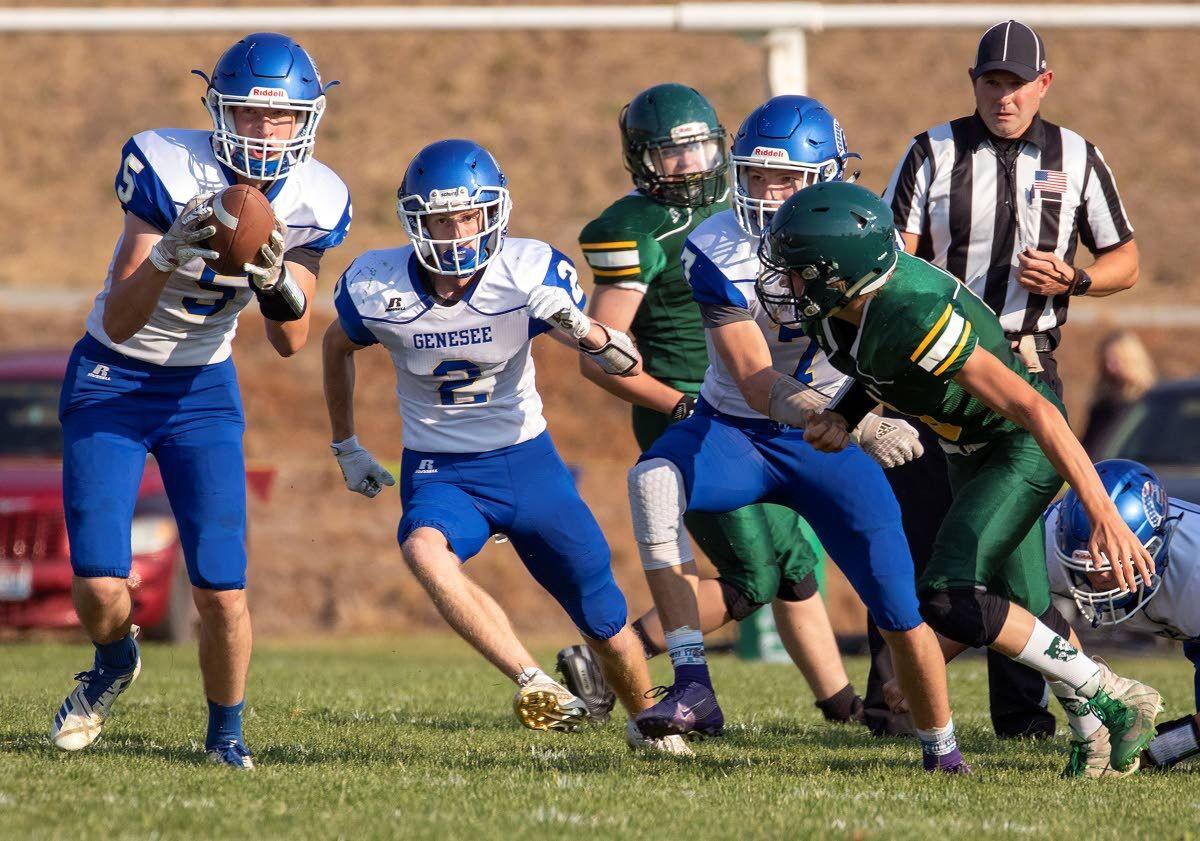 Genesee cornerback Cy Wareham, left, intercepts a Potlatch pass before running it back for a touchdown in the first quarter on Friday in Potlatch. 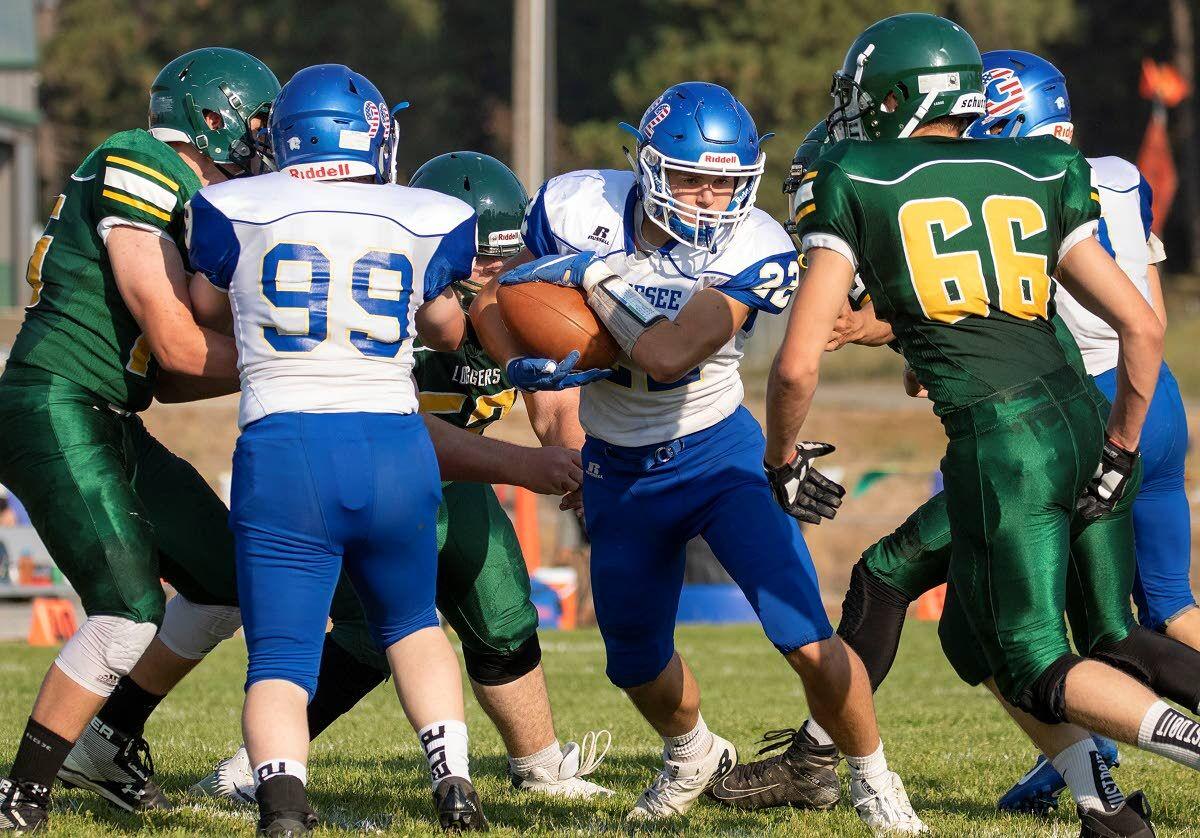 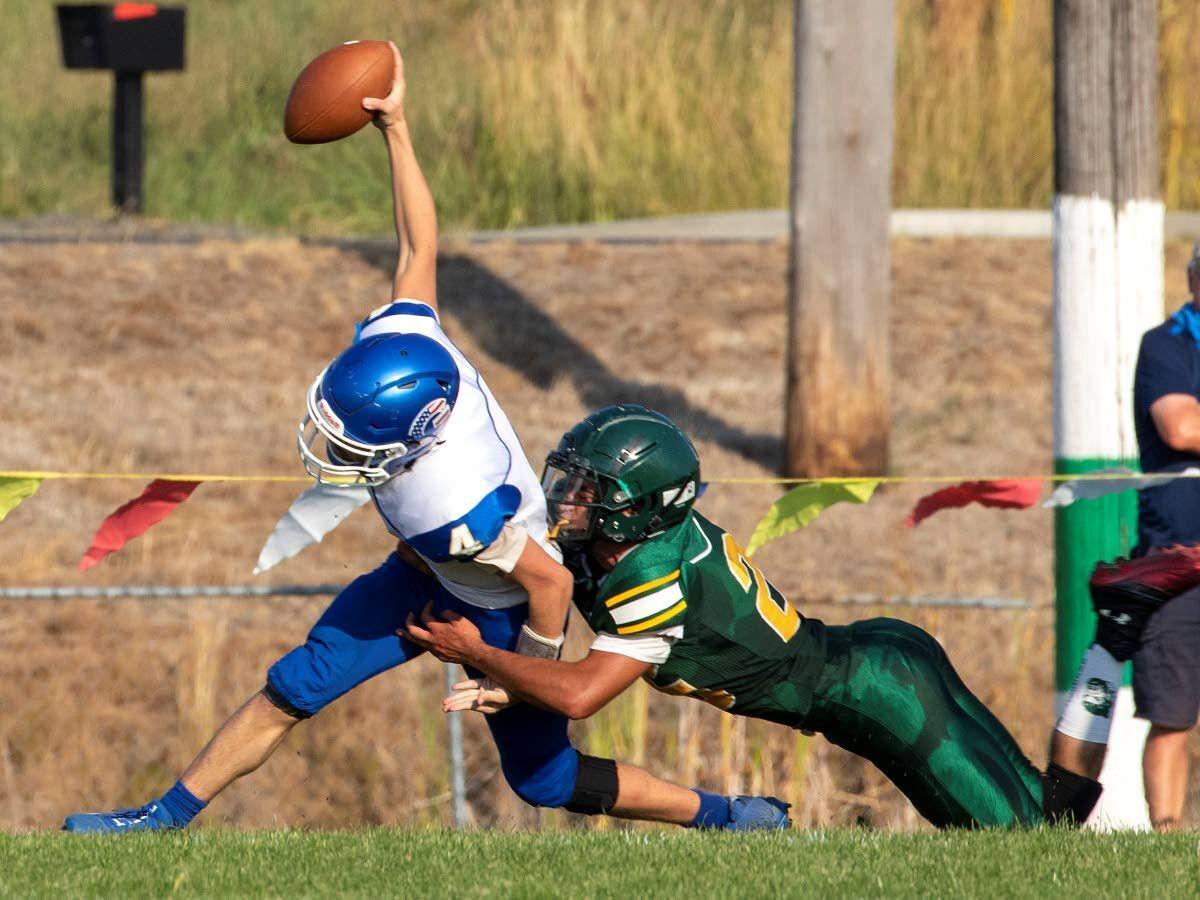 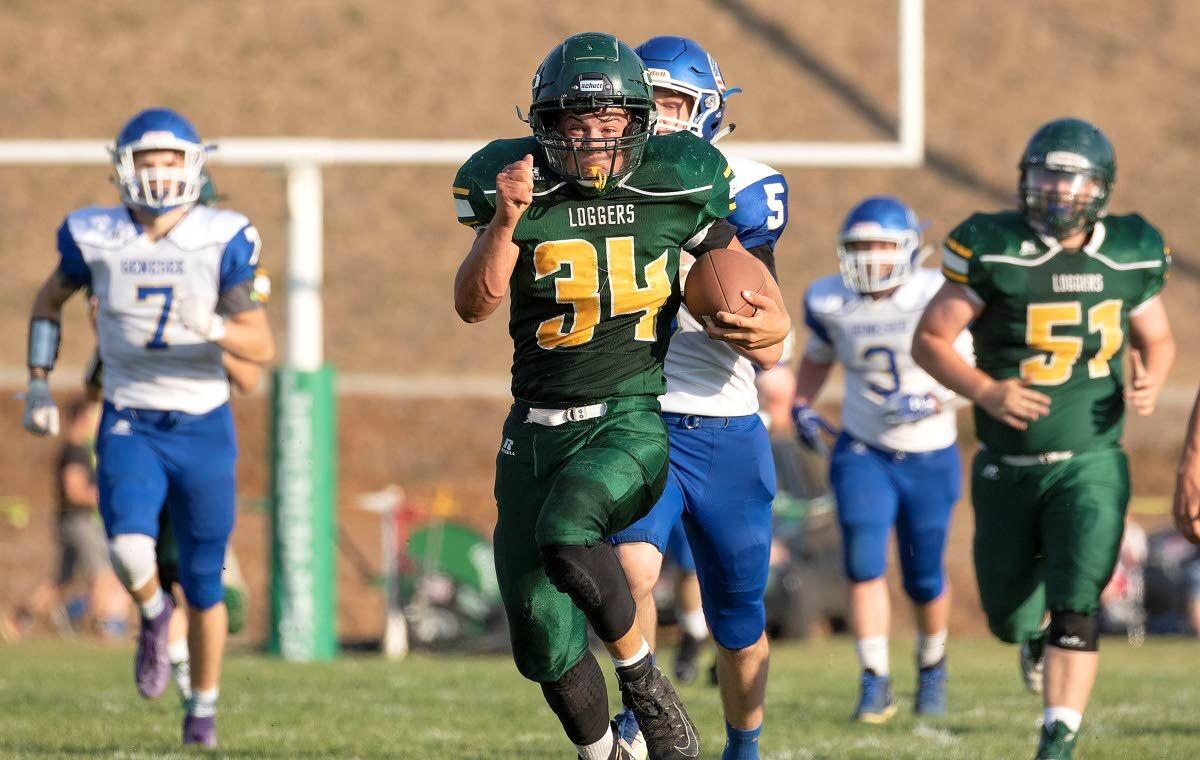 Potlatch runningback Tyler Howard, center, breaks away for a touchdown run in the second quarter of a game against Potlatch on Friday in Potlatch.

Genesee wide receiver Dawson Durham breaks away for a touchdown in the first quarter of a game against Potlatch on Friday in Potlatch.

Genesee cornerback Cy Wareham, left, intercepts a Potlatch pass before running it back for a touchdown in the first quarter on Friday in Potlatch.

Potlatch runningback Tyler Howard, center, breaks away for a touchdown run in the second quarter of a game against Potlatch on Friday in Potlatch.

POTLATCH — Going into Friday’s game against Potlatch, it had been three years since visiting Genesee had recorded more than two wins in a season, and two years since the Bulldogs won any Whitepine League Division I contest.

Both of those droughts were broken in style as they claimed a 48-30 victory against the Loggers to remain unbeaten on the season.

“It really felt like we had a great week of practice,” Genesee coach Alex Schnebly said. “I didn’t really have any doubt in my mind that we were going to come out to play.”

Come out to play they did. The Bulldogs reeled off 20 points in the opening quarter and added another 28 in the second for a 48-24 halftime lead.

Genesee (3-0, 1-0) has enjoyed a major boost this year from the incorporation of a half-dozen players from Colton. Most prominent among those new contributors is sophomore quarterback Angus Jordan, who threw for two touchdowns and ran for three more, totalling 264 passing yards along with 100 rushing.

“The fact that he is able to move around and still keep the play alive for our receivers makes him stand out as — I’m going to say — one of the better quarterbacks in our league,” Schnebly said of Jordan, who was one of the smaller players on the field but punched above his weight. “It’s an excellent addition from Colton. The fact that he’s able to spread the ball around to all three of our receivers, and even our running back, proves that that chemistry is really there between the Colton kids and the Genesee kids.”

Jordan passed to Genesee veteran Dawson Durham for the first touchdown of the day. An opportunistic Cy Wareham provided the Bulldogs’ next two with a 47-yard fumble return and 80-yard kickoff return.

Junior running back Tyler Howard put the Loggers (0-2, 0-2) on the board with a 1-yard end run. Howard was continually mobbed by a wary Genesee defense, but still successfully ran or caught passes from quarterback Tyson Tucker for all four Logger touchdowns in the opening half. He ultimately totaled 188 rushing and 108 receiving yards on the day.

A stretch of three Bulldog touchdowns in rapid succession midway through the second turned the game from a potentially tight battle at 28-18 with Potlatch in possession to 48-18. On the first score, Jordan broke through the pack and shook off several Potlatch defenders in a 41 yard dash to the end zone. Next, he launched a long pass to an open Wareham. Finally, Jordan showcased his quick thinking and lateral movement in a cagey 4-yard run through a Potlatch defense that was expecting him to attempt another throw.

After a first half that was something of a scoring extravaganza, the second half struck a sharp contrast, becoming a virtual defensive stalemate.

In the final minute of a scoreless third, Potlatch lineman Izack McNeal sacked Jordan with sufficient ferocity the Genesee quarterback needed to step out of play temporarily, with Durham stepping into the position. The Loggers struggled to break through the smothering Bulldog defense, but came to dominate possession in the fourth until Tucker finally broke through within the closing minute for the lone scoring run of the second half.

The Loggers will next look for their first win of the season at 5 p.m. Friday in a nonleague showdown with Deary at home, while the Bulldogs set their sights on another league foe as they try to remain unbeaten in an away game against Clearwater Valley of Kooskia.

“We felt that tightening up our defense and holding them off was kind of the key to finishing out the game,” said Schnebly, who considers his team to be “riding high” after completing its hat-trick of wins to start the season. “I definitely didn’t want the offense to slow down like it did, but it definitely provided the opportunity of growth to see what we need to do going into (the contest with) Clearwater Valley next week.”

Wendt can be reached at sports@lmtribune.com.