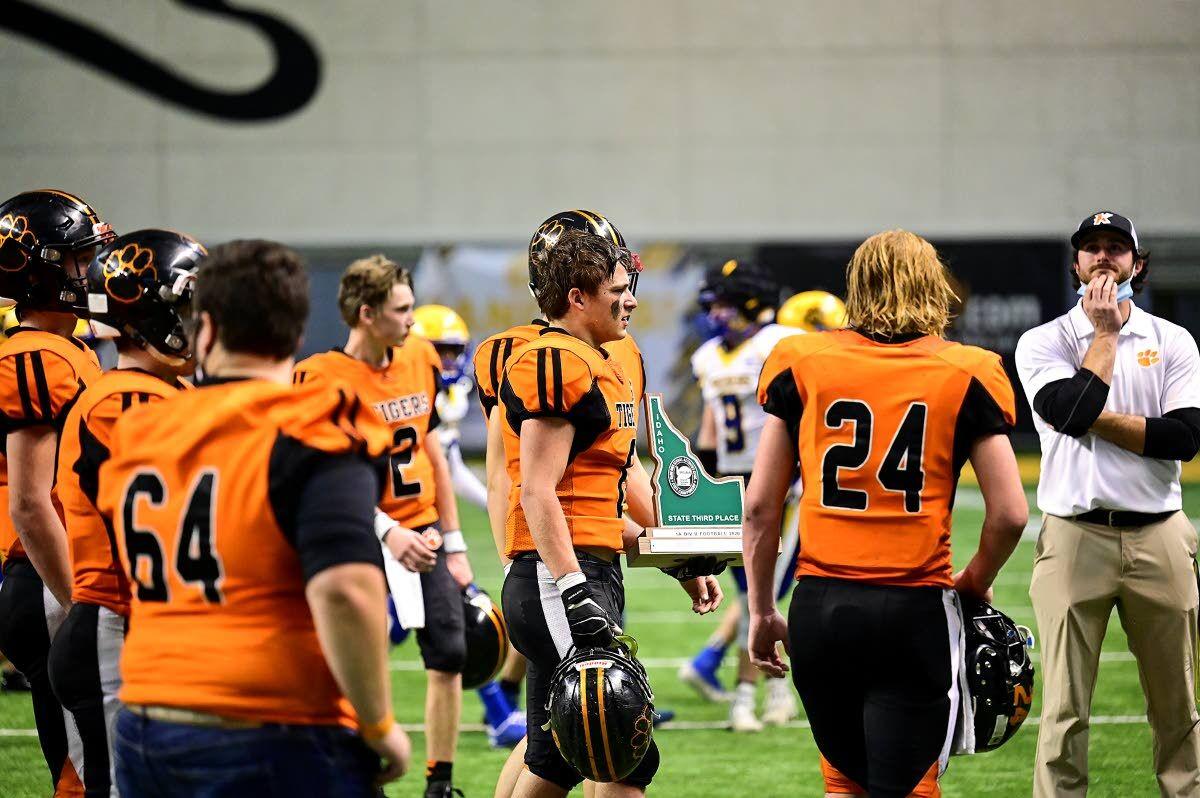 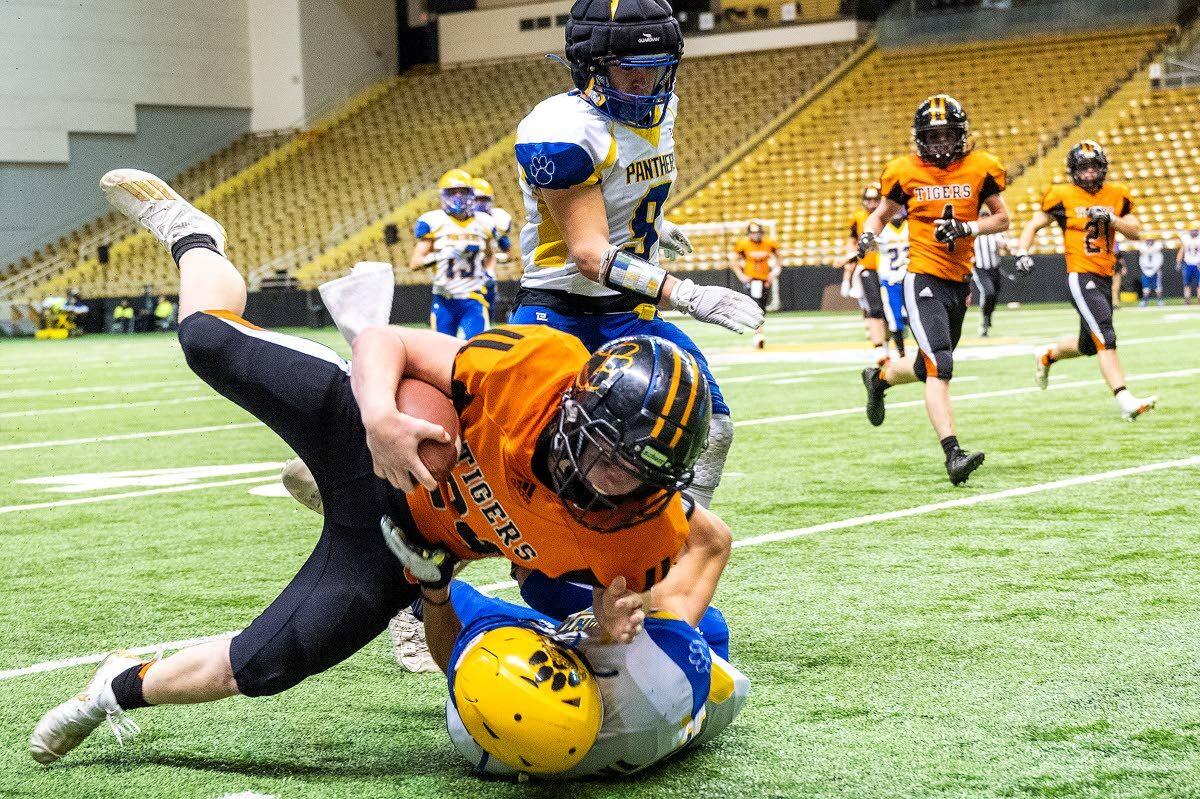 After catching a pass from quarterback Ty Koepp, Kendrick’s Matt Feltcher bowls over a Carey defender during the fourth quarter of an Idaho Class 1A-DII state semifinal game. 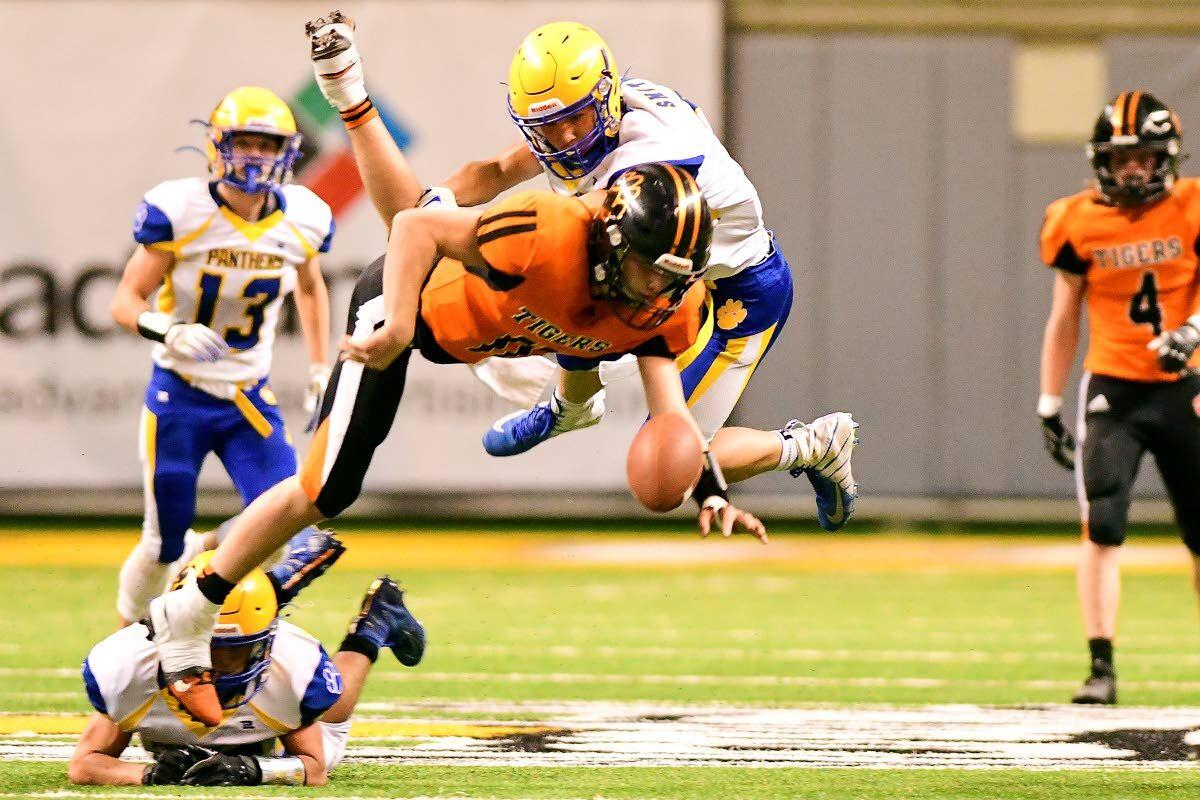 Carey’s Hunter Smith knocks the ball out of the hands of Kendrick quarterback Ty Koepp as he attempts to rush for a first down late in the second quarter of a Idaho Class 1A-DII state semifinal game on Monday night at the Kibbie Dome in Moscow.

After catching a pass from quarterback Ty Koepp, Kendrick’s Matt Feltcher bowls over a Carey defender during the fourth quarter of an Idaho Class 1A-DII state semifinal game.

Carey’s Hunter Smith knocks the ball out of the hands of Kendrick quarterback Ty Koepp as he attempts to rush for a first down late in the second quarter of a Idaho Class 1A-DII state semifinal game on Monday night at the Kibbie Dome in Moscow.

Kendrick gave the top-ranked team in Class 1A Division II Idaho football perhaps its toughest test of the season, but a three-play swing of momentum in the third quarter of a state semifinal game handed Carey the edge necessary to storm ahead to its fourth consecutive title game.

The Panthers forced their foes from the north into four turnovers, got into a second-half offensive groove and blanked the Tigers after intermission to emerge with a 40-14 win on Monday night in the Kibbie Dome.

“First thought is: Our kids just played their tails off — all of them, every single guy,” said Kendrick coach Zane Hobart, whose team has fallen short in the semifinals each of the past three years. “We just left it on the field tonight. I was proud of every single guy, and we were close. We were close.”

Carey (8-0) snapped a 14-all tie early in the third, taking its first lead with a 27-yard scoring scamper from star back Conner Simpson, an incredibly balanced runner with a low center of gravity at 5-foot-3.

“That kid can run,” Tigers defensive end Rylan Hogan said of Simpson, who piled up 290 yards from scrimmage and five touchdowns on 23 touches. “He pumps his legs and just keeps going.”

Panther quarterback/defensive back Hunter Smith jumped a lofted ball over the middle from Kendrick freshman quarterback Ty Koepp on the ensuing play, and Simpson found a crease on the next snap for a 22-yard touchdown run.

“That’s a good team that has great offensive play-calling,” said Panthers coach Lane Kirkland. “But I think we just wore them down, figured ’em out a bit.”

Added Simpson: “That was definitely a mood-swinger. We all got the confidence and wanted to finish it.”

Kendrick (6-2) had a chance to get back into it moments later, when freshman Wyatt Fitzmorris took a screen pass and zoomed 66 yards to the Panther 2.

But an interception at the goal line was again cashed in by Simpson and the versatile, misdirection-heavy Carey offense.

“That was a big turning point right there,” Hobart said.

Koepp had his moments, but was intercepted three times and stripped on a chunk run late in the second quarter. The high-ceiling rookie went 17-of-43 passing for 249 yards, and added 89 ground yards and two total touchdowns.

The Tigers caught Carey off-guard with an opening-kick onside, which they recovered to collect some early mojo.

Kendrick had possession for about 15 more minutes than Carey as it leaned on methodical possessions featuring quick reads from Koepp and moderate runs.

“Our defense was on the field a long time. They did a great job figuring things out,” said Kirkland, whose team will seek its sixth crown since 2006 when it squares off with Sawtooth Conference rival Dietrich in next weekend’s championship.

The Tigers capped a 12-play, six-minute drive midway through the second — which included a fourth-and-5 pick-up in the red zone — with a 1-yard Koepp sneak to go up 14-6.

“We were clicking on all cylinders, kinda shocking them, kinda having them on their heels. Did a good job until halftime,” Hobart said. Kendrick played the second half without Taylor, a two-way contributor who exited with an injury.

The Panthers outgained the Tigers only 387-386.

Kendrick’s defense stole much of the spotlight early, setting the edges and limiting explosive plays from the state’s No. 2 offense. The Panthers turned it over on downs on three first-half possessions.

The game was originally slated to be played Saturday, but wintry road conditions in the southern portion of the state forced Carey to turn its bus around after it had already reached Weiser.

“We’d been on the bus 850 miles to play this game,” Kirkland said. “I felt our kids rallied very well to the challenge, a good mental challenge of what’s to come.”