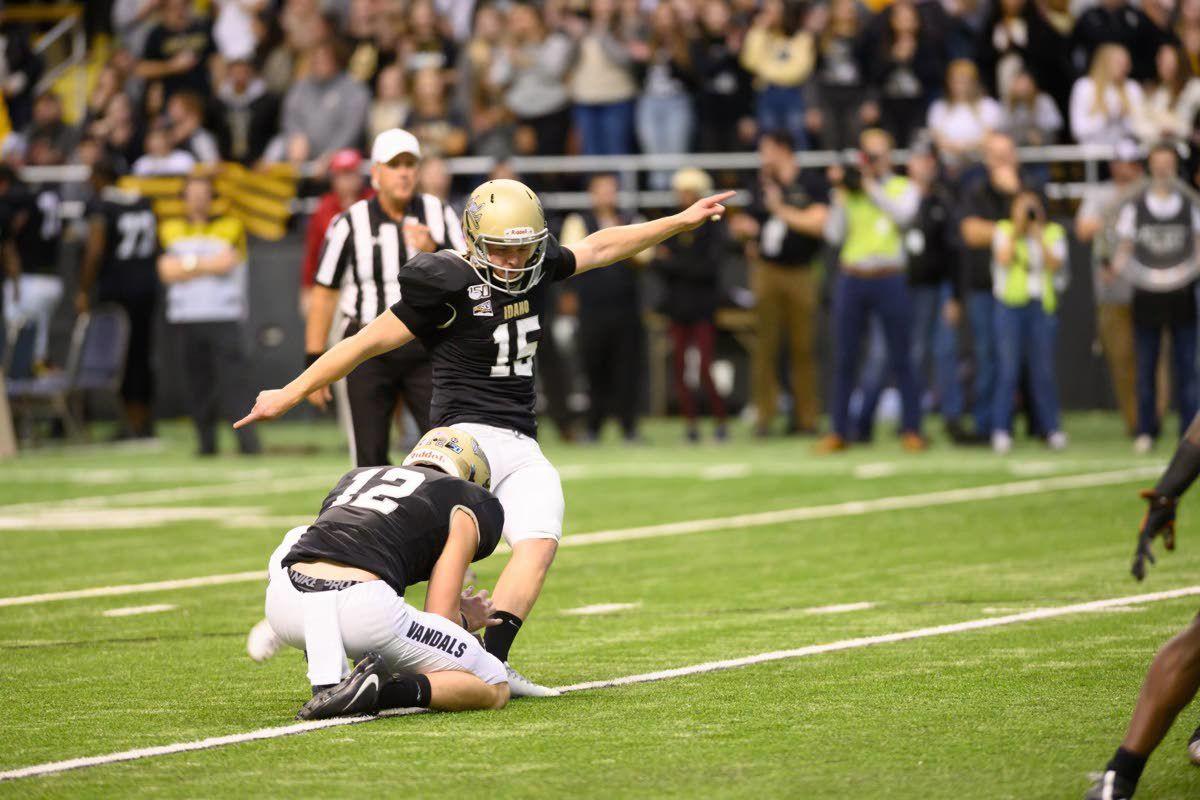 Idaho's Cade Coffey kicks a field goal during a game on Oct. 19 against Idaho State. 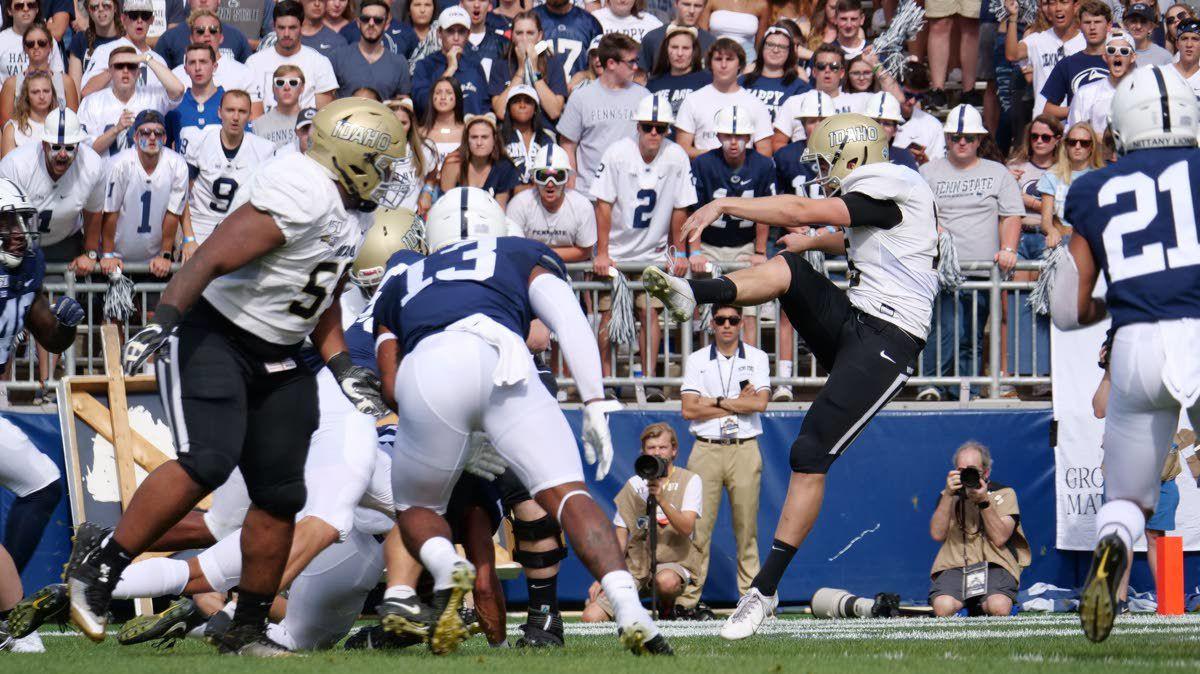 Idaho's Cade Coffey punts a ball away during a game on Aug. 31 at Penn State.

Idaho's Cade Coffey kicks a field goal during a game on Oct. 19 against Idaho State.

Idaho's Cade Coffey punts a ball away during a game on Aug. 31 at Penn State.

Behind the Coffey home just west of Rathdrum, Idaho, lies a couple acres’ worth of pasture. In the middle of an open field sits a stand-up structure made of PVC pipes and aluminum.

Cade Coffey, in between summer golf rounds and hikes, has kept his leg dialed in there, with the makeshift field-goal uprights he and his family raised this spring.

It’d be fair to say the quarantine workout regimen hasn’t been too bad for the senior Idaho kicker/punter, an All-American and four-year starter with a cannon for a right leg and a knack for maneuvering punts inside opponents' 20-yard lines.

“I’ve been able to train a lot,” said Coffey, UI’s only remaining player from his class. “I just wanted to be able to kick at home while practicing social distancing.

“It’s been nice. I was usually with my dad and brothers three or four times per week. I haven’t been able to do that in years.”

Coffey, now back in Moscow gearing up for what’s become a tentative 2020 season, feels as equipped as ever to again guide one of the country’s more impressive special teams units.

“Being a kicker and punter at Idaho comes with a lot of demand and responsibility,” said Lewiston’s Alex Boatman, Coffey’s longsnapper for two years. “He’s been able to live up to it easily.

“By the time his career is over, he’ll be mentioned in the same breath as TJ Conley, Bobby Cowan and Austin Rehkow. He deserves that respect.”

The product of Lakeland High School spent much of the early parts of his junior season grinding through a nagging hip issue. Then, on Oct. 5 against Weber State, he was tagged on a punt and hyperextended his knee.

“Yeah, that didn’t feel too good,” he said. “After that, it was a really big challenge to kick at 100 percent. But I got through it. There was no way I wasn’t going to.”

He still was named an honorable mention All-Big Sky pick — a respectable year, yes, but certainly below preseason expectations for Coffey, one in a long string of gifted kickers at Idaho.

“I’m definitely a lot stronger now,” he said. “My injuries last year made it difficult at times to perform at my best, what I’m capable of. Especially at the beginning of this year, I’ve been really focused on movement drills to strengthen my knees and hips. I’m seeing massive improvements.

“I haven’t been able to lift a lot, but I’m doing more cardio. My mom likes to go on runs.”

Coffey was 10th in the Football Championship Subdivision at 43.8 yards per punt last year. Ask him, and he’d say 10th is nine spots too high. His personal goal for 2020 starts and ends with: “Lead the nation in every punting category.

“If we can do that, that’s definitely going to help with our main goal: to win a Big Sky championship. I think we have the team to achieve it.”

Perhaps to those unfamiliar with the harmonious relationship between UI and specialists, Coffey’s objectives might seem far-fetched.

“(He’s) someone who knows how to work hard by himself, but he’s also very demanding of himself,” Boatman said. “He’s always trying to get better, focusing on the next little thing that will make him even more elite.”

He was 10th in Football Bowl Subdivision punting average as just a rookie, and undoubtedly the best freshman leg at college football’s highest level. Coffey went viral after sending a punt 54 yards while getting spun around by a Troy defender.

“I expect good things from myself. I have confidence every time I step onto a field,” he said.

To cap his sophomore season, Coffey was tabbed to three All-America teams, and ranked second nationally in net punting average. His booming, 80-yard boot in the Kibbie Dome on homecoming against Southern Utah was the classification’s second-longest of 2018.

It stands as No. 2 in school history, by 2 yards. It’s true, Coffey’s tutor — Rehkow, who had some NFL looks — never launched one that far.

Rehkow helped Coffey sort out his fundamentals and mentality during a redshirt year in 2016.

“With everything, 2016 spring to 2017 was my biggest jump. It’s just been more subtle, smaller steps since,” he said.

Coffey, initially more of a field-goal kicker, credits his mentor heavily for his punting evolution, which gave rise to what is seen today.

“I’ve been crushing punts lately,” said Coffey, who feels comfortable on live field goals from 53 yards or fewer. “If we average 43-plus net yards per punt, we’re gonna lead the nation in pretty much every category. Our special teams unit has been putting in a lot of work this summer. I’m feeling really good about it.”

During the age of coronavirus and teleconferences, Coffey has gotten more film work in than ever, along with his isolated training regimen. He’ll often begin and conclude his days with a new drill — he takes his punting steps beside his bed, and drops the ball on top of it as if he were about to let it fly.

“I noticed on punts (in film study), the nose drops down and to the left a little too much,” Coffey said. “Now I’m dropping it flat. I’ve gotten more consistent. Being a specialist is all about the little things. It’s focusing on the muscle-memory, the technical stuff.”

To ascend to the next level, it’ll be about keeping a pace. In punting, Coffey always seems to average about 44 yards per punt, 20 inside the 20, and 20 for more than 50 yards — numbers rivaling mid-level NFL punters. While his field-goal distance has been solid, he’d concede his accuracy could be more steady.

“I’ve just got to be as consistent as possible, and I think it’ll go back to all the work I’ve put in this offseason,” said Coffey, who’s hit 66 percent of his FGs at UI.

Until junior high, Coffey’s football background was minimal, if not nonexistent. For six years as a child, he lived in the London area, and in a north England town called Milton Keynes. Coffey’s father, Travis (who is a former UI safety), worked in telecommunication sales there.

In turn, Coffey morphed into a wall of a goalkeeper, who’s still prone to binge watch Premier League soccer, and never misses a Manchester United match.

“I loved visiting new places all the time. Every summer, we’d go to Portugal for a week or two,” he said. “I wanna head over again and see some old friends.”

Not long after his return to northern Idaho, Coffey opted to try his leg at football, and he ended up a two-sport fall athlete at Lakeland — a Class 4A Inland Empire League goalie of the year, and an all-state kicker/punter who once made a 57-yarder.

UI offensive coordinator Kris Cinkovich had been watching for two years, and had an offer lined up for Coffey to continue the Vandals’ kicking legacy. Coffey now is a UI graduate with a degree in finance, with one final year to realize his pro prospects.

“It’s weird to think this is my last year,” he said. “The last couple years have flown by.

“I’d love to get an opportunity at the next level. If it happens, great. If not, I still was able to attend a great school that I’ll always stay involved with.”

Coffey doesn’t altogether embody the traditional specialist M.O. He’s laid-back, for sure, yet not a recluse. He “locks in” on third downs, and stays loose by intermingling with his teammates on the sideline.

But he might think back on his alone time — those secluded pasture kicking sessions — if football commences in a presumably quiet Dome.