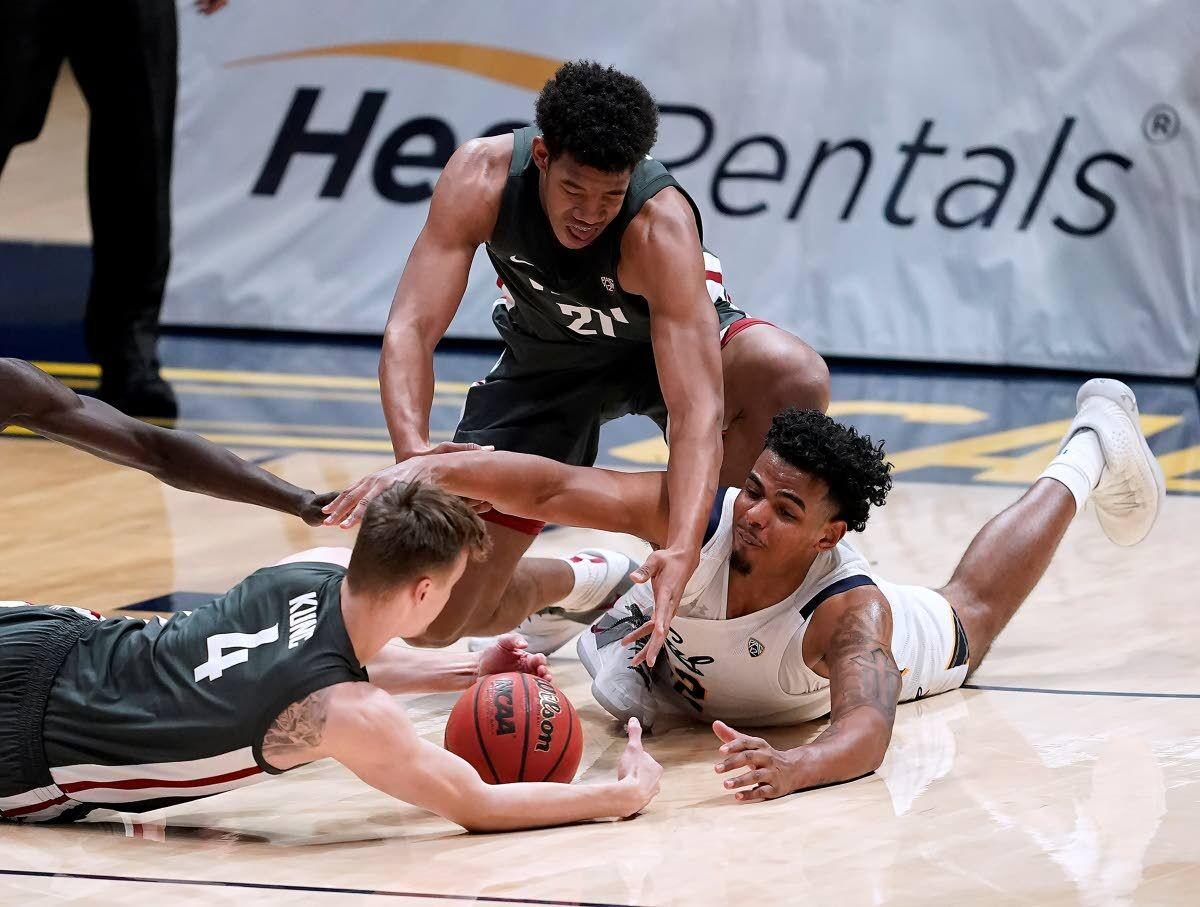 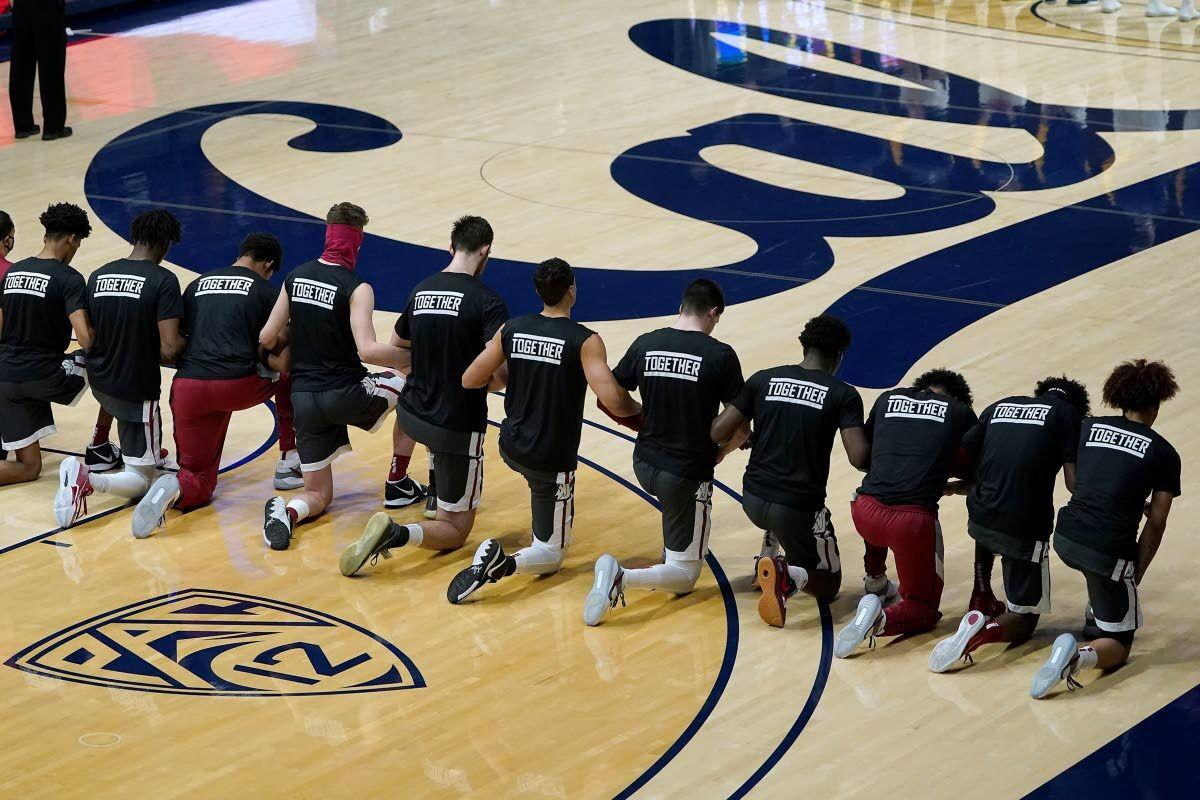 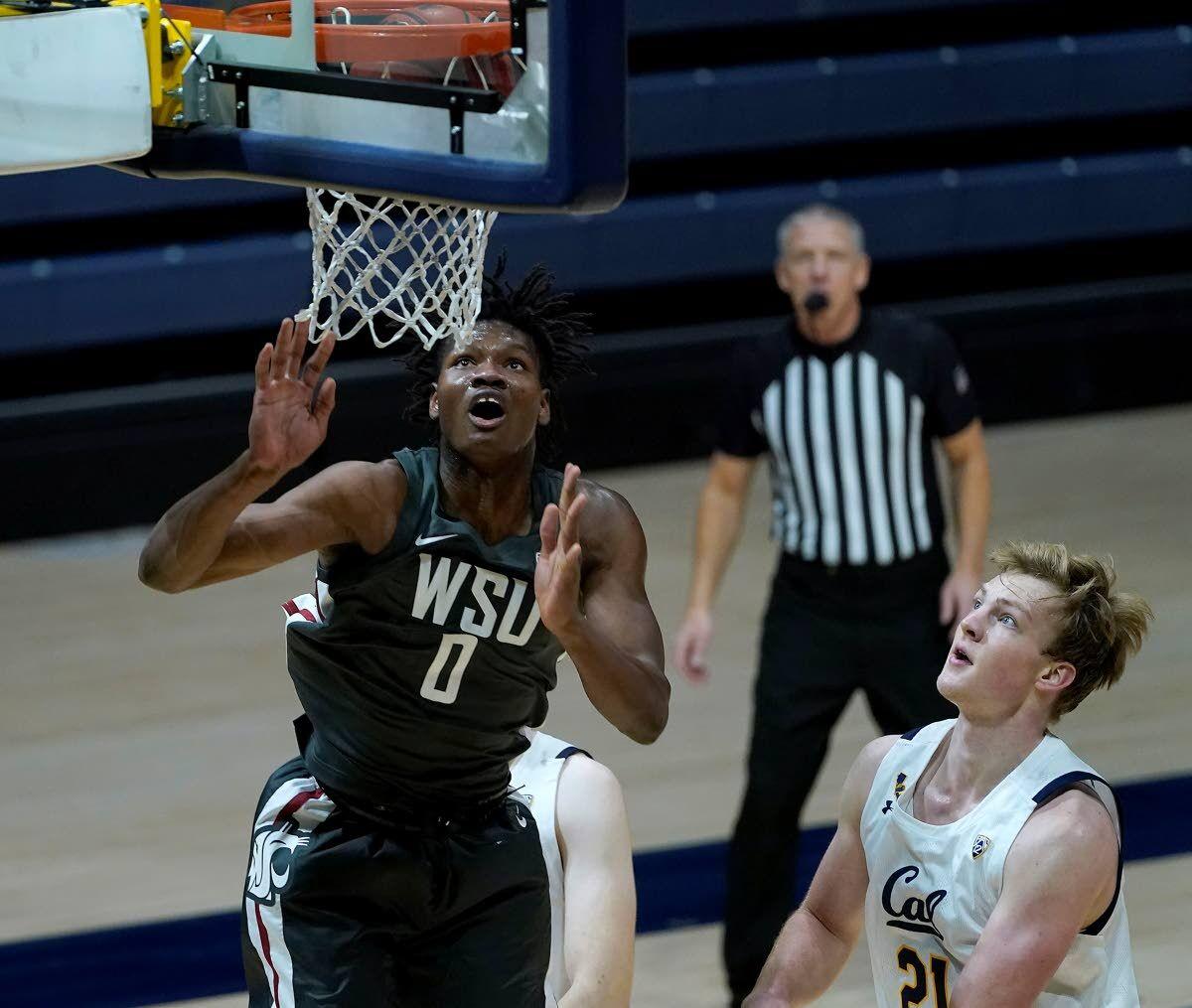 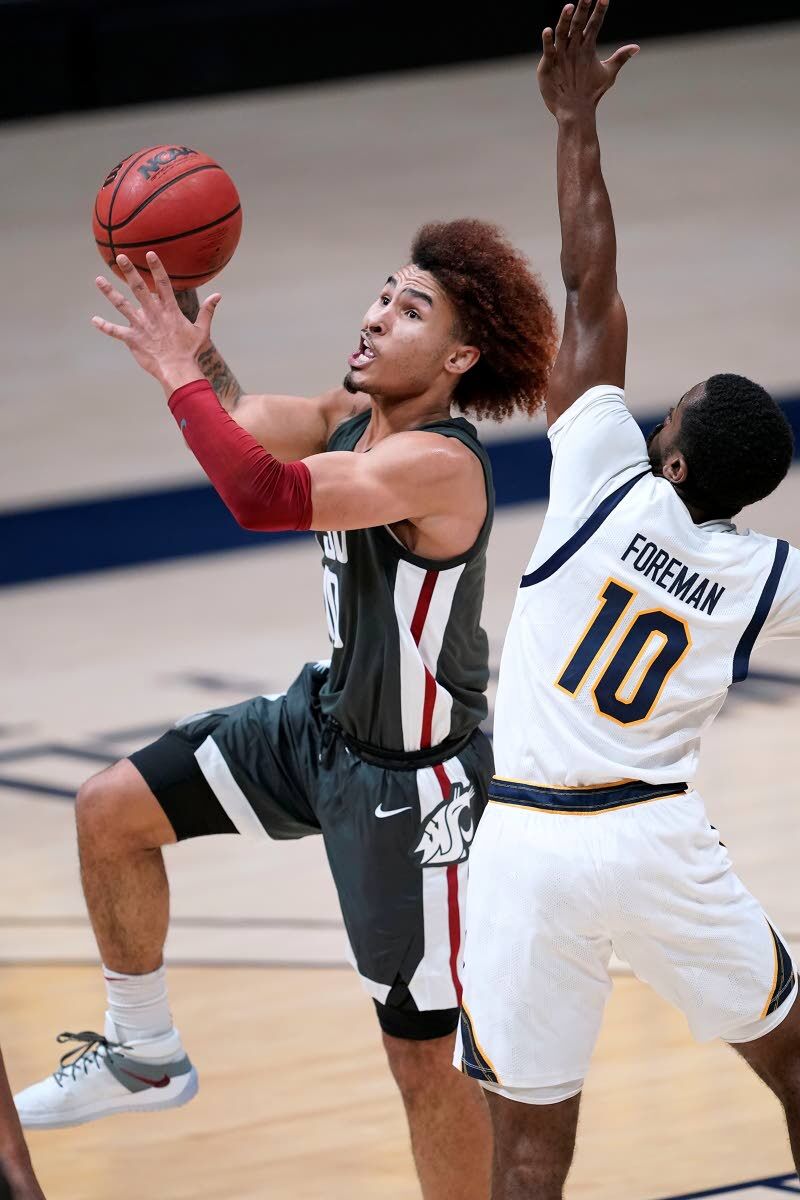 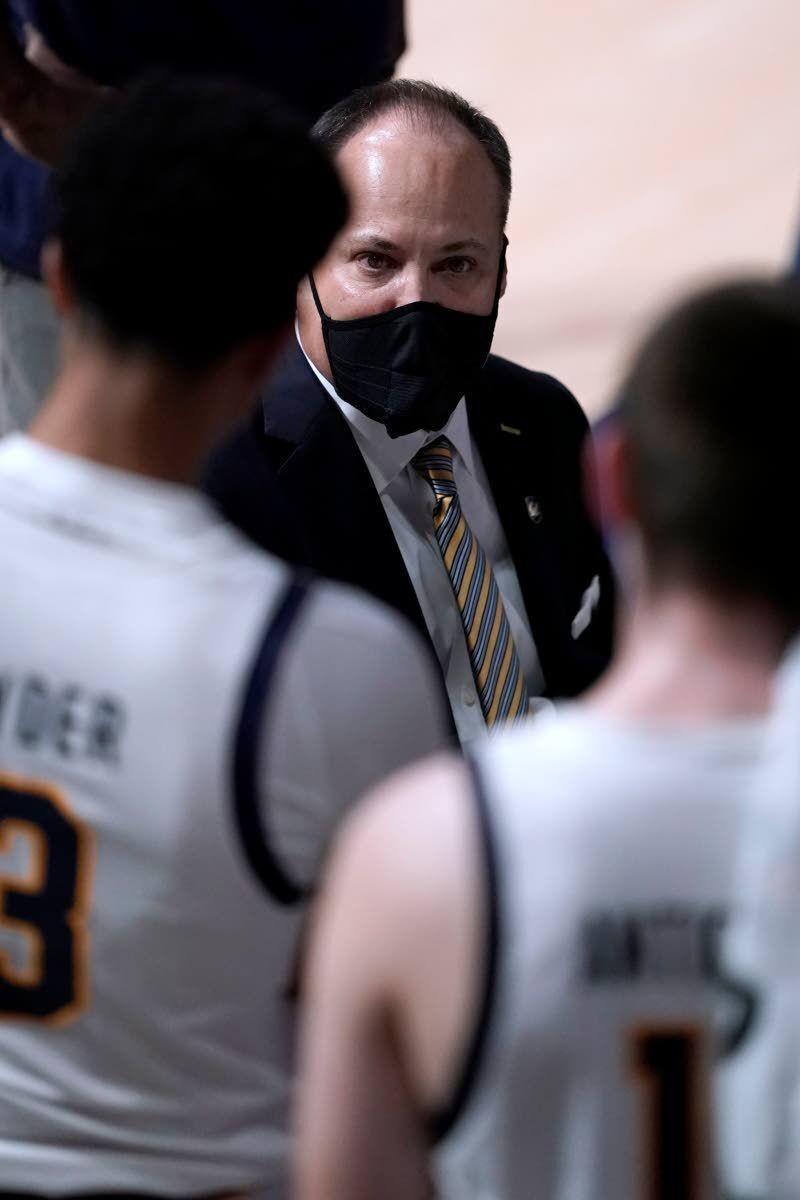 California head coach Mark Fox talks to his players during a timeout against Washington State in the first half of an NCAA college basketball game, Thursday, Jan. 7, 2021, in Berkeley, Calif. (AP Photo/Tony Avelar) 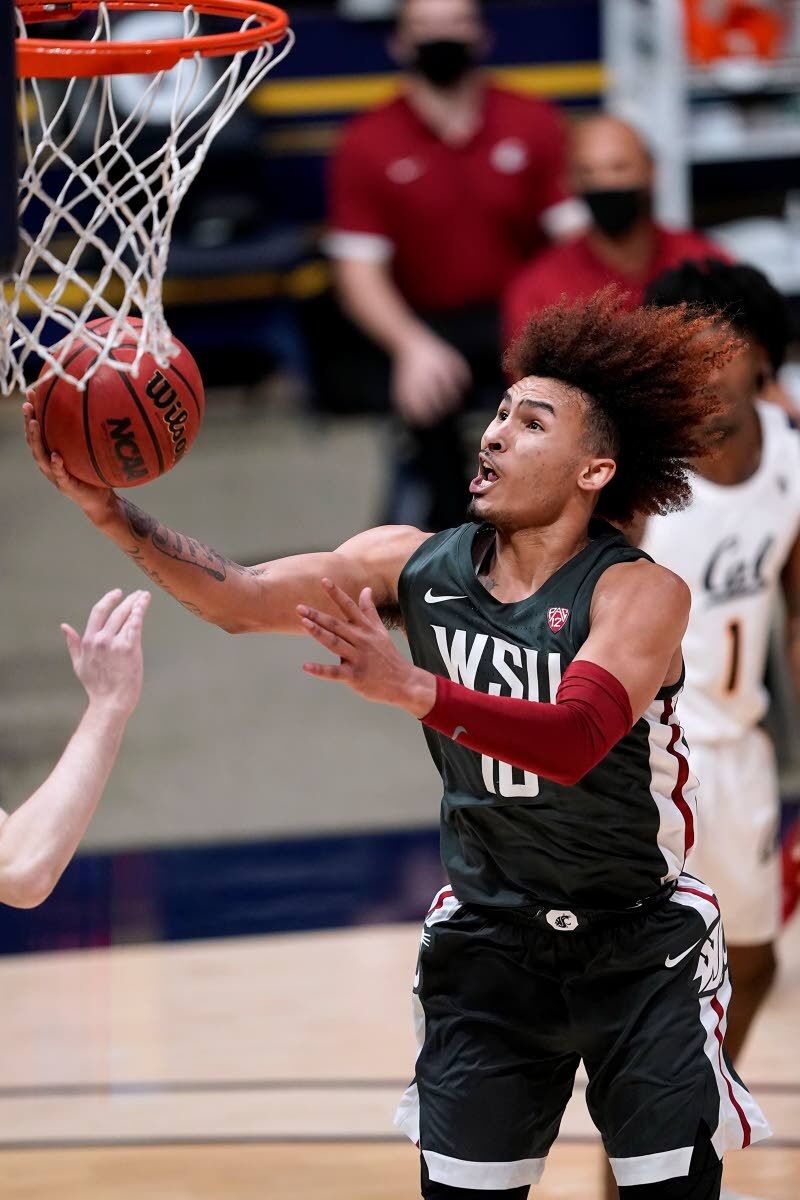 Washington State guard Isaac Bonton (10) drives with the ball against California during the second half of an NCAA college basketball game, Thursday, Jan. 7, 2021, in Berkeley, Calif. (AP Photo/Tony Avelar) 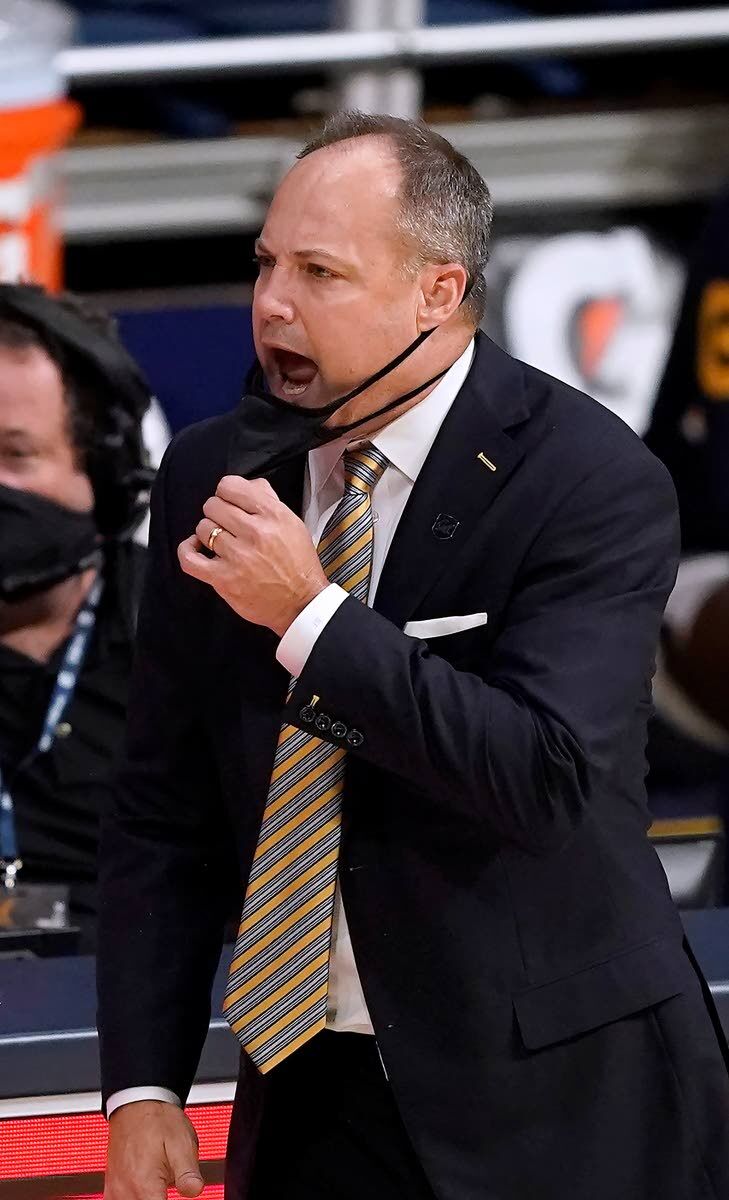 California coach Mark Fox yells to his players during the second half against Washington State in an NCAA college basketball game Thursday, Jan. 7, 2021, in Berkeley, Calif. (AP Photo/Tony Avelar) 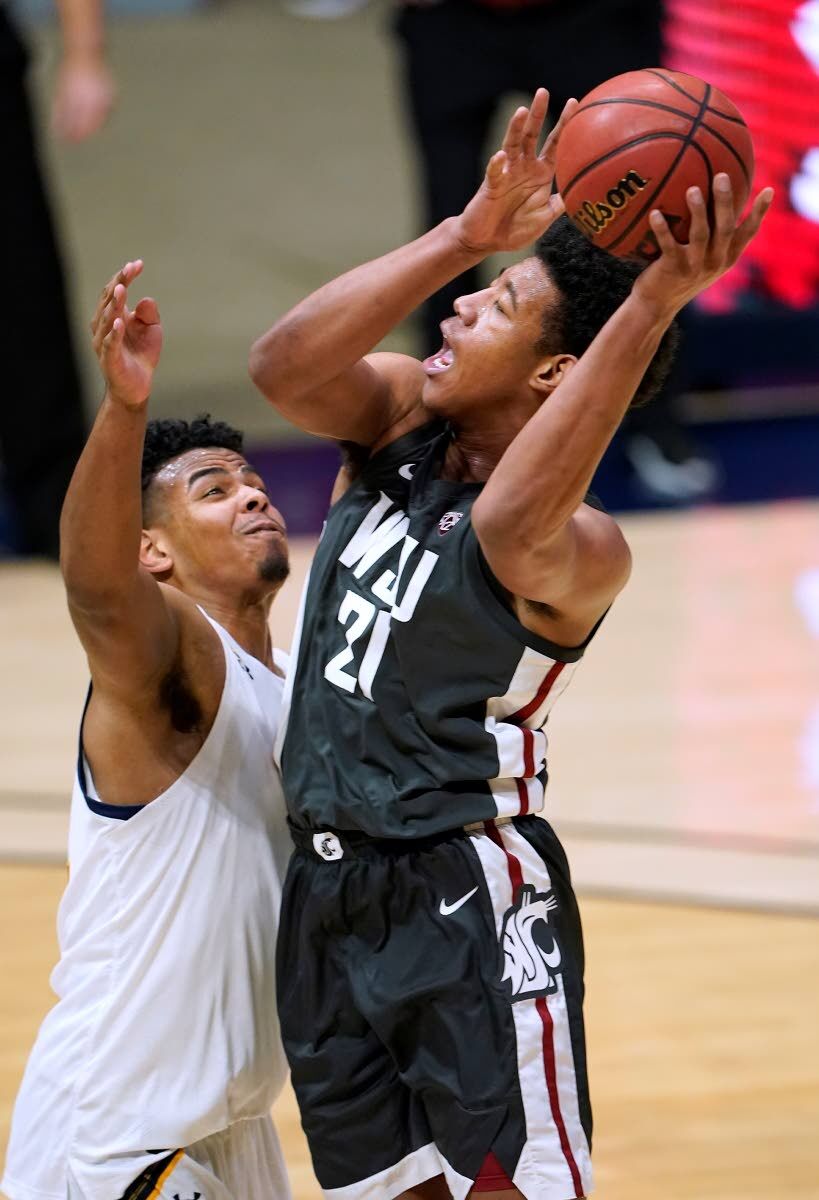 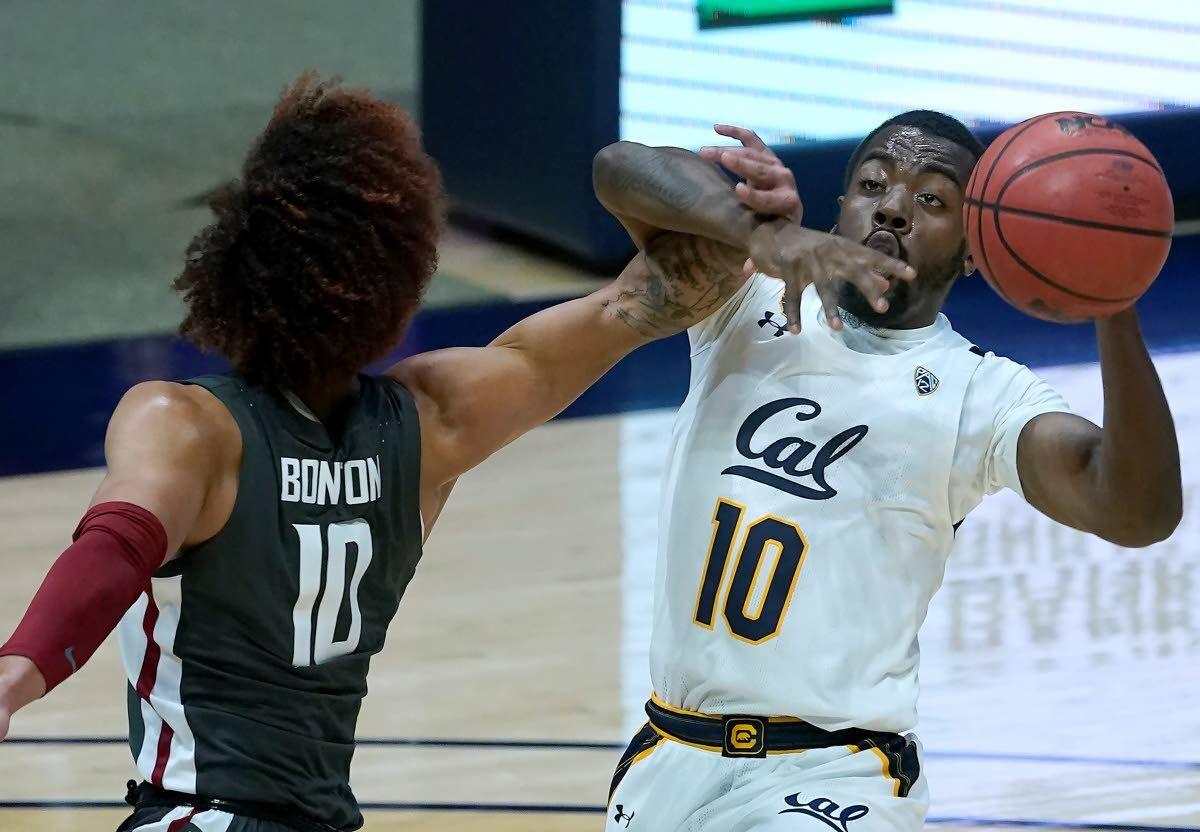 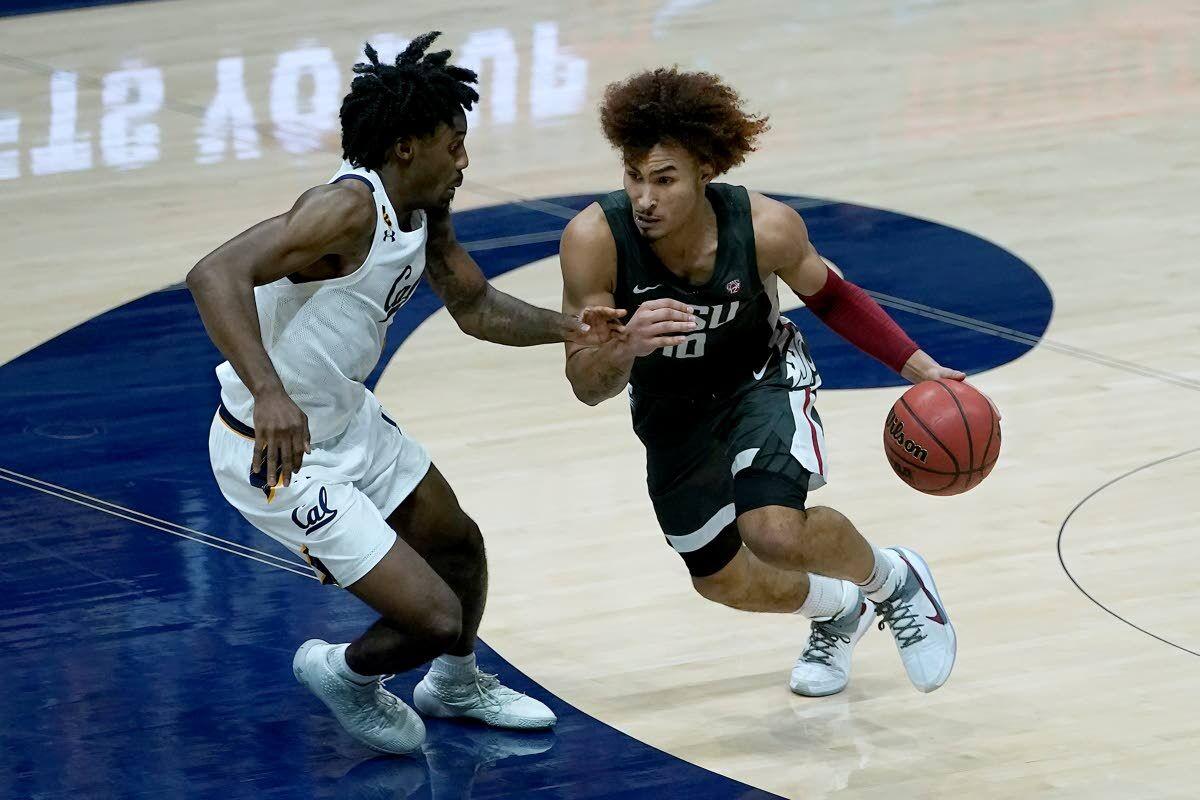 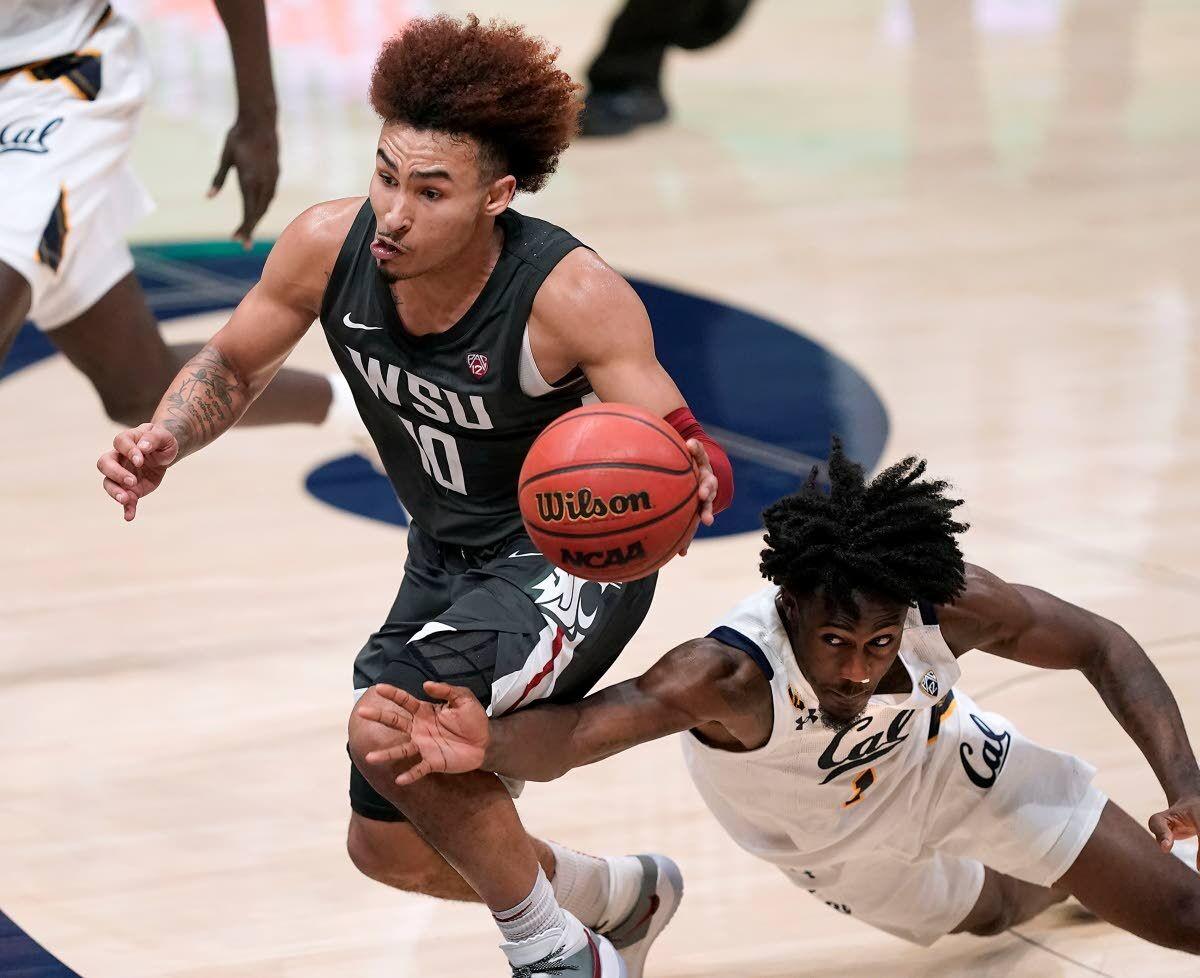 California head coach Mark Fox talks to his players during a timeout against Washington State in the first half of an NCAA college basketball game, Thursday, Jan. 7, 2021, in Berkeley, Calif. (AP Photo/Tony Avelar)

Washington State guard Isaac Bonton (10) drives with the ball against California during the second half of an NCAA college basketball game, Thursday, Jan. 7, 2021, in Berkeley, Calif. (AP Photo/Tony Avelar)

California coach Mark Fox yells to his players during the second half against Washington State in an NCAA college basketball game Thursday, Jan. 7, 2021, in Berkeley, Calif. (AP Photo/Tony Avelar)

In its first game of the season outside Pullman, Washington State gave itself a shot of confidence.

Brushing off a jittery first half, the Cougar men’s basketball team got sizzling-hot for a long stretch after the break. Wazzu remained collected, preserving a big advantage well enough to prove it could win handily on the road — against a Pac-12 opponent too.

The Cougs cruised past California 71-60 on Thursday at Haas Pavilion in Berkeley, Calif., to collect their second conference away win since second-year coach Kyle Smith took the reins.

“Going on the road and beating any team, like coach Smith says, it’s big for us, especially being a younger team and everything,” senior point guard Isaac Bonton said. “That was a big boost. We needed this win.”

For approximately 10 minutes in the second half, WSU (9-1, 2-1) perhaps was more dialed in than it’d been this year.

The Cougars were aggressive, attacking the basket repeatedly en route to a game-high 15-point lead that the Golden Bears (5-7, 0-5) chipped away at, but not enough to fully retort.

“We took a couple of shots away from them, hung in there and got that thing done,” Smith said.

The visitors dominated the glass 45-28 and hit their free throws down the stretch after a disappointing showing on that end their last time out — when they went 19-for-37 in a double-overtime loss Saturday to Arizona.

“There were a lot of guys in the gym shooting free throws after that one,” said Bonton, whose team shot 18-for-23 from the foul line against Cal.

Bonton led the way in his most efficient game of the year, which Smith called “close to flawless.” He racked up 22 points on 7-for-11 shooting, and added six assists and five rebounds.

“To have that kind of two-way player that can run the point, guard their best player and give you 20 points ... that’s just a great game,” Smith said.

Freshman post Efe Abogidi tallied 12 points and nine boards, and rattled in 3-of-4 from 3-point land — he hit back-to-back 3s to kick off the second half.

Sophomore guard Noah Williams scored all 11 of his points after intermission and 7-footer Volodymyr Markovetskyy — returning from the COVID-19 list — was disruptive inside, finishing with seven points and eight rebounds.

Wazzu, which leads the nation in field-goal percentage defense (34.215) limited Cal to 34.5 percent from the floor and 5-for-21 from distance. The Cougars shot 44 percent.

A physical Bears team that prides itself on post play and bruised WSU last year in that regard was largely outworked underneath by a Coug frontcourt featuring newfound size.

Abogidi’s back-to-back 3s were followed by consecutive Bonton drives and gliding scoop layups. A fadeaway 2 off a spin from Bonton and a reverse layin from Williams capped an 8-0 spurt that ended with WSU up 51-36 with 10:31 to play.

Cal was held without a point for four minutes during the onslaught. From there, WSU responded to any ounce of Bear momentum, and didn’t let its lead slip. A Jalen Celestine 3 with under two minutes remaining cut it to seven, but it got no closer.

Wazzu entered halftime leading 31-28 despite committing 11 of its 15 giveaways in the first — the Cougs’ most turnovers in a half this season. WSU used a late 15-2 run to gain the edge in a first half full of sharp defense.

“I think some of it was just nerves on the road,” Smith said. “... We addressed it at halftime and they did a really good job of digging in.”

Forward Andre Kelly posted 11 points, and 7-footer Lars Thiemann and guard Ryan Betley had 10 apiece for Cal, which was missing its leading scorer (and best player) in guard Matt Bradley. The Bears returned standout forward Grant Anticevich, who’d missed their previous four games with an injury. He was held to nine points.

“Really gutty win. It was gonna be a tough first road game, and obviously they’re missing their leading scorer who’s an all-league player ... but I thought we played well,” Smith said. “I have so much respect for Cal’s program and the way they play. They play hard.

“There’s a confidence when you get that done — we can do it on the road.”