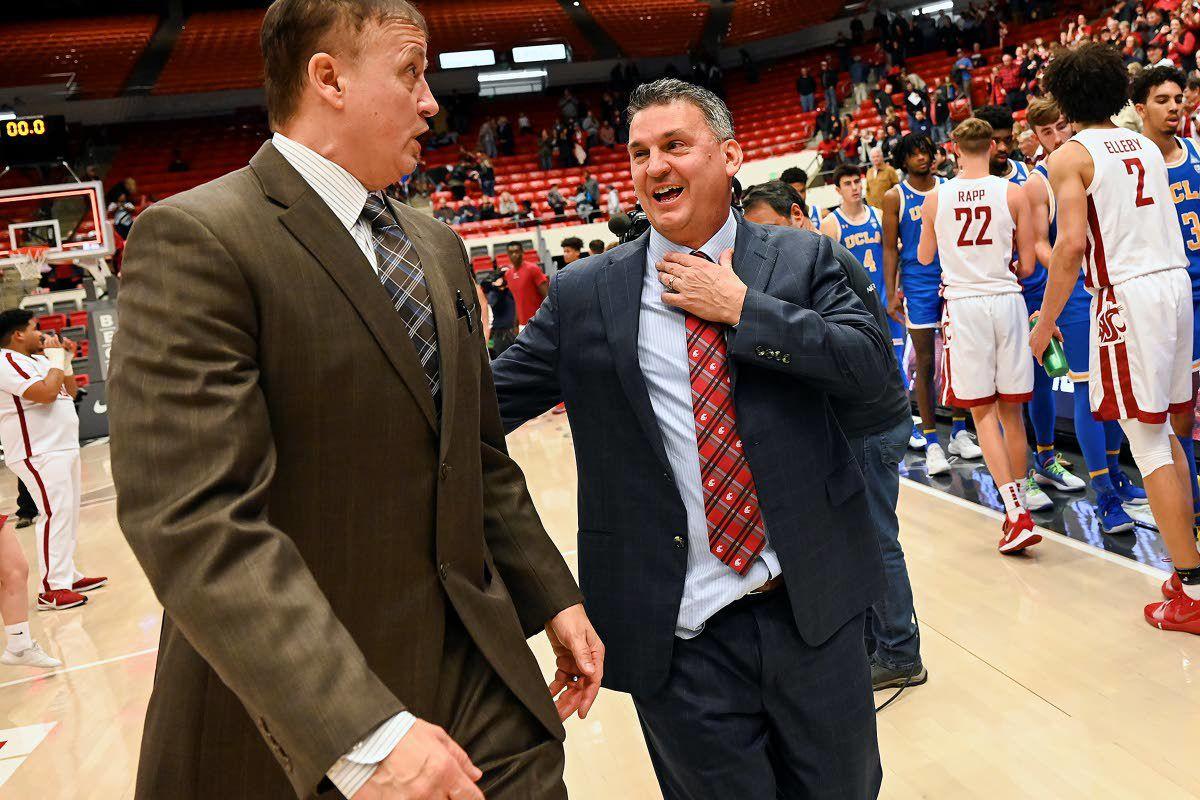 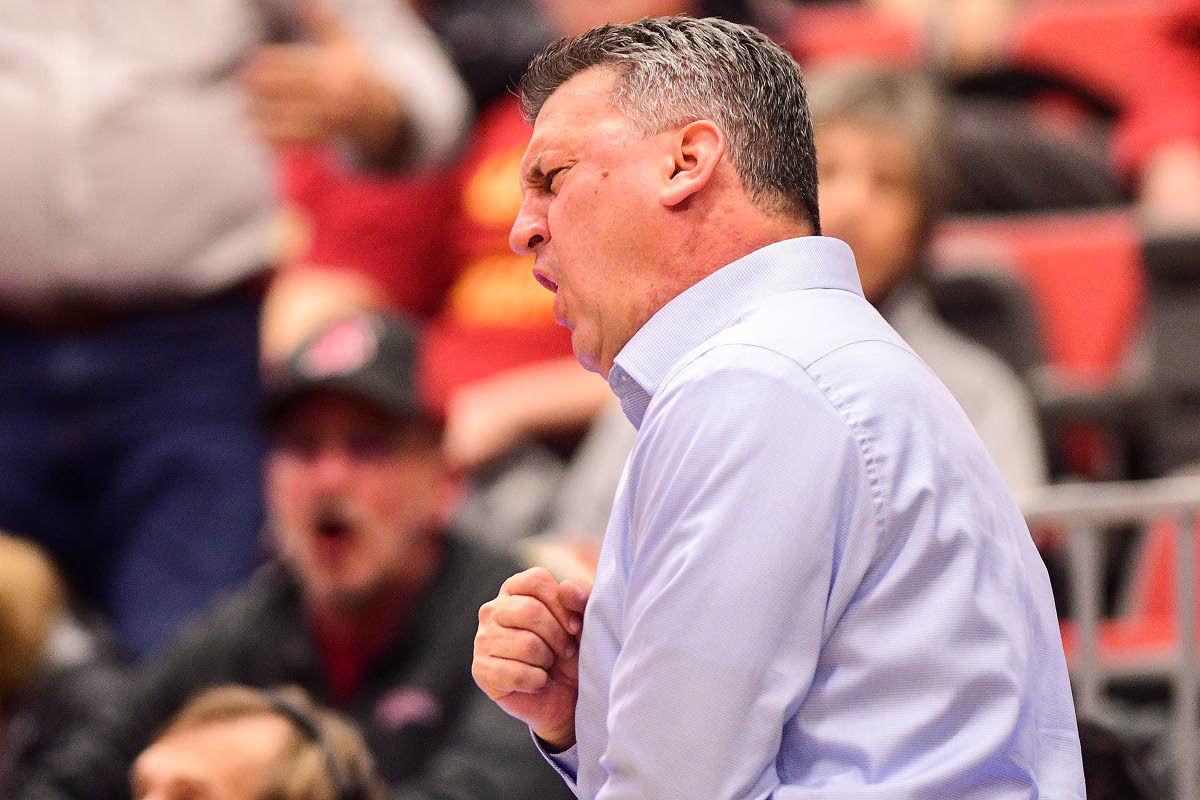 Washington State head coach Kyle Smith reacts after a charge was called on forward Tony Miller (32) during the second half of a Pac-12 Conference basketball game on Tuesday night at Beasley Coliseum in Pullman.

Washington State head coach Kyle Smith reacts after a charge was called on forward Tony Miller (32) during the second half of a Pac-12 Conference basketball game on Tuesday night at Beasley Coliseum in Pullman.

Washington State coach Kyle Smith has given his men’s basketball team incentive, and therefore has gotten his Cougars to believe they can hold up against Pac-12 opponents, many of which have a distinct advantage in their size, and in the caliber of their recruits.

In accordance, Smith’s team has given fans reason to show up, and it’s only early in Year 1.

The Cougars (10-5, 1-1 Pac-12) lean on their revamped defense, that much is clear. Their motivation? A team-building device Smith picked up in rebuilding Ivy League Columbia in the early-to-mid 2010s, then instituted again during a defensive revival at San Francisco (2016-19).

It’s about the “kills” — those being accrued by way of three consecutive defensive stops.

“That’s one of our really rudimentary analytics. I don’t really wanna share that, but it’s fine, it’s out there,” Smith, the data-driven coach, said Tuesday during his weekly news conference. “That’s one of our things our guys can kinda get behind.

“You lose yourself in the team. You’re gonna miss shots, you’re gonna turn it over. Just stay locked in to what we’re doing on the other end.”

It’s propped up enthusiasm after initial uncertainty, stemming from a drab past few years on defense, and the questions that might arise with a new coach in charge. Smith’s seen his bench get ­involved, many of its players often throwing up an “X” after WSU prevents its opponents any scoring on back-to-back-to-back possessions.

“We’ve had different ways — had a skull and crossbones up there,” Smith said of his past teams. “Kind of like a strikeout in a baseball game, throw the K up.

In the Cougars’ come-from-behind overtime win Saturday against UCLA, they compiled “seven or eight,” which surpasses the preferred mark of at least six per game.

“It’s hard to do, to go over six,” Smith said. “Obviously, there was five more minutes, but to be able to do that — because it’s hard to get a clean stop, three in a row without free throws or baskets — that’s great.”

“Kills,” several of them including takeaways, have gifted reprieve to what’s been a troubled Cougar offense. WSU shot 27.8 percent from the field against USC, but forced 20 turnovers, had 34 more attempts than the Trojans, and never was down for the count until the final minute.

“Kills” let Wazzu fire back against the Bruins after it shot 20.8 percent in the first half and trailed by 11 points midway through the second. Then came an offensive burst led by formerly struggling guard Isaac Bonton, and some late-game heroics from forward CJ Elleby, who’d been broadly contained on offense by the two L.A. foes.

Wazzu was blown out by UCLA last year, and handled neatly by USC. Both of those teams are risers in the Pac-12, and the Bruins recently topped Washington.

If the offense is as consistent as it was down the stretch against UCLA, the Cougars will be far from a league doormat. Smith’s hoping the trend continues when his team meets Cal at 7:30 p.m. today in Berkeley before playing at 3 p.m. Saturday at Stanford.

“The first three halves, we were really struggling offensively, we couldn’t really calm ourselves down,” said Smith, whose team ranks 102nd nationally in defensive efficiency, according to Kenpom. WSU came in at 284th at the end of last year.

“But we were competing so hard on the other end, it kept us in the game both times.

“As a coach, you’ll see, when you’re competing, you can’t make a shot, and you’ll break. Our guys didn’t, so we’re really proud and hopefully we can sustain that going forward.”

But WSU’s been greatly buoyed by some players still sitting under the radar. That includes the defensive emergence of Seattleite freshman guard Noah Williams, who Smith has compared to Celtics great Danny Ainge because of his “fearless” play and knack for getting under the skin of his foes. Williams had a clutch, last-minute steal in OT against UCLA.

Montana transfer Tony Miller averaged 13 points and 8.5 rebounds the past two games. Smith announced Tuesday that Miller has been put on scholarship.

“He’s been a really good worker and obviously very productive,” Smith said. “He earned it.”

Bonton, the JC transfer from Casper College (Wyo.), is averaging 13.6 points per game on 32 percent shooting, and continues to defend well. He’d been shooting in the mid-20-percent range for much of the year.

Freshman Ryan Rapp, who’d been injured most of the offseason, got a taste of substantial playing time against UCLA, and provided a scoring spark with a pair of quick layups. DJ Rodman has filled in aptly on defense.

Standout senior forward Jeff Pollard left the USC game early in the first half after taking a shoulder hard to his cheek. Pollard was transported to Pullman Regional Hospital, where a facial fracture came back negative. He returned to the same game for the final 2:25 of play.

Reserve guard Marvin Cannon has been on crutches for the past week with a meniscus injury. Smith said the junior will miss at least two more weeks. Point guard Jaylen Shead returned from injury Saturday and played six minutes.

Smith reprimanded by the league

The Pac-12 reprimanded Smith for comments made during his weekly news conference, which were critical of the conference’s officiating in the Cougs’ loss to USC.

After being asked about Williams' toughness, Smith called into question a no-call when Williams was bulldozed past the baseline and into the seats by Trojan forward Nick Rakocevic during the first half.

“I thought it was kinda a punk move by Rakocevic,” Smith said. “He just kinda kept driving him into the thing. That was terribly officiated. Do I get fined for that? Probably. I don’t know, it was, that’s reality. ... You’re not allowed to push a guy into the stands, and Noah wouldn’t give the ball up.”

In a statement, Pac-12 commissioner Larry Scott — whose league has been openly criticized for its officiating many times before — said the conference “has established rules that prohibit our coaches from publicly commenting about officiating,” and that coaches may “provide feedback directly to the coordinator of officials.”