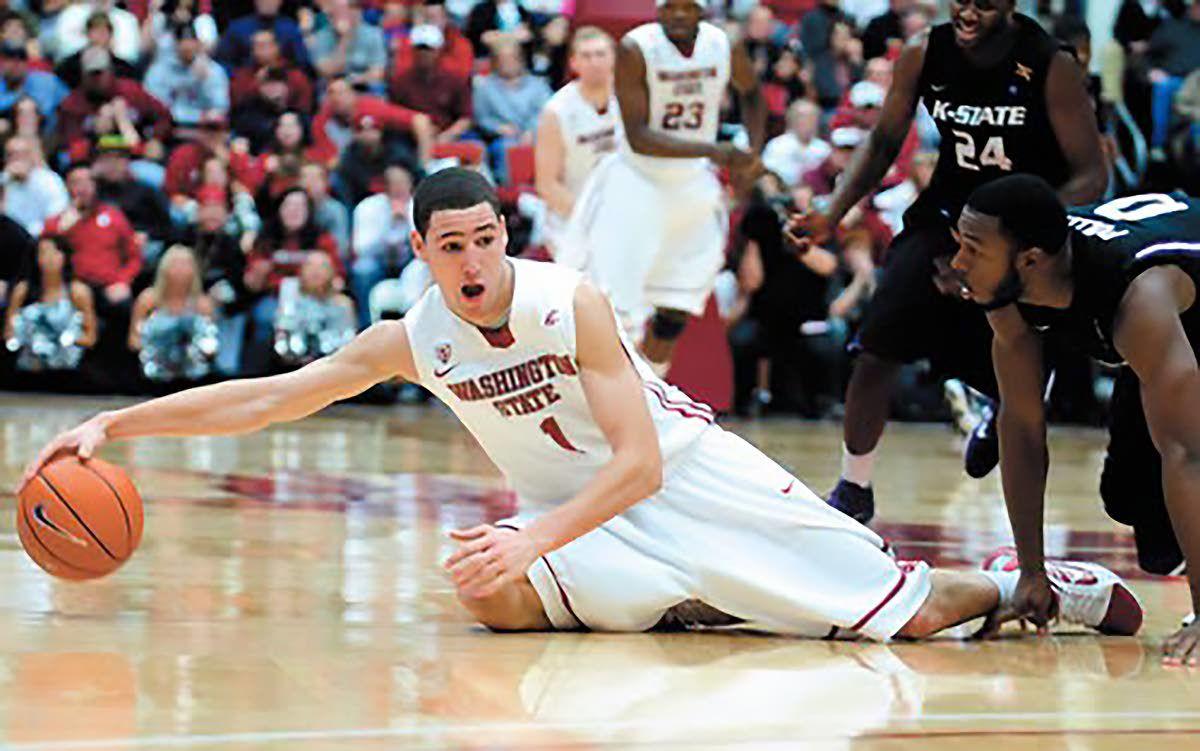 Klay Thompson will have his No. 1 jersey retired at halftime of Saturday’s Washington State-Oregon State game. 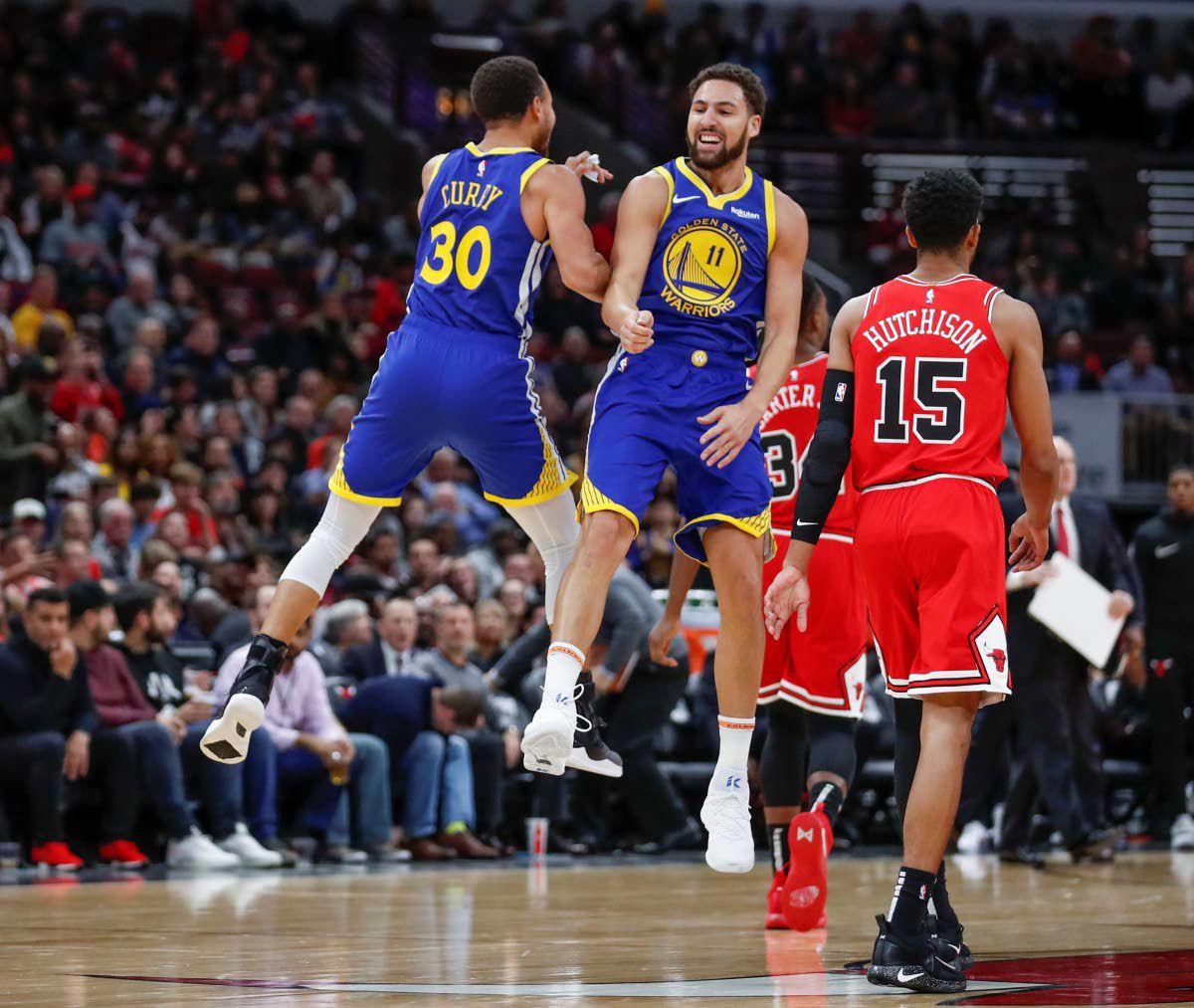 Warriors guard Klay Thompson, center, celebrates with guard Stephen Curry, left, after scoring against the Bulls during a game Oct. 29 in Chicago. 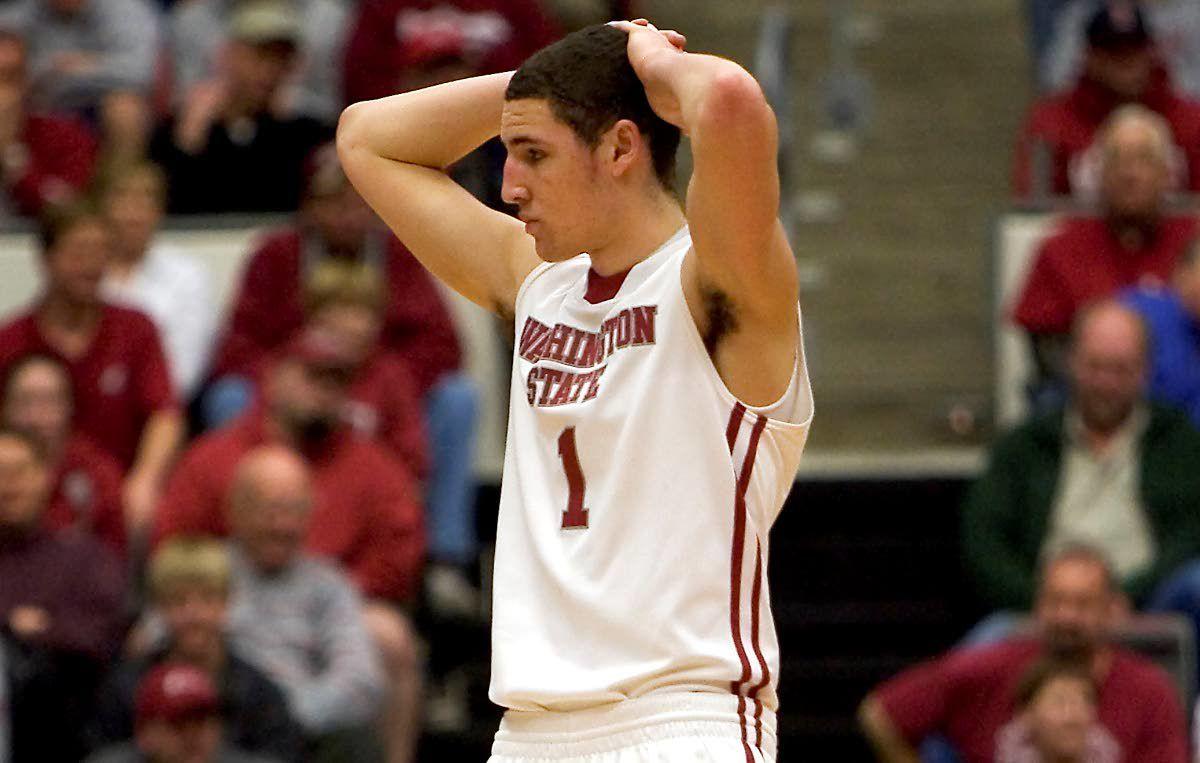 Washington State guard Klay Thompson reacts after missing a shot during the first half of an NCAA college basketball game against USC on Saturday, Feb. 20, 2010, at Beasley Coliseum in Pullman, Wash. Washington State won 51-47. Thompson went 0-12 from the field, and 2-5 from the free throw line. (AP Photo/Dean Hare) 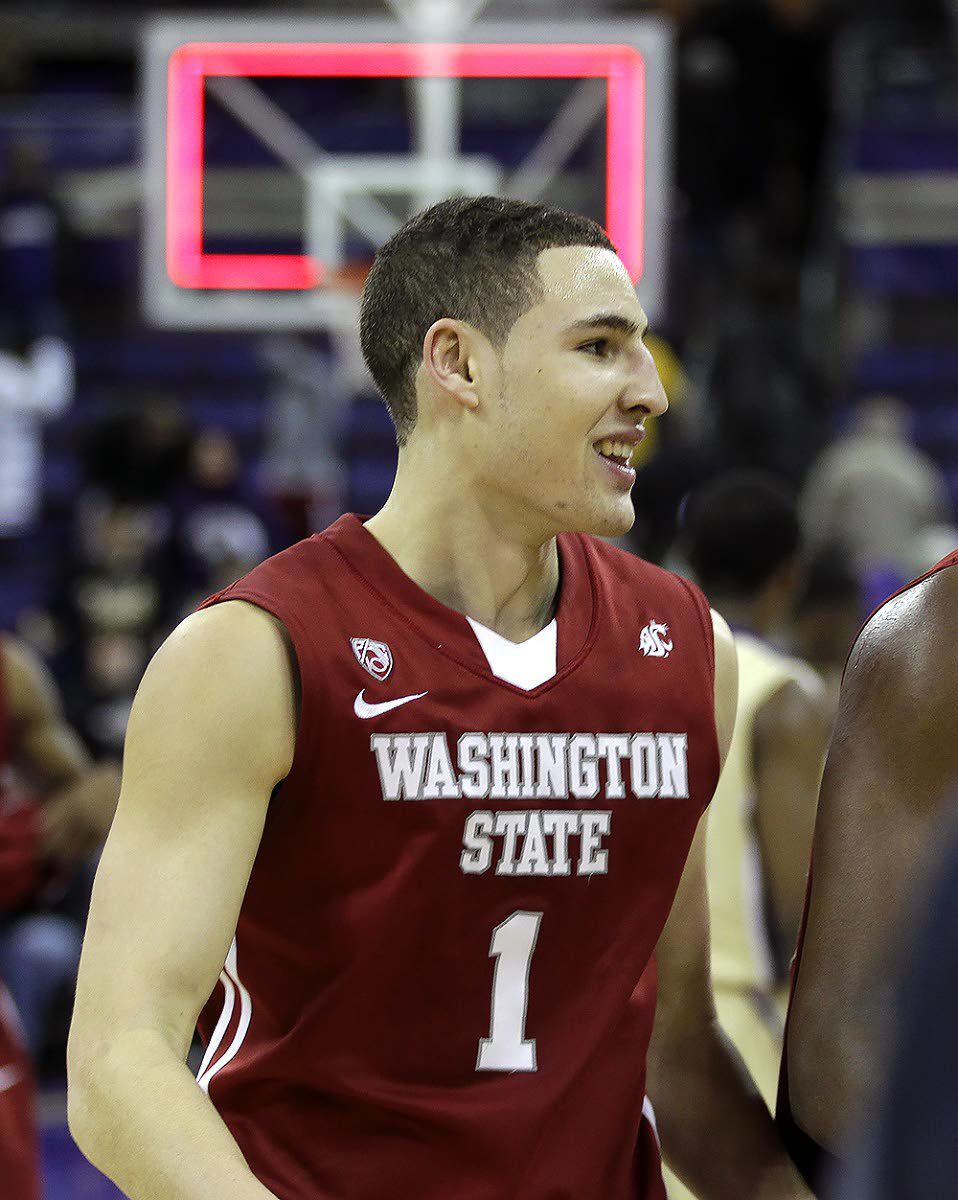 Klay Thompson will have his No. 1 jersey retired at halftime of Saturday’s Washington State-Oregon State game.

Warriors guard Klay Thompson, center, celebrates with guard Stephen Curry, left, after scoring against the Bulls during a game Oct. 29 in Chicago.

Washington State guard Klay Thompson reacts after missing a shot during the first half of an NCAA college basketball game against USC on Saturday, Feb. 20, 2010, at Beasley Coliseum in Pullman, Wash. Washington State won 51-47. Thompson went 0-12 from the field, and 2-5 from the free throw line. (AP Photo/Dean Hare)

During Washington State’s upcoming homestand, Beasley Coliseum will see more star power in one sitting than it probably ever has.

That’s not even in reference to the visitors from Oregon, both of whom are loaded. Much bigger.

Two-way NBA superstar Klay Thompson will be on hand for Saturday’s game against Oregon State (1 p.m., Pac-12 Network) to watch his No. 1 Cougars jersey lifted to the rafters.

Joining him for the festivities is Golden State backcourt mate Stephen Curry, a global hoops phenomenon. For company, the two 3-point maestros and three-time NBA champs are bringing along NBA antihero center Zaza Pachulia, and Mike Dunleavy, the Warriors’ assistant GM — as confirmed by the Associated Press.

There’s a lot of notoriety coming this weekend, and in accordance, an expected healthy draw to a venue that hasn’t neared a sellout since Thompson’s final season in crimson and gray (2010-11).

Coach Kyle Smith said Tuesday he’s seriously considering shutting down point guard Jaylen Shead, who got some playing time during two losses in the Bay Area last week, but has struggled with a chronic hip injury since early this year.

“Mentally, I’m kinda moving that direction until we get more resolved,” Smith said. “I think he’s just given a great effort. That hip has bothered him quite a bit, where he can’t help it.”

In addition, lengthy guard Marvin Cannon “might be back in three, four weeks” after suffering a meniscus injury in December, and key-contributing post Tony Miller still is fighting through an ankle injury that kept him sidelined in WSU’s 88-62 loss Saturday to Stanford.

Starting guard Isaac Bonton has been consistently nicked up, but available. The same goes for backup guard Ryan Rapp. That production deficiency has prompted Smith to reassess the situation.

“We were definitely a slower team (in losses to Cal and Stanford last week),” Smith said. “(Before), we were quick and able to really extend defensively, pressure-wise. You can play a lot harder when you got depth. We had a good, solid nine guys and the personality of that team — with Noah (Williams), Jaylen, Marvin, Tony — makes you quick.

“We were just generating offense with our defense, pretty good. I’d be lying if I said (injuries don’t) affect us.”

Against the Ducks, who boast the country’s No. 6 offense, according to the KenPom rankings, WSU will tinker with a tighter rotation, featuring only seven or eight, meaning each player will need to log about 30 minutes.

“That’s a challenge. We’ll try to figure it out,” Smith said.

The first-year Cougs coach hasn’t really had a cemented lineup all season. It’s just another bump in the road heading into perhaps the program’s biggest weekend in recent memory.

For Smith, Wazzu must “get back to basics” and “rein in defensively.” It’s basically a rebuild within a rebuild, and probably not the ideal time for it.

“Get back to where we can get some stops,” said Smith, whose team sits 48th in turnovers forced per game two weeks after it was top 10. “Probably won’t turn people over as much ... concentrate with keeping people in front and defensive rebounding.”

Leading scorers CJ Elleby (18.4 points per game, 6.7 rebounds) and Bonton (13.5 ppg) have soldiered on, despite hit-and-miss offensive starts to league play for them.

But both have been key elsewhere. Elleby’s bread and butter is forcing takeaways. Smith also has commended him for battling relentlessly on the glass. Bonton has been a mostly reliable defender up top, where today he’ll be tasked with Oregon’s Payton Pritchard, ESPN’s second-ranked player in the Pac-12 in efficiency who Smith likened to a combination of Steve Nash and T.J. McConnell. Bonton and Pritchard played against each other as young athletes in Portland.

Defense-minded guard Noah Williams broke out offensively with a career-high 16 points in a 73-66 loss to Cal. Forward Jeff Pollard (9.5 ppg) continues to grow as a paint defender who’s honed a sneaky scoring touch.

“In a lot of ways, (Pollard’s) been our most important player,” Smith said during his weekly coach’s show, citing Pollard’s coachable, captain-like qualities.

He’s been banked on so far to defend the conference foes’ patented range underneath. He’ll be heavily relied on Saturday to combat the Beavers’ experience with his own, and ward off their 7-footer-laden frontcourt. Senior small forward Tres Tinkle is OSU’s leader at 19.9 points per game. The team’s offense ranks eighth in the country.

Reserve WSU forward Daron Henson will have some expanded frontcourt responsibilities, too. Henson, who only had played in two minutes all season before Saturday, hit four 3-pointers against the Cardinal.

“He’s, if not our best, one of our best shooters,” Smith said of one of his five alternating players who rep at the 4 spot.

It’s been difficult for WSU in the week’s lead-up. Maybe Thompson’s gusto-boosting talk to the team will make the thin Cougs play like stars.

“I don’t care if it’s in the middle of practice, I’ll stop practice and they’ll hang on to every word he has to say,” Smith said.

“Here’s a guy that went to Santa Margarita High School in southern California, his dad was a Laker, but he really took pride in being a Coug. ... He’s just a class act.”

Thompson — a three-year WSU starter, two-time All-Pac-10 player and the school’s No. 3 all-time scorer (1,756 points) — has been poked and prodded this week on what the Palouse means to him. During a Tuesday night news conference, he briefly summed up the environment to a Bay Area press scrum.

“There’s not much out there, some snow at times,” Thompson said.

Then he delved in further.

“But it’s a beautiful place to focus and make relationships that’ll last a lifetime. It allowed me to blossom into the person I am today.”

That being: A five-time NBA All-Star at guard, one of the league’s best-ever shooters and a future Hall of Famer.

Thompson played at WSU from 2008-11, choosing the program over offers from Notre Dame and Michigan. He elected to leave the school after his junior year.

“I was just drawn to (Pullman) because of the Pac-10 aspect, obviously,” he said.

He said he “worshipped” the conference as a child, and Pullman connected with him because he wanted a “close-knit community” where he could “focus on basketball and academics.

“It’s very unique in Pullman how the majority of the population is your peers, that’s what I really appreciated too,” he said.

The school’s isolation applied as well.

“It motivated you to work hard to improve your professional prospects,” he said. “It’s nice to get away from the grid and the city.”

At halftime against the Beavers, Thompson will have his No. 1 jersey retired.

Thompson, a ninth-year NBA veteran, wouldn’t want it any other way.

“If I could go back and do it again, I’d choose Pullman again every day of the week,” he said.