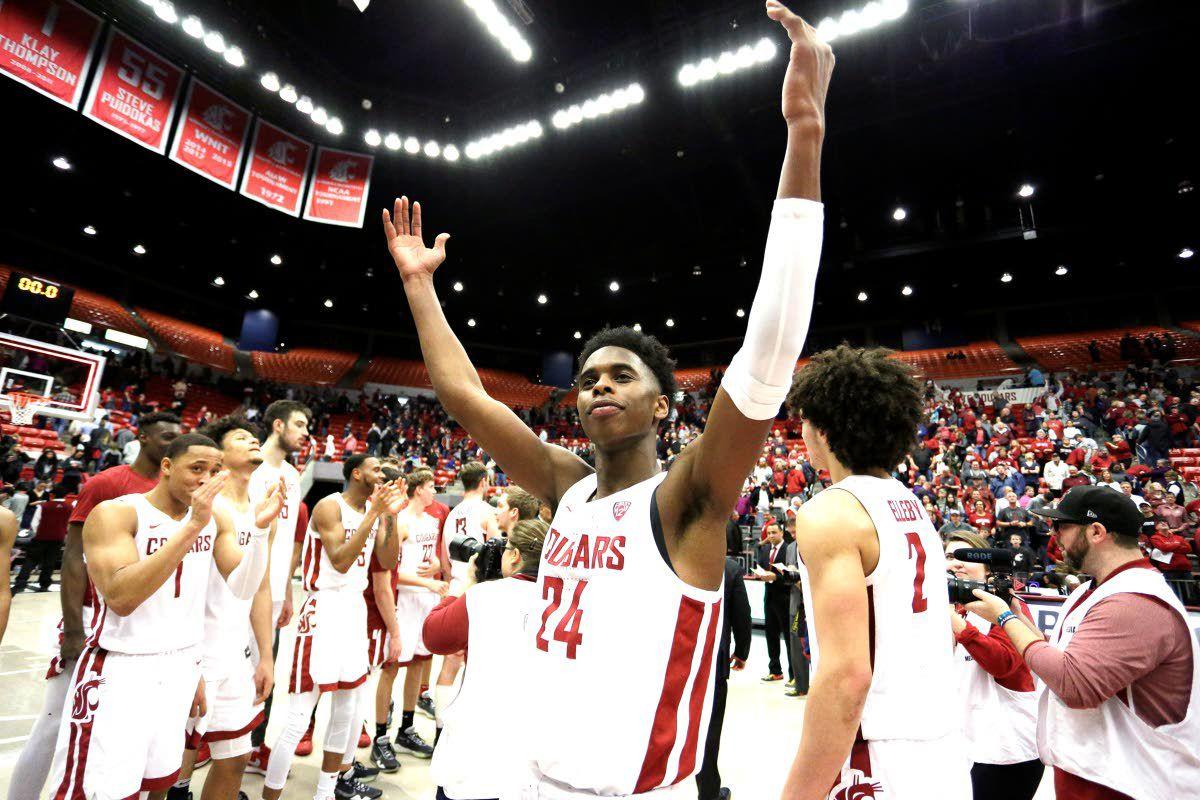 Associated PressWashington State guard Noah Williams (24) and his teammates celebrate the team’s 79-67 win over Washington on Feb. 9 in Pullman. A freshman, Williams established himself as a defensive stalwart for the Cougars this seasona and will return to the team in the fall. 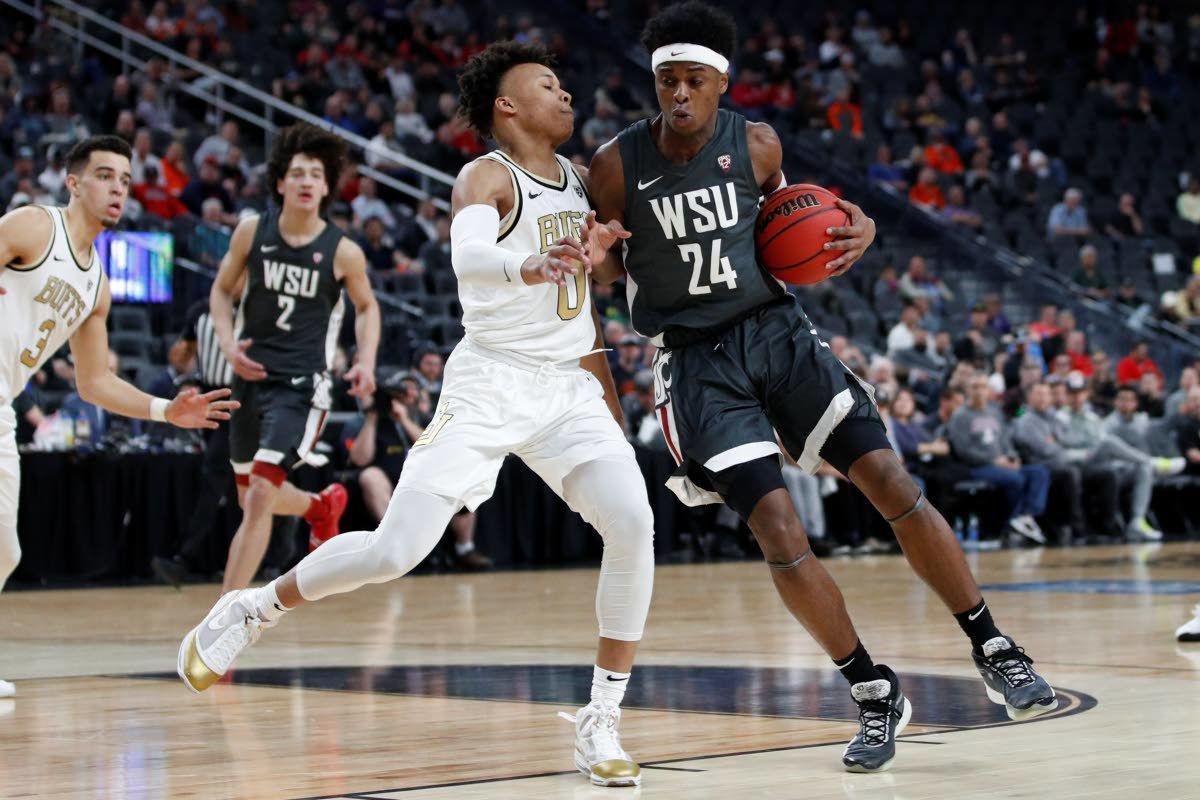 Washington State's Noah Williams (24) drives into Colorado's Shane Gatling (0) during the first half of an NCAA college basketball game in the first round of the Pac-12 men's tournament Wednesday, March 11, 2020, in Las Vegas. (AP Photo/John Locher) 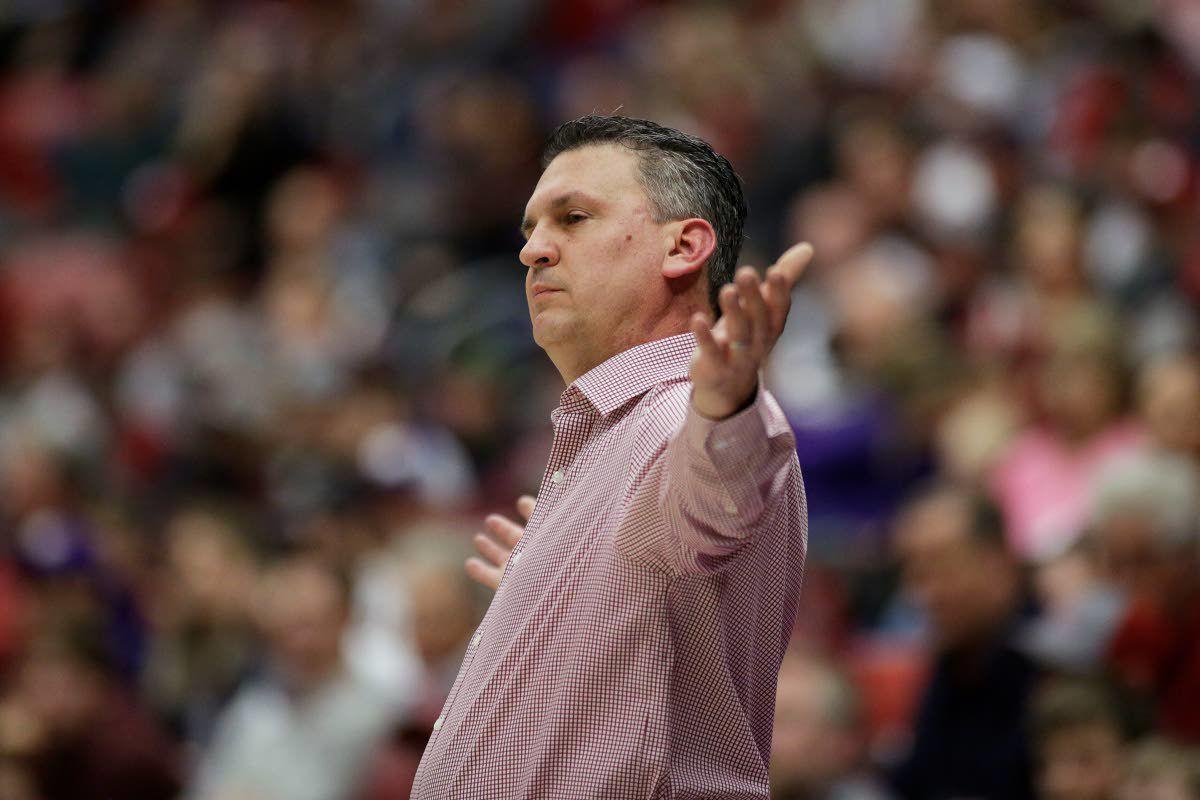 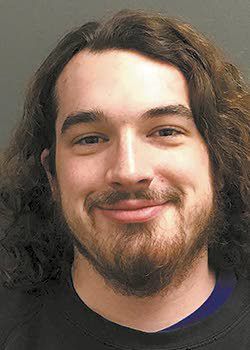 Associated PressWashington State guard Noah Williams (24) and his teammates celebrate the team’s 79-67 win over Washington on Feb. 9 in Pullman. A freshman, Williams established himself as a defensive stalwart for the Cougars this seasona and will return to the team in the fall.

Washington State's Noah Williams (24) drives into Colorado's Shane Gatling (0) during the first half of an NCAA college basketball game in the first round of the Pac-12 men's tournament Wednesday, March 11, 2020, in Las Vegas. (AP Photo/John Locher)

The Cougars bought into what first-year basketball coach Kyle Smith and his new-look staff instilled when they took charge at Washington State a year ago this month.

The Cougs, Smith has said, became replete with pride for their program. It grew alongside their clear chemistry, which developed quickly when considering the roster was about 60 percent different than last year’s.

They made the basketball scene in Pullman fun again — as engaging and encouraging as it’s been since the likes of Klay Thompson and Aron Baynes shared Friel Court at Beasley Coliseum. The two NBA players just so happened to spend some time with Wazzu this season.

They created a local buzz, attracting back the attention of their fan base. The Cougars, who began with uncertainty, finished with a 16-16 record (6-12 in league play), placing 11t h in the solid Pac-12, but showing marked improvement and paving a bright future.

They had to adjust to their new boss from the University of San Francisco, who was hired in March after five-year coach Ernie Kent was fired. Smith turned the Dons’ program around in three years after doing the same at Columbia (2010-16) — a job he earned via a fruitful, nine-year post as a Saint Mary’s (Calif.) assistant.

But first, Smith had to reel in some talent. When he was hired, only three players were included on the roster, thanks to a wave of departures after Kent’s removal.

A couple of months later, Smith had assembled a ragtag group of local recruits, transfers and a few under-the-radar rookie signees.

Smith also helped convince star CJ Elleby to return for his sophomore season after testing the NBA draft waters. He also was key in talking forward Jeff Pollard into exiting the NCAA transfer portal, and spending his final year at WSU.

It didn’t take long for the group to buy into Smith’s charismatic quirkiness, and his blue-collar coaching M.O. — stay defense-oriented, grind for rebounds, close off foes’ perimeter offenses, take care of the ball, etc.

Of most note: Wazzu made a dramatic jump in defensive efficiency (points allowed per 100 possessions), from 314th in the country last year, according to KenPom.com, to 97th. The Cougs cut their turnover margin down from 225th nationally to No. 63. These were emphasized in the preseason by Smith, whose meticulous focus on “hustle stats” such as those earned his style the nickname “Nerdball” in the past.

The prevalence of a streaky offense and overall inconsistency as a young team led to some midseason exhaustion, a slide down the stretch and an overall troublesome road record (2-11). A season-long injury bug was to blame too.

Yet it would’ve been hard to imagine a .500 record given the injuries. Key contributors Tony Miller, at post, and guard Marvin Cannon missed a month each; season-opening starting point guard Jaylen Shead, a Texas State transfer, went down with a hip injury in December and missed the year; Colorado State transfer forward Deion James missed the season with a heart condition, and point guard Isaac Bonton, just when he was starring, sustained a hip injury that sidelined him for three games in February.

But along the way, the Cougars chalked up some breakthroughs.

“They’ve really bought into what we’re trying to do,” Smith said Wednesday. “They’re not gonna be perfect by any stretch ... but we found a few things along the way where we could make a mark.”

Two days later, Thompson returned for his jersey retirement. Before a packed house, Thompson — and Golden State “Splash Brother” Stephen Curry, among other celebrities — rooted on WSU in its comfortable, highlight-stuffed win Jan. 18 against Oregon State. Thompson spoke to the crowd graciously, reflected emotionally on his time in Pullman, and enjoyed every minute of the celebration. It’ll undoubtedly go down as an all-time occasion in program history.

Wazzu swept Washington for the first time in three years, assembling a pair of fiery, memorable outings. Celebrated former coach George Raveling (1972-83) inspired the Cougars and their Beasley assembly with pregame and halftime speeches, and stood and implored the fans to cheer, inciting a late spurt during the Coug victory Feb. 9 against the hated Huskies.

Freshman Seattle native Noah Williams capped off the road win against Washington on Feb. 28 by hitting the clinching free throws, then letting a hostile crowd know, “This is my city.”

Then on Wednesday, No. 11 seed Wazzu blew sixth-seeded Colorado out of the water 82-68, dominating from start to finish at the Pac-12 tournament in Las Vegas — the Cougs’ first conference tournament victory since Tony Bennett’s team beat Kent’s Oregon Ducks in 2009.

“It’s for our program. I think it means more to guys like Aron Baynes (who spoke with the Cougs during their Arizona trip), (former guard) Taylor Rochestie, Klay Thompson, George Raveling,” Smith said. “Pullman’s special. The people there are proud of their Cougs. It’s good to reward them with a win.”

Unfortunately, because of concerns with the coronavirus, WSU didn’t get a shot at Arizona State — a team it’d beaten once before — in the quarterfinal round, ending early a season that put the Cougs back on the map. It featured their best record since 2011-12, when they went 19-18, and their first postseason invitation since that same year. Both times, the they were invited to the College Basketball Invitational, but it was canceled this season.

These Cougars changed the direction of their program. All-league Seattleite forward Elleby was a double-double machine who could score in any manner (18 points per game) and oftentimes put games on his shoulders. Williams was tabbed a “warrior” by Smith countless times for his “fearlessness” and defensive dexterity. Portland native Bonton, a hard-working Casper College (Wyo.) transfer, overcame early offensive struggles to emerge as a second-option scorer and easily the team’s best passer. The northwest trio — which could be broken up if Elleby enters the NBA draft — had palpable chemistry on the court and in lively interviews.

Seniors Jervae Robinson and Pollard were workhorses, especially on defense. Smith said Robinson, who always covered opponents’ toughest guards, showed more growth throughout the season than any player he’s coached. Pollard, a fundamental post from Utah, was a cool and collected captain, who persevered through a bulk of injuries, and played the conference tournament game with a broken finger.

Under a bright first-year coach who the Pullman community accepted with open arms, these Cougs fully bought in to the system and each other, establishing pride for a program that’s trending upward.