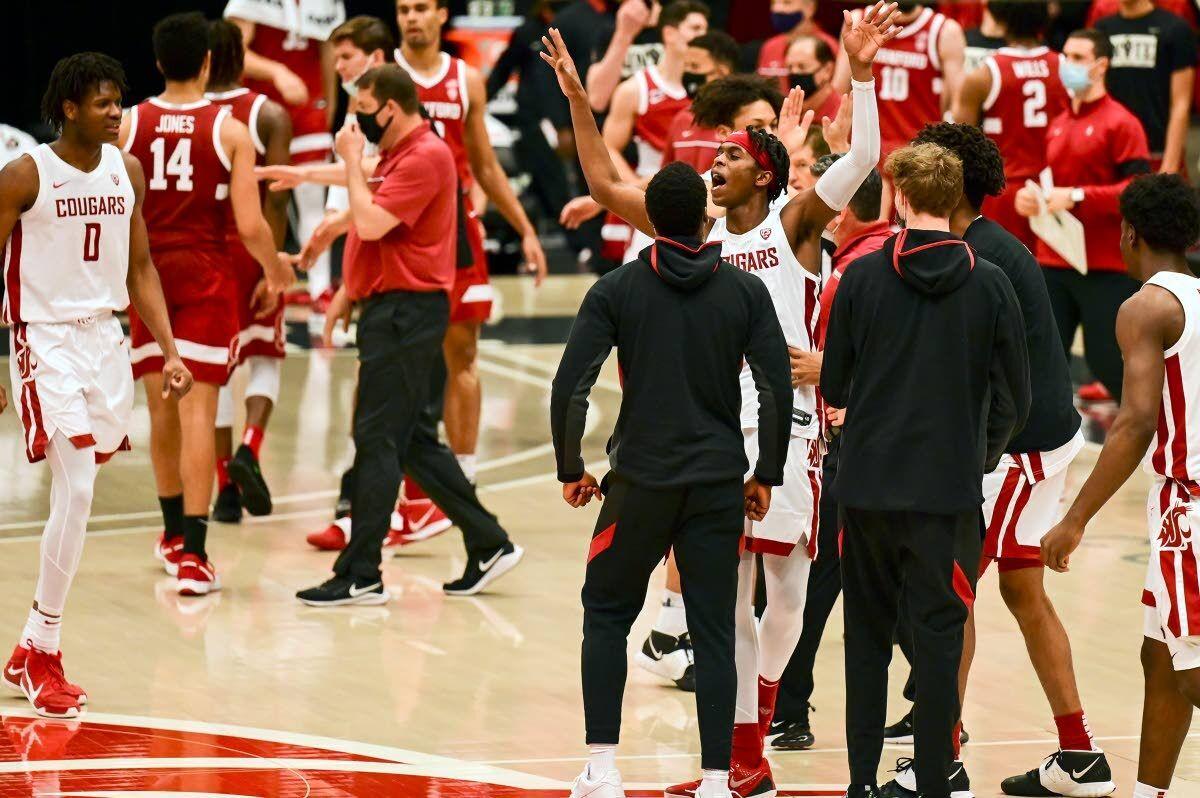 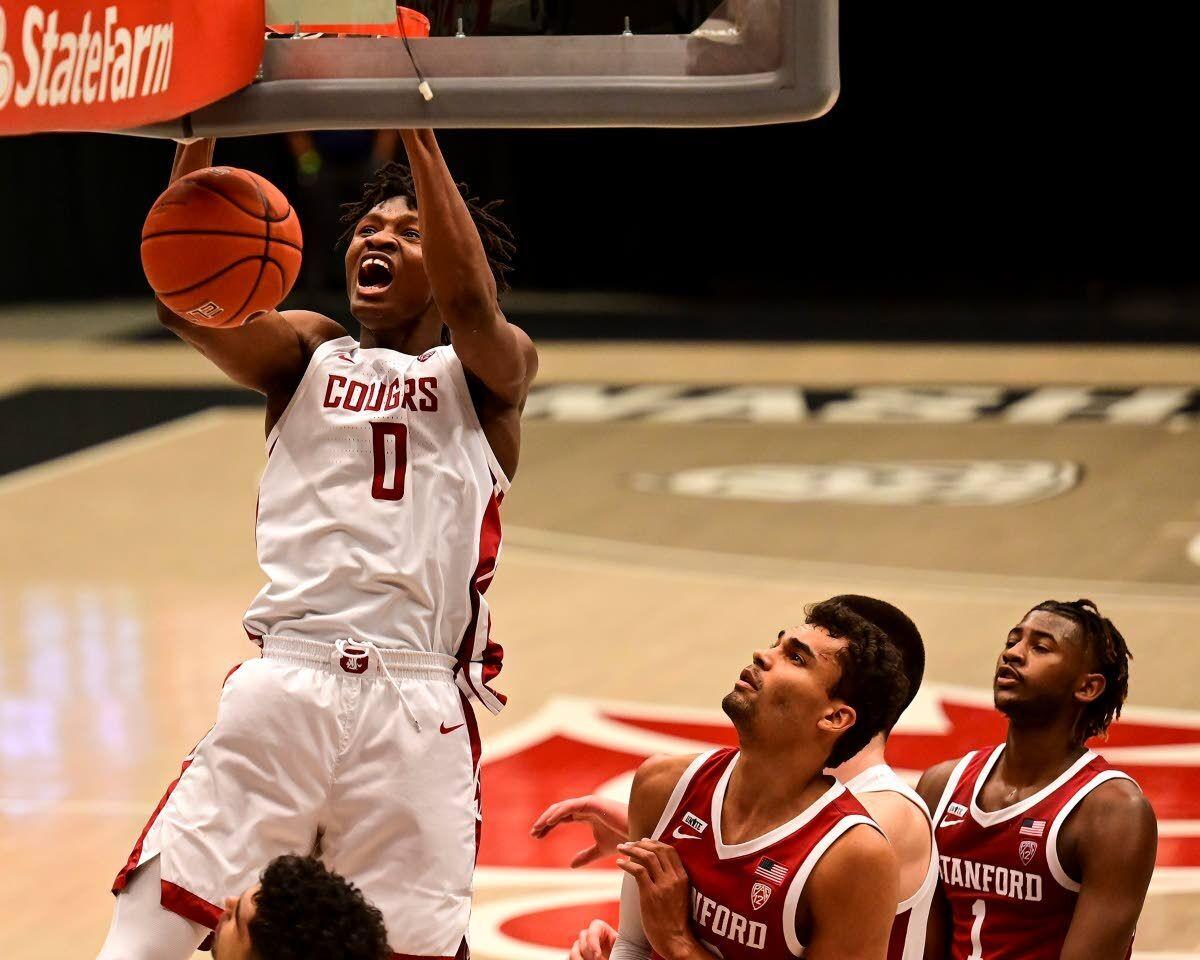 In the third overtime, they returned the favor.

Williams scored 40 points, including a 3-pointer that forced the first overtime, and Andrej Jakimovski doled out two stellar assists in the final four minutes Saturday as the short-handed Cougars rallied from an eight-point deficit in regulation to beat Stanford 85-76 in a Pac-12 game.

“I’ve been in a few overtime games in my day, and that was as good as it gets,” said Smith, the second-year WSU coach who clinched the school’s first winning season since 2010-11.

That the crowd at Beasley Coliseum was limited to 200 because of the coronavirus pandemic hardly dimmed the ­Cougars’ satisfaction.

They had battled long odds for much of the game, facing a team with superior depth, experience and inside firepower. They were missing two guards to injury, including their top scorer, senior Isaac Bonton, who watched from the bench in what would have been his final regular-season home game.

But Williams picked up the slack and then some.

With a self-assurance that belied his youthful appearance, he produced 72 points in two games as WSU (14-10, 7-10) swept the Bay Area teams in a three-day span, broke a nine-game losing streak in the series and dealt Stanford (13-9, 9-7) a big blow in its quest for an NCAA tournament berth.

“I just had a chip on my shoulder — I was tired of losing to Stanford,” Williams said.

The Cougars kept asking the world of him, and he kept delivering. He played 54 of the game’s 55 minutes and was 8-for-18 from 3-point range, including 5-for-8 in the second half.

With the Cougs trailing 63-60, he sidestepped Bryce Wills to drill a 22-footer with six seconds left and induce overtime. Smith later wondered aloud if Wills had fouled him on the play.

“He’s probably got the best belief of anyone I’ve ever coached,” the coach said of his slender 6-foot-5 guard from Seattle. “He’s got great self-esteem, great confidence.”

Probably exhausted, Williams allowed his teammates to win the game in the third extra session.

Jakimovski drove and dished to Efe Abogidi for a go-ahead layin, Aljaz Kunc hit a putback and, half a minute later, Jakimovski slyly found Abogidi with a behind-the-back bounce pass to the perimeter. The 6-10 freshman had missed 20 consecutive 3s, but this one was money.

The Cougars wound up dominating the third overtime 9-0, but they didn’t forget who’d taken them to this dance.

“They drenched me in Gatorade,” Williams said of his teammates. Smith also got doused.

For the record, Williams said the suspense of the game had chased away any thoughts of fatigue.

“The most minutes I’ve ever played,” he said. “I didn’t even think about it. I didn’t even know it was that many minutes. I was just out there playing My adrenaline’s rushing. I’ve got fans in the crowd, so they’re bringing me more energy.”

Said Kunc, “I feel like once the game gets going, it’s not even about who’s more conditioned. It’s about who wants it more and who plays with more heart. And I feel like we were that team today.”

The late dramatics stood in stark contrast to an awkward first half that saw WSU shoot 9-for-26 and the Cardinal commit 11 turnovers.

When Stanford post Lucas Kisunas began asserting himself, the Cougs fell behind 39-31 with 15 minutes left in regulation. But Williams popped five 3s thereafter, including one that cut the deficit to 62-60 with a minute left.

True, Williams finished with nine turnovers, a slew of failed driving jumpers and a floor ratio of 12-for-35. But those facts must be viewed in the context of what he was being asked to do. Finally, he did convert one of those floaters to create the final score with 1:45 left.

He misfired on a gratuitous 3 at the 26-second mark, later admitting he was trying to match the 43-point performance his father notched for the Cougars in 1983, then a school record.

Michael O’Connell led the Cardinal with 17 points and seven assists.

Stanford star Oscar da Silva, the second-leading scorer in the conference, got into early foul trouble and didn’t attempt a shot until a steal-and-dunk to push a Cardinal lead to 45-39 with 10:46 left in regulation. He fouled out during the second overtime, having logged just 11 points.