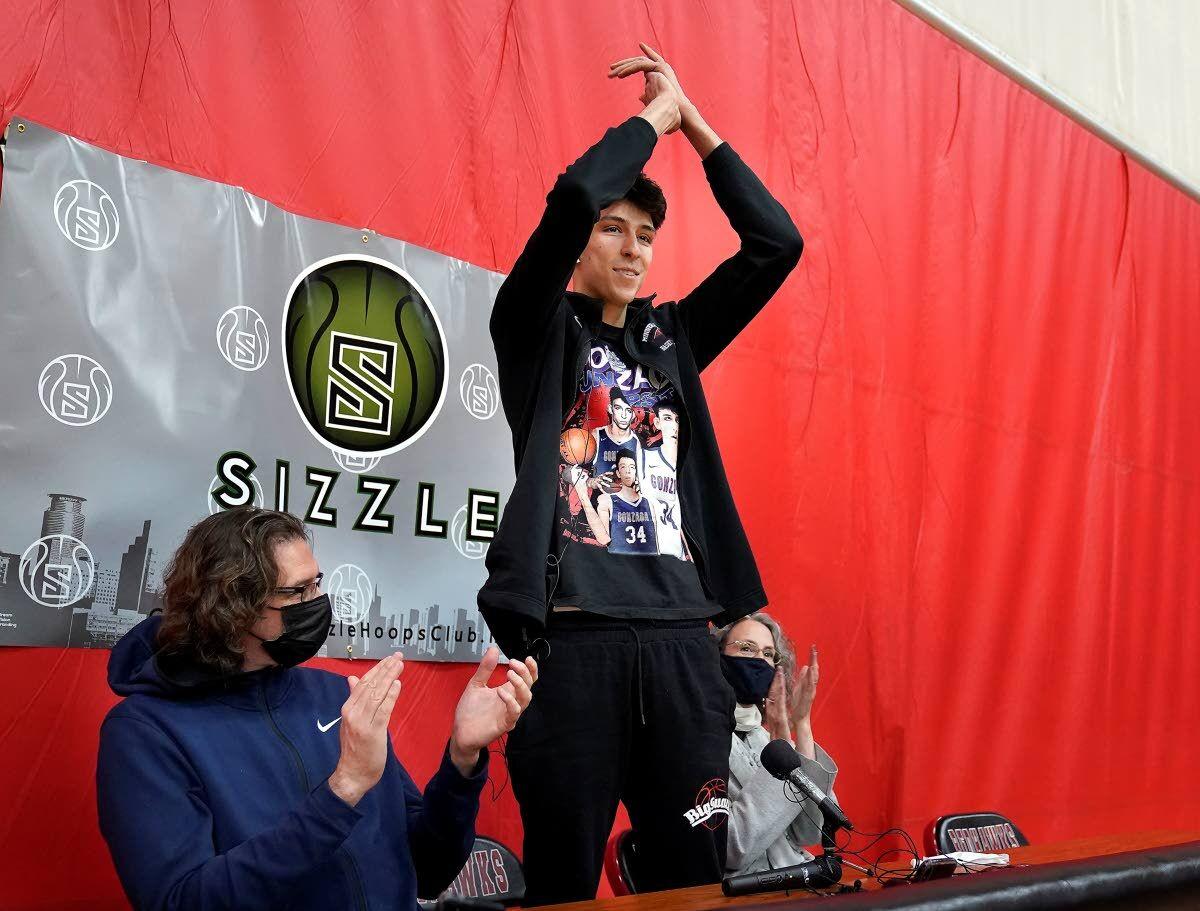 Minnehaha Academy’s Chet Holmgren, the No. 1 NCAA college basketball recruit in the country, claps during a news conference Monday in Minneapolis, during which he announced he will be attending Gonzaga University to play basketball. Chet is flanked by his father, David Holmgren, left, and mother, Sarah Harris, right. 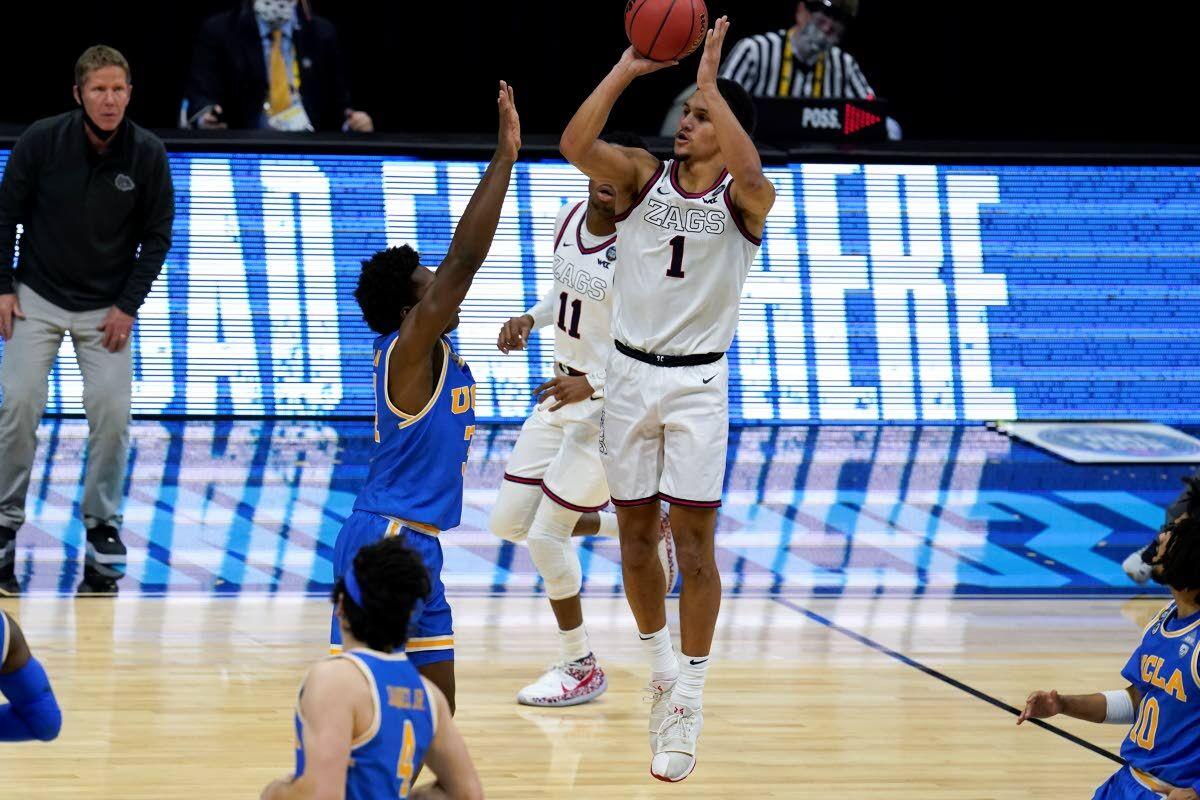 Minnehaha Academy’s Chet Holmgren, the No. 1 NCAA college basketball recruit in the country, claps during a news conference Monday in Minneapolis, during which he announced he will be attending Gonzaga University to play basketball. Chet is flanked by his father, David Holmgren, left, and mother, Sarah Harris, right.

MINNEAPOLIS — Sarah Holmgren remembers asking her then 8-year-old son Chet what he wanted to be when he grew up.

“He said ‘A pro basketball player,’ “ she recalled. “There were long odds against that, so my husband, David, and I asked him about a back-up plan.

That goal got a little closer to reality Monday when Chet Holmgren, now a 7-foot-1 senior forward from Minnehaha Academy and the nation’s most sought-after 2021 recruit, said he will play college basketball at Gonzaga University next season.

The news came on the same day Gonzaga star guard Jalen Suggs announced he is leaving the Bulldogs after one season to enter the NBA draft.

Holmgren announced his plans on ESPN’s midday SportsCenter show. As he did, he used his phone perched in front of him to share the news simultaneously with about 14,000 of his now 256,000 followers watching live on Instagram.

This season Holmgren averaged 20.8 points, shooting 80 percent from the field, and 4.5 assists, at times demonstrating ballhandling and outside shooting skills of a point guard. With a 7-foot-6 wingspan, he averaged 12.6 rebounds and 4.7 blocks in leading the Redhawks to the Class 3A basketball championship.

Holmgren amassed national honors throughout the last several weeks, winning the Naismith Award and the Wootten Award. He was named to the McDonald’s All-America team and was selected to the USA Nike Hoop Summit team. He also was the Sports Illustrated All-American Player of the Year.

Holmgren, sitting at a table set up at the north end of the Minnehaha Academy gymnasium, stood up and unzipped his black high school hoodie to reveal his choice on a T-shirt.

Among those gathered to see the announcement was former Redhawks teammate Suggs, who preceded him in going to Gonzaga, holding a Gonzaga Bulldogs T-shirt in his hand.

Holmgren’s announcement didn’t come as a surprise. Speculation about Holmgren going to Gonzaga started almost as soon as Suggs announced his plans in January 2020 to play for the Bulldogs. As a freshman, Suggs helped lead Gonzaga through an undefeated regular season to the national championship game earlier this month.

“I’m extremely excited for him,” said Suggs, who a few hours later announced his plans to turn pro. “Chet’s been like a little brother to me. I know he’s going to love Gonzaga. I know the campus is going to embrace him with open arms. I can’t wait to see him over there next year.”

Holmgren’s father, David, himself a 7-footer who played at the University of Minnesota, said his son only recently finalized his commitment to Gonzaga.

“Officially, about two weeks ago,” replied David Holmgren when asked when his son finalized his decision. “He was really struggling with the decision. It was not set in stone like everybody thought for months and months. It wasn’t like that.”

While Gonzaga hasn’t had a high profile in recruiting Minnesota players, Chet Holmgren said he was instantly willing to listen when the Bulldogs approached him.

“As soon as they came in the door and I knew they had interest in me, I had interest as well,” Holmgren said. “Especially with Jalen going there, there was plenty of opportunities to be able to see them and take up interest.”

Holmgren said Gonzaga’s style of play was a big factor in the decision and also fits his long-term goal of eventually playing in the NBA.

“It’s a perfect fit, the way they play in space and play with pace,” he said. “I don’t want to end up getting bogged down and stuck in the half-court stuff. I want to get out and run, get out and play fast. It’s more of an NBA-type style of play, which I want to learn and excel at.”

Holmgren’s profile as a recruit rose considerably in the summer of 2019 when a video went viral of him crossing over Golden State superstar guard Steph Curry for a slam dunk at Curry’s select camp.

While much of the talk surrounding her son’s announcement centered on basketball, Sarah Holmgren added there were other aspects that factored into the choice of Gonzaga.

“We’ve helped him to focus on the things that are important: Family, friends, community,” she said. “It was clear to us that is was very much of a family. It just felt right. We are sending our little boy off somewhere. And he is still my little boy, even at 7 feet.”

Suggs had a stellar freshman season, capped off by hitting one of the most memorable shots in Final Four history, a buzzer-beating 3-pointer against UCLA that sent Gonzaga into the national championship game. The Zags lost to Baylor in the title game.

Suggs announced in a Twitter post that he will enter the draft, which was anticipated since he’s considered a top pick.

“Super excited, can’t wait to take this next step in my journey,” Suggs said during an interview on ESPN. “It’s something I’ve dreamed about since I was a little kid. I’m ready to get going.”

Suggs was previously the highest-rated recruit in Gonzaga history. He was 11th in 247sports’ composite rankings when he committed to the Zags and 10th in the final rankings for the 2020 class.