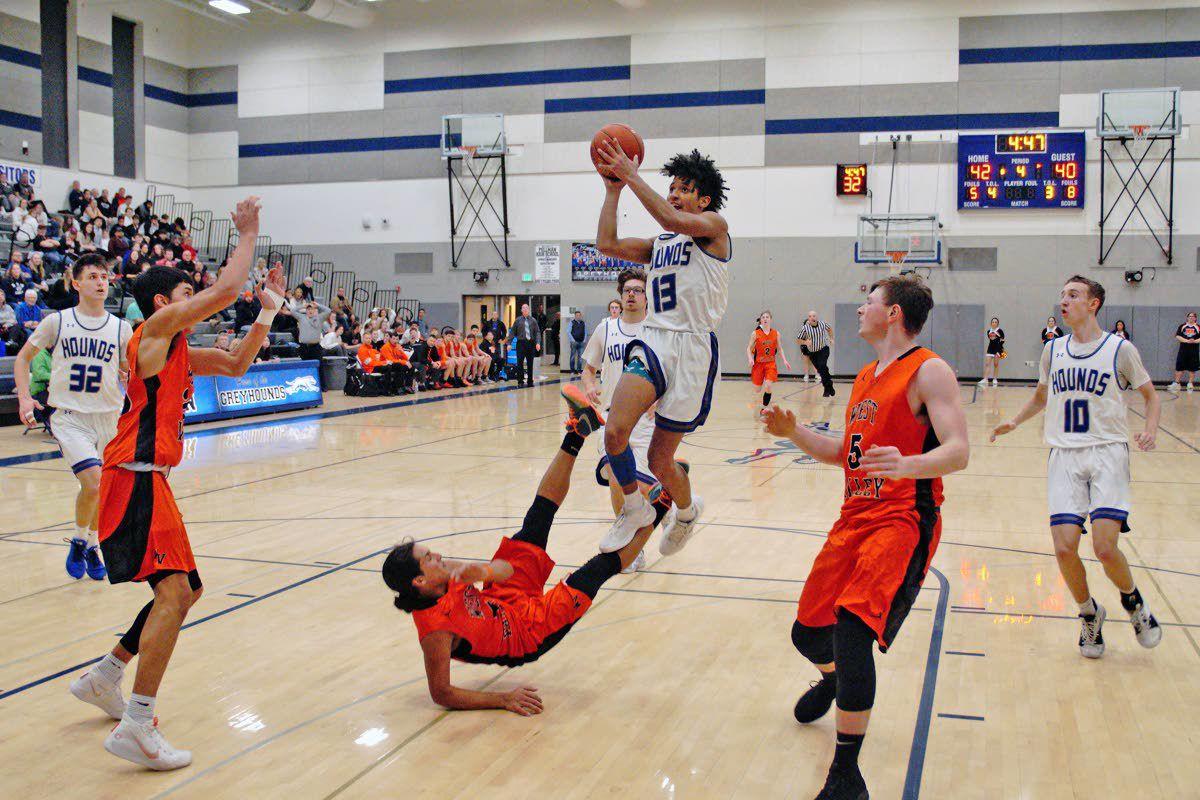 West Valley's Dakari Pakootas (4) falls to the floor after colliding with Pullman's Evan Strong (13) while Strong was driving to the hoop for a shot Friday night. Pakootas was tagged for the foul and Strong went to the charity stripe to shoot twice. 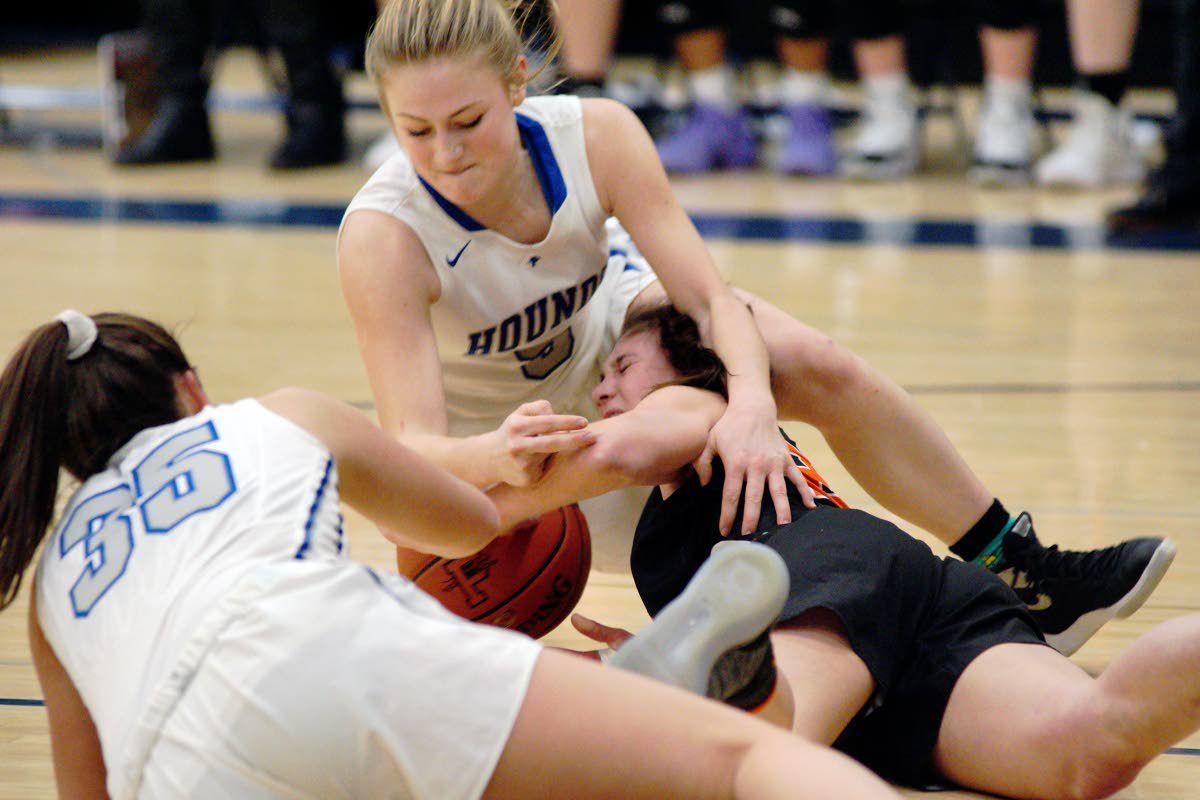 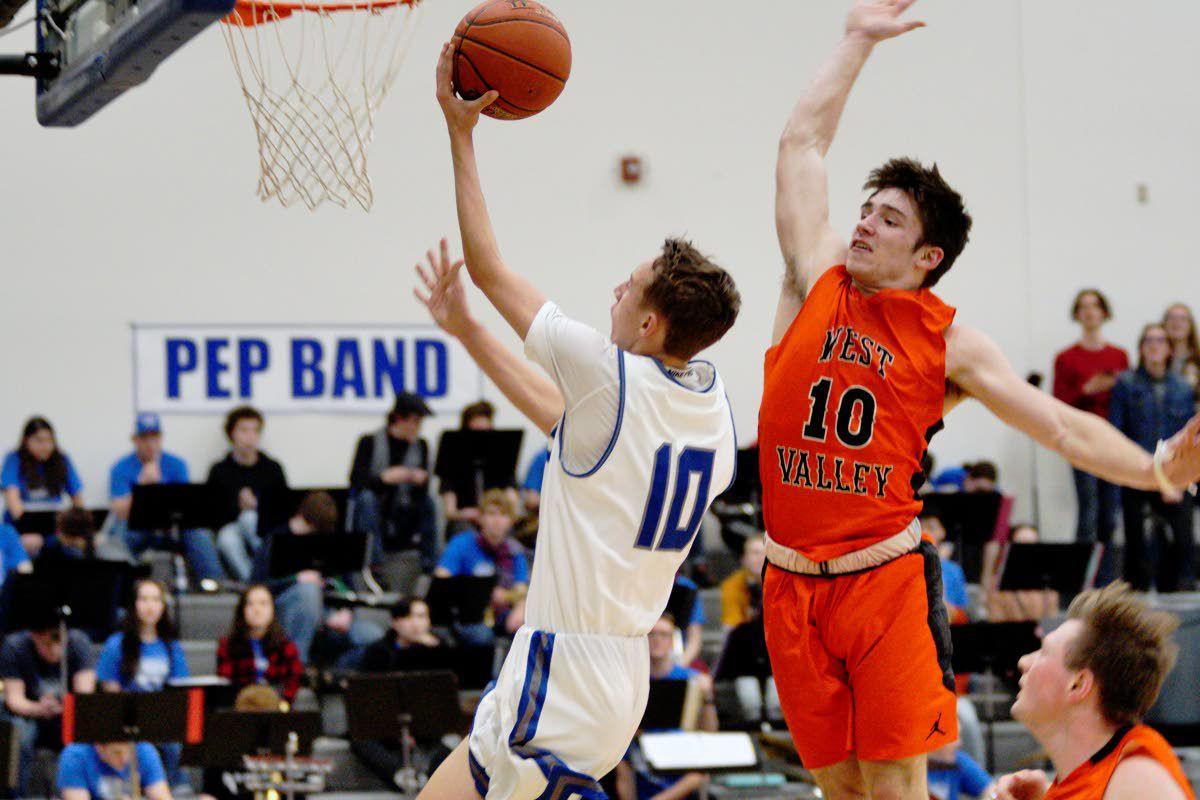 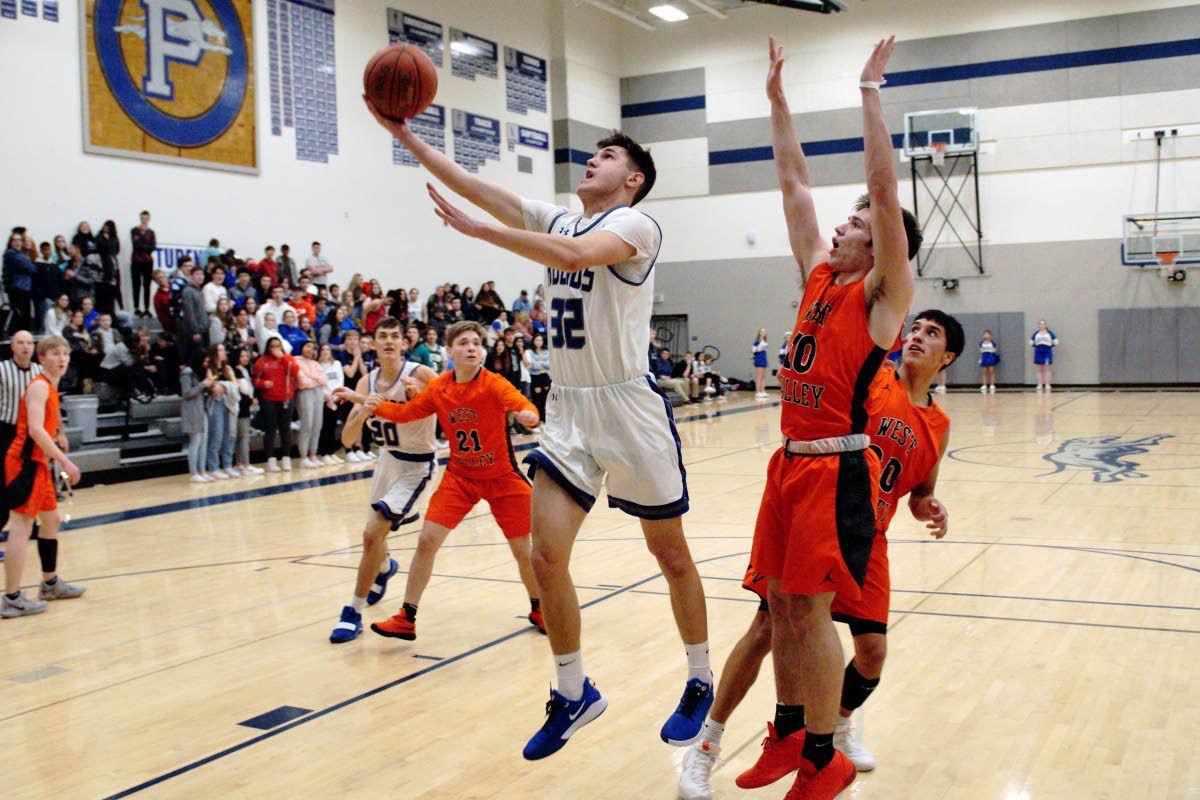 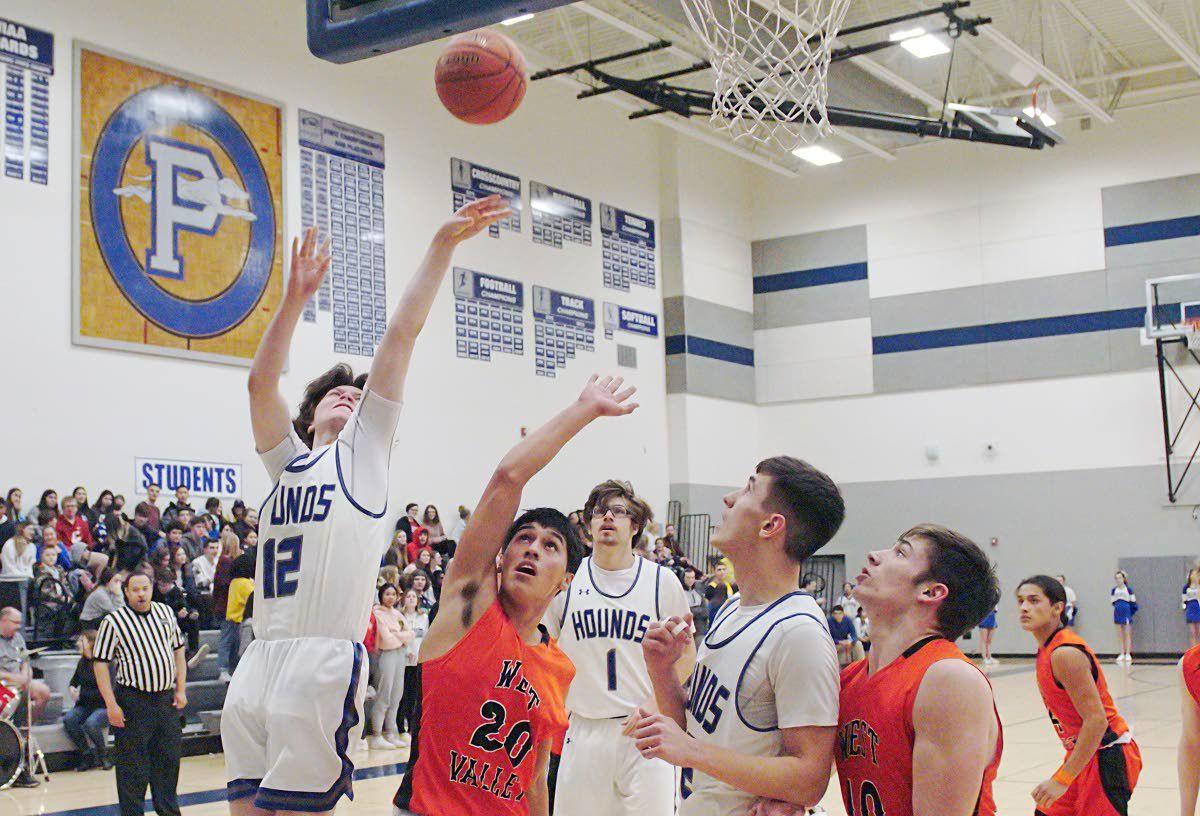 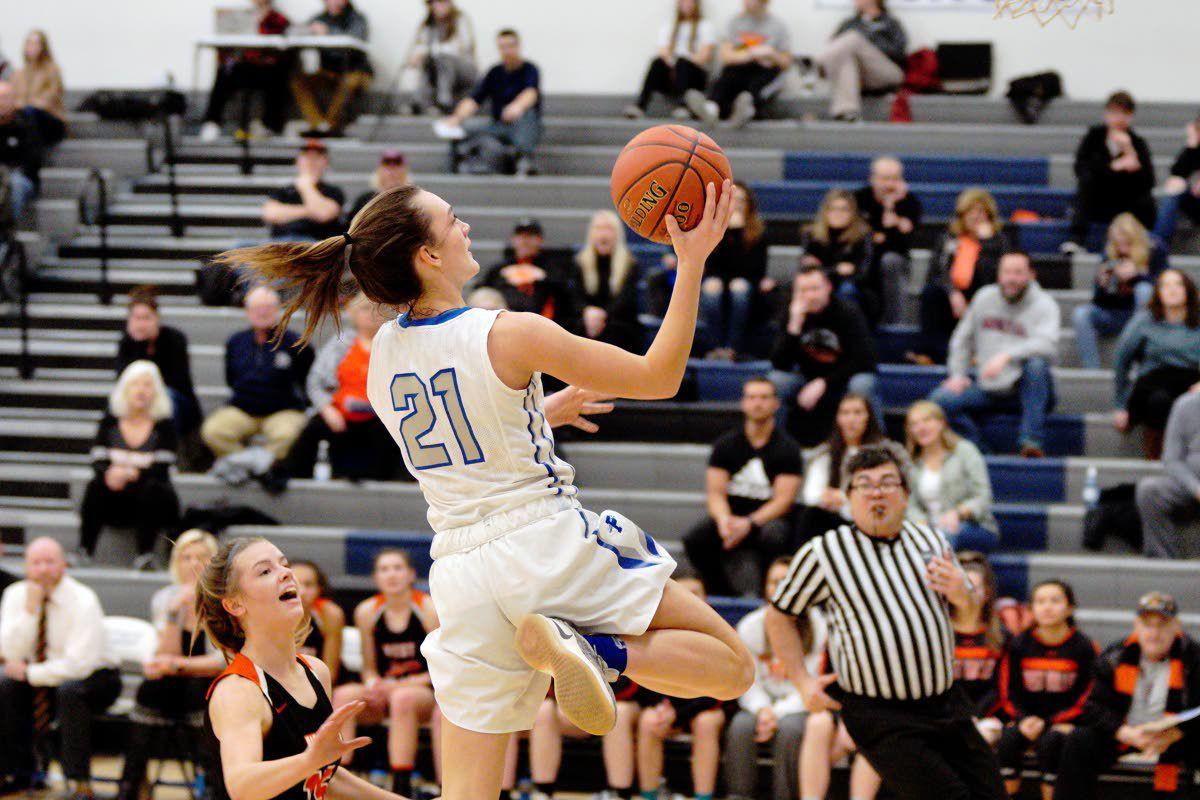 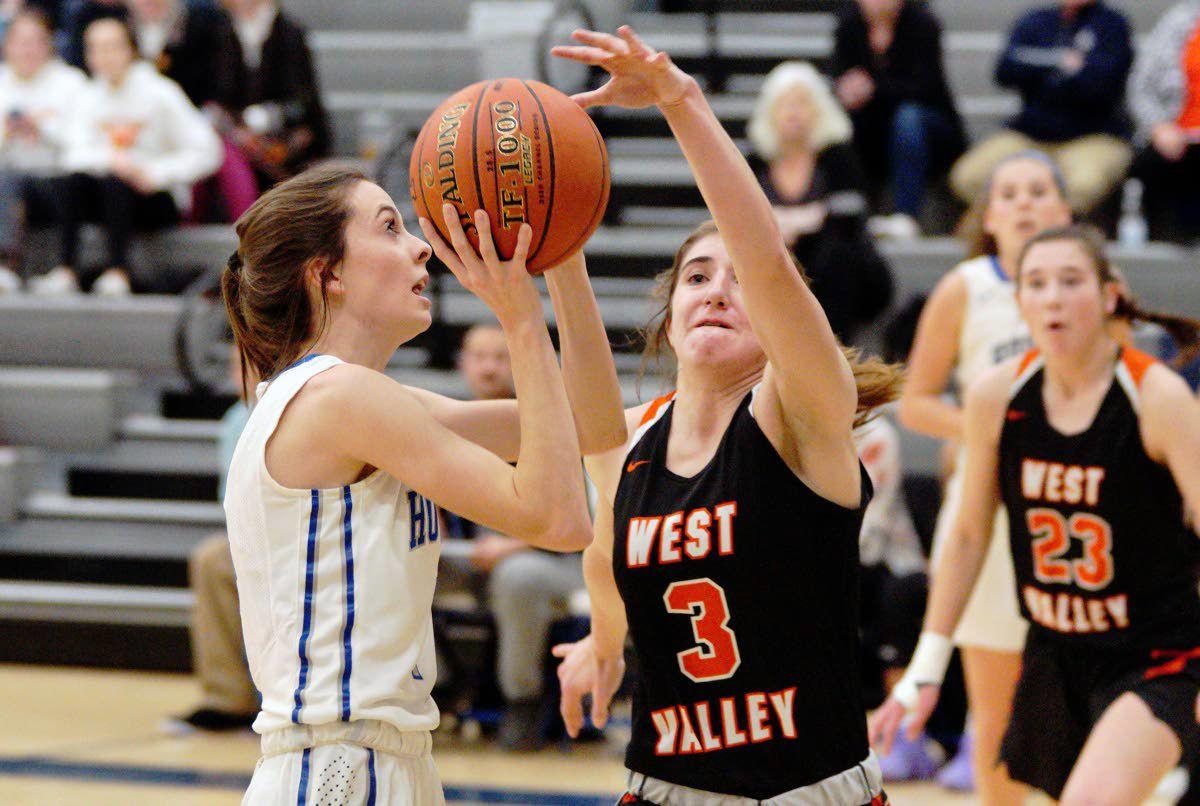 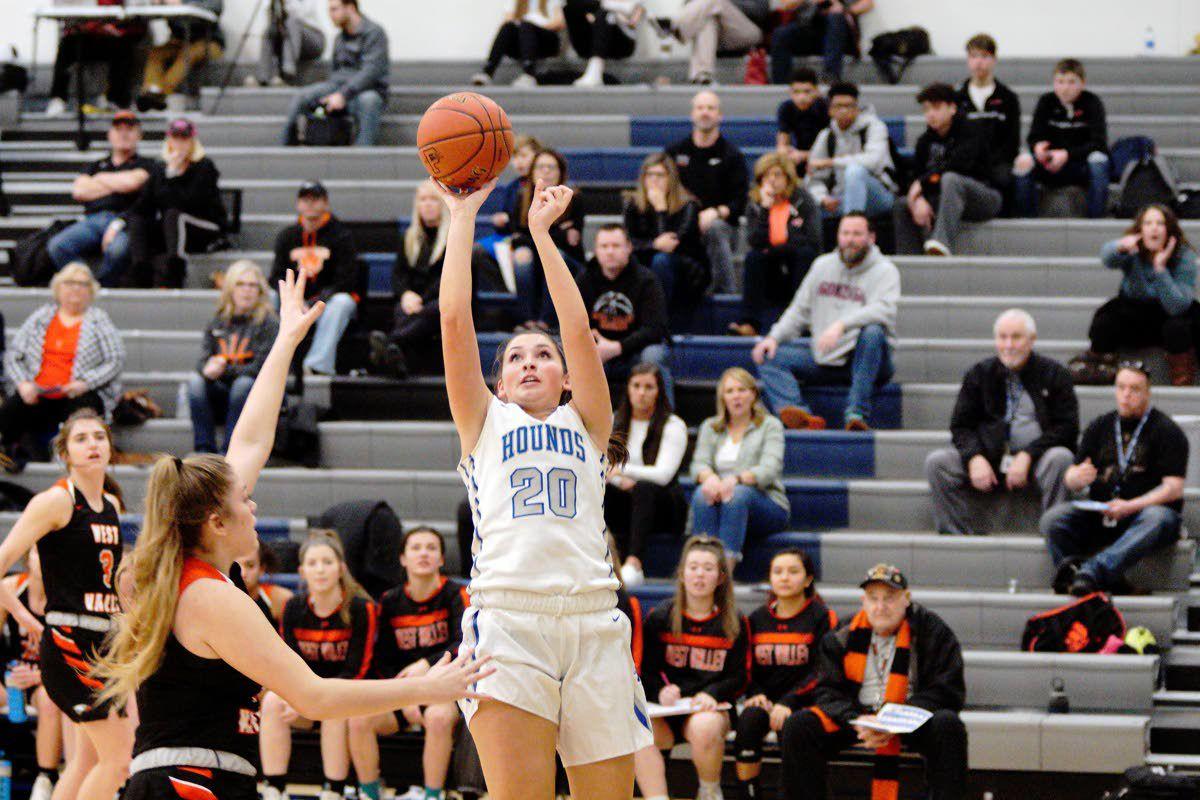 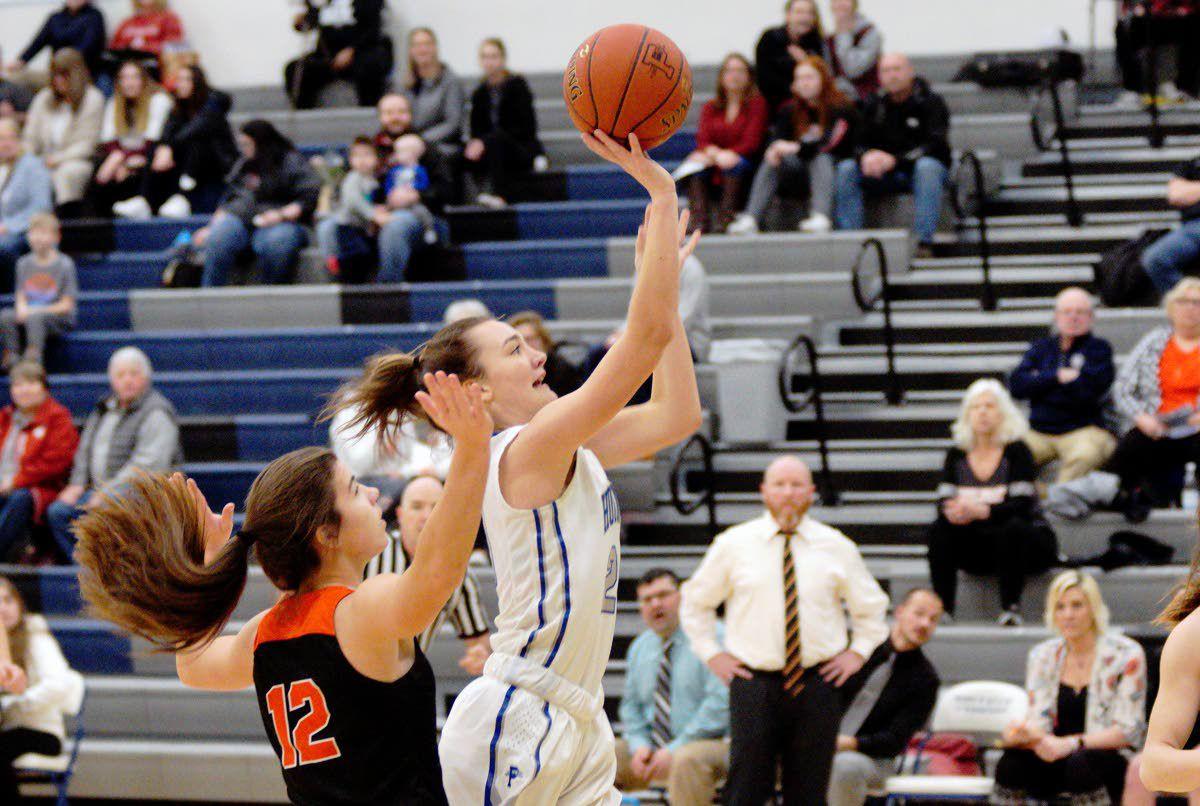 West Valley's Dakari Pakootas (4) falls to the floor after colliding with Pullman's Evan Strong (13) while Strong was driving to the hoop for a shot Friday night. Pakootas was tagged for the foul and Strong went to the charity stripe to shoot twice.

A packed, raucous crowd at Pullman High School and a pair of gritty teams with identical records provided the atmosphere for a Greyhounds’ senior night that was tight from opening tip to the final buzzer.

It was fitting the Pullman boys won Friday’s Great Northern League game on defense, forcing a contested West Valley 3-pointer that was off the mark and into the waiting hands of the ’Hounds, who held onto the ball to win 50-47.

Senior Ethan Kramer, one of six seniors honored, spearheaded the Greyhounds with 15 points, including two clutch free throws that pushed the Pullman lead to five with 21 seconds left.

“No better way to go out (than) a close victory,” Kramer said. “And I think we needed a win like that.”

In this one, the Greyhounds maneuvered around the West Valley screens with ease and forced the Eagles to drive to the hoop for most of their baskets. Junior Blaine Vasicek — responsible for eight 3s and 34 points in the previous meeting here — was held to two 3s and 10 points.

“We purposely tried to play more people and kind of keep them pressured and hopefully wear them down,” Pullman coach Craig Brantner said. “To hold them in the 40s with as good of a 3-point shooting team as they are, I thought we achieved what we wanted to.”

On a night where Pullman went 0-of-8 from outside itself, the Greyhounds had to find points in other ways.

But despite their lackluster shooting, the Greyhounds kept a close lead for most of the game.

The first half featured five ties, but Pullman only trailed once and led 25-23 at the break.

West Valley stuck around to take the lead at 27-26 on a Mason Dobney layup in the third quarter.

After the teams traded buckets, Pullman struck with back-to-back traditional three-point plays by Evan Strong and Kramer. The guards each were fouled on driving layups and proceeded to make their free throws.

The old-fashioned threes put Pullman up 34-29. The five-point lead was the largest of the game to that point.

The Greyhounds led by one going into the fourth, but stretched it to six on another Kramer layup with 4:24 to go.

Two minutes later, West Valley’s Jayce Pakootas drilled a 3 to cut the lead back to one. And again Kramer answered with a layup for a 48-45 lead. The senior guard’s free throws with 21 seconds left were the final points for Pullman.

West Valley had a chance to tie it after Vasicek hit two free throws and the Eagles stole the Pullman inbounds pass on the other end.

But the Eagles almost lost the ball on their final possession and Pakootas was forced to put up a contested 3 that was off the mark.

“Honestly it just comes down to leadership, and we just have to grind through and get some stops,” Kramer said. “I take that leadership role being a captain, and just talk to our guys saying: ‘We need to get one stop at a time and go down and score.’

Strong tallied 10 points, with seven coming at the free-throw line, to join Kramer in double figures.

Jace Peterson finished with 16 points to lead the Eagles.

The banged up Greyhounds played 10 players, including two that started the season on JV.

Brantner said he didn’t want to talk about specific injuries after the game, but said he was happy with how his team has played through adversity.

Pullman wraps up the regular season at 7 p.m. Tuesday at Cheney.

With 2:39 left on the clock, Pullman girls’ coach Chris Weeks subbed out his three seniors — Peyton Teevens, Hailey Chittenden and Hallie McDougle — for the last time.

The trio received a standing ovation from the packed crowd.

“We really wanted to send them off the right way and kind of give them that moment,” Weeks said. “... The wins haven’t really come, but I think we’ve gotten so much better from Day 1 and we’re competing in every basketball game.

“Those seniors deserved that moment and that time to step off the basketball court one last time.”

The gesture for the seniors provided a bright spot in a game against a league-leading West Valley team that proved too much to handle for the young Greyhounds.

After Pullman burst out to a 10-7 lead early on a bucket by Chittenden, West Valley used some crisp 3-point shooting to garner a 19-13 advantage by the end of the first.

In total, the Eagles hit 11 3s, including four by Hailey Marlow and three by Jillian Taylor. Marlow (18 points) knocked down all of her 3s in the first quarter.

The second was a defensive slugfest with West Valley leading 31-20 at halftime. But in the second half, the Eagles continued to pull away.

Pullman was led by junior Meghan McSweeney with 15 points.

Teevens scored only one point, but racked up a couple tough blocks in the second half, as well as a steal.

“Those girls play hard buzzer-to-buzzer, and that’s what we preach is go out regardless of score and outcome,” Weeks said. “We talk about NATO — ‘not attached to outcome’ — and playing hard regardless of what is going on, and she’s really a catalyst for that.

“We’re down 20 and she’s still going out for blocks and diving on the ball, and that’s (being) a great role model for those other girls.”

Stephan Wiebe can be reached at swiebe@dnews.com, by phone at 208-883-4624 and on Twitter at @StephanSports.