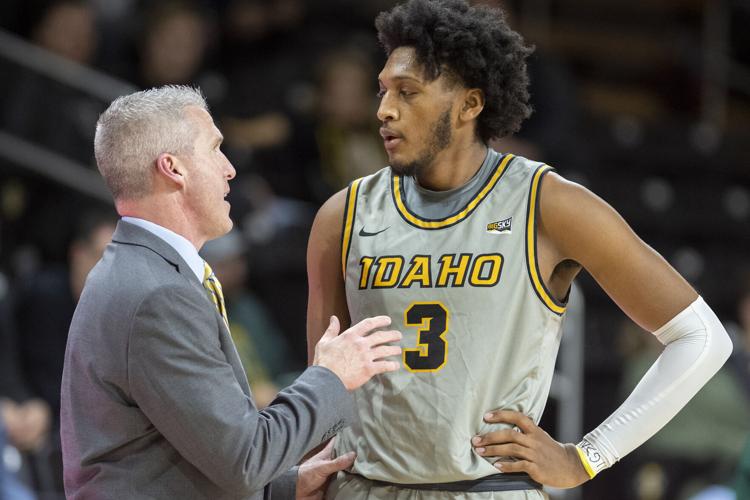 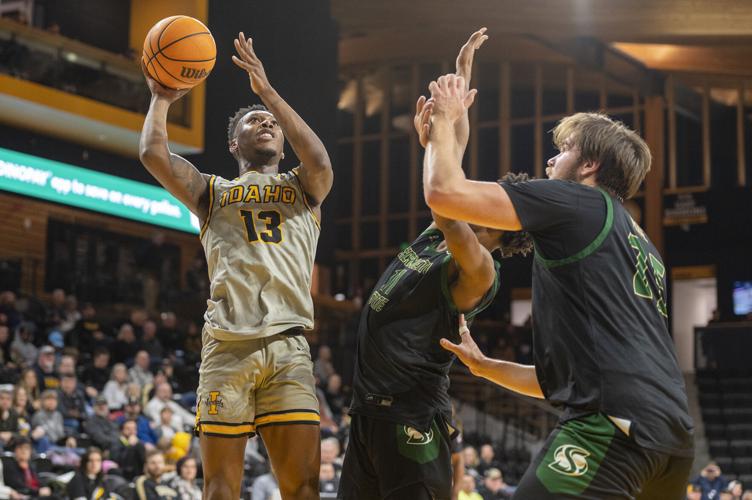 Idaho guard Divant'e Moffitt (13) takes a shot over two Sacramento State defenders during the first half of a Big Sky Conference game at Idaho Central Credit Union Arena in Moscow.

Idaho guard Divant'e Moffitt (13) takes a shot over two Sacramento State defenders during the first half of a Big Sky Conference game at Idaho Central Credit Union Arena in Moscow.

When looking at its 8-13 record, it’s easy to dismiss Idaho’s men’s basketball team.

However, the Vandals are one win away from their best season under fourth-year coach Zac Claus. With 10 games remaining, Idaho should be able to better the 9-22 mark last season’s team had, the best under Claus. That could be a big deal for Claus, who is in the final year of his contract.

Idaho is coming off a three-game run where it notched significant victories against Montana State, the No. 2 team in the Big Sky Conference, and Northern Arizona on the road. The Vandals’ 88-83 win against the Lumberjacks was their first win in Flagstaff, Ariz., since 2018.

“I’m very proud of these guys,” Claus said. “They’ve shown a lot of toughness and resilience. They battled hard to get a great win at home and come back with a solid win on the road against Northern Arizona.”

Idaho’s hopes of winning three in a row were not to be after Saturday’s 73-67 loss at Northern Colorado.

If the Vandals won that one, it would have been the second time in Claus’ tenure they registered three consecutive victories. Idaho won three in a row last year against Weber State, Montana, and Eastern Washington in mid-February before falling 85-51 to Sacramento State on Feb. 24.

All three of those games were at the friendly confines of the Idaho Central Credit Union Arena, where the Vandals finished 8-7 overall. Idaho is 5-5 at home this season.

Where the Vandals have struggled under Claus has been on the road. Under his leadership, Idaho is 6-41 in true away games.

The good news? Half of those wins have come this year. The Vandals are 3-8 this season away from home, the most wins in the Claus era.

“Going through a four-game stretch while traveling for two of them against some of the best teams in the league is tough,” Claus said. “All this does is fuel my confidence that we’re getting better as a group.”

An obvious spark has been provided by the Spanaway, Wash., connection of junior forward Isaac Jones and senior guard Divant’e Moffitt. In the wins against Montana State and Northern Arizona, Moffitt had 57 total points, including a career-high 32 against the Bobcats.

His performance against Montana State, as well as a 25-point effort against Eastern Washington on Jan. 14, earned him Big Sky player of the week honors.

Moffitt is third in the Big Sky in scoring, averaging 18 points per game, also averaging 5.1 assists an outing, second-most in the conference.

Jones paced the Vandals in their win against the Lumberjacks with 30 points. A lot of the success Idaho had early in the season was based on what He was able to do. Jones averages 19 points per game, hitting shots at a 68-percent clip, sixth-best nationally.

As the season has progressed, Idaho’s players have started to build chemistry, taking some of the load off of Jones.

Players like Moffitt and sophomore Yusef Salih are starting to understand their roles and step up in big moments.

Salih hit what would be the game-winner with 22 seconds left against Northern Arizona. He finished with 13 points, the third time in five games that he reached double figures. Before that, he’d only had 10 or more points twice in the previous 10 games.

Slowly but surely, Claus is ending curses. The players he has brought in are starting to gel.