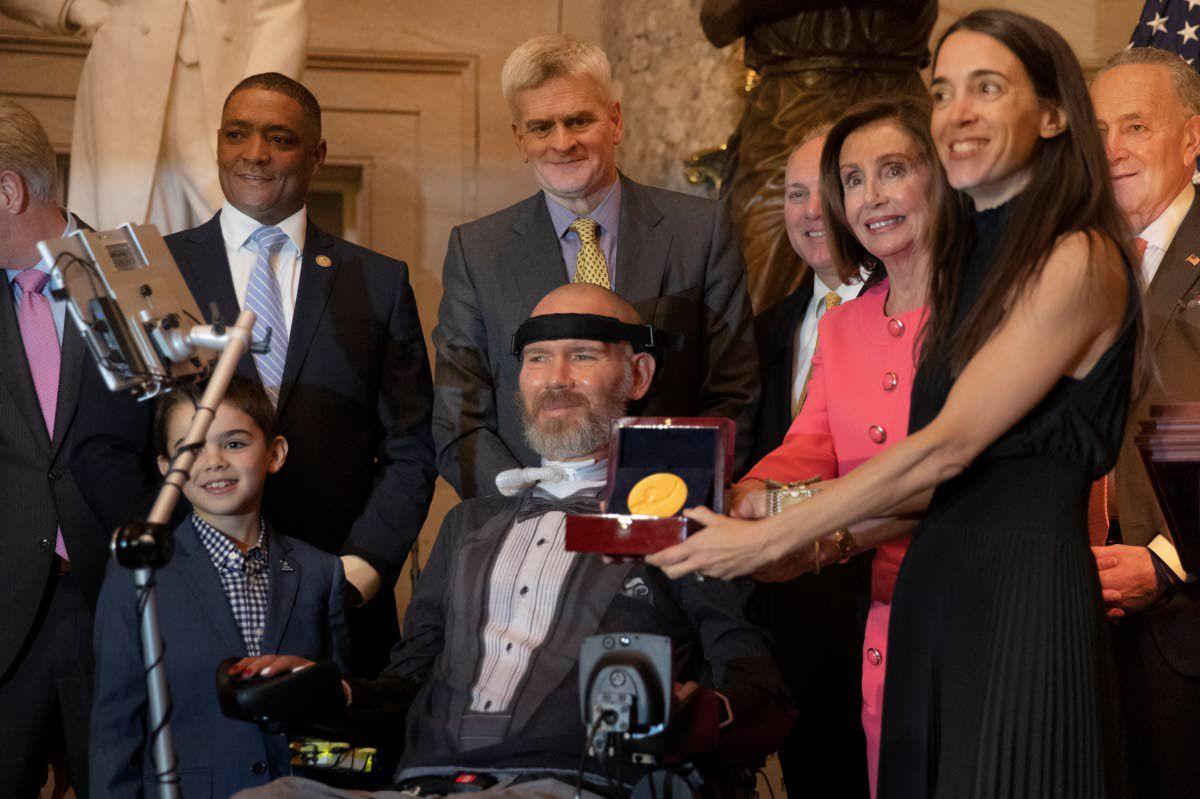 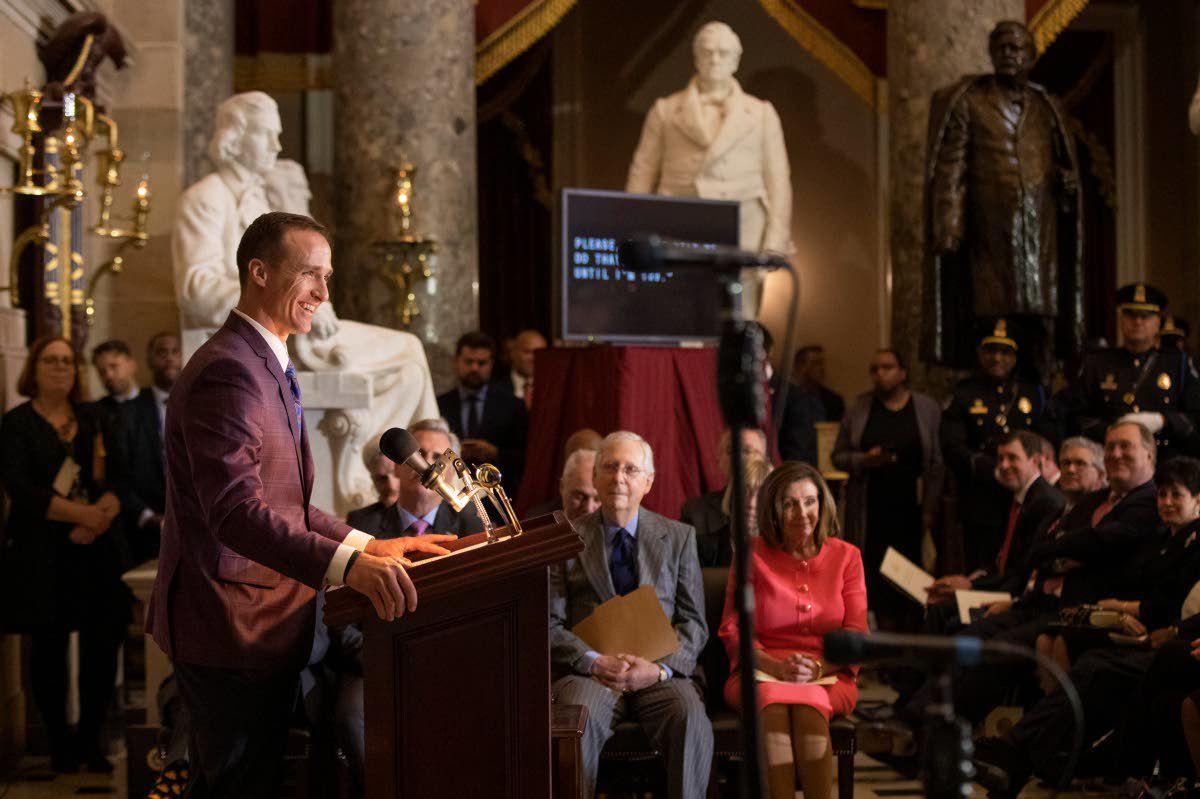 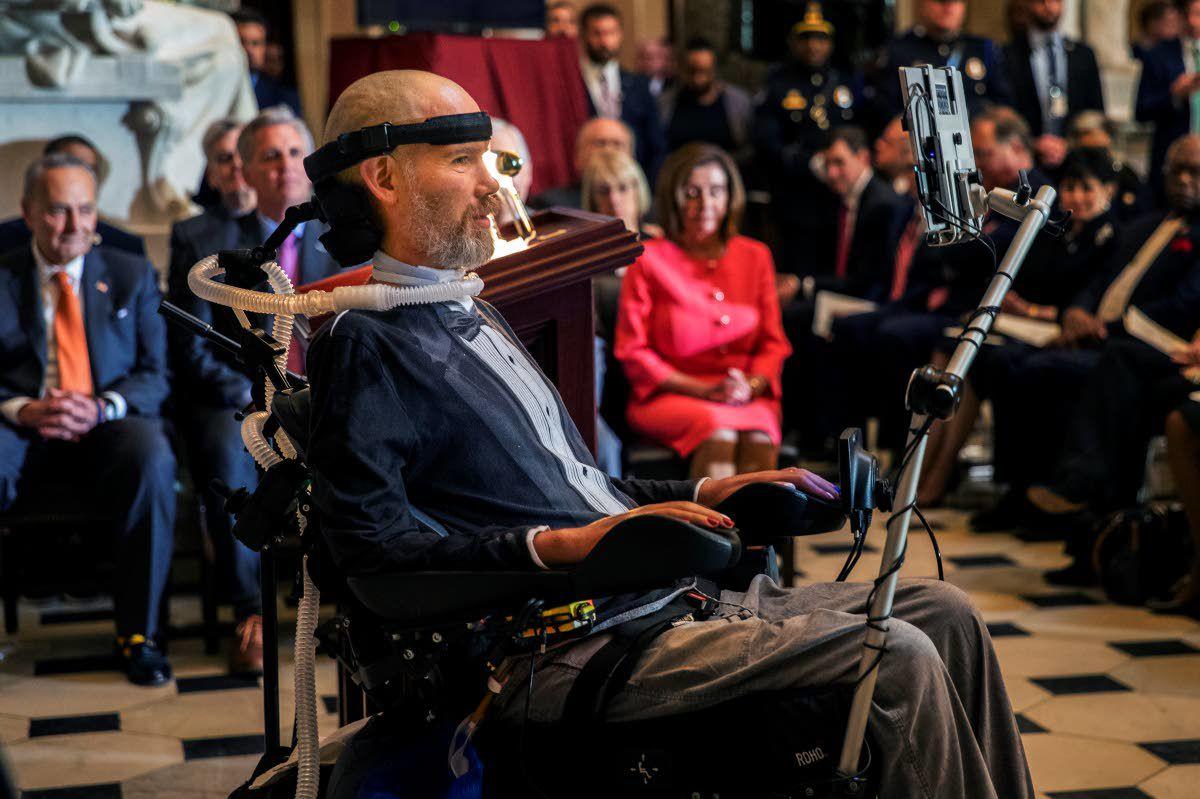 “This award represents the people of the United States of America and is a sublime honor for me,” Gleason, who no longer can speak on his own, said through a computer-generated voice. “It represents some joy, some encouragement and some triumphs for the tens of thousands of families living with ALS and others living with disabilities or experiencing anguish, tragedy or adversity.”

Gleason thanked his family for their support since his diagnosis, noting to his wife, Michel, “This is not the life we imagined and it hasn’t been easy.”

Gleason also said it’s his children — son Rivers and daughter Gray — who “give me purpose.”

“We have come to honor a true American hero ... who has transformed the lives of so many people living with ALS,” Pelosi said. “You bring pride to our nation.”

The 42-year-old Gleason was diagnosed with ALS in 2011. He has since spearheaded efforts through the Team Gleason foundation to develop and provide technology to help ALS patients live longer, more fulfilling lives. Those include devices that track eye movements to help people who are paralyzed type words that can be transformed into speech. Gleason has used the technology to communicate, post messages on social media, address lawmakers from around the world and give motivational speeches to athletes.

Congress in 2018 approved the Gleason Act, which provided funding to help ALS patients get those devices.

“In the ALS community, he is a rock star, he gives hope,” said U.S. Senator Bill Cassidy, a Republican from Louisiana and a doctor who helped sponsor the legislation to honor Gleason. “Through his example of how he lives, he has changed life for us all. Thank you for inspiring hope even in the face of extreme adversity. Thank you for being a hero.”

Gleason played in 83 games for New Orleans between 2000-06 seasons, emerging as a special teams leader and blocking four punts. His final block occurred against Atlanta on Sept. 26, 2006, the night the Superdome reopened for the first time since it was heavily damaged serving as a shelter of last resort for thousands who’d remained in New Orleans when Hurricane Katrina struck almost 13 months earlier.

The play has been memorialized by a bronze statue entitled “Rebirth,” on a public plaza surrounding the Superdome.

Gleason played football and baseball with the Cougars from 1995-99 and was a four-year letterwinner in both sports. He was a two-time team captain in football, garnered All-Pac 10 Conference honors three times and finished his career with 282 tackles, ninth-most in school history. He also was a key figure on defense for the 1997 team that made WSU’s first Rose Bowl appearance since 1931. As a member of the baseball team, he served as team captain his senior year and his 12 career triples were tied for third when he left.

In 2016, WSU’s athletic department announced the naming of the Steve Gleason Recruit Suite inside the Cougar Football Complex.