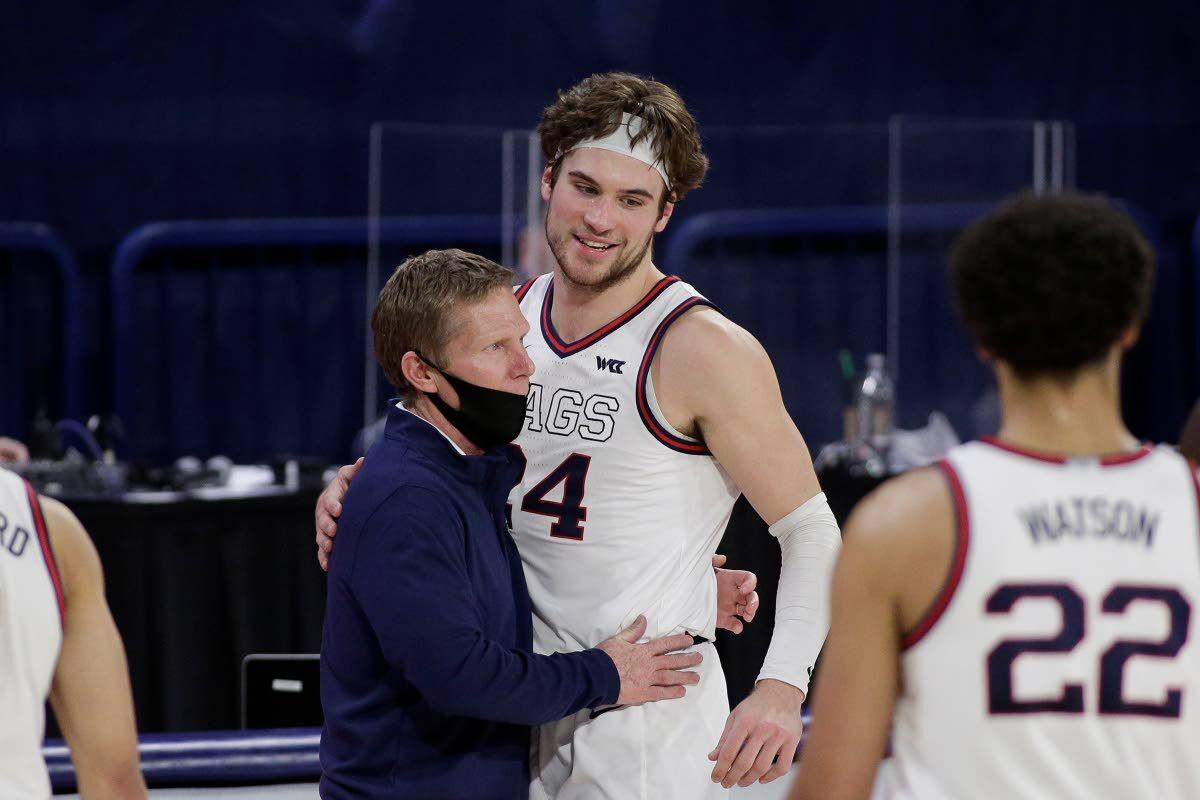 Associated PressGonzaga coach Mark Few hugs forward Corey Kispert after Kispert, a senior playing his last home game, left the court near the end of the second half of the team’s NCAA game against Loyola Marymount in Spokane on Feb. 27. 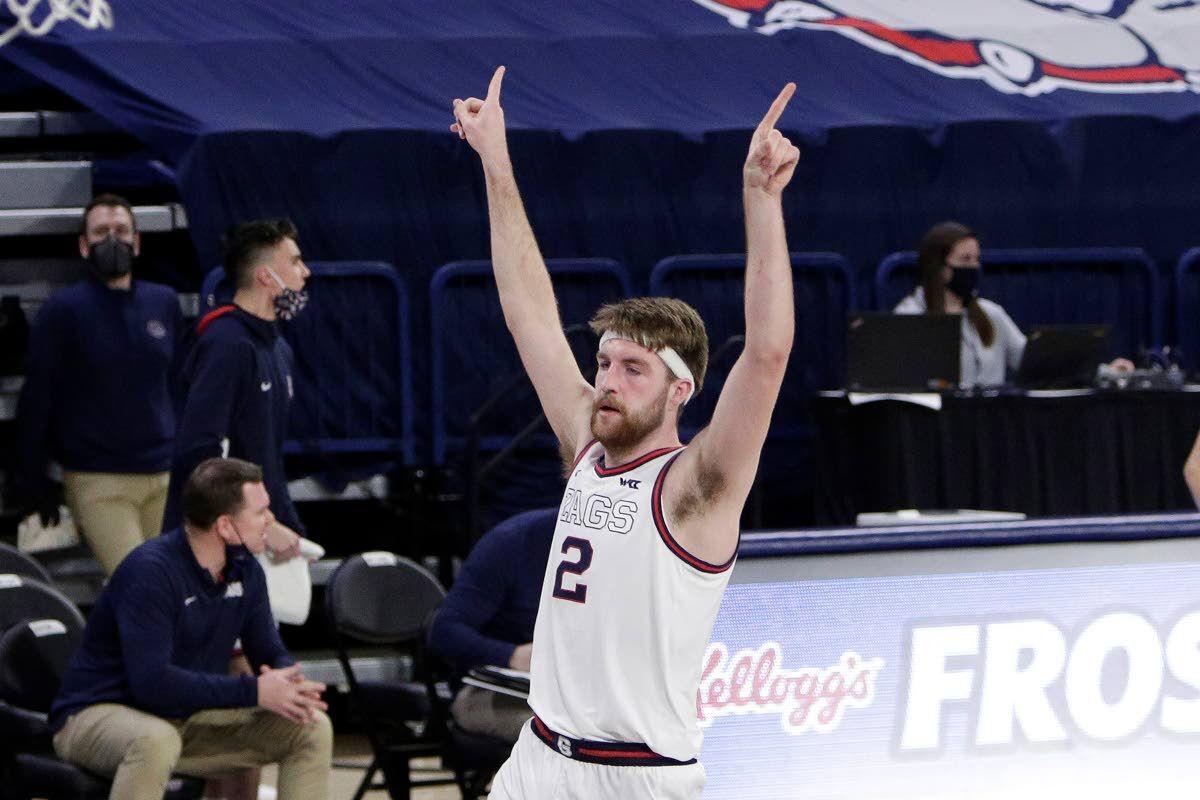 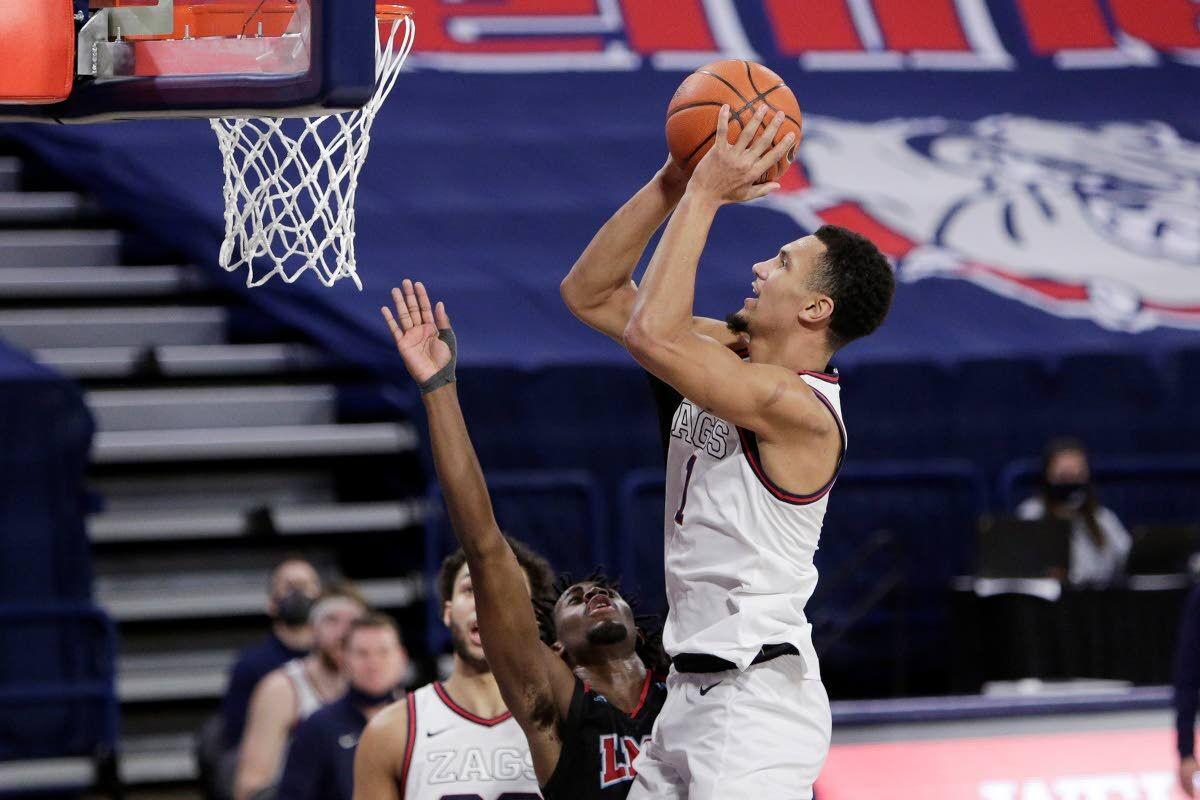 Associated PressGonzaga coach Mark Few hugs forward Corey Kispert after Kispert, a senior playing his last home game, left the court near the end of the second half of the team’s NCAA game against Loyola Marymount in Spokane on Feb. 27.

In the aftermath of completing the first unbeaten regular season in school history last week, Mark Few likened what top-ranked Gonzaga has accomplished so far to running a long-distance race.

The Bulldogs were ranked No. 1 in the AP Top 25 when the season began. They were unflappable during a 24-0 regular season that earned the Bulldogs their ninth straight West Coast Conference regular-season title.

Two more wins next week at the WCC tournament in Las Vegas and the Bulldogs will join even more select company with the NCAA Tournament on the horizon.

But going wire-to-wire at No. 1 and being perfect in the regular season doesn’t matter for a program whose aspirations are based on trying to finally claim it first national championship. It’s still an accomplishment worth recognizing should Gonzaga pull it off.

“I don’t know about how important it is and all that. I mean it would be a heck of an accomplishment, quite frankly,” Few said. “It’s hard to be the front runner and lead the mile all four laps. Everybody’s gunning for you.”

If the Bulldogs can finish their run through the WCC and win the conference tournament next week, they will become just the fifth team in the past 45 years to enter the NCAA Tournament unbeaten.

The Zags are already headed to Indianapolis as a No. 1 seed. The question is whether they’ll be going to the Hoosier State attempting to match Indiana’s perfect championship season of 1975-76.

Whether Gonzaga can win twice more to reach 26-0 will settle the question about the scope of the attention on the Zags when they arrive in Indiana. So far, they’re not feeling any pressure.

“All that pressure comes from the outside, not from anything inside the program with the players,” WCC freshman of the year Jalen Suggs said. “We’re just looking to go out every night and get a win on that night, not looking too far ahead.”

Since Indiana completed the last perfect season, only four teams have entered the NCAA Tournament unbeaten. None went on to win the title.

Indiana State was 29-0 in the regular season with Larry Bird but finished 33-1 after losing to Magic Johnson and Michigan State in the 1979 title game. UNLV was a perfect 34-0 in its quest for consecutive titles before being upset by Duke in the national semifinals in 1991.

Wichita State was 34-0 entering the tournament in 2014, but a tough draw led to the Shockers being bounced in the second round by Kentucky.

A year later, it was the Wildcats whose bid for perfection was ended in the Final Four by Wisconsin. Kentucky was a wire-to-wire No. 1 in the AP Top 25.

“It would be great to join the esteemed company ... I remember that Kentucky team. That was a phenomenal team,” Few said. “But it’s not going to be easy. The conference tournament just amps up several notches here as teams are playing for their lives now to survive and play in the greatest sporting event in the world.”

Corey Kispert knows the ultimate goal for a team that has won 28 straight games dating to last season is winning the NCAA Tournament not having success in Las Vegas. Still, he acknowledges it would be “cool” to be unbeaten going to Indianapolis.

“It’s cool to look back and kind of had those little things fed into your ear,” Kispert said. “Really proud of the team that we’ve put on the floor this year and proud of how we’ve performed. It’s just a small piece of the product that we’ve managed to put out there this year.”