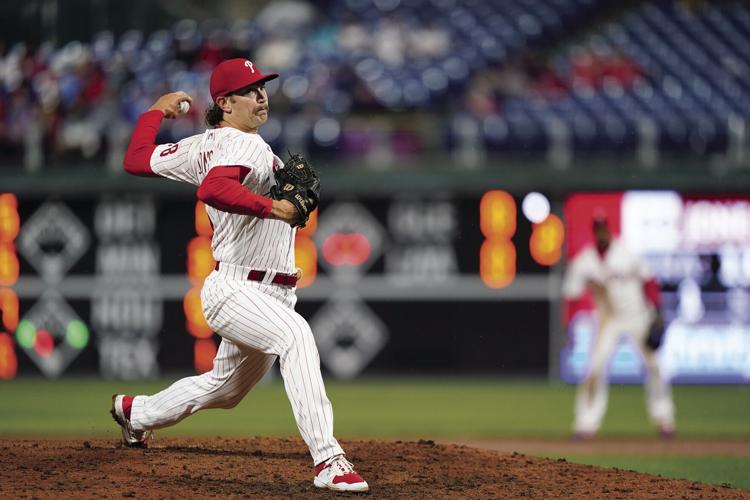 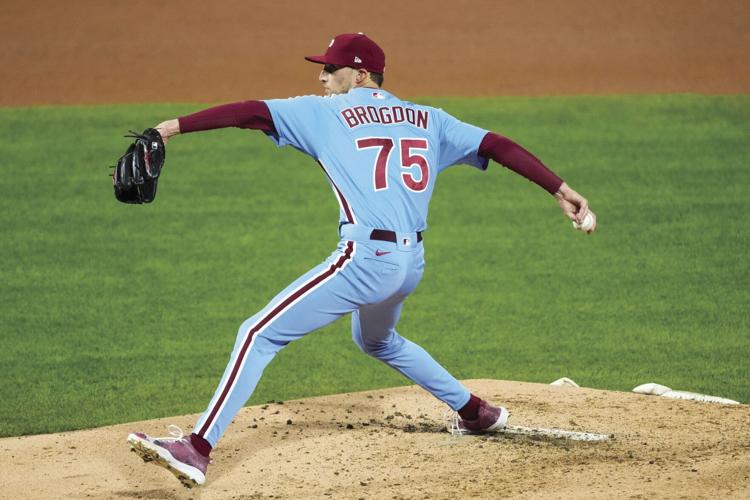 Lewis-Clark State and current Philadelphia pitcher Connor Brogdon throws during Game 5 of the World Series against the Houston Astros on Nov. 3.

Lewis-Clark State and current Philadelphia pitcher Connor Brogdon throws during Game 5 of the World Series against the Houston Astros on Nov. 3.

In his third year with the Philadelphia Phillies, Connor Brogdon did something no other Lewis-Clark State baseball player has done.

Brogdon, who played for the Warriors in 2016 and 2017, became the second Warrior to play in the MLB World Series but became the first to play in the NAIA and MLB championship rounds. Keith Foulke, who played one year for LCSC in 1994, played with the Boston Red Sox in 2004. However, Foulke never participated in the NAIA World Series, something Brogdon did twice, winning two championships.

Brogdon made World Series appearances in Games 2, 3 and 5 for the National League champions. In four scoreless innings of work, the former Warrior ace allowed four hits and struck out seven. In Game 5 alone, Brogdon struck out five of the seven batters he faced on 26 pitches.

Here’s a look at what other local area players did this season:

Damon Jones (Philadelphia/Lehigh Valley): The lefty reliever from Twin Falls has battled injuries since May 2. The former Cougar was placed on the 60-day injured list because of a left shoulder impingement June 27. His last appearance was in a losing relief effort May 19 for Lehigh Valley.

Ian Hamilton (free agent): The three-time All-Pac-12 Conference pick from Vancouver, Wash., made one appearance for the Minnesota Twins before getting traded to the Cleveland Guardians for catcher Sandy Leon on Aug. 2. Cleveland sent the right-handed pitcher to its Triple-A affiliate in Columbus, where he went 0-4 with a 6.27 ERA with the Clippers. On Nov. 10, Hamilton elected to try his luck in free agency.

Nick Tanielu (free agent): The third baseman has played for three different Triple-A affiliates in the past four seasons. After playing 89 games for Texas affiliate Round Rock, the Federal Way, Wash., native elected free agency Nov. 10 and has yet to sign with a new team.

Ian Sagdal (Independent/Mayos de Navajoa): After playing 98 games for Winnipeg in independent ball, Sagdal signed with Mayos de Navajoa of the Mexican Pacific Winter League on Oct. 12. In 35 games the infielder from Wenatchee, Wash., has 21 RBI and nine doubles.

Shane Matheny (San Francisco/Richmond): Matheny moved up to Triple-A Sacramento for three weeks from late July-mid August, but was sent back down to Double-A Richmond on Aug. 19. In 93 games for the Flying Squirrels, the former 23rd-round draft pick hit .254 with 58 walks and 115 strikeouts. In 15 games for the River Cats, the second baseman had 23 strikeouts in 47 plate appearances.

Scott Sunitsch (retired): Dealing with injuries Sunitsch decided to retire July 9. The Biloxi Shucker left-handed pitcher was sent on a rehab assignment June 28 before deciding to leave the sport. Sunitsch, an 85-game starter at Wazzu (2015-18) was 16-11 in his minor league career.

Ryan Walker (San Francisco/Sacramento): Walker was promoted to the River Cats on Sept. 10. In just seven appearances, the former four-year pitcher for the Cougars went 0-1 with a 6.14 ERA.

Andres Alvarez (Pittsburgh/Altoona): The two-time All-Pac-12 selection hit 20 home runs and stole 21 bases for the Double-A Curve. The batting average does need to improve for the shortstop, who averaged .220 in his 368 plate appearances.

Kyle Manzardo (Tampa Bay/Montgomery): Manzardo split his season between High Single-A Bowling Green and Double-A Montgomery. In 93 games, the former second-round pick hit .327 with 22 home runs, 59 walks and 65 strikeouts in his first full pro season. The Biscuit first baseman was named the minor league player of the year for the Tampa Bay Rays. MLB.com currently has Manzardo is the fourth-best prospect in the Rays’ farm system.

Tristan Peterson (Independent/Washington): Peterson played 20 games for the Billings Mustangs of the Pioneer League before moving to the Washington Wild Things, where he performed better. In 32 games Peterson batted .302 with six home runs and 22 RBI, slugging .519 in 134 plate appearances.

Seth Brown (Oakland/MLB): The 19th-round draft pick in the 2015 MLB June amateur draft set career-highs and led the Oakland Athletics in home runs (25), RBI (73), and triples (three). Brown also set a career-best with 51 walks and tied for the team lead with a career-high 11 stolen bases. Out of seven qualifying hitters, the product of Medford, Ore., was fourth on the team with a .230 batting average in 150 games, also a team best.

Blaine Hardy (Independent/Sioux City): Hardy made 23 appearances for the Sioux City Explorers with three starts. The former Detroit and Milwaukee pitcher finished the season with a 4.78 ERA with 51 strikeouts. Since being drafted by Kansas City in 2008, Hardy made 234 major league appearances in seven seasons, going 14-11 with a 3.78 ERA.

Tyler Burch (Baltimore/Bowie): The former NAIA West pitcher of the year recorded two saves for the Bowie Baysox, the Double-A affiliate of the Baltimore Orioles. Burch made 33 appearances and went 0-5 with a 5.40 ERA recording 45 strikeouts in 45 innings.

Joe Riley (Independent/Sultanes de Monterrey): The former Warrior closer is keeping busy this season. In 12 games with the Evansville Otters in the American Association, Riley went 3-1 and recorded one save with a 1.64 ERA. After the summer season ended, Riley was assigned Oct. 11 to Sultanes de Monterrey for winter ball. In 18 appearances with the Sultanes, the Alameda, Calif., native is 1-2 with nine saves. Riley has struck out 25 in 18 ⅔ innings pitched.

Brock Ephan (Independent/Tucson): The former NAIA All-American was named the Pecos League Pacific Division hitter of the year after hitting 14 home runs and knocking in 40 runs in 35 games. Ephan averaged .429 with a slugging percentage of .832. The third baseman went 4-for-14 with a home run in the best-of-3 championship series loss to the Roswell Invaders.

Jake Lamb (free agent): The Seattle native, who has family in the valley, was traded to the Seattle Mariners from the Los Angeles Dodgers for a player to be named later Aug. 2. Lamb played 16 games for Seattle, batting .167 with one home run and two RBI. The former Dodger utility player was released Sept. 24 by the Mariners and has yet to sign with a new team.