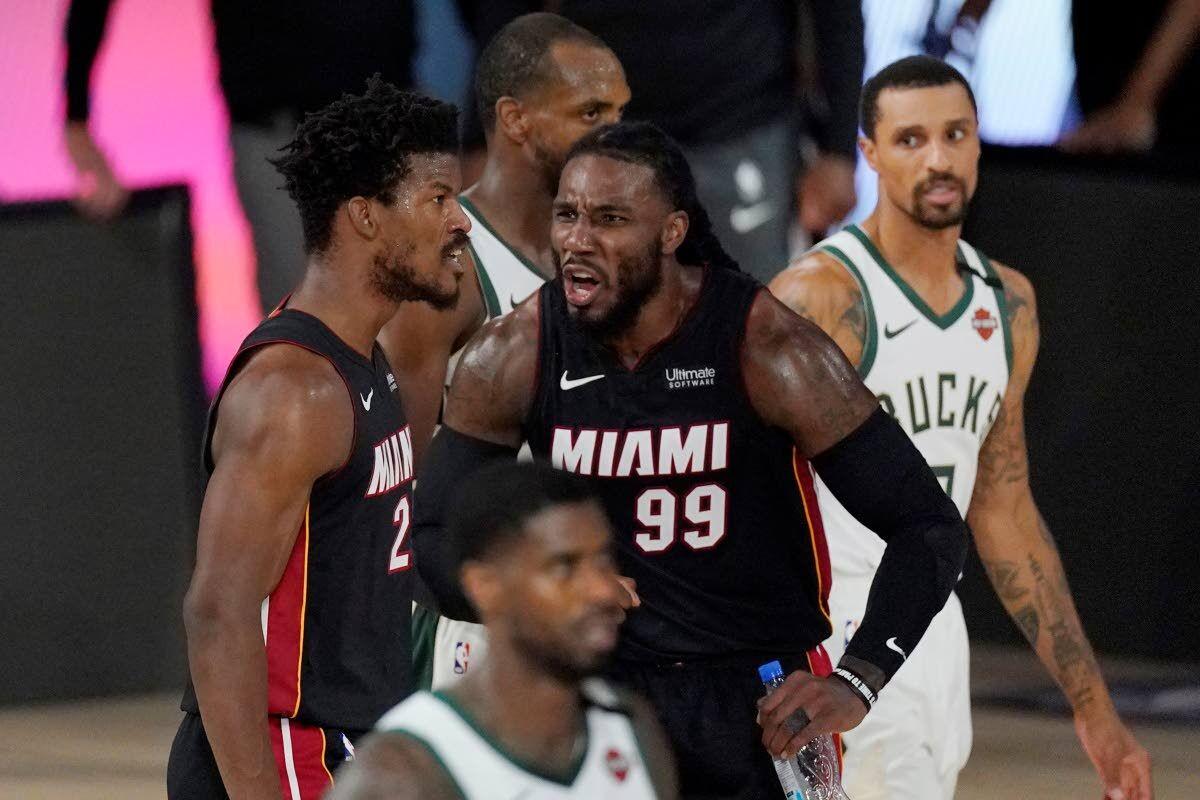 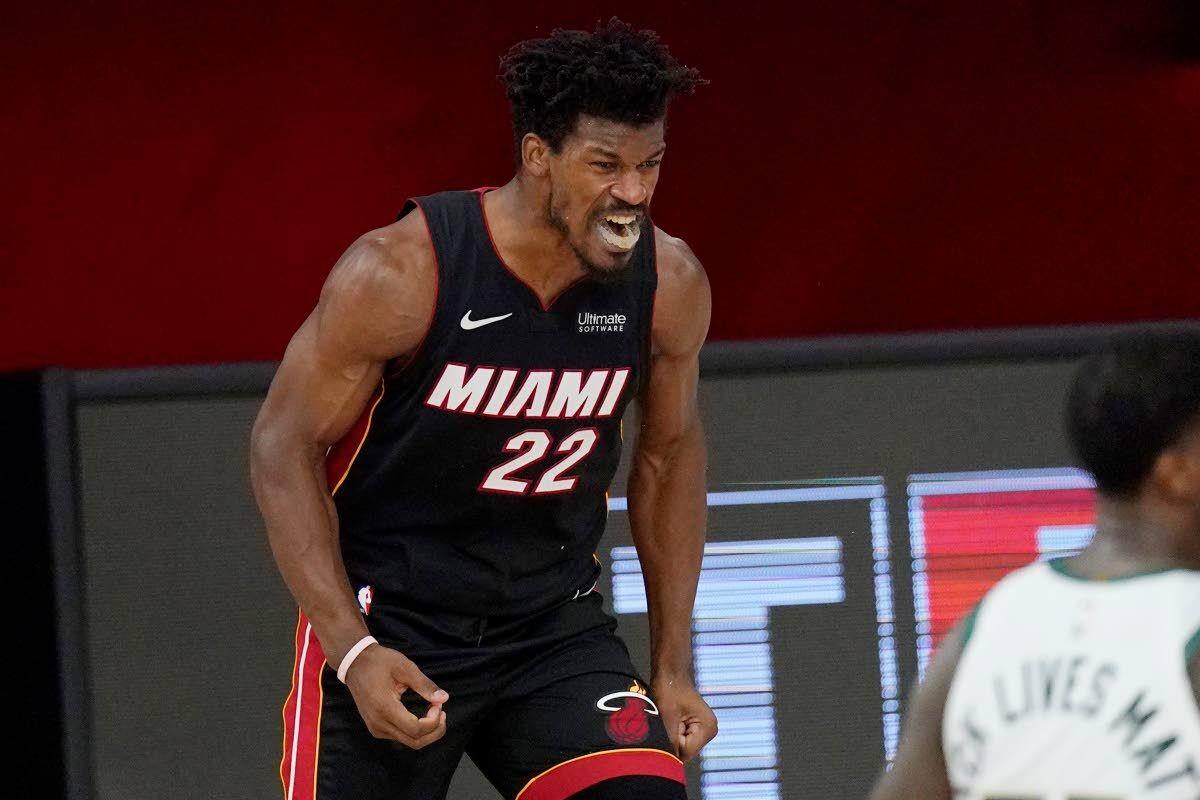 Associated PressThe Heat’s Jimmy Butler celebrates after a dunk in the second half of Friday’s NBA conference semifinal playoff game against the Bucks in Lake Buena Vista, Fla. 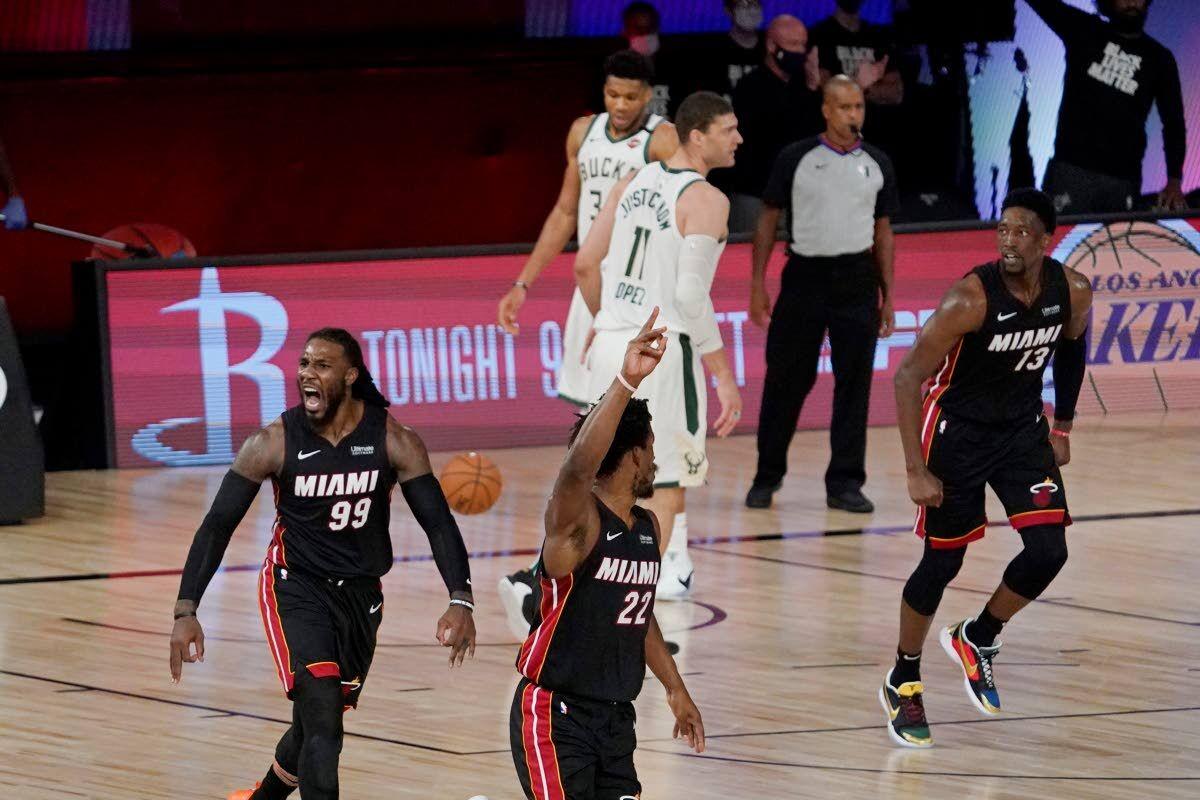 Miami Heat's Jae Crowder (99), Jimmy Butler (22) and Bam Adebayo (13) celebrate as they run up the court in front of Milwaukee Bucks' Brook Lopez (11) and Giannis Antetokounmpo (34) after a basket in the second half of an NBA conference semifinal playoff basketball game Friday, Sept. 4, 2020, in Lake Buena Vista, Fla. (AP Photo/Mark J. Terrill) 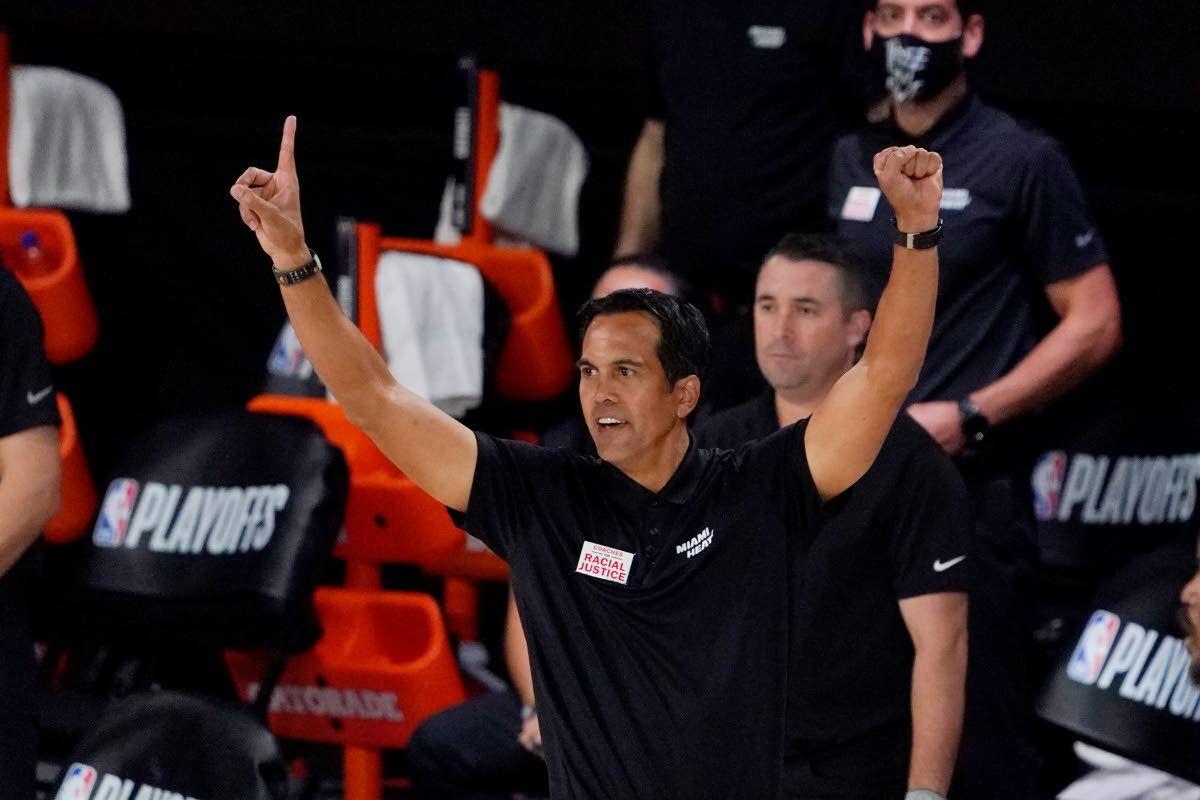 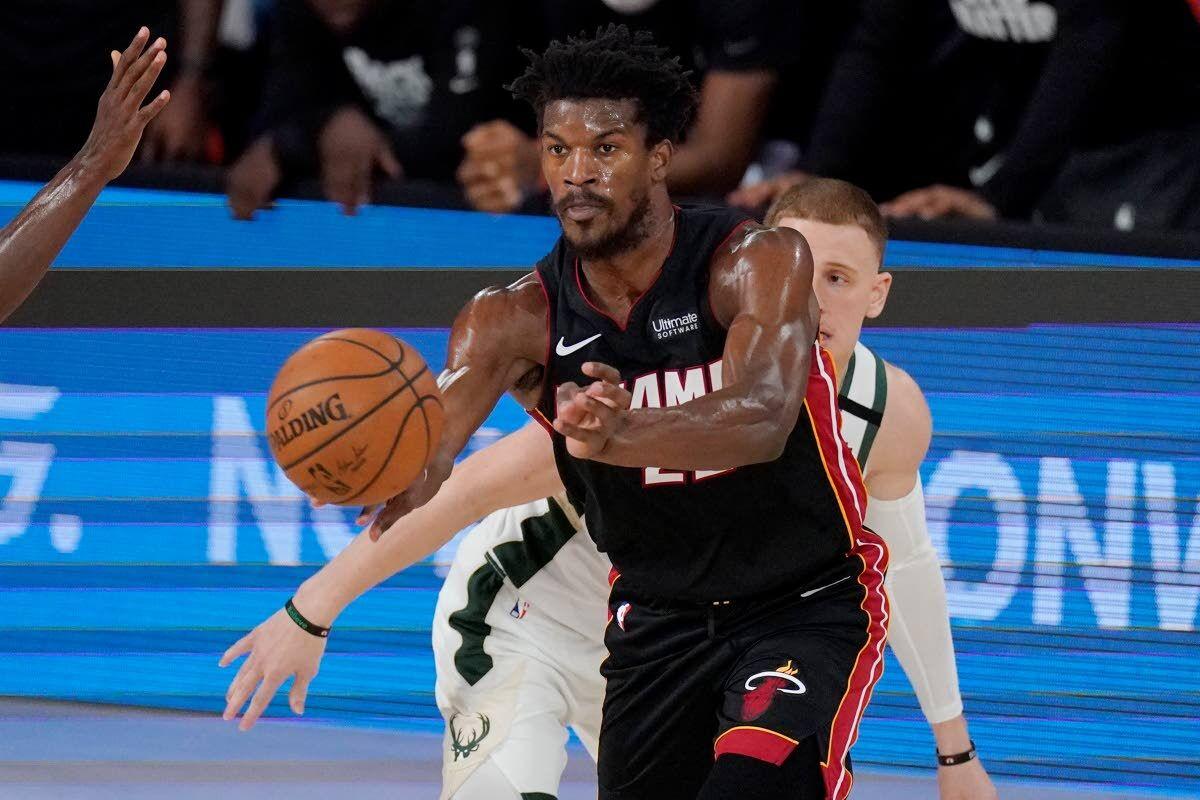 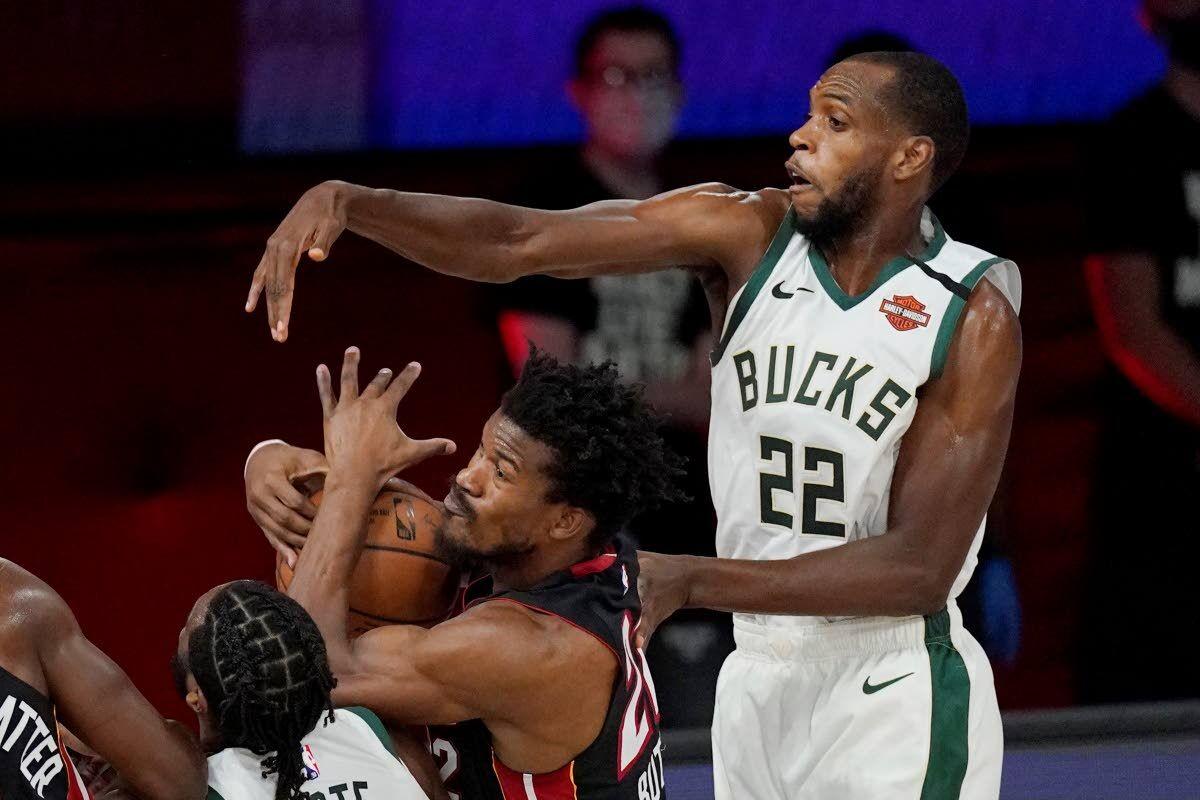 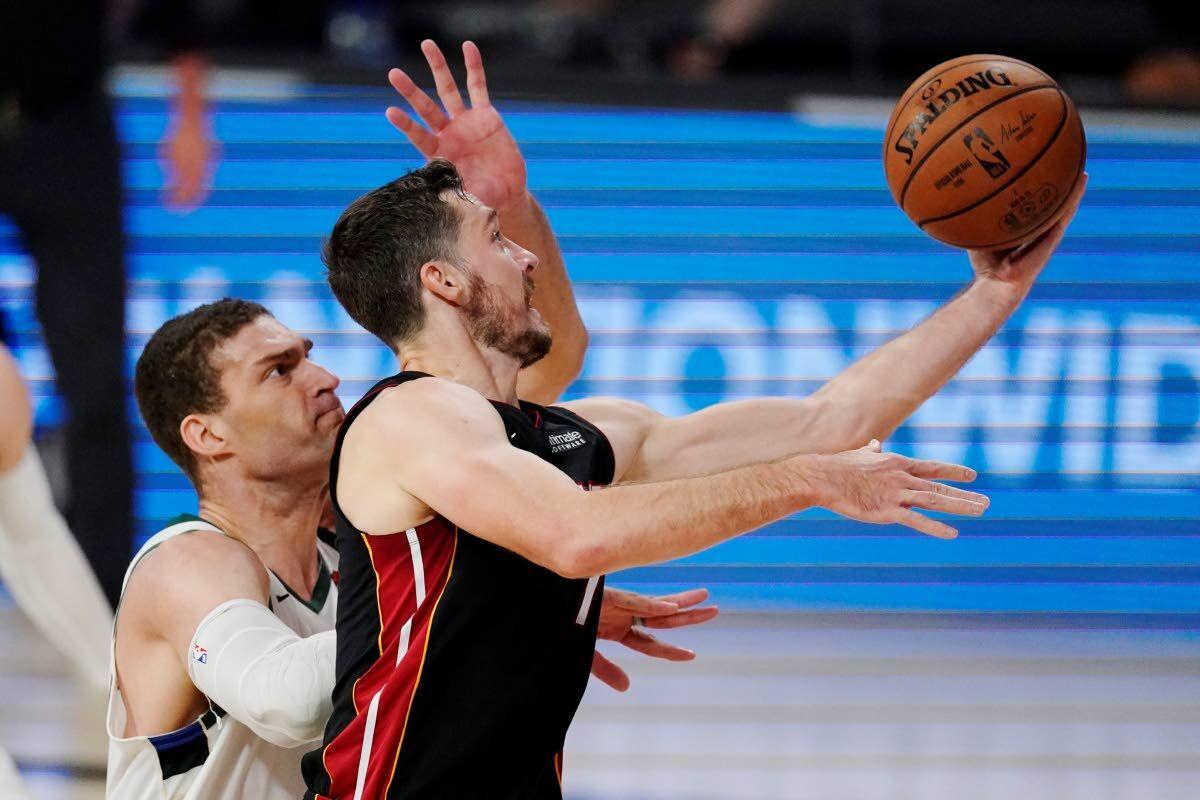 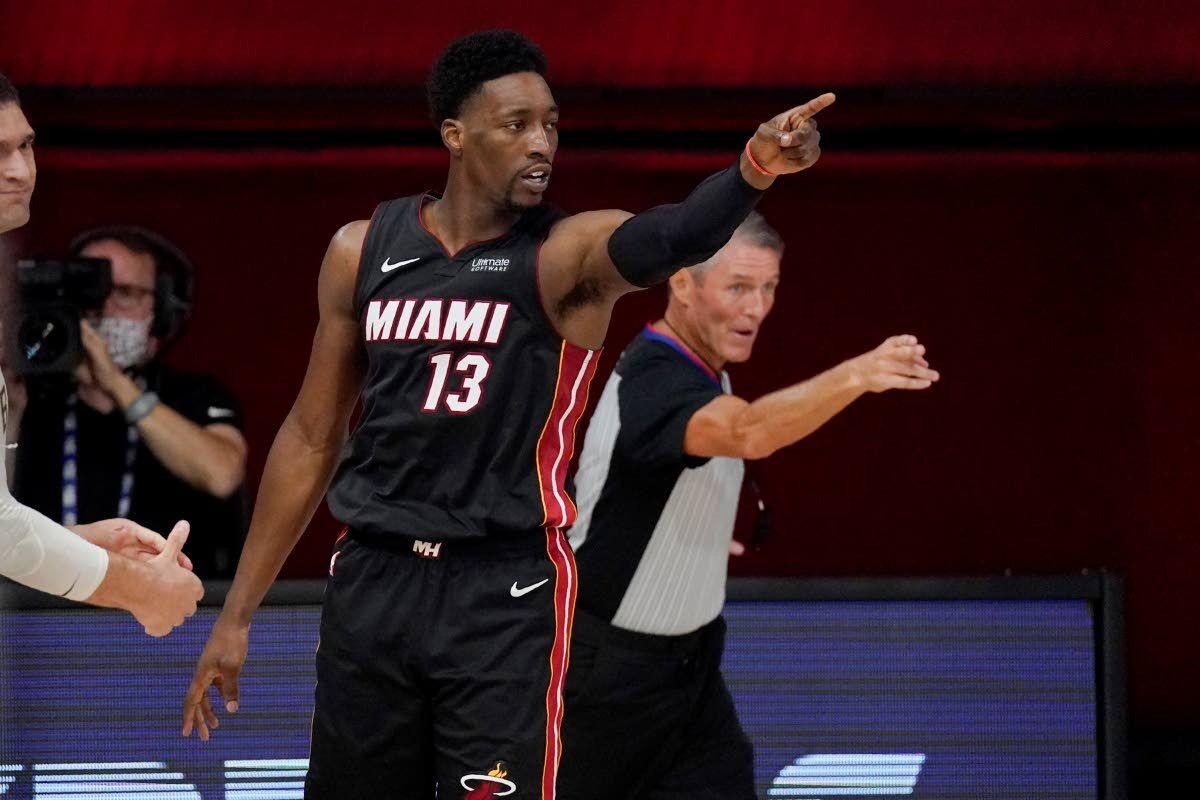 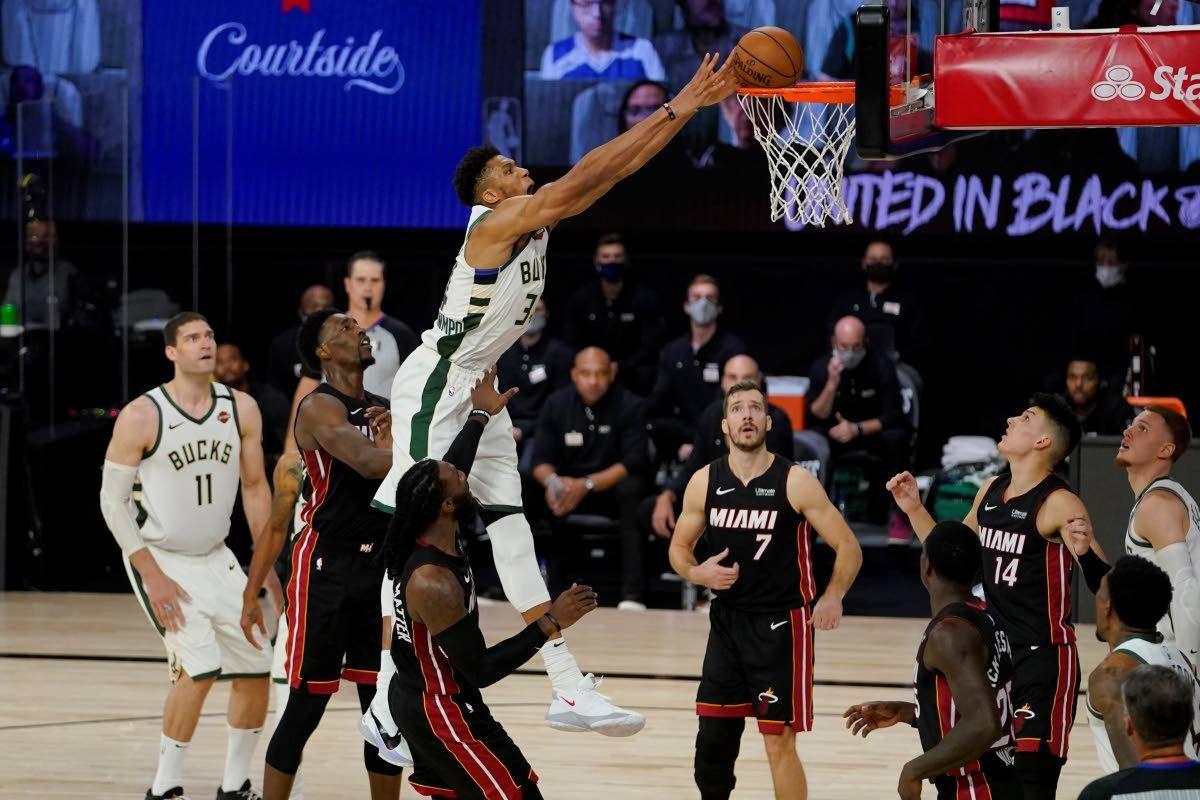 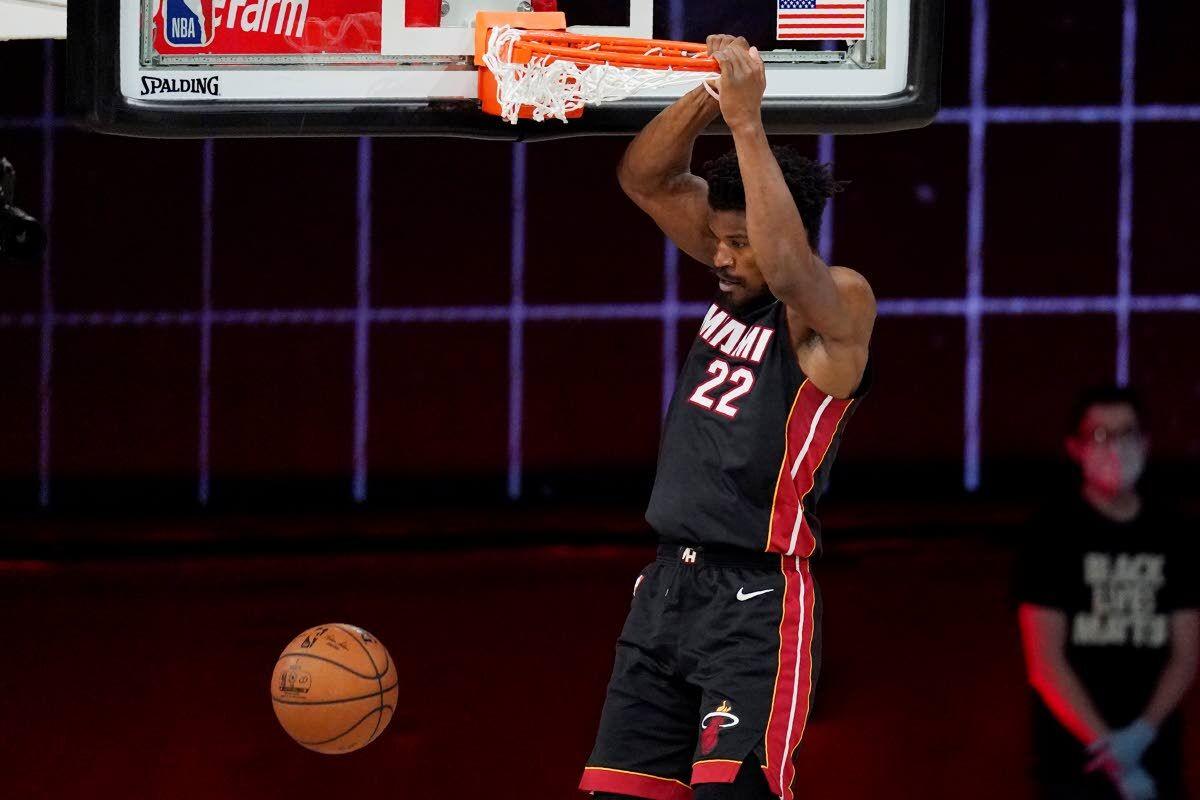 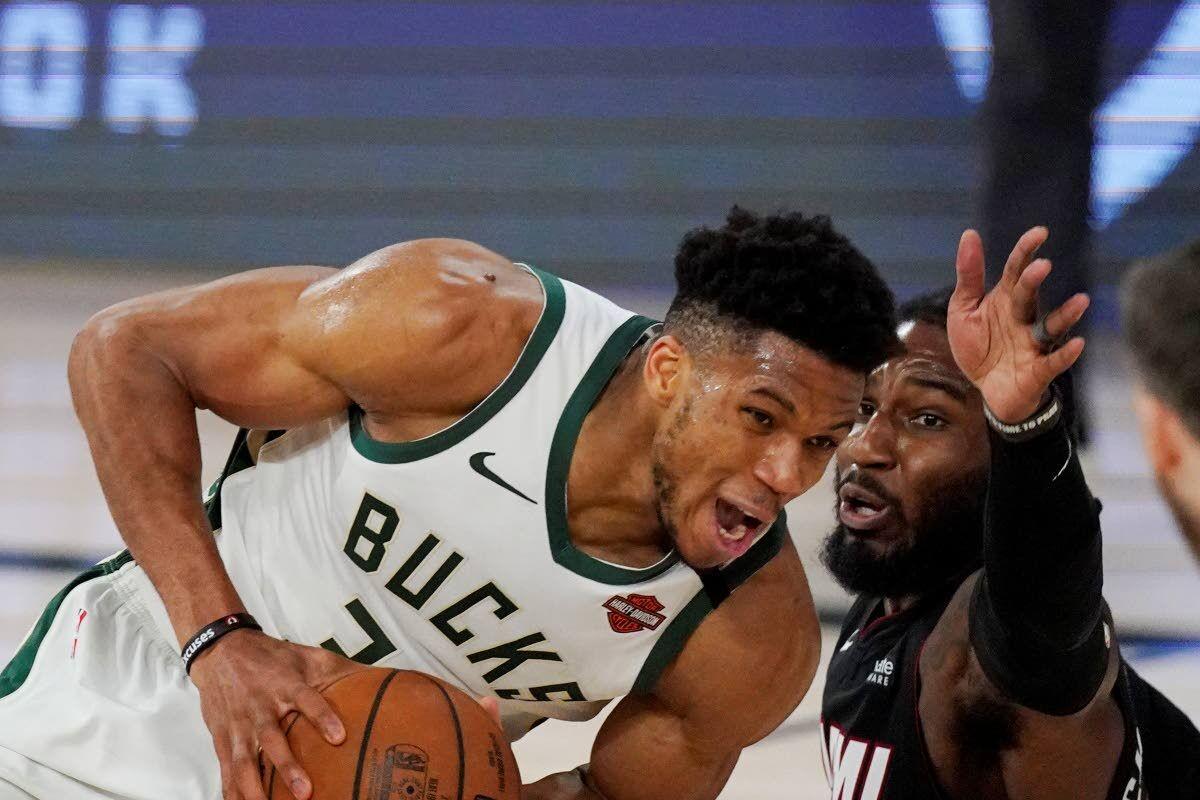 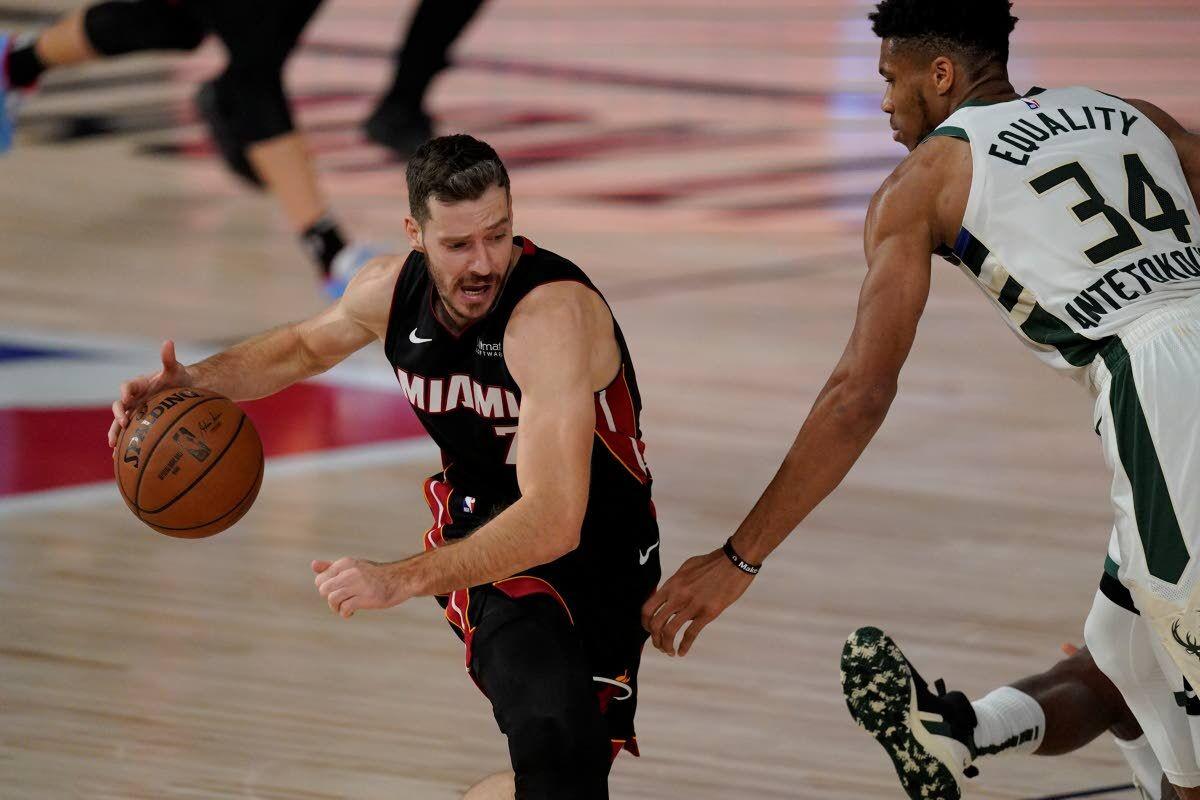 Associated PressThe Heat’s Jimmy Butler celebrates after a dunk in the second half of Friday’s NBA conference semifinal playoff game against the Bucks in Lake Buena Vista, Fla.

Miami Heat's Jae Crowder (99), Jimmy Butler (22) and Bam Adebayo (13) celebrate as they run up the court in front of Milwaukee Bucks' Brook Lopez (11) and Giannis Antetokounmpo (34) after a basket in the second half of an NBA conference semifinal playoff basketball game Friday, Sept. 4, 2020, in Lake Buena Vista, Fla. (AP Photo/Mark J. Terrill)

LAKE BUENA VISTA, Fla. — Jimmy Butler sent the ball out to Jae Crowder, then started celebrating before his teammate even took the shot.

He knew what was about to happen.

The Miami Heat did it again — and have the Milwaukee Bucks, the No. 1 overall seed in the NBA playoffs, on the brink of leaving the bubble weeks earlier than they anticipated.

Butler scored 17 of his 30 points in the fourth quarter, the Heat outscored the Bucks 40-13 in those final 12 minutes — the biggest fourth-quarter margin in NBA playoff history — and topped Milwaukee 115-100 to take a 3-0 lead in the Eastern Conference semifinal series.

“No, I’m not surprised,” Butler said. “I think everybody else in the world might be. But not us here. Not if you wear a Heat jersey, if you’re one of these coaches, if you’re part of this organization, if you’ve been seeing what we’ve been doing all year long, that doesn’t surprise us.”

No team in NBA history has ever won after trailing 3-0.

“It can be us,” reigning MVP Giannis Antetokounmpo said. “It can definitely be us.”

Bam Adebayo had 20 points and 16 rebounds, and Crowder had 17 points to help the Heat improve to 7-0 in this postseason. Brook Lopez scored 22 points for Milwaukee, which got 21 points, 16 rebounds and nine assists from Antetokounmpo — who twisted an ankle in the first quarter and appeared to labor at times.

He said he was fine afterward.

“They made every play,” Bucks coach Mike Budenholzer said. “And we didn’t make enough, obviously.”

The Heat pulled off their biggest fourth-quarter playoff comeback ever. They were down 10 going into the fourth quarter of Game 6 of the 2013 NBA Finals against San Antonio, the game where Ray Allen sent it to overtime with a 3-pointer with 5.2 seconds left on the way to Miami’s most recent title.

Milwaukee led 87-75 going into the final quarter, up 12 with 12 minutes to go in a game that the Bucks knew they almost certainly had to win to keep any realistic hopes of winning a championship alive.

Miami had other ideas.

Tyler Herro opened the fourth with a 3-pointer, Goran Dragic made another 3 about three minutes later to cut the deficit to four, and the Heat were off and running. Butler had the next nine Miami points as the Heat went back on top, and he set Adebayo up for a short basket with 4:20 remaining to restore a 100-99 lead.

And Butler might have delivered the dagger with a pass; he found Jae Crowder for a left-wing 3-pointer with 2:15 left to put Miami up 107-100.

Butler knew it was good — he was running the other way, his arm in the air, before Crowder’s shot even found the inside of the net.

“It just shows how good of a basketball player Jimmy is,” “It’s not just about his scoring. ... He does whatever’s necessary to help your team have a chance to win and that’s on both ends of the court.”

Milwaukee needed less than five minutes to go on a 21-6 run that put the Bucks up 87-73 late in the third. Lopez and George Hill combined for the first 11 points of that run.

But the fourth, all Miami.

LAKE BUENA VISTA, Fla. — The Los Angeles Lakers are playing from behind again in these NBA playoffs.

James Harden scored 36 points and the Houston Rockets ran away from the Lakers, the second straight round the No. 1 seed in the Western Conference lost its opener.

Russell Westbrook added 24 points, nine rebounds and six assists, and Eric Gordon had 23 points for the Rockets, the No. 4 seed who had just one day of rest after needing seven games to win their first-round series.

They sure didn’t look tired, flying around the court all night to make up for the size disadvantage they face with their small-ball style. They forced 17 turnovers that led to 27 points and played the much bigger Lakers even on the backboards.

The Lakers never led after the first quarter and the Rockets blew it open by starting the fourth with a 16-3 run, turning a six-point advantage into a 101-82 cushion on Harden’s basket with 7:15 to play.

Anthony Davis had 25 points and 14 rebounds for the Lakers. LeBron James had 20 points, eight rebounds and seven assists.

By the Associated Press