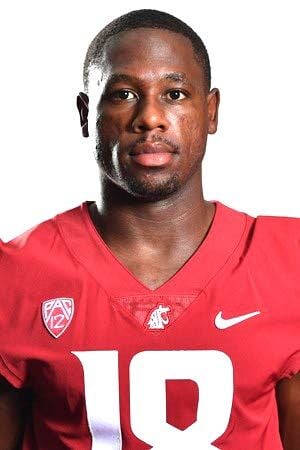 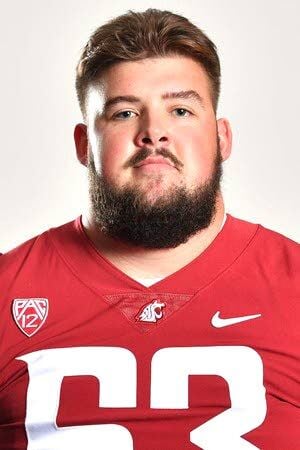 From his vantage point on the sideline, Washington State football coach Nick Rolovich couldn’t tell which of his defenders had made a diving interception in the second quarter last week in a 31-24 win against Oregon State.

But he knew he liked it.

The stealthy thief was safety George Hicks III, who Monday was named Defensive Player of the Week in the Pac-12. Another Cougar, Liam Ryan, drew Offensive Lineman of the Week honors.

In a second-and-10 play at the Oregon State 23-yard line Saturday at Pullman, Beavers quarterback Chase Nolan threw a short pass that appeared to be on target for tight end Luke Musgrave near the sideline.

In a blur, Hicks torpedoed into the picture and picked it off.

“I didn’t even know that was him who got that pick,” Rolovich said. “That happened so fast, and then there was a cloud of crimson around. I was trying to work the refs to make sure they saw his foot get in. The ref said, ‘I couldn’t even see it, it was so fast.’ But helluva play.”

Hicks, a senior who converted from cornerback to safety this year, also made the game-saving tackle, stopping OSU receiver Trey Lowe less than a yard shy of a first down on the 5-yard line with 33 seconds left. He finished with 10 tackles.

Ryan, a senior left tackle who has started 36 consecutive games, was on the field for 71 plays and graded out at 96 percent with six knock-downs, according to WSU. He allowed no pressures on 47 pass attempts.

“He has a big personality but I think he’s even had some transformation in his approach in life,” Rolovich said. “Cares a bunch about this team. He changed his body. The scouts are impressed with him this year because of some of those physical changes, and he’s playing good football.”

Rolovich said there was no update on his application to WSU for a religious exemption from a state mandate requiring education workers to be fully vaccinated for the coronavirus by Monday.

After the game Saturday, he had confirmed the accuracy of reports that he was seeking the exemption, ending months of near-silence from him on his vaccination plans.

Because Rolovich hails from a Catholic background, he was asked Monday if he identifies as Catholic. He sidestepped that question, and did the same when asked, “If you end up being fired, there’s obviously a lot of people that can be affected by that decision. Just how do you feel about that?”

“I’m going to leave that alone,” the coach replied. “I think I answered some stuff Saturday, and I’d like to talk about Stanford, our football team and move forward in that direction.”

“All I hear is there’s improvement,” he said. “The arrow is pointing up as far as his recovery.”

At one point, Gray was listed in serious but stable condition after a shooting incident in Pullman that left one person dead. He was taken by Life Flight helicopter to a Spokane hospital.