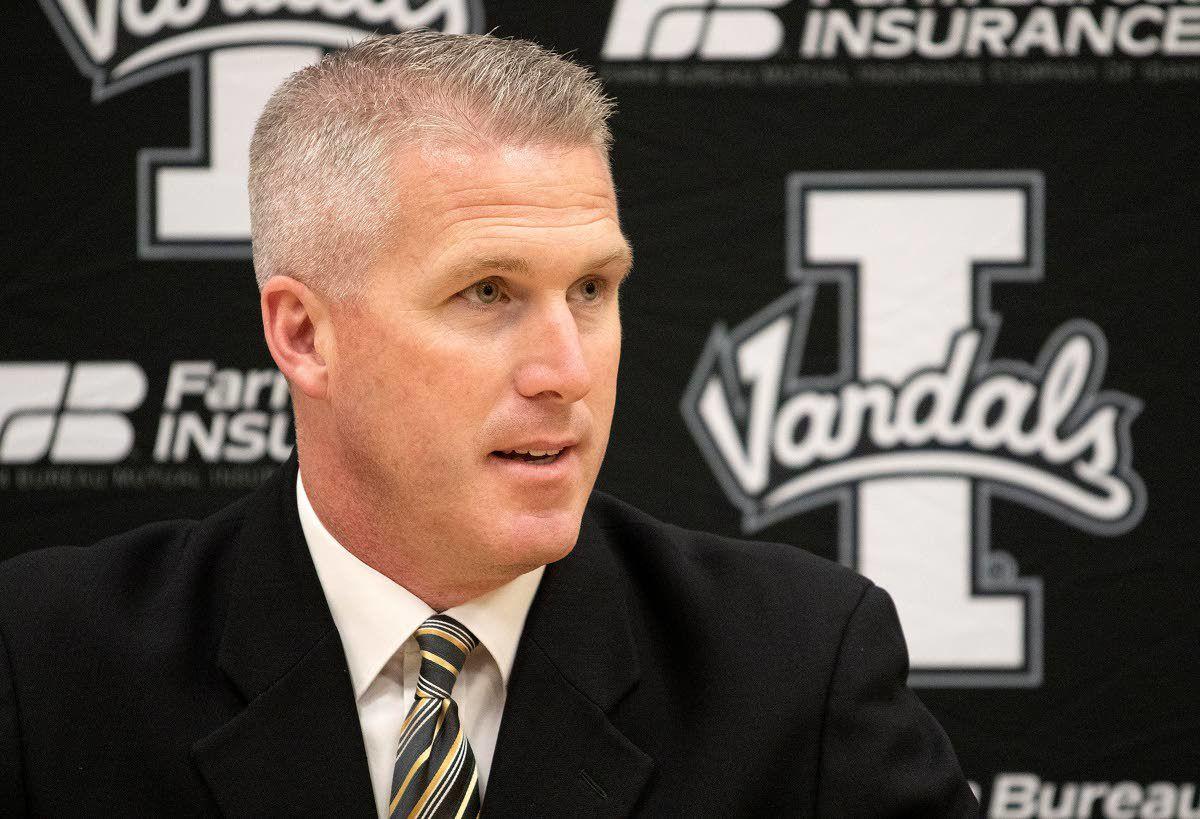 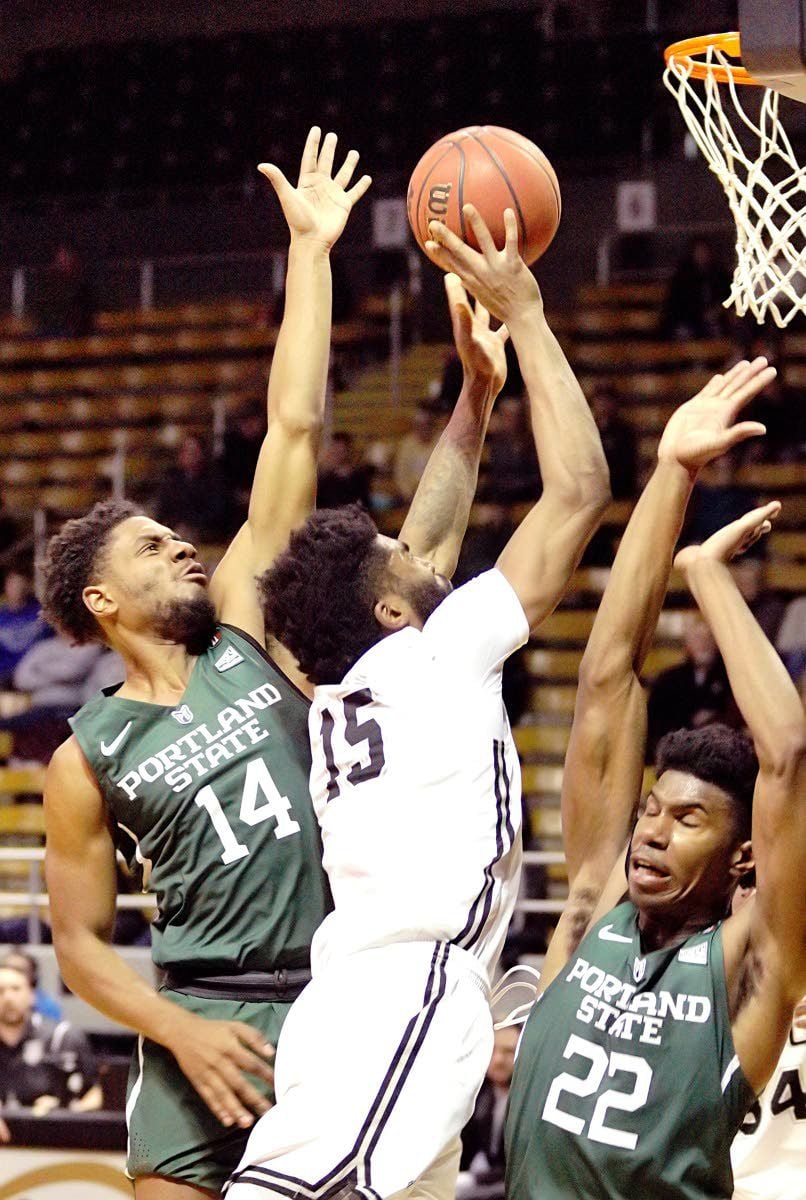 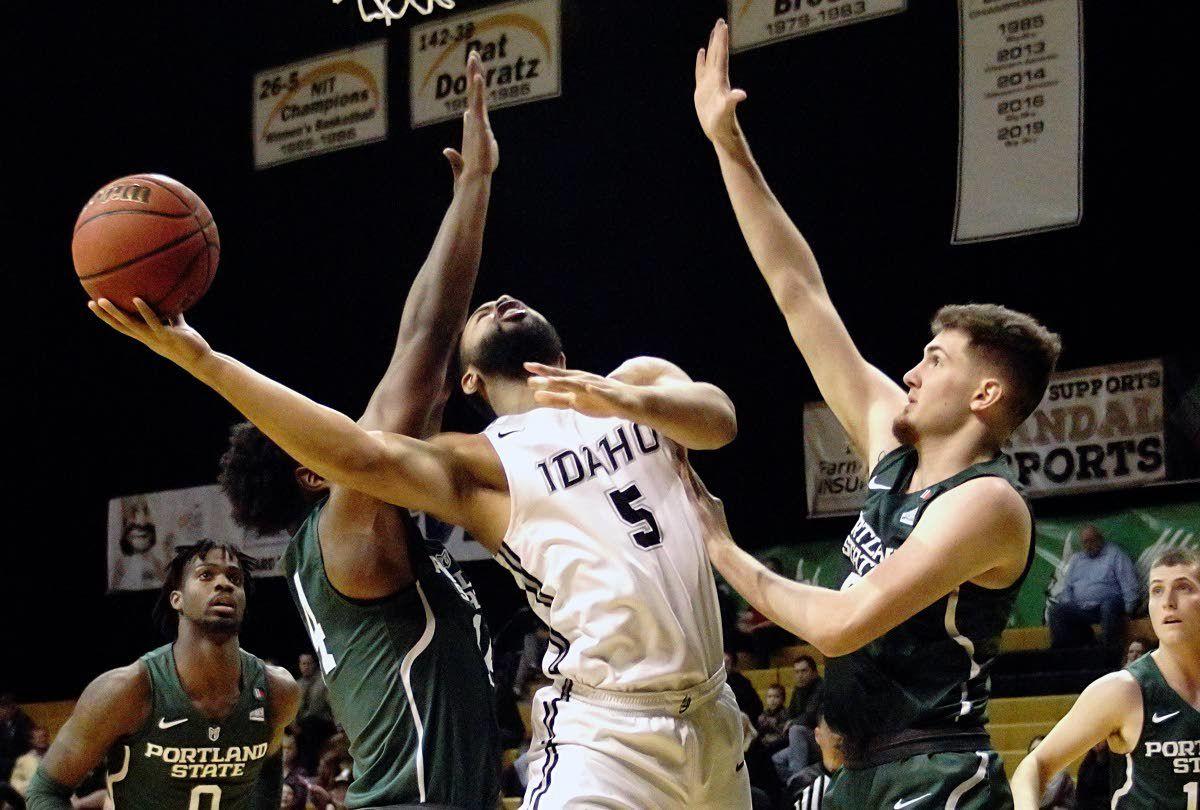 Idaho's Quinton Forrest (5) battles for a shot under the hoop against a pair of Portland State defenders Thursday night.

Idaho's Quinton Forrest (5) battles for a shot under the hoop against a pair of Portland State defenders Thursday night.

The 75-71 loss ended up being the final game for former UI coach Don Verlin, who was fired in the offseason after 11 seasons at the helm.

Here are some key notes heading into the contest:

You just have to look at Idaho’s first two conference games — a pair of road losses by a combined three points to Idaho State and Weber State — to see the parity in the Big Sky this season.

A look at UI’s road record of 0-6 and it’s more apparent how important home games are in the standings.

Idaho bounced back from its pair of heartbreakers to beat Portland State 72-61 on Jan. 2 to improve to 4-2 at home.

A win today would make this season better than UI’s disastrous 5-27 campaign from a year ago.

“You always have to defend your home court,” Idaho interim coach Zac Claus said after the PSU game. “That’s no matter what conference you’re playing in.”

Claus recalled looking at the conference’s final scores ­after the Dec. 30 loss to Weber State — a 69-68 Weber win after the Vandals missed a pair of would-be game-winners in the game’s closing moments.

“You see all those scores from Monday night after the night is over and the only big score was a six-point deficit,” he said. “Everything else was a one-possession game.

“The margin for error is so small. It’s always been that way in this conference.”

Speaking of close games, it might not be smart to get into a tight contest with the Bobcats — especially if they have the lead.

Montana State leads the Big Sky in free-throw shooting at 74.1 percent. The guy they want at the line is senior guard Harald Frey, who ranks second in the conference at 88.2 percent. He’s missed only nine times in 76 tries.

But the Oslo, Norway, native is more than just a good free-throw shooter. He does a bit of everything and rarely leaves the court.

What Montana State lacks is on defense. MSU is last in the conference in steals (5.7 per game) and turnover margin (-3.60).

Good to be back

For the first time in almost a full year, Idaho appears to be nearing full strength.

Vandal fans saw 7-foot center Jack Wilson play in his first home game against Portland Stte after sitting out a year because of NCAA transfer rules. He is averaging 5.5 points and 4.5 rebounds through his first four games.

Senior forward/guard Marquell Fraser also saw his first home action since a Nov. 26 loss to North Dakota State. He missed almost a month with an undisclosed injury and is a welcome addition back.

When healthy, the 6-3 Fraser is a player who isn’t afraid to dive for a loose ball or grab rebounds against taller opponents. He is second on the team in rebounding (5.0) and fourth in scoring (7.6) — numbers that should improve as he sees more time on the court.

“I enjoy doing the stuff that others don’t really enjoy doing,” Fraser said after scoring nine points against PSU.

Also back is reserve guard Ja’Vary Christmas. The Portland native was in a walking boot much of the preseason. He played seven minutes off the bench against the Vikings.

Claus said the return of players like Fraser and Christmas has helped lighten the load in practice.

“It makes practice a whole lot better because then I don’t have to get out there as much, so that’s a good thing,” Claus said.

But it also poses its challenges since there aren’t as many minutes available during game time, he said.

“You gotta continue to have the buy-in from everybody that it’s strictly about the group and the group’s success,” Claus said.

Senior guard Trevon Allen is in his second year as the clear leader for a young Vandals team, and he’s kicked his play up a notch this season.

After leading Idaho at 14.0 points per game last season, Allen failed to receive a spot on the Big Sky’s all-conference preseason teams.

Now, he’s the second-leading scorer in the conference at 19.3 points per game.

The only player with more? Preseason player of the year pick Jerrick Harding of Weber State at 19.9.

“(Allen) has a tremendous maturity about him,” Claus said. “He understands what his strengths are, he understands that we are going to lean on him to score. But at the same time, he’s figured out what his other teammates can do.

“He’s a team guy and all he worries about is the final score.”