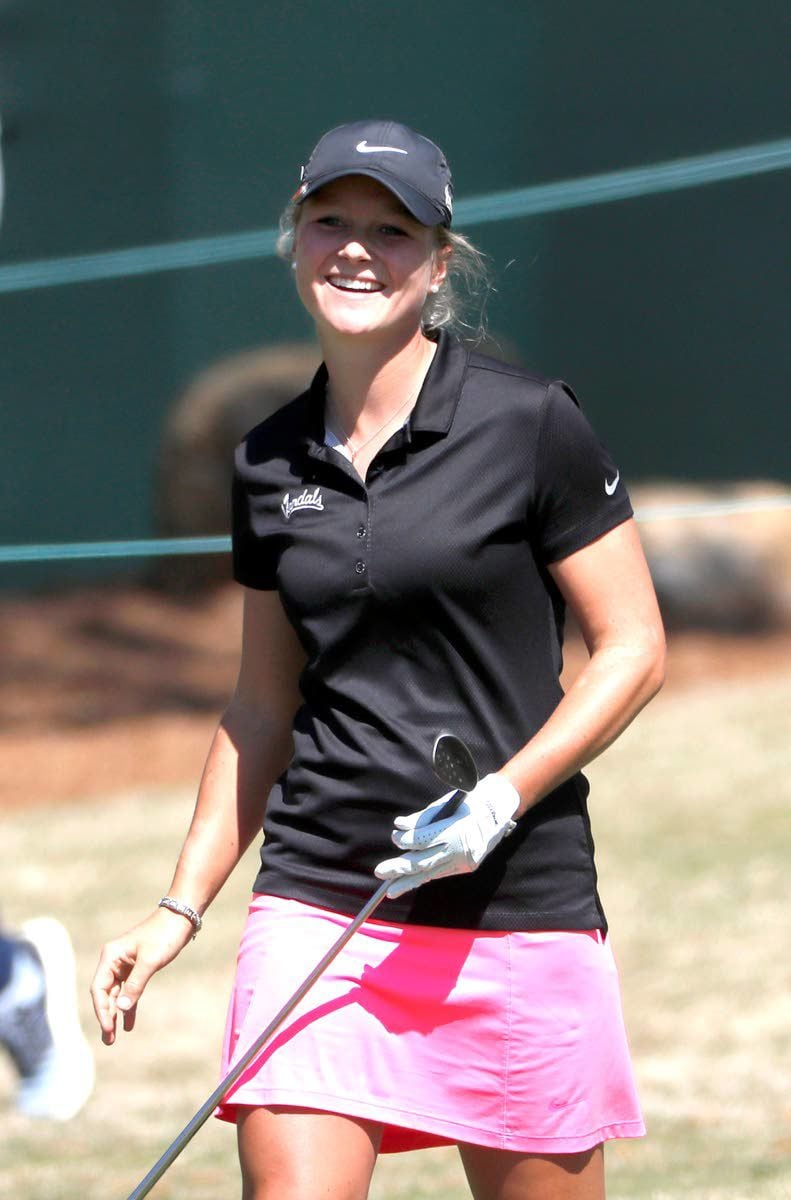 Sophie Hausmann, of Germany, smiles after sinking a putt on the 11th hole during the first round of the Augusta National Women's Amateur golf tournament at Champions Retreat in Evans, Ga., Wednesday, April 3, 2019. (AP Photo/David Goldman) 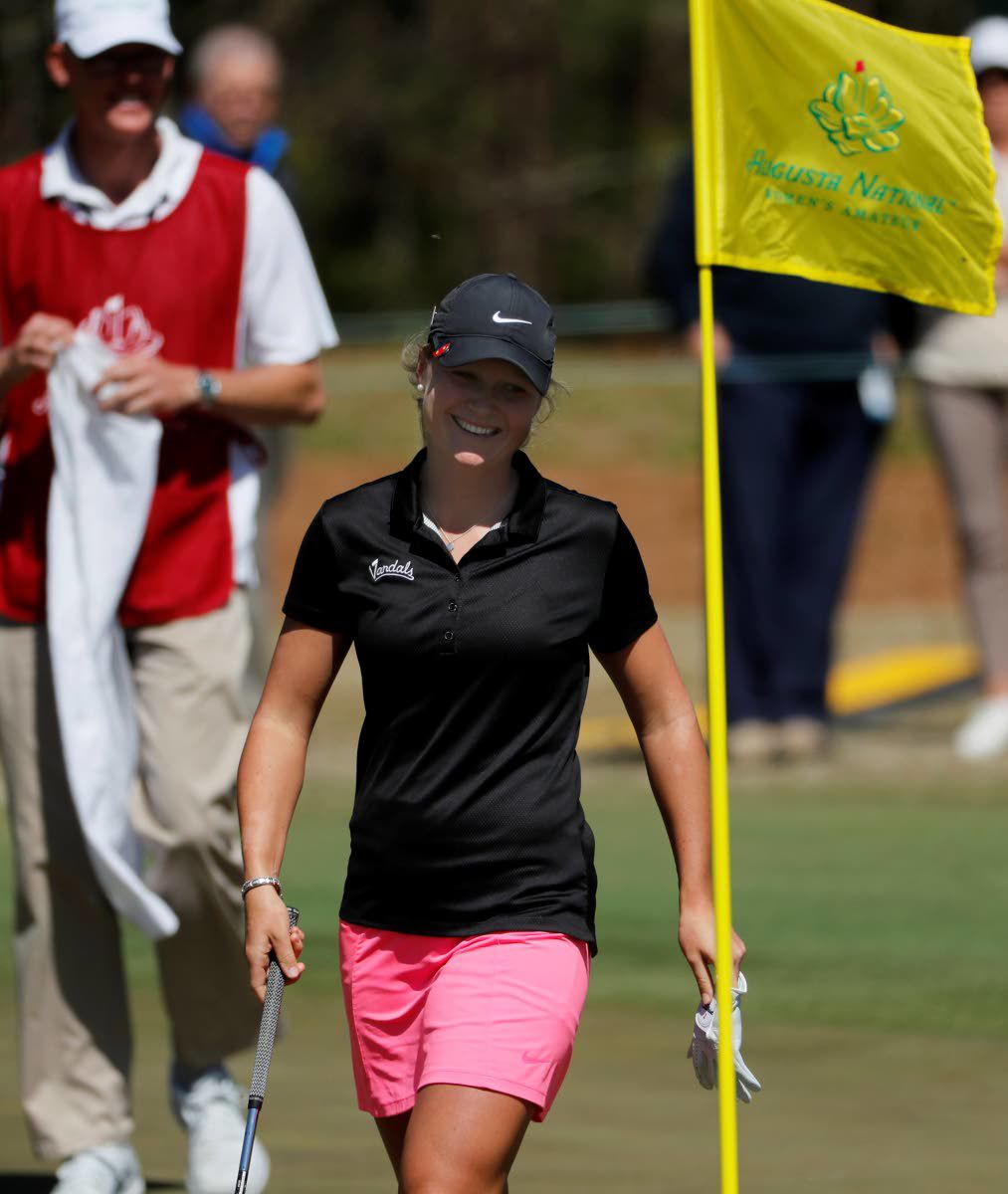 Sophie Hausmann, of Germany, smiles after sinking a putt on the 11th hole during the first round of the Augusta National Women’s Amateur golf tournament April 3, 2019, at Champions Retreat in Evans, Ga. 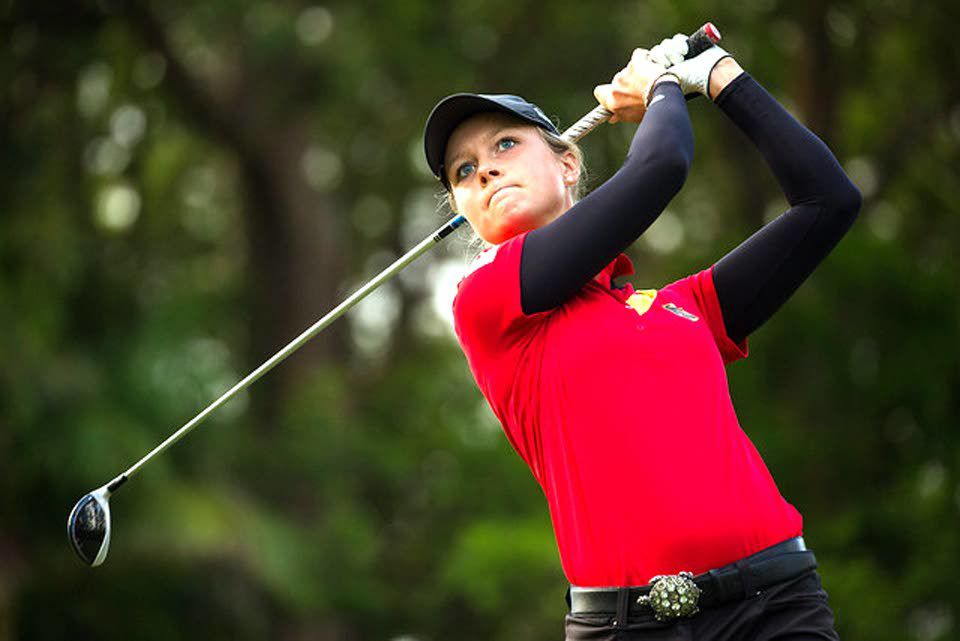 Former Idaho golfer Sophie Hausmann shoots during the second stage of Ladies European Tour qualifying school at Spain's La Manga Club in January. Hausmann finished in the top 15 in both stages to earn her card for the tour.

Sophie Hausmann, of Germany, smiles after sinking a putt on the 11th hole during the first round of the Augusta National Women's Amateur golf tournament at Champions Retreat in Evans, Ga., Wednesday, April 3, 2019. (AP Photo/David Goldman)

Sophie Hausmann, of Germany, smiles after sinking a putt on the 11th hole during the first round of the Augusta National Women’s Amateur golf tournament April 3, 2019, at Champions Retreat in Evans, Ga.

Former Idaho golfer Sophie Hausmann shoots during the second stage of Ladies European Tour qualifying school at Spain's La Manga Club in January. Hausmann finished in the top 15 in both stages to earn her card for the tour.

Sophie Hausmann’s accolades and lasting memories as an amateur include showings in the inaugural Augusta Women’s Amateur Championship last year and the 2018 U.S. Open.

In the midst of the former two-time Big Sky MVP/league champion’s distinguished career at Idaho, Hausmann rose into the top 50 of the World Amateur Golf Rankings. A native of Germany, Hausmann played with pro notables, and puffed up her international amateur resume like she was half on tour, simultaneously captaining the Vandals in a golden era of golf under coach Lisa Johnson (now of Nebraska).

The even-keeled 22-year-old from Nottuln — just north of Dortmund — scraped the ceiling for amateurs. Since graduating last May, the now-professional is facing a new kind of grind.

“You have to play consistent, but you also have to play at the top of the field,” Hausmann said by phone from golf friend and German professional Sophia Popov’s house in Phoenix, where she’s staying for the time being while the sports world looks for answers during the spread of the coronavirus. “Now I actually play for money, so go for it. Now you need to consider, ‘If I’m not making the cut, maybe I should play a little different.’ ”

For the next few months, it’s a game of wait and train, and hopefully make enough money to last.

Hausmann earned a slot on the Symetra Tour — an LPGA developmental tour — by passing Stage 1 at Q-school in Southern California last August, three months after she graduated from UI. A narrow miss at a Florida-based Stage 2 in October stymied her LPGA aspirations, for now.

She played one tournament on the Symetra Tour, which has canceled upcoming events. Hausmann placed 22nd at Florida’s Natural Charity Classic in early March.

Symetra play is set to resume May 8 with the IOA Invitational in Milton, Ga. In August, Hausmann will return to the Gem State for the Circling Raven Championship in Worley. While she was a Vandal, the team went on two retreats to the Coeur d’Alene Casino course.

Until then, she’s keeping herself busy with the Cactus Tour in Arizona, a “mini-tour” that’s seeing its participation numbers rise amid all the cancellations.

“It’s like the one tour we can play on, but usually entry fees are pretty high and only the top-10 players are making money,” said Hausmann, who played her first Cactus Tour tournament with some friends last week, placing ninth with a 5-under at Phoenix’s Moon Valley Country Club. “Wednesday it was just pouring rain, and we’re like, ‘Why did we sign up for this?’ But we kinda like to play in it, just because we can compete.”

Hausmann has been honing her game at FireRock Country Club in nearby Fountain Hills. An assistant manager there just happens to be an Idaho alumnus.

“He told me he was in the (Pro Golf Management) program, so that’s pretty funny,” Hausmann said. “He said, ‘You went to Idaho, you’re good.’ … I’m fortunate I can stay at a friend’s house, and don’t have to pay anything.”

She holds a professional card for the Ladies European Tour, which has also scrapped approaching events. In January, she glided comfortably through LET Q-school at brisk La Manga Club in Spain, placing fourth and 15th, respectively, in the two stages — carding a fourth-round 66 in Stage 1, and maintaining low-70s in the second — to earn pro status.

Hausmann opened her professional career in December at luxurious Vipingo Ridge in Kenya, where she tied for 34th and pocketed some earnings. Afterward, she appeared in but missed the cut at two Australian events, featuring “kangaroos on the course.” Then the LET, like many sports leagues worldwide, went quiet.

So Hausmann jumped to Symetra. She figures she’ll lose her LET card because the travel is grueling, and she probably wouldn’t be able to hit the necessary number of events.

“It would make sense to stay on the LET, because there’s so much money in it, and they’ve played so many more tournaments the past couple years,” Hausmann said. “But because I want to play in the U.S., I feel like Symetra prepares me better for it. You still play for money, and it’s good money. And the level is kinda similar. I’d say it’s maybe a little better here. I don’t want to have to go back and forth (between Symetra and Europe).”

In August, Hausmann will get another crack at LPGA qualifying school. She missed out on Stage 3 by a single stroke last October at Plantation Golf and Country Club in Venice, Fla.

“I shot 3-under in four rounds and missed it by one,” she said. “Even par made it the year before, but this year the weather was better. In LET Q-school I shot 2 or 3 over and got my card. It just all depends.”

Hausmann could make the jump straight to the LPGA Tour if she ends the year in Symetra’s top 10. That’s obviously no easy task, considering she’s now vying against hungry high-tier amateurs, and professionals like herself. Yet she’s grown increasingly comfortable with her driver, and she’s added yardage, too, as her back has improved from an injury sustained early in college. Her putting has also seen tremendous leaps in the last two years. She said she can settle, “visualize” and “execute” much better on greens.

But there’s a certain heightened level of individuality that comes with professional golf, too. She must plan her own travel and find caddies by the tournament — her parents, Katrin and Jens, had sometimes caddied for her at notable amateur tournaments.

“It’s fun, I love it, but it can get a little exhausting,” she said. “But at the end of the day, especially on the European Tour, it can feel like one crazy, big family.”

Hausmann credits UI for her more “chilled-out” mentality and cold-weather resistance. And in play, she still can hear the voice of the person who recruited her because of what Hausmann was achieving — then continued to achieve — in the amateur international scene.

“I sometimes think, ‘What would Lisa (Johnson) say right now?’ ” she said with a laugh. Hausmann has remained close with Johnson, who caddied for her at the U.S. Open. “ ‘Sophie, is that really the play, or should you lay up, trust your wedge game and go for a birdie?’ ”