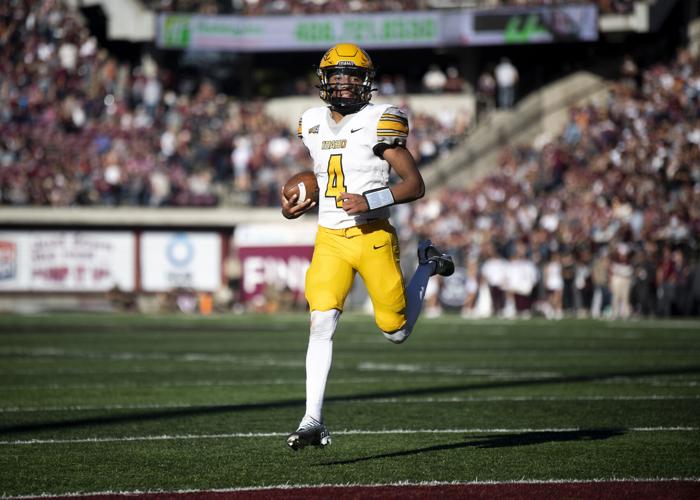 Idaho Vandals quarterback Gevani McCoy (4) runs the ball into the end zone for a 2-point conversion during the Big Sky Conference football game between the Griz and Idaho at Washington-Grizzly Stadium, Saturday, Oct. 15, 2022. 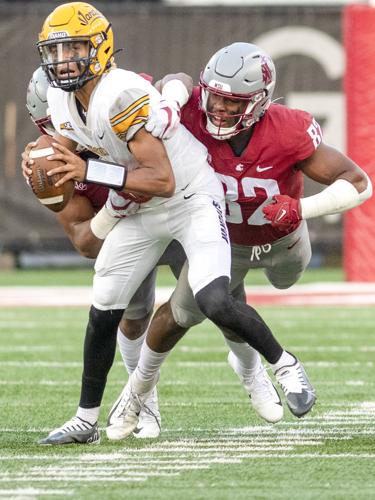 Idaho Vandals quarterback Gevani McCoy (4) is sacked by Washington State Cougars linebackers Daiyan Henley (1) and Travion Brown (82) during the first quarter of the Battle of the Palouse football game in Pullman. 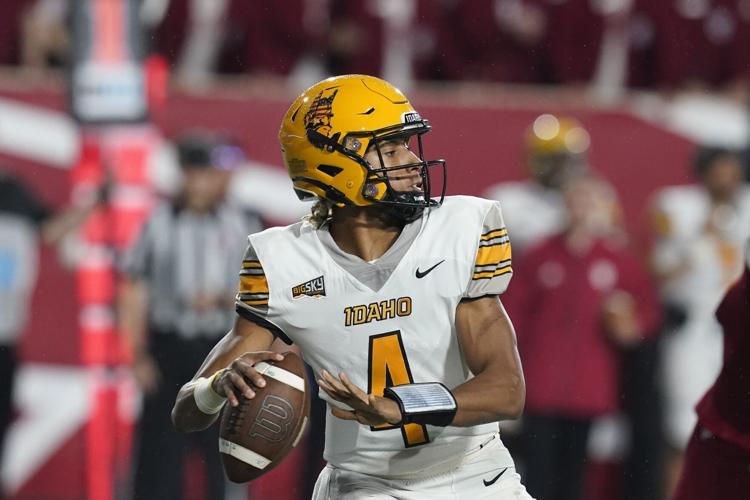 Idaho quarterback Gevani McCoy prepares to throw a pass during the first half of a game against Indiana in Bloomington, Ind.

Idaho Vandals quarterback Gevani McCoy (4) runs the ball into the end zone for a 2-point conversion during the Big Sky Conference football game between the Griz and Idaho at Washington-Grizzly Stadium, Saturday, Oct. 15, 2022.

Idaho Vandals quarterback Gevani McCoy (4) is sacked by Washington State Cougars linebackers Daiyan Henley (1) and Travion Brown (82) during the first quarter of the Battle of the Palouse football game in Pullman.

Idaho quarterback Gevani McCoy prepares to throw a pass during the first half of a game against Indiana in Bloomington, Ind.

It has been quite the ride for Idaho’s freshman quarterback Gevani McCoy.

McCoy entered the season as one of four players battling for the starter’s job. Three months later, McCoy was named Monday one of 20 finalists for the Jerry Rice Award, given to the best freshman in the Football Championship Subdivision.

“It feels great to be acknowledged,” McCoy said. “I just have to thank my teammates and my coaches for all the success.”

He’ll lead the 18th-ranked Vandals at 4 p.m. Pacific on Saturday as they play in their first FCS postseason game in 27 years, taking on Southeast Louisiana (8-3) at Strawberry Stadium in Hammond, La.

Taking the road less traveled for success isn’t anything new for McCoy. He threw for just 830 yards and seven touchdowns as a high school sophomore at Lakewood (Calif.) High School. Things started to click as a junior, when he had 1,569 yards passing with 14 scores and just four turnovers. He played for Lawndale (Calif.) High School as a senior.

Lightly recruited, the University of Idaho was the only school to give the 6-foot-0, 160-pounder a scholarship offer. While McCoy was happy to receive an offer, he viewed it as an opportunity to show other schools what they missed out on.

Despite the chip on his shoulder and being eager to prove his doubters wrong, he saw limited action in 2021, getting snaps in three games. That sample size was similar to how he started his high school career as he went 15-of-32 passing for 205 yards and a score with four interceptions.

Things didn’t really improve as the man who recruited McCoy, Paul Petrino, was fired just days after the season ended.

A couple of months later, Jason Eck was announced as the new coach, and his former quarterback at South Dakota State, J’Bore Gibbs, transferred in, making for a crowded quarterback room with McCoy, CJ Jordan and true freshman Jack Layne.

Sometimes, first impressions can be all it takes to tank an opportunity.

“My first impression of (McCoy) was that he’s really small, and his grades weren’t the best,” Eck said. “Until we got into spring practice, we weren’t too fired up about him, to be completely honest.”

With an open quarterback competition in the spring and the fall, McCoy was able to show he had the fortitude to lead the Vandals.

“He had a very small lead coming out of spring and he just continued to get better over the summer,” Eck said. “When he started taking a majority of the reps, he started to get a lot better. He had a nice touch on his passes and he really had great leadership in the huddle.”

Two weeks before Idaho’s season opener against Washington State, Eck informed McCoy he was going to be the starter.

All he’s done is worked his way into the national conversation in just his first full season.

Despite missing the regular-season finale Saturday against Idaho State, McCoy finished No. 1 in the Big Sky in passing touchdowns with 25 and 2,376 yards.

The poise and maturity the 20-year-old quarterback has shown under pressure is a key trait that earned him the job. That stems from McCoy’s competitive personality.

“I’m a very competitive person,” McCoy said. “I love competition. To come out and be named the starter Week 1 was a blessing. My only goal was to take my team as far as possible.”

McCoy credits the coaching staff not only for his development on the field but his growth as a person. He’s been helped along by former UI quarterback and current receivers coach Matt Linehan.

While in the heat of the quarterback battle, McCoy would go into Linehan’s office, where the former UI standout would talk him through the adversity.

“He’s helped me a lot with becoming a man,” McCoy said. “He helped steer me in the right direction and he’s always been on my side. I love him for that.”