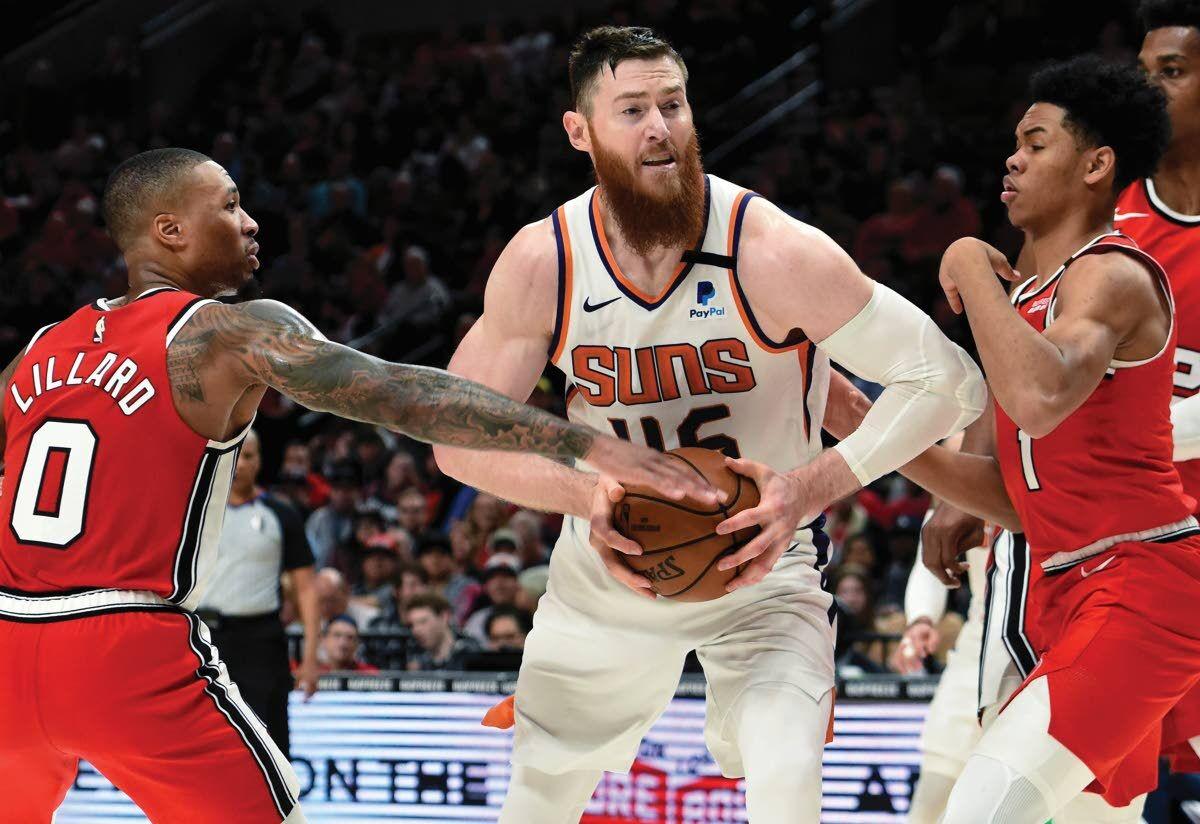 Suns center Aron Baynes, center, drives to the basket between Trail Blazers guards Damian Lillard, left, and Anfernee Simons, right, during the second half of an NBA game March 10 in Portland. 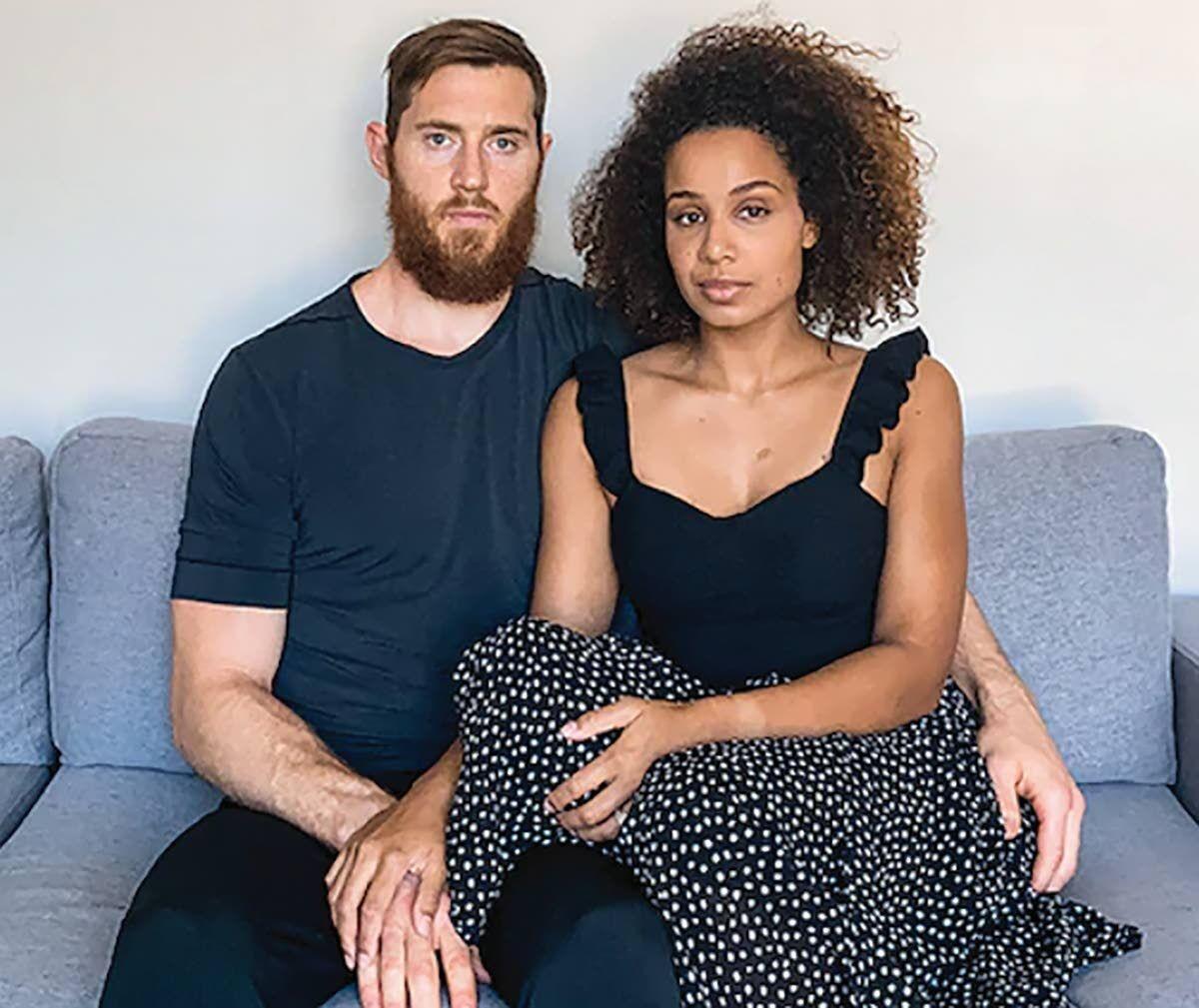 Baynes penned a heartfelt letter on social media regarding race relations. He is pictured with his wife, Rachel Adekponya.

Suns center Aron Baynes, center, drives to the basket between Trail Blazers guards Damian Lillard, left, and Anfernee Simons, right, during the second half of an NBA game March 10 in Portland.

Baynes penned a heartfelt letter on social media regarding race relations. He is pictured with his wife, Rachel Adekponya.

In a post accompanied by a photo of Baynes and his wife, Rachel Adekponya, the former Washington State standout (2005-09) talked of his past ignorance, his path in recognizing cultural barriers and racial biases,and the importance of education. His letter has garnered myriad commendations from his NBA peers and other noteable figures.

“I’m usually a private person,” he wrote. “Most people don’t know that my wife is black, and we have mixed race children. I am grateful for them as they have taught me as much about myself as I have taught them about the world.”

Baynes said it is his responsibility to educate his children on the “injustices and inequalities of the world,” when they are old enough to grasp the idea. At the core of his message is “ignorance.”

“Education starts at home and it can’t begin early enough,” he wrote. “Our children must learn through words and action not to pass judgement on people based on their colour or background.

“Judge a man or woman on their character — integrity is afforded to all cultures but not everyone chooses to take it up.”

Baynes admits he grew up ignorant and uneducated of the institutionalized hardships black communities routinely encounter. He grew up as “part of the problem — part of the white majority in a small Australian town,” he said, most likely referring to Mareeba, Queensland, Australia, where he spent much of his youth before moving east to Cairns to complete his preparatory career.

“Don’t mistake me. I didn’t dislike any certain individual because of their race or culture,” Baynes wrote. “But I didn’t support them either, which was just as bad.

“I was a silent bystander. I did not have the knowledge or the will to stand up for those who were oppressed or marginalized. I did not understand firsthand how a lifetime or generations of being oppressed feels.”

Baynes recognized he does not understand the feeling of oppression, but mourns at the thought of his children being treated unfairly because of their race.

“I now understand some of the fear, the anger, the helplessness and the resilience that is the fight for equality,” he wrote. “As a father I care more about my children and their happiness than life itself. So instead of just bottling it up and working towards my goal in my silent way as I have for most of my life, I want to let it out, breathe life into my beliefs through my words and speak on this issue.”

Baynes recalls his realization at the age of 16 that racism can be overt, or “run as silent as the cool waters of a river quietly swallowing people up.” He shared that he began to grasp just how systemic the issue is throughout society, and “ignorance was not only part of the problem but also an excuse.”

“They say ignorance is bliss,” he wrote. “I say bull—. Ignorance is an excuse and a crutch my friends, and it is what will drag this world under if we’re not careful.

“... As I’ve grown older and I’ve earned great opportunity in life, I’ve worked to educate myself and become a better citizen to all people of the world. As a father and as a man, I now know that I have a voice to be heard when I see injustice and I will not stand for it. Ignorance is not a crutch.”

The 33-year-old Baynes has played for four NBA teams in his eight-year career, including the Suns, Boston Celtics, Detroit Pistons and San Antonio Spurs — with whom he won an NBA title in 2014. In a game with Phoenix in March, Baynes scored a career-high 37 points against Portland, including nine 3-pointers. The 6-foot-10, 260-pounder was averaging career-bests of 11.5 points and 5.6 assists per game in 2019-20.

Under coach Tony Bennett at WSU, Baynes tallied 1,064 career points — ranking 25th on the Cougs’ all-time scoring list — and helped lead Wazzu to back-to-back NCAA tournament appearances in 2007 and ’08, including a Sweet 16 showing as a junior.

In closing, Baynes wrote: “There are many people much smarter, more poetic and more impactful than me who are speaking up. I appreciate the time you’ve given me to listen to my words in hopes that my lessons can be passed onto others to learn at an even younger age to push ignorance to the side and grab education by the horns. The pursuit for equality is a global issue, a fight for our human race, our country, our community, our colleagues, our friends. I will do all I can within my own sphere of influence to make sure love, acceptance and understanding are paramount and that ignorance has no place. My family — my wife and my children — they are my world and I will not let the ignorant drag us under.”