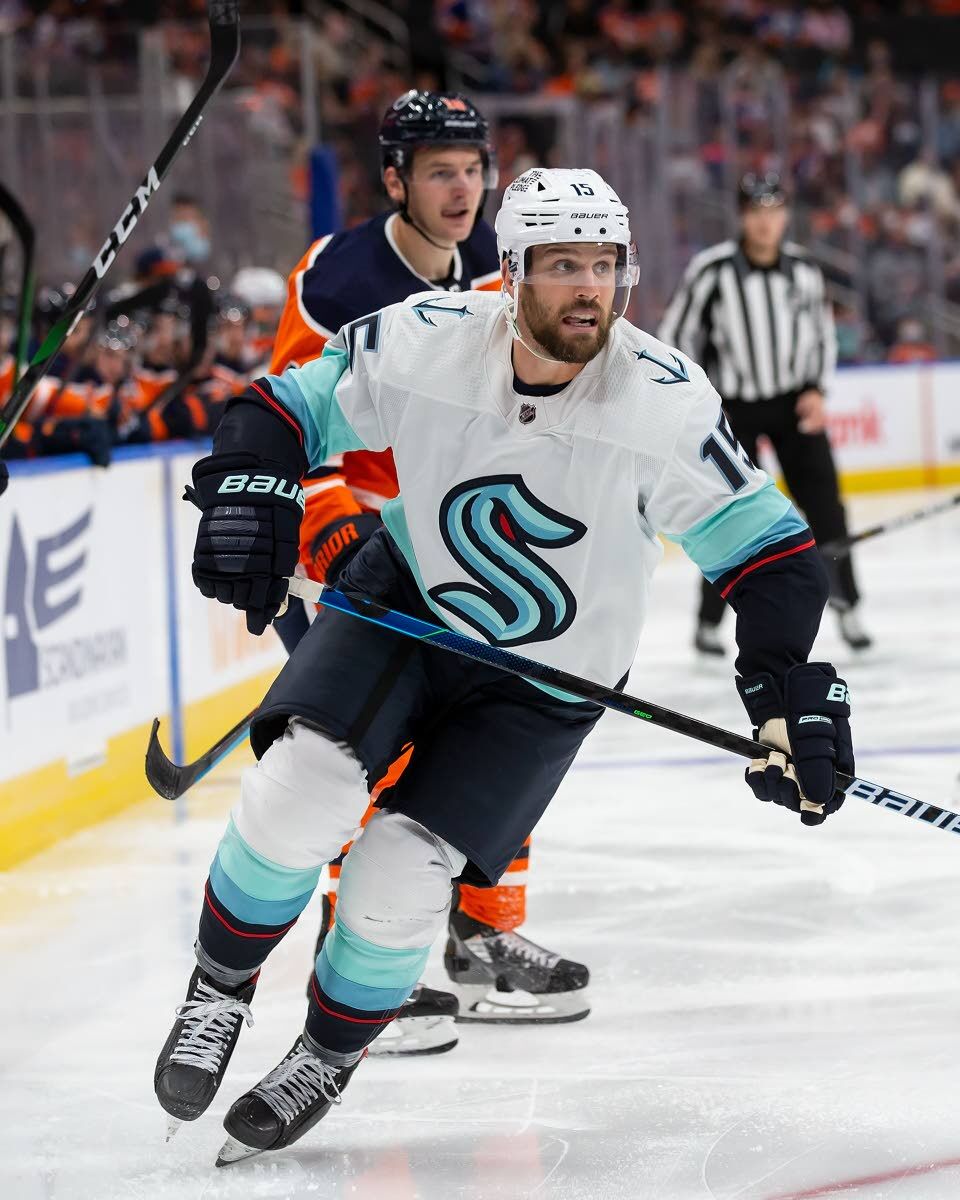 The Seattle Kraken’s Riley Sheahan skates against the Edmonton Oilers at Rogers Place during preseason action Sept. 28 in Edmonton, Canada. 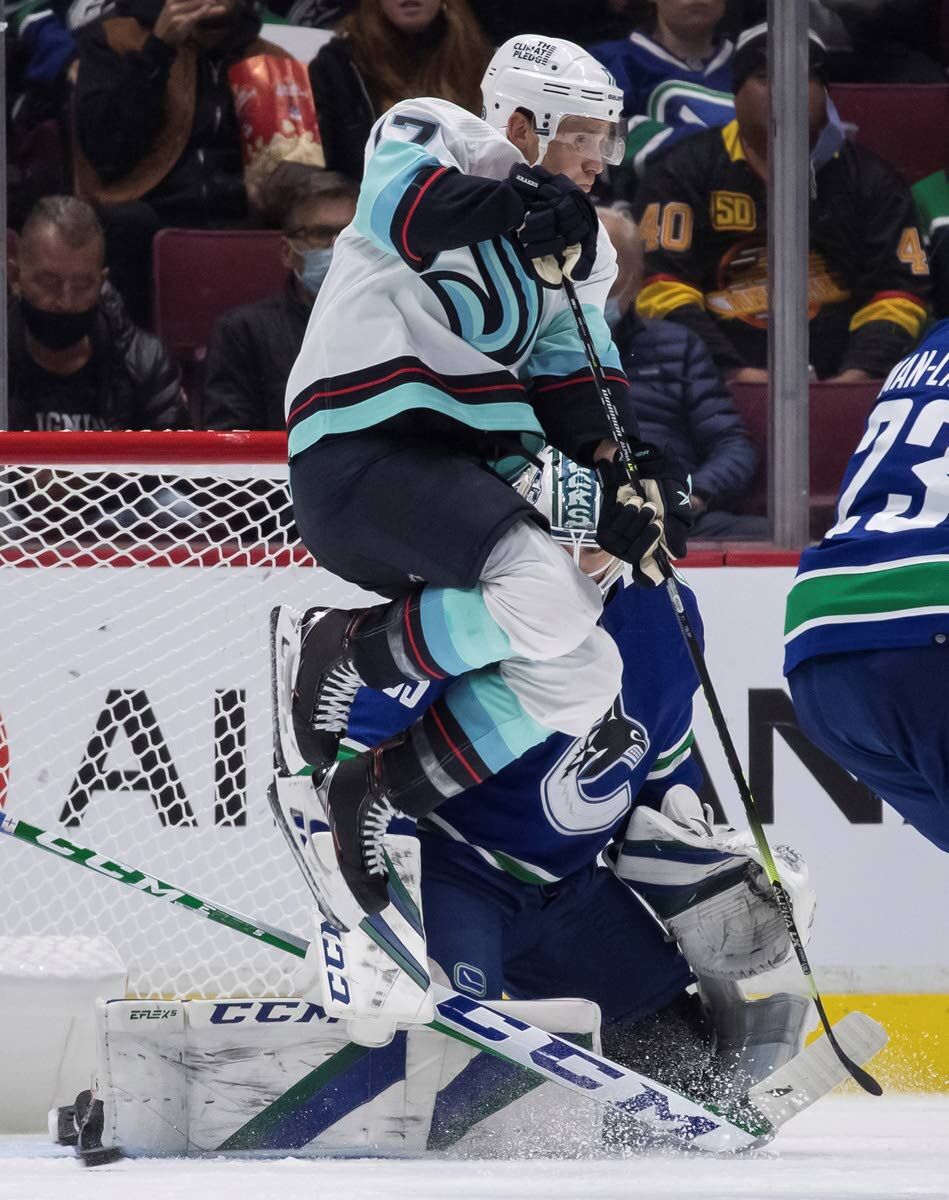 Vancouver Canucks goalie Thatcher Demko, back, makes the save as Seattle Kraken's Jaden Schwartz jumps in front of him during the second period of an NHL preseason hockey game, Tuesday, Oct. 5, 2021 in Vancouver, British Columbia (Darryl Dyck/The Canadian Press via AP)

The Seattle Kraken’s Riley Sheahan skates against the Edmonton Oilers at Rogers Place during preseason action Sept. 28 in Edmonton, Canada.

Vancouver Canucks goalie Thatcher Demko, back, makes the save as Seattle Kraken's Jaden Schwartz jumps in front of him during the second period of an NHL preseason hockey game, Tuesday, Oct. 5, 2021 in Vancouver, British Columbia (Darryl Dyck/The Canadian Press via AP)

SEATTLE — The question will hang around the Seattle Kraken throughout their inaugural season, even if it’s probably unfair.

Can they come close to matching what Vegas did in its first season in 2017-18?

It seems preposterous to think Seattle is going to find the same combination of talent, skill, luck and magic to make the kind of run the Golden Knights did four years ago, getting to the Stanley Cup Final in their first year.

“Yeah, everyone wants to get there. So that’s obviously everyone’s goal at the start of the season,” Seattle defenseman Mark Giordano said. “Obviously, they set a high, high bar.”

Whatever Seattle accomplishes in its first season, there is genuine excitement and buzz about the release of the Kraken. From the tentacle logo with the menacing red eye to the brand new arena, the Kraken should give the NHL a winner off the ice with the foundation that’s been laid heading into Seattle’s first game Tuesday.

It’s exceedingly unlikely Seattle’s first season will end with a trip to the Stanley Cup Final, nor should that be the expectation. What the Golden Knights accomplished in Year 1 might never be matched by an expansion team in any professional sport.

But Seattle has lofty aspirations and the belief that the Kraken can be a playoff contender in their first season.

“If you look at the makeup of our team, I mean, I think we’re going to be a hard-working, blue collar team,” forward Jordan Eberle said. “A lot of guys who are going to play good on both sides of the puck, and then we want to play with some speed and play with some grit.”

When Seattle brought Chris Driedger on stage at the expansion draft, it thought it was showing off its No. 1 goalie.

A week later, Colorado star Philipp Grubauer was signed in free agency and suddenly the Kraken went from having a good goaltender situation to one of the best duos in the league.

Grubauer is the No. 1 but openly acknowledges it’s untenable to play 70 percent of the games like he did last season with the Avalanche. Even with playing that much, Grubauer had a career-best 1.95 goals against average and seven shutouts.

Driedger played 23 games for Florida and had a 2.07 goals against last season.

“You can’t have one guy playing 80 games and be ready for the playoffs,” Grubauer said.

The biggest unknown is where Seattle’s scoring will come from. With Yanni Gourde out early in the season after shoulder surgery, Seattle’s lineup will not feature a forward who scored more than 33 points last season. Alexander Wennberg and Joonas Donskoi each had 17 goals last season but Seattle lacks a player who has proven he can carry the scoring load.

What made Vegas initially so successful was players who had breakout seasons after going underappreciated or underutilized with their previous teams.

Seattle will need a few of those players to emerge if it wants to be competitive, and two candidates could be center Jared McCann and defenseman Vince Dunn.

McCann never has had more than 35 points in a season but he seems likely to land on the top line with Jordan Eberle and Jaden Schwartz, at least until Gourde returns. While Gourde likely slots into the top line when he’s healthy, McCann clearly is a top-six forward and will see a lot of ice time.

Dunn played a career-high 19 minutes per game last season with St. Louis, but the offensive punch he provided during the Blues’ run to the Stanley Cup in 2019 has been fleeting in the regular season.

“I’ve been given a great opportunity by Ron Francis and the coaching staff here to kind of show I can be that guy for them and I’m gonna take full advantage of it,” McCann said.

Welcome to the West

Seattle will get an immediate introduction to the Pacific Division when it visits Vegas on opening night and faces Vancouver in the home opener Oct. 23. Seattle’s first visit to its closest rival, Vancouver, comes Dec. 27.