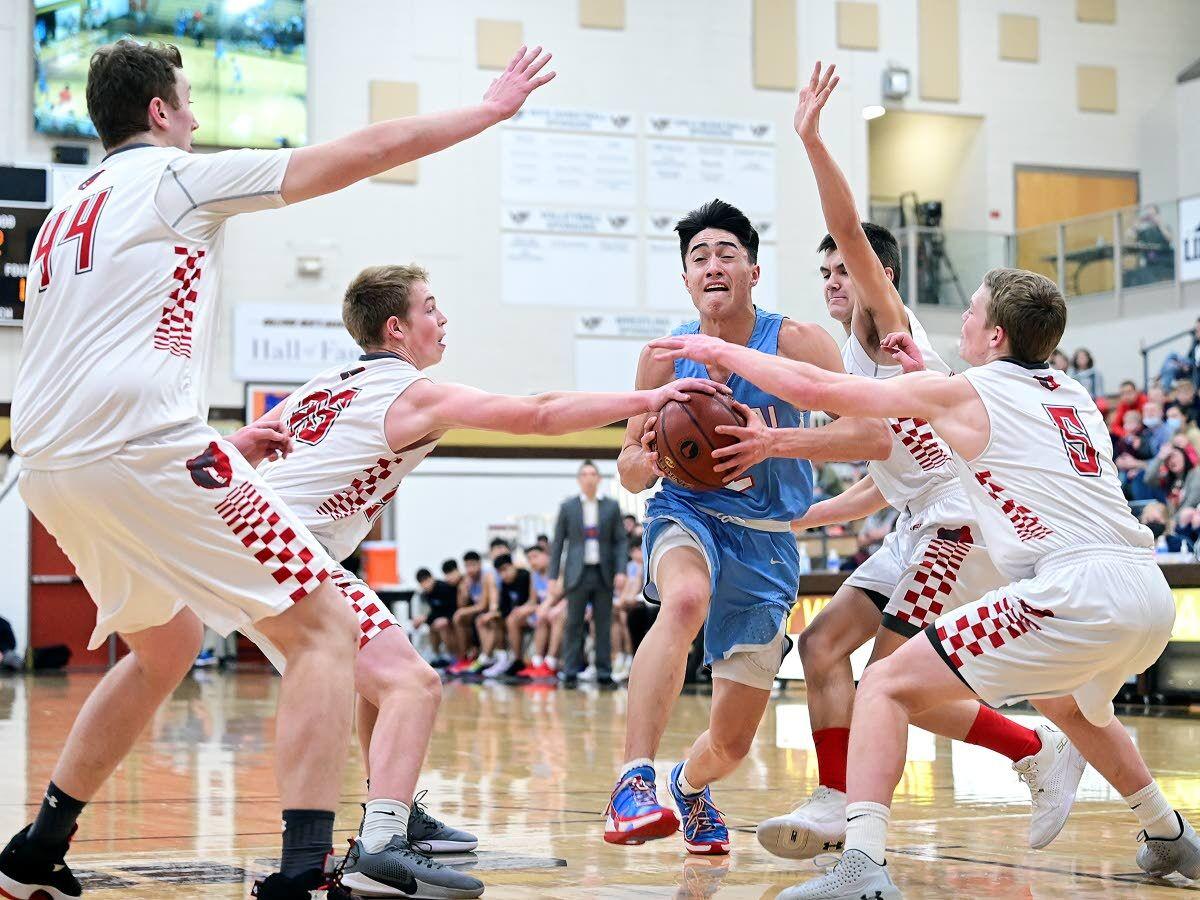 Lapwai guard Titus Yearout (2) drives to the basket as a cadre of Grace defenders attempt to defend him during the first quarter of a Class 1A Division I state tournament semifinal game at Vallivue High School in Caldwell. 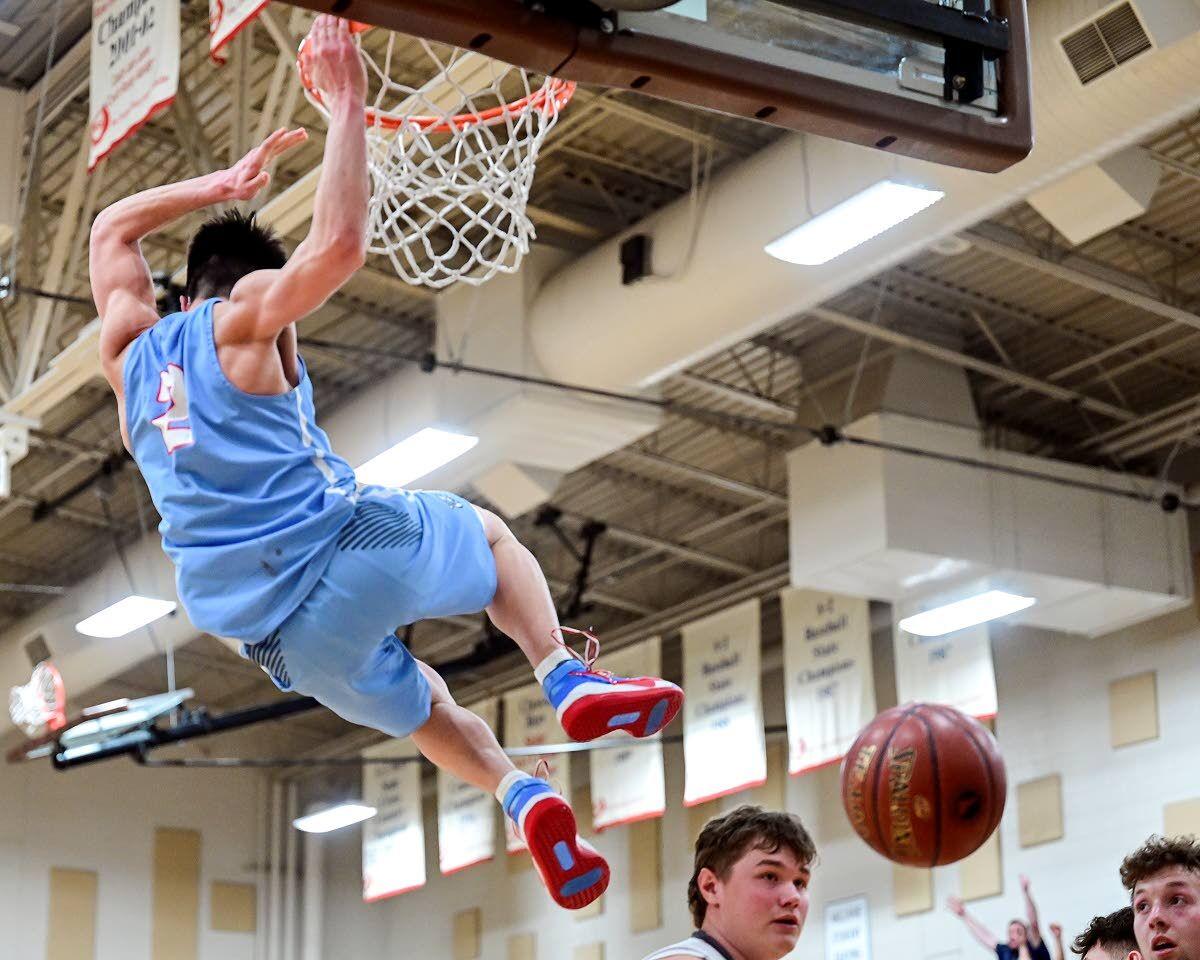 After dunking the ball, Lapwai guard Titus Yearout (2) waits for the Grace defenders to clear out from underneath him during the fourth quarter of a Class 1A Division I state tournament semifinal game on Thursday night at Vallivue High School in Caldwell.

Lapwai guard Titus Yearout (2) drives to the basket as a cadre of Grace defenders attempt to defend him during the first quarter of a Class 1A Division I state tournament semifinal game at Vallivue High School in Caldwell.

After dunking the ball, Lapwai guard Titus Yearout (2) waits for the Grace defenders to clear out from underneath him during the fourth quarter of a Class 1A Division I state tournament semifinal game on Thursday night at Vallivue High School in Caldwell.

Lapwai’s Titus Yearout has been known for making highlight-reel dunks, spectacular passes, jaw-dropping moves off the dribble and lockdown defense.

Now, the Class 1A Division I standout will be plying his wares for a major college basketball team.

Yearout, who was the state’s player of the year in the classification, verbally committed late Monday to the University of Idaho.

“Idaho has always been a dream-type kind of school,” Yearout said. “They’ve always been at the top of my list of schools that I wanted to go to, because ever since I was little, I write schools down of where I wanted to go. And they were definitely at the top of my list. So when I finally got the opportunity, and they offered me a scholarship to play there, it was big time.”

He went back up to Moscow this past weekend to tour the facilities, and met with the coaching staff and players.

“When I got there, I had a feeling in my gut, and I said, ‘I could see myself playing there,’” Yearout said. “All around, not just the basketball team, but everyone around the campus was very nice. They kind of made me feel welcome.”

Lapwai coach Zachary Eastman was unavailable for comment Tuesday. Idaho’s coaching staff can’t comment on the commitment until he signs a national letter of intent, but his stock on the summer circuits clearly was on the rise. The period recruits can sign an NLI for Division I college basketball is from Nov. 10-17.

Yearout announced he had been offered by the Vandals on July 15. It is the only known scholarship offer Yearout received to a D-I school. He now will follow in the footsteps of another product of Lapwai, former Clarkston High School standout Trevon Allen, who now is playing for Pallacanestro Cantu of Lega Basket Serie A in Italy. Allen and Yearout are cousins.

Yearout also had been offered to play at Lewis-Clark State College as a sophomore, then got offers from College of Idaho and Central Washington before he took off to play on the summer circuit this year. Before then, it had been a struggle to get noticed because of restrictions put on college coaches thanks to the pandemic. But the restrictions eased some, and he was able to get some looks.

Yearout, a 6-foot-2 senior-to-be, helped the Wildcats to their 11th state championship this past year. The 175-pounder, who can play each guard position, averaged 24 points, 8.0 rebounds, 5.5 assists, 3.1 steals and 1.2 blocks per game in 2020-21, leading Lapwai to a 20-4 overall record, including a first-place, 13-1 mark in the Whitepine League Division I standings. He was the WPL player of the year for the second consecutive season, and was named by the Idaho Statesman as the state’s player of the year.

Then at the state tournament, he went into overdrive. Yearout tallied 17 points in an 81-35 victory March 3 against Liberty Charter in the first round. He followed that up with a 26-point performance in the semifinal round March 4 against Grace, adding six rebounds, four assists and three steals.

Yearout didn’t need to do as much in the state title game March 5 against Riverstone, but he didn’t have to. He finished with eight points, five rebounds, two assists and a steal as the Wildcats beat Riverstone 82-60 at the Ford Idaho Center in Nampa.

Yearout and the entire Lapwai program got some motivation before the Wildcats’ run to the state title began. All-Star Brooklyn Nets guard Kyrie Irving sent the team a 1-minute, 39-second video as they were en route to Caldwell for the tournament. Irving is friends with Brooklyn Baptiste, who coaches the boys’ and girls’ basketball teams at Lapwai Middle School and is related to varsity assistant John Williamson.

During the summer, Yearout played for the 17U Select Basketball USA team that’s based in Garden City, Idaho, near Boise. In that time, he played in the Cali-Live Summer Showcase from July 8-11 in Irvine, Calif., the NW Live Summer Regional from July 16-18 in Beaverton, Ore., and in the Las Vegas Summer Champion Classic from July 21-25. The team won the Cali-Live event, and Yearout scored 40 points in the championship game.

“That was a big exclamation point, not only for me, but for the Select program too,” Yearout said.

While those calls might have been enticing, he stuck to his guns, and to his heart. Yearout could have went in another direction, but he also knew he wanted to get the decision out of way so he could enjoy his senior year, which includes being the starting quarterback on the football team.

Yearout never wavered on his boyhood dream of playing on the Palouse. Now, it’s all coming to fruition.

“Trevon has definitely set the path for guys like me coming out of Lapwai,” Yearout said. “It’s awesome to be following in those kind of footsteps. It’s just awesome, growing up and having the dream of playing somewhere big. Idaho just happened to be the spot.”