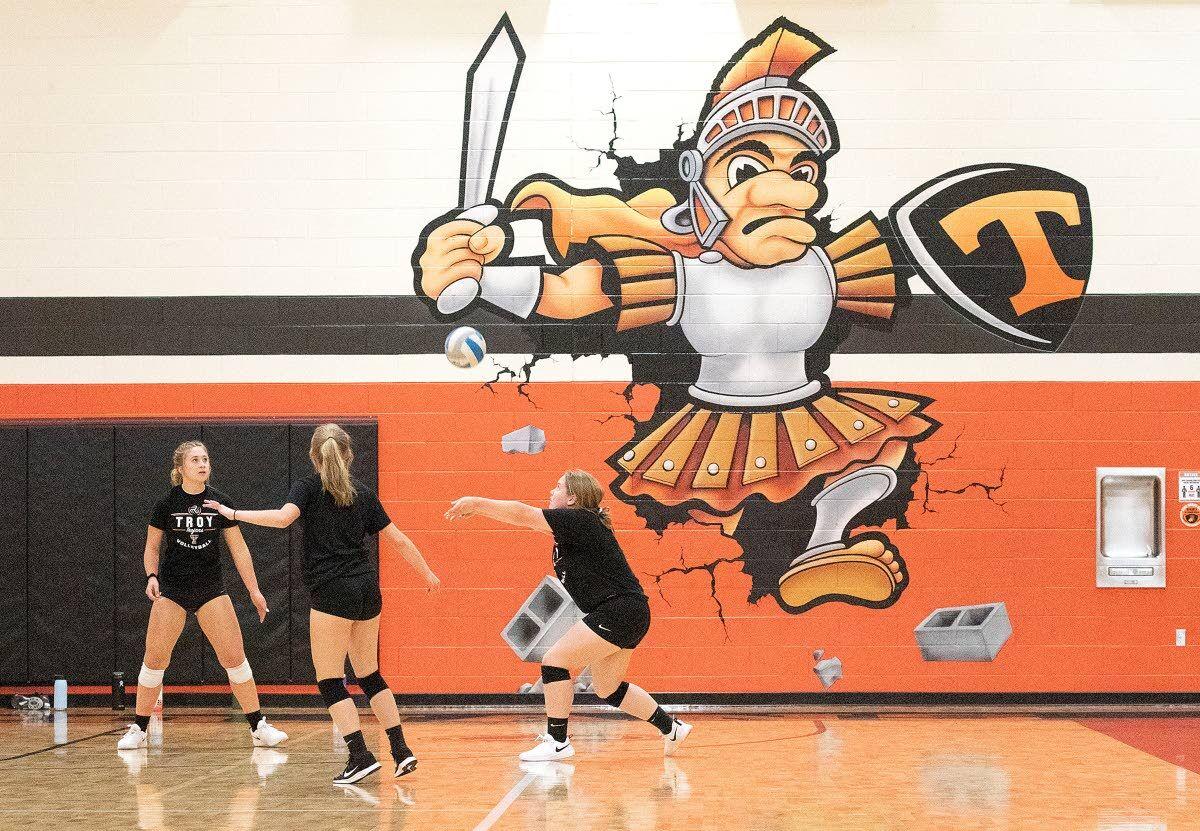 Members of the Troy High School volleyball team run drills during a practice on Wednesday. 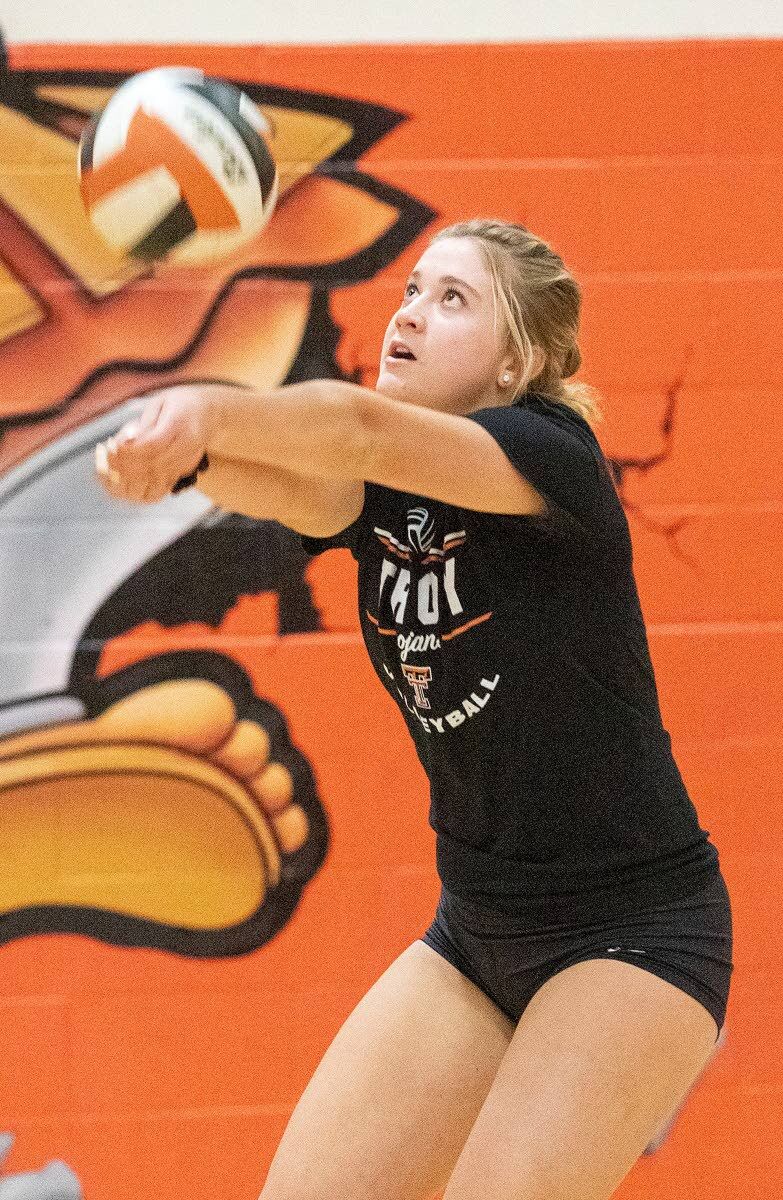 Junior Morgan Blazzard bumps the ball during a practice on Wednesday at Troy High School. 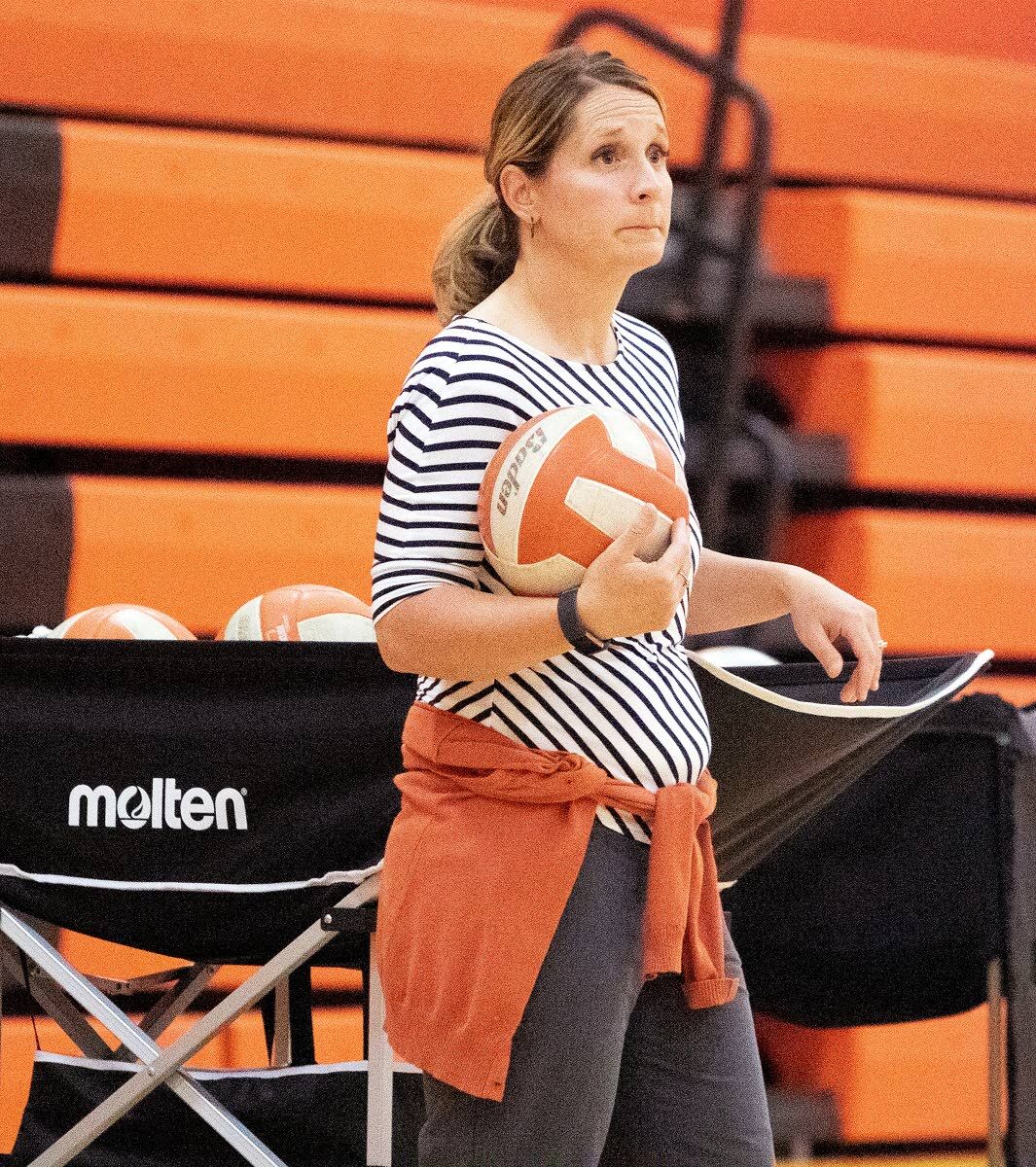 Troy volleyball coach Deb Blazzard watches over a practice on Wednesday in Troy. 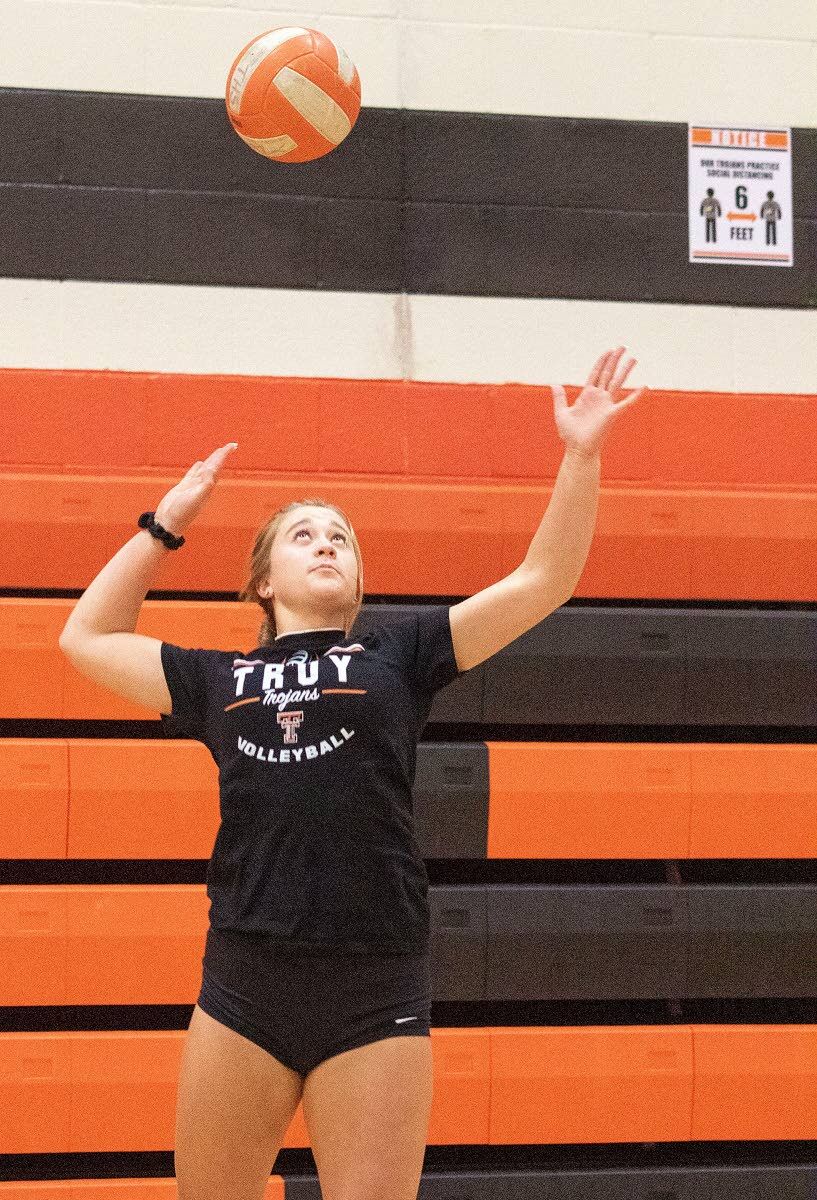 Junior Morgan Blazzard serves the ball during a practice on Wednesday at Troy High School. 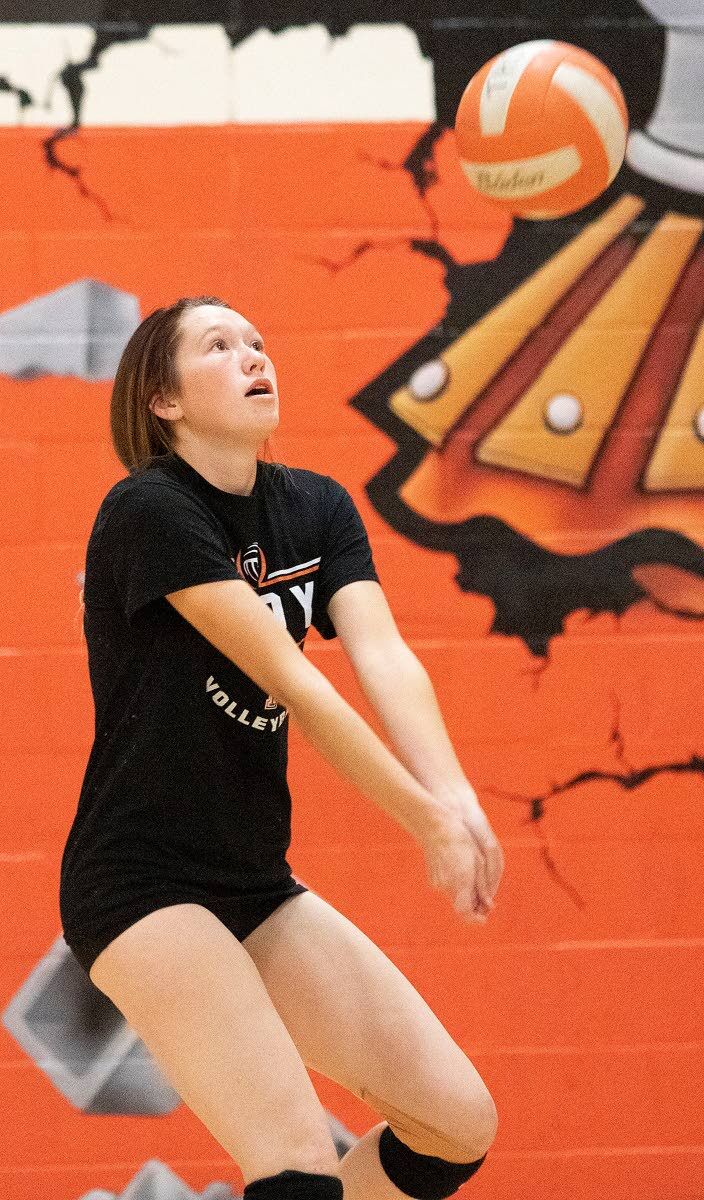 Senior Katelyn Hunter bumps the ball during a practice on Wednesday at Troy High School.

Members of the Troy High School volleyball team run drills during a practice on Wednesday.

Junior Morgan Blazzard bumps the ball during a practice on Wednesday at Troy High School.

Troy volleyball coach Deb Blazzard watches over a practice on Wednesday in Troy.

Junior Morgan Blazzard serves the ball during a practice on Wednesday at Troy High School.

Senior Katelyn Hunter bumps the ball during a practice on Wednesday at Troy High School.

Troy High School’s gym joined a long list of COVID-prompted closures this summer, leaving the Trojans’ historically successful volleyball team without an accessible, traditional court — which usually sees more than its fair share of use during the offseason months.

But take a stroll around town, and you’d have seen a full net set up at a local church, another at the park, then probably a few more in some back yards.

“They really took the initiative,” coach Deborah Blazzard said of her team, winners of back-to-back Class 1A-Division I state titles, and three of the past four.

“Their volleyball IQ is high, and you usually don’t see that this early in the season. These girls continued to play volleyball.”

The sport’s tradition at Troy has been established and maintained for decades, starting most prominently in the early 1990s with celebrated 13-year coach Bobbi Hazeltine, now entering her 22nd season as Walla Walla Community College’s women’s basketball boss. Volleyball enthusiasm continued afterward under the direction of Tera Stoner, and it remains in year No. 6 with Blazzard at the wheel.

The Trojans have laid claim to 12 state championship banners, tied for second most in Idaho regardless of classification (two behind Sandpoint).

“(The coaches) set up this winning attitude,” said star junior outside hitter Morgan Blazzard, a two-time first-team All-State pick and daughter of the coach. “It’s just been hammered into each generation. Starting in kindergarten, through high school, it’s just nonstop volleyball. The coaches are dedicated, and really created a volleyball community.”

All the while, the athletes formed a long string of positive examples for their successors to follow, showing out for the community and providing direction at youth camps.

For instance, Deborah Blazzard pointed out Troy alumna Abbey Blum, now a senior at Northwest Nazarene, as one who paved the way for the current batch of Trojans, many of whom were managers for her Troy teams.

“My sister looks up to me, and that’s a big thing — I remember looking up to the volleyball players, saying I want to be just like them. With the camps coach Blazzard sets up, we can grow our passion and (the kids) have role models,” said senior setter/opposite-side hitter Katelyn Hunter, one of multiple Trojans to take up the sport in elementary school. “The biggest thing is the passion we all have for volleyball. By the time we get to high school, we’ve been playing for four to six years.”

“In second grade (2011), I witnessed Troy win State, so as a manager, just seeing them celebrate and come together, that’s always been a driving factor. I know, for me, they were an inspiration, and I want to be that same inspiration for younger generations,” Morgan Blazzard added.

Success and passion for the sport has bred more of the same. It’s not uncommon for the Trojans to win 90 percent or more of their matches, and they’ve had seasons — a couple recently — where even dropping a single set to a league foe was rare. In the past few years, the only common losses were against larger schools such as East Valley and Puyallup of Washington.

“Having the coaching that we do is great. They’ve been around for years in the community and created a platform of high standards for every girl who comes in,” Hunter said. “They just want to win State, and to have that passion behind us makes us push harder.”

Volleyball at Troy has become a cycle. It’s no wonder the Trojans found means to play through the pandemic, and now are hunting for a three-peat.

Four graduated after last year’s dominant, 27-3 title run, including All-State outside hitter Lindsey Kwate. But Troy still has surged to three wins in three matches so far this season, all in straight sets, being led by Morgan Blazzard’s potent attacks and serves. So far, she averages in the high-teens in kills, and recently had a double-double of 16 and 12 aces.

There isn’t a ton of experience returning — three underclassmen have been logging their first varsity minutes. Troy exhibits a smaller lineup than in years past, and must work through the kinks in the serve-receive game. Deborah Blazzard said the Trojans will need to concoct new ways of scoring after losing a lot of offense, and be “scrappier than ever” defensively.

“We have to have a mindset to pursue every ball, never let it hit the floor and make the most out of every play,” Hunter said. “District champs, state champs are our major goals, and we’ll need (defensive consistency) to get there. We’ve been working very hard at it.”

It’s good news that four returning Trojans have contributed to championships, including Hunter, Morgan Blazzard, junior setter Isabelle Raasch and junior libero Makayla Sapp. The Trojans hardly miss in service, a significantly strong point once again. Just as well is the camaraderie built in the offseason, much of it at those nets around the community.

Deborah Blazzard has been pleased with how dedicated her newcomers are, and noted she’s “never had a team that loved volleyball as much.

“That’s making them stronger,” she said. “These girls are so passionate about volleyball that it’s brought the older ones to a new level, and made them realize why they love the sport.”

Said Morgan Blazzard of her team’s start: “We came in with an open mindset. We weren’t really sure what would happen with COVID, but as we’ve started playing and getting familiar, we’ve gotten competitive. Now, our biggest goal is to push each other to become the best. A three-peat is what we’re hoping for.”

That’d come as no surprise to the Trojan volleyball adherents. They’ve been seeing this cycle for a long time now.

“When you have this type of tradition, and as a young person, get to look up to some great role models and want that for yourself, that has a lot to do with the success,” Deborah Blazzard said.