Moscow’s Morgan Claus keeps the ball in play against Lewiston on Saturday at Lewiston High School. 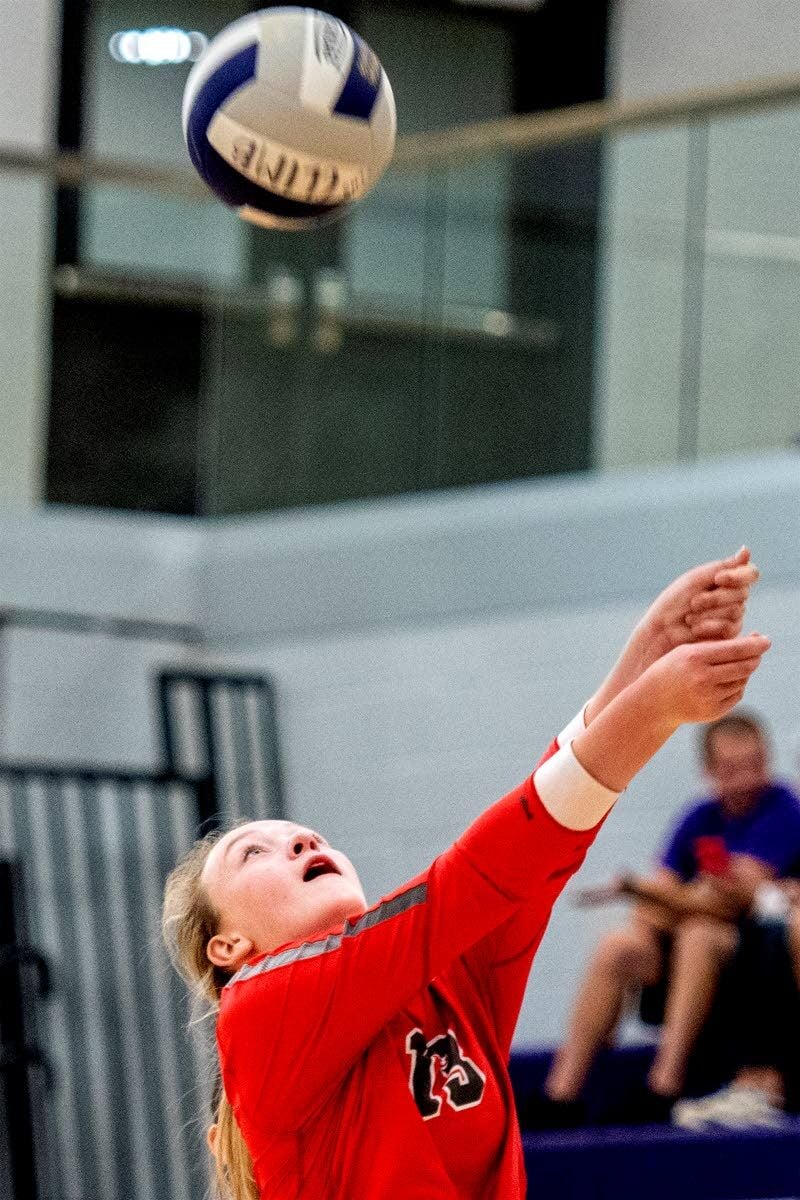 Moscow's Sami Unger keeps the ball in play in Saturday's game against Lewiston. 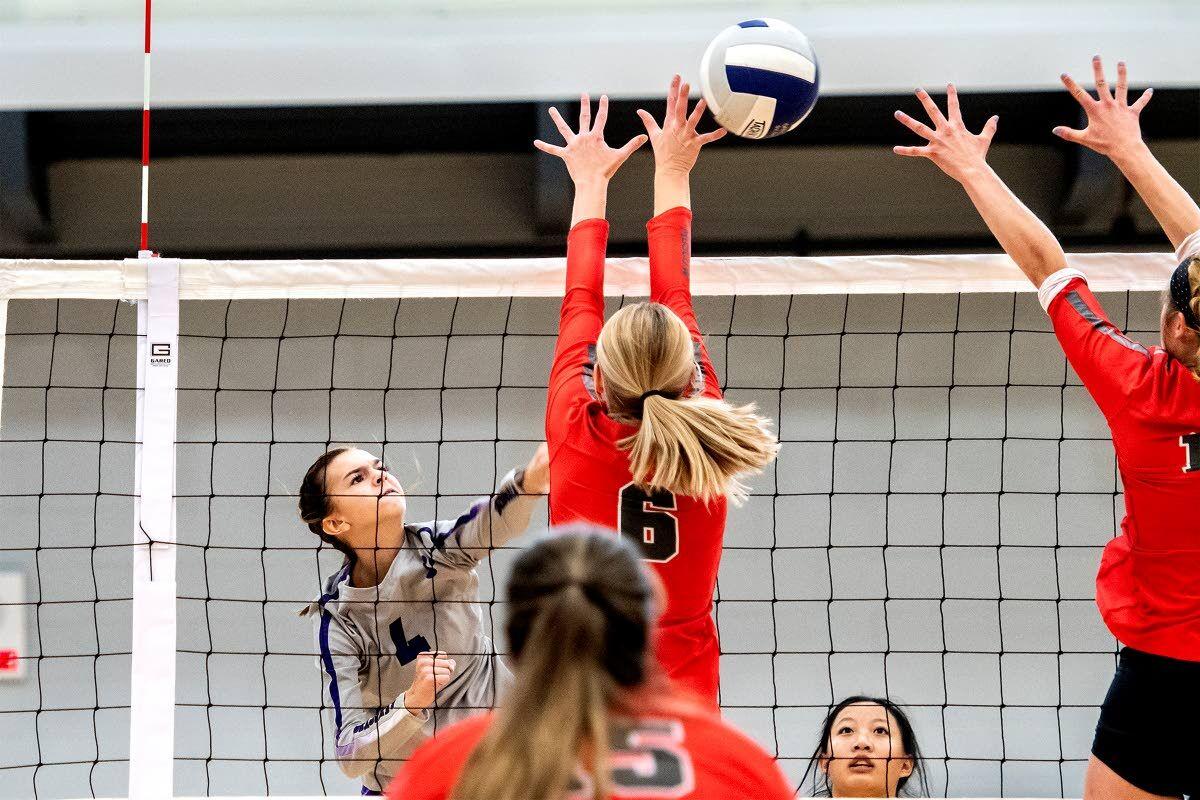 Lewiston’s Brooklyn Hildreth goes for a kill against Moscow’s Morgan Claus (6) and Izzy Burns on Saturday. 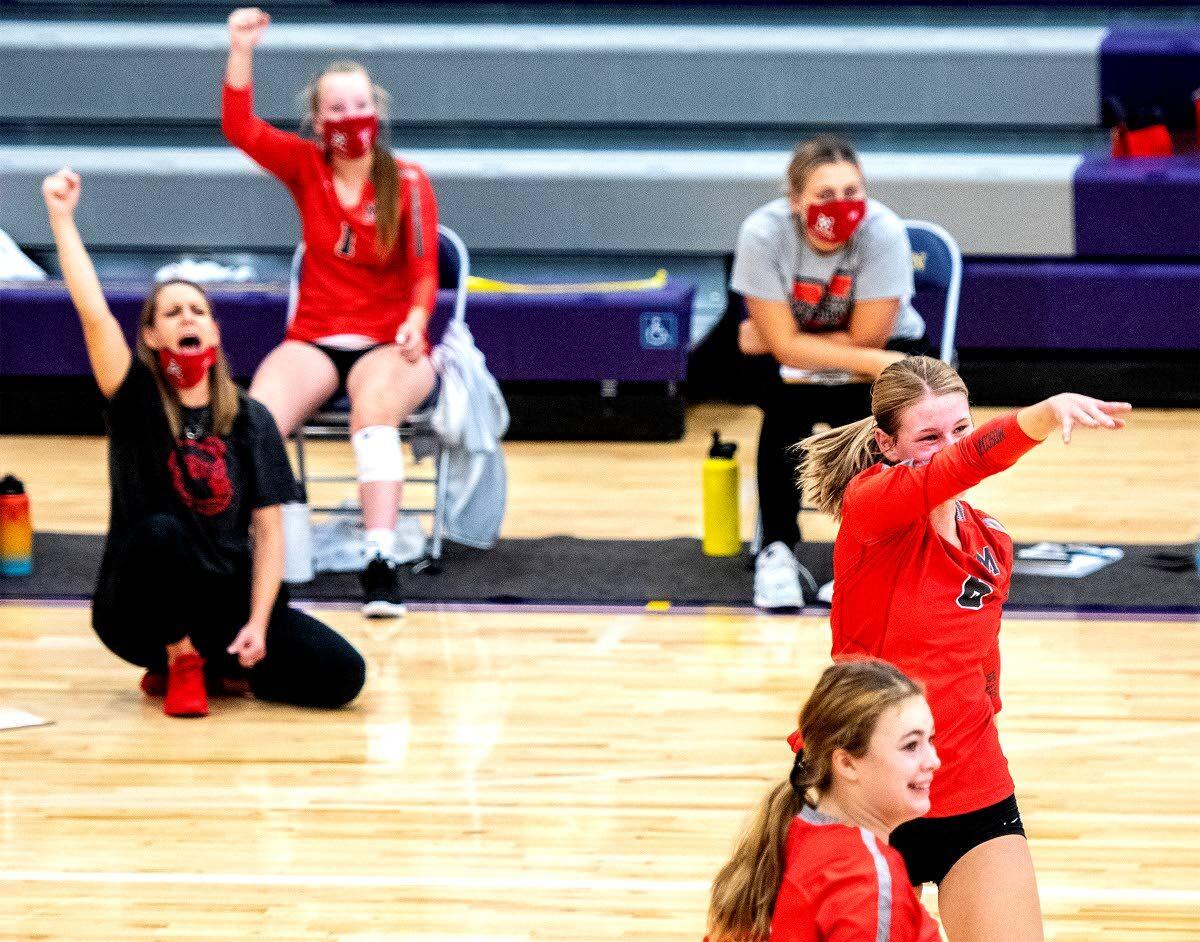 Moscow celebrates a point against Lewiston on Saturday.

Moscow’s Morgan Claus keeps the ball in play against Lewiston on Saturday at Lewiston High School.

Moscow's Sami Unger keeps the ball in play in Saturday's game against Lewiston.

Lewiston’s Brooklyn Hildreth goes for a kill against Moscow’s Morgan Claus (6) and Izzy Burns on Saturday.

Moscow celebrates a point against Lewiston on Saturday.

In this coronavirus pandemic crazy year, the Lewiston volleyball team had the scheduling quirk of sitting idle since Sept. 3. You could excuse the Bengals for being a bit rusty because of inaction.

Junior middle blocker Julia Dickeson is here to say she and her teammates certainly were active in their time away from competition.

Dickeson had another standout performance and fueled Lewiston to a win in a white knuckling second set, sending the Bengals to a 25-19, 30-28, 25-20 sweep of Moscow at the new Lewiston High School in the Orchards.

“We’ve been working a lot on our offense, and really just working on putting the balls away, where in previous games we haven’t,” Dickeson said. “I don’t think we played rusty because (we) obviously have been practicing a lot and getting ready for this (match). Just really focusing. We’ve been playing games in practices.”

Dickeson, who registered a double-double with a match-best 12 kills and added 17 assists, said her team’s serve-receive clearly was in the zone.

“I think our serve-receive was on, which was able to open up our hitters and set the middle a lot,” Dickeson said. “It kind of confused the other side.”

It was the second match of a truncated season for the Bears (0-2), who recently had their interscholastic sports season reinstated by the district board amid COVID-19 concerns.

Moscow players still had been working out through the intramural program the district instituted. Still, coach Toni Claus said her team is young, lost a lot from last year and will need some time to mesh and come together.

“We’re a new little group,” said Claus, who lost five players from the 2019 team to graduation. “I’ve got a new setter and a new libero. It’s a new group trying to find each other.

“We’re not there yet. We’re young, and a lot of these kids have come from JV and this is their first year on varsity. So, it’s going to be a little bit of a learning curve here these first few weeks to see who goes with who and who works well with what. We’ll just keep plugging along.”

It was evident in the second game, when Moscow raced out to a 7-2 advantage behind the serving of senior Izzy Burns, who had two serves tip the net and fall in. Sophomore Makayla Gilkey also was the beneficiary of a tipped-net ace at 10-6.

But Lewiston (4-3) took advantage of several unforced Moscow errors and worked itself back into the game, eventually taking a 19-14 lead. The Bears returned fire, eventually tying it at 22 on a Bengal double hit. Then the race was on.

Dickeson authoritatively finished a kill with the score 28-28, then finished the game with an ace.

Claus admitted Moscow missed out on a golden opportunity early in the game.

Thompson said her team showed grit in coming back from the early five-point deficit.

“There was a lot of rallying, and what I told my girls was just go be aggressive,” Thompson said. “Moscow is a scrappy team and they have some really good hitters, and if we go out there and tip at them, we’re not going to take them out of their offense and that’s not going to score points. So I said, ‘Hey, go out, be aggressive, hit the ball and just stay disciplined on defense.’ I think we did a good job of just competing. We had some competitive fire and that was what allowed us to come back from that hole.”

The third was nip-and-tuck until the Bengals used a four-point spurt to go up 16-12. Back came the Bears, using a 5-1 run to tie it at 17 before the hitting errors came back for Moscow. It was 21-20 when Lewiston senior opposite-side hitter Jennah Carpenter got a tip, then junior Kylee Estlund followed with a kill and sophomore middle blocker Katy Wessels stepped up with one of her 2½ blocks and a kill to end the match.

Thompson said that she was able to help her team exploit some of the Bears’ weaknesses.

“I was giving my players some zones to serve at,” she said. “Just kind of picking out the players who I thought would set us up better on our side. What I had to tell them was Moscow has some really good hitters and to just keep that in mind.”