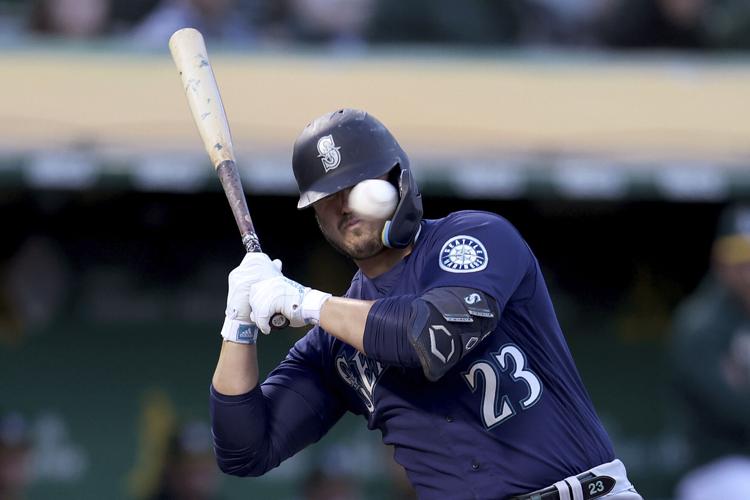 Seattle Mariners’ Ty France avoids an inside pitch from the Oakland Athletics during the first inning of a baseball game in Oakland, Calif., Tuesday, Sept. 20, 2022. (AP Photo/Jed Jacobsohn) 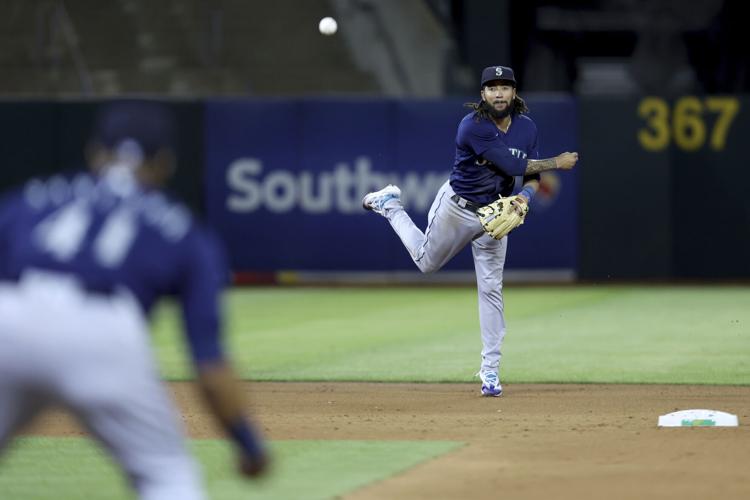 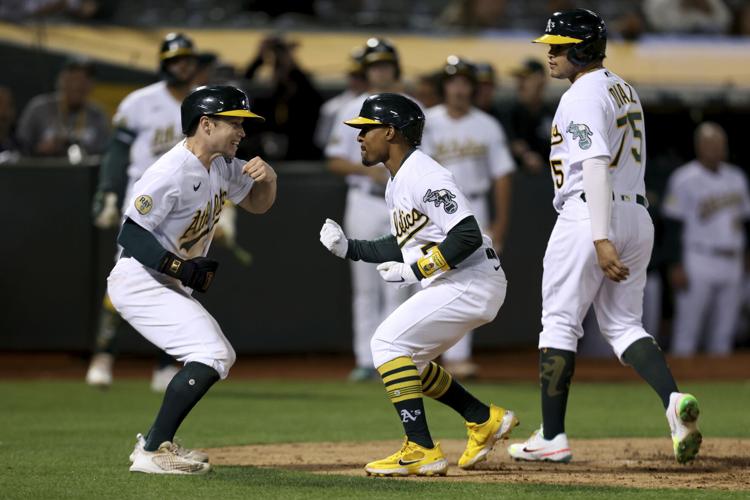 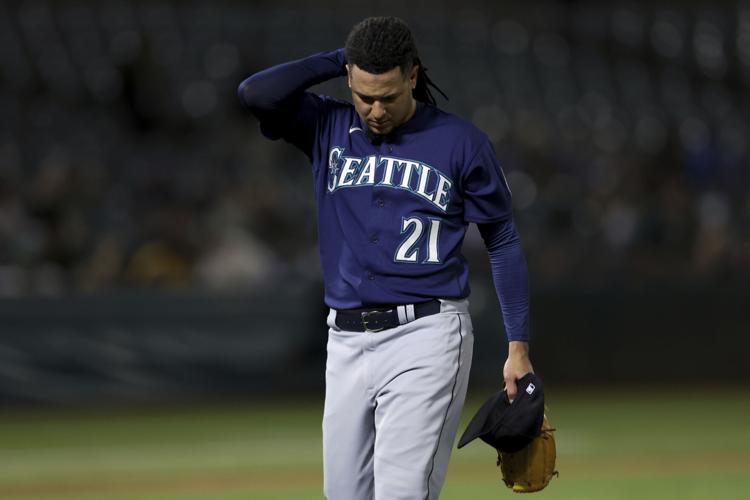 Seattle Mariners' Luis Castillo walks off the mound after being removed during the fifth inning of the team's baseball game against the Oakland Athletics in Oakland, Calif., Tuesday, Sept. 20, 2022. (AP Photo/Jed Jacobsohn) 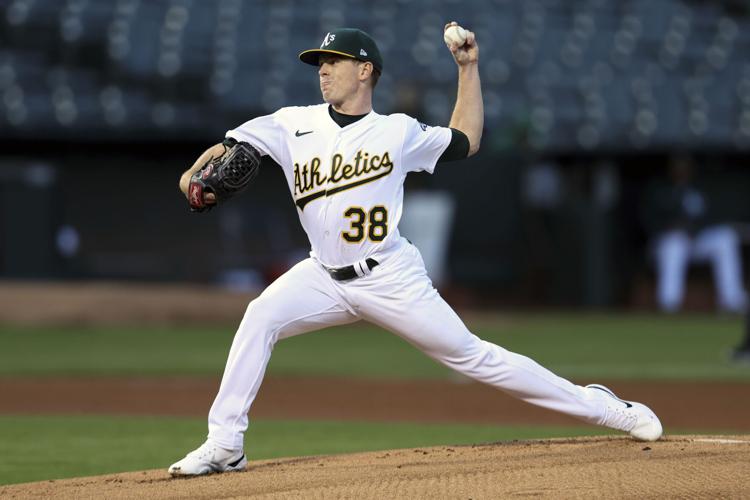 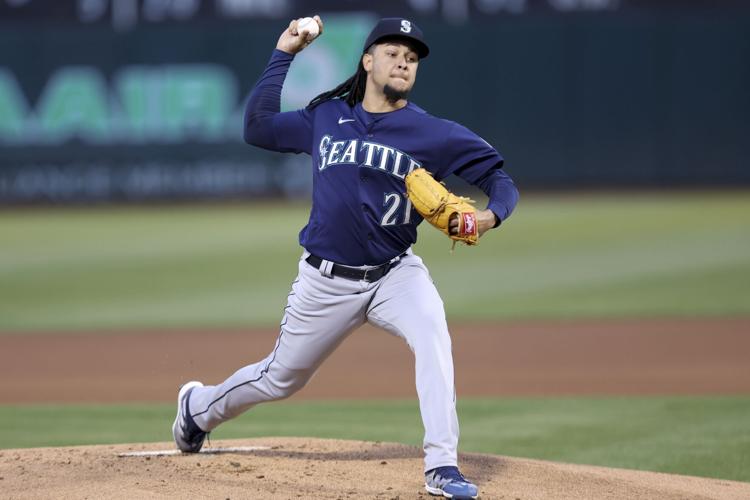 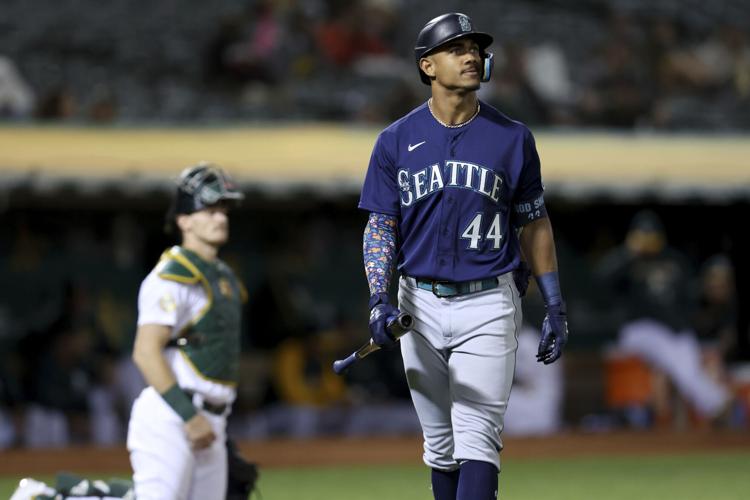 Seattle Mariners' Julio Rodriguez (44) walks back to the dugout after striking out against the Oakland Athletics during the fifth inning of a baseball game in Oakland, Calif., Tuesday, Sept. 20, 2022. (AP Photo/Jed Jacobsohn)

Seattle Mariners’ Ty France avoids an inside pitch from the Oakland Athletics during the first inning of a baseball game in Oakland, Calif., Tuesday, Sept. 20, 2022. (AP Photo/Jed Jacobsohn)

Seattle Mariners' Luis Castillo walks off the mound after being removed during the fifth inning of the team's baseball game against the Oakland Athletics in Oakland, Calif., Tuesday, Sept. 20, 2022. (AP Photo/Jed Jacobsohn)

Seattle Mariners' Julio Rodriguez (44) walks back to the dugout after striking out against the Oakland Athletics during the fifth inning of a baseball game in Oakland, Calif., Tuesday, Sept. 20, 2022. (AP Photo/Jed Jacobsohn)

OAKLAND, Calif. — The Seattle Mariners are hardly hitting the way they’d like to be in late September chasing a long-overdue, elusive playoff berth.

Luis Castillo got knocked out in the fifth inning and the contending Mariners managed just one hit, falling to the Oakland Athletics 4-1 on Tuesday night.

Carlos Santana’s infield single in the second inning was all the Mariners could muster at the plate against JP Sears (6-2) and four relievers.

“We haven’t had a good road trip. We swung the bats pretty well yesterday, I thought we were ready to get out of it,” manager Scott Servais said. “We had their starter on the ropes in the second inning and we let him wiggle off only getting the one run. Credit to him, he hung in there and ends up going five innings. But we certainly need to do more offensively.”

The Mariners have a magic number of 11 to reach the playoffs for the first time since their 116-win season of 2001. But Seattle again struggled to beat the last-place A’s in Oakland, where the Mariners lost two of three at the Coliseum from Aug. 19-21.

“We’re banged up right now, everybody knows it,” Servais said, “but the rest of the league doesn’t care.”

Castillo (7-6) is 3-2 in nine starts since being acquired from Cincinnati at the trade deadline. He matched his shortest outing of the season at 4 2/3 innings.

The All-Star right-hander was tagged for four runs on six hits, struck out four and walked two. Tony Kemp’s three-run homer highlighted a four-run fifth — he connected for his seventh homer, then Vimael Machin and Sean Murphy doubled.

“I didn’t feel frustrated. That’s not my mentality,” Castillo said. “It was a bad day that every athlete has now and then.”

Sam Haggerty drew a bases-loaded walk from Sears in the second for the Mariners’ lone run. Sears allowed one hit in five innings and struck out seven.

Sears rediscovered his fastball command after two disappointing starts and won for the first time in five outings since beating Seattle on Aug. 21 in his only previous appearance against the Mariners.

Domingo Acevedo finished for his third save. The A’s are trying to finish with any momentum they can find — and they get another playoff hopeful in the New York Mets next.

“This team in our division, they’ve had a lot of success over the last two seasons against our club and we’re aware of that, but at the same time we know our challenges with both of these teams being in the playoffs ... but that doesn’t mean that we can’t fight, that doesn’t mean that we’re not going to go out and compete every night and try to win baseball games,” A’s manager Mark Kotsay said. “You saw that tonight. The bullpen came in in the sixth and did a great job.”

Ty France went 0-for-3 with a walk and two strikeouts as designated hitter for Seattle after taking a pitch in the foot during Monday’s 9-1 win over the Angels in Anaheim.

Mariners: 3B Eugenio Suárez, placed on the injured list Saturday with a fractured right index finger, saw a hand specialist Monday in Arizona and the hope is he will begin taking swings this week off a tee and in the cage. “The first thing is to get a bat in his hand and see what that feels like,” Servais said. “The Blue Jays are probably not happy about it, to be honest.” ... C Cal Raleigh was out of the lineup for the fourth time in five games because of a sore left thumb. Servais said he is “improving, the swelling has gone down a little bit.” He’s day to day.

Athletics: CF Ramón Laureano is still being evaluated after he went on the 10-day injured list Saturday with a right hamstring strain and it’s unclear whether he will play again this season. He already missed time from Aug. 15-Sept. 5 with a strained left oblique muscle.