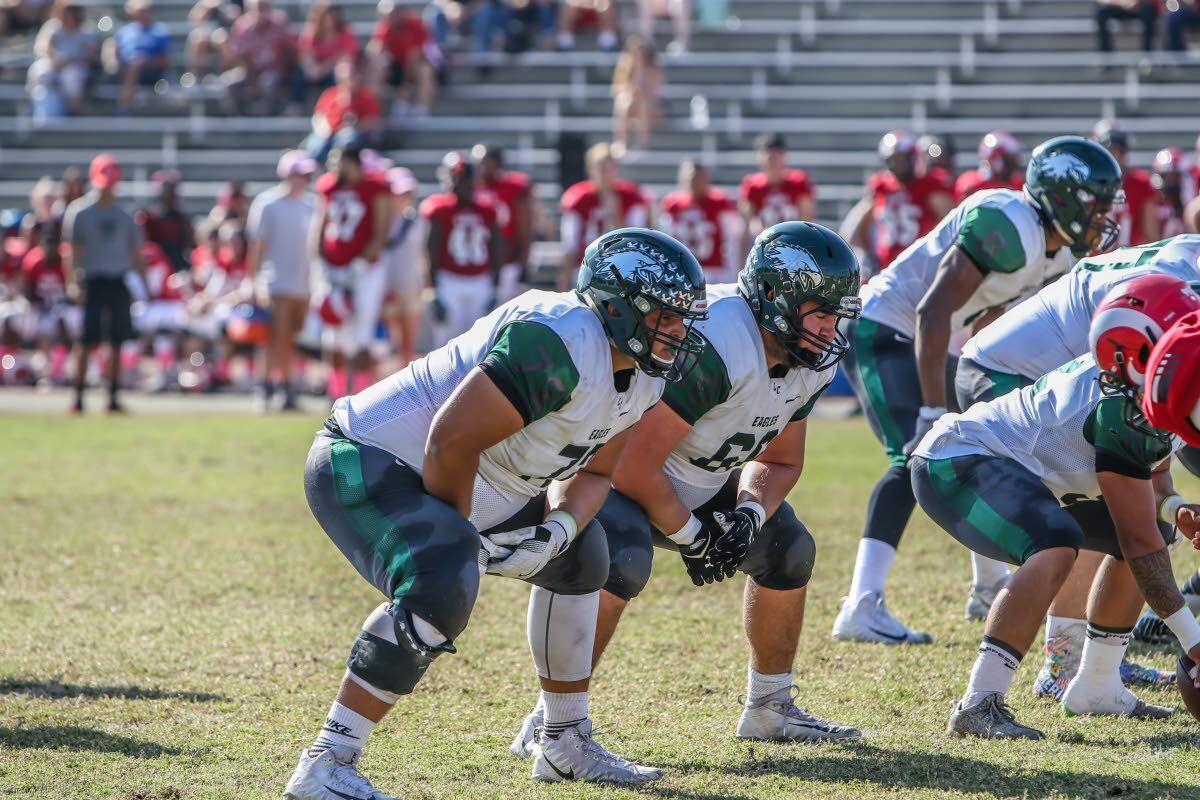 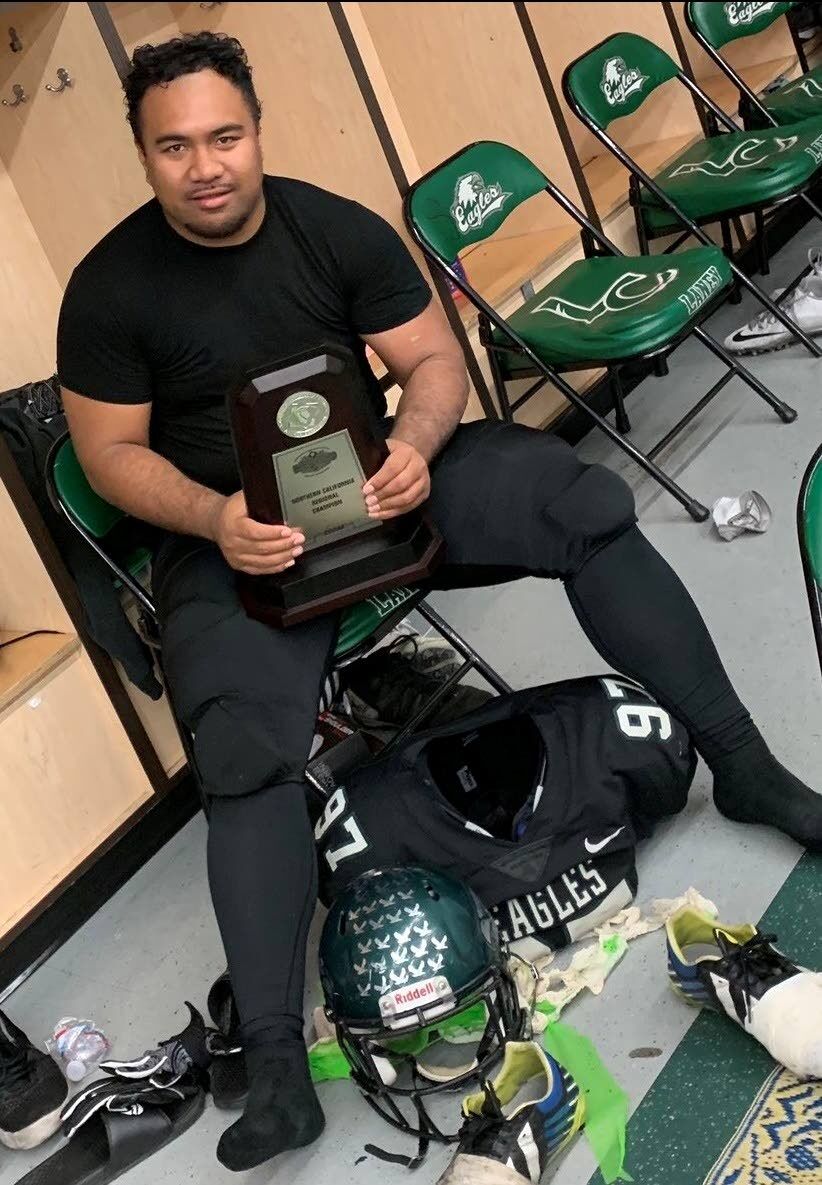 The Idaho Vandals’ trio of Laney College products weren’t at all taken by surprise in late July, when they binged through the latest season of “Last Chance U” — a Netflix docuseries following the lives of players at football powerhouse junior colleges.

In fact, they were spot-on in their predictions of the show’s focal points when asked of their expectations a couple of days before the premiere.

Although they weren’t around for this year’s installment, Part 5 of “Last Chance U” represents a collection of shared experiences, hitting close to home for the three Vandal seniors, all of whom hail from the Oakland, Calif., area.

UI offensive linemen Brian Robinson and Bruce Burns, and defensive tackle Vei Tomasi, suited up for Laney before the show arrived in 2019. They’d already made it out of the juco in the heart of Oakland, and to the greener pastures, Division I perks and slower-paced lifestyle of Moscow.

Yet before then, they’d helped to provide the impetus that’d one day result in a nationally renowned television series sniffing out the stories of Laney.

“It’s different than past seasons,” said Robinson, a former right tackle at Laney. Earlier chapters of “Last Chance U” centered around rural programs, located in communities with populations in the low-thousands. “You’re going to a big city. You got guys waking up, driving to class, practicing, then straight to work after that. They all do that nonstop.

“I know at one point while I was there, we had 10 teammates living in a three-bedroom apartment. There’s no dorms, no scholarships, no meal plans. You grind every day to accomplish a goal.”

Robinson and Burns were recruited by the Vandals as a package, and arrived at UI ahead of the 2018 season after anchoring the right side of Laney’s O-line for two years.

“We were like 4-6 the year before,” recalled Burns, a first-team All-America California Community College Athletic Association guard in 2017 out of Arroyo High School. “Our team changed the culture around.”

In its first game of 2016, Laney toppled City College of San Francisco, its hated Bay rival and the defending CCCAA champs. It signified a turn of the tide. The underdog Eagles began to trend on social media, then proceeded to a 9-2 campaign.

“We were the new kids on the block. No one expected us to win,” Robinson said. “I think that win projected us to new levels of what we want to do. We were thinking, ‘We just beat the best, so who’s gonna beat us?’ ”

The Eagles, under legendary Oakland-area coach John Beam, assembled another 9-2 record, sprinting to eight consecutive wins to end their regular season before falling in a playoff “dog-fight” to American River College, 41-35.

“I thought we had it in 2017, we just ran into some stiff competition,” said Robinson, an All-Bay Valley Conference honoree at Laney and a Moreau Catholic (Hayward) product. “They brought in a lot of under-recruited guys, absolute beasts, and they put the pieces together.”

Things were trending toward a “Last Chance U” nod, and the ultimate nudge came in Tomasi’s final season. Laney went 11-2, chalking up three postseason wins and nipping Ventura College 40-35 for the CCCAA state title. The Eagles were named mythical national champions by the media and their peers.

Eight months later, the popular series announced it would head to the Bay Area to follow Laney, its California juco grinders and its unconventional but affable coach.

“I really think it was just how close we were as a team. I feel like that definitely helped pave the road for them,” Burns said.

Added Tomasi: “I remember a lot of guys talking about the 2017 team, and how they impacted us to be better. That was a huge help, plus you had some freshmen who were really good. ... And our team bonding was something we focused on a lot. We’d do activities outside football to just understand each others’ struggles.”

Difficult circumstances are the norm when it comes to “Last Chance U” and, in general, junior colleges — which generally compel their players to mature much more quickly than others.

Burns “wasn’t planning on going to college at all,” but met with two Laney coaches his senior year and was convinced.

“This is an opportunity, and I should take it,” he remembered. “It was either that, or start working, so I chose football.”

To support himself in junior college, Burns took up a warehouse job at a Sears outlet, moving furniture and appliances, then returning at night to his family home in the southern outskirts of Oakland to rest.

“You go to school, practice, the gym and then work, with game day either Friday or Saturday, then back to work on Sunday, and repeat,” he said.

Tomasi took the long route back to football. A 2012 graduate of Fremont High School, he attended the College of San Mateo, a Laney rival, for a semester, but the 50-minute drive made things tricky.

He pursued rugby for about two years, and even competed for USA Rugby U20, then went on a year-long religious mission before electing to finish his degree, and perhaps earn a football scholarship in the process. Beam had recruited Tomasi in high school, and several of his family members were Laney grads.

“I understood the process, that junior college is a stepping stone, not the final destination,” Tomasi said.

During his Laney days, Tomasi was a bar bouncer and a position coach for the Oakland Warthogs, a local rugby team. He lived down the street from the school. When his mother was at work, Tomasi took care of his father, who had suffered a stroke 18 years ago.

“I would look to my brothers on the team and know I’m not the only one struggling,” he said. “... Football had pulled all of us together, and I think that’s what I enjoyed about Laney the most.”

Robinson fell under the radar in high school, but delivered enough of a blip as a junior to catch the eyes of Beam and Co.

“They saw I wasn’t getting much (recruiting attention),” he said. “I’d known coach Beam through family friends and heard nothing but good things. Plus my brother went there. That made it a pretty easy decision.”

Robinson could sometimes simply catch a ride to campus from southern Oakland with his brother; the two lived together with their parents. Adam Robinson, a former Laney quarterback from 2011-12, has been the Eagles’ receivers coach since 2016. He was featured prominently in “Last Chance U” as a stabilizing presence at the helm of a talent-packed but at times hot-tempered position group.

Not everyone is so fortunate in terms of living arrangements in Oakland, where gentrification and an influx of tech careers has made housing impossible for many to afford.

Take for instance Season 5 star Dior Walker-Scott, who’s now a walk-on at Hawaii one year removed from living day-to-day meal-wise, and sleeping in his car. Walker-Scott had interest from Idaho as a receiver before injuries forced him to move to quarterback for much of the season.

“A lot gets thrown at you in a short amount of time. ... It teaches you life lessons, to never give up and pursue what you want, no matter what,” Robinson said.

“It’s a different type of struggle,” said Tomasi, referring to troubles like the long commutes, money, time constraints and distractions. “With the other (“Last Chance U”) colleges, it was a lot easier to focus, because you’re away from home.”

The show illuminates the notion with offensive lineman Nu’u Taugavau, a lifelong friend of Tomasi’s. Taugavau’s time at Laney is covered extensively as he grinds through classes and football, seeking to provide something better for his family while sharing a home with his parents, wife and his two young children. He’s now on scholarship at Murray State.

“It’s incredible to see the struggle people go through, and then for them to end up making it out,” Tomasi said. “In the beginning of the fall or spring, you’ll see maybe 100 guys there, and over time you’ll see guys leave, not being able to handle it. You can tell the guys who stayed and grinded, they learned life lessons there, just knowing it’s gonna be hard, but you can get through it.”

As Beam put it during one episode, pointing to a sign near the Eagle field: “That says ‘Laney Built,’ man. No silver spoons.”

This season is uniquely Oakland, and in many cases seems to be a celebration of “The Town,” known as the scrappy, down-to-Earth counterpart to the extravagant San Francisco.

“San Francisco is the postcard. Oakland is the reality,” offensive coordinator Jeff Haagenson said. The vast majority of Laney’s roster every year is comprised of “East Bay” talent.

And in charge is one of the Oakland sports scene’s most endearing figures in Beam, the “Godfather of Oakland Football.”

To be sure, the former ultra-prosperous coach at Oakland’s Skyline High School is demanding of his players, many of whom need a bit of tough love. But off the field, he presents more of a humble and humanitarian quality than coaches in “Last Chance U” seasons past.

Beam is considerate when dealing with obstacles his players encounter away from school. Many players call him a father figure. Tomasi noted Beam pushes for athletes to sort out their passions besides football, and often uses his connections to advocate for players to be hired in post-football occupations, or be recruited to continue playing.

Beam has coached 20 NFL players and more than 100 who eventually went D-I.

“So much can be said about him. He helped me achieve my dreams, so I’m forever grateful,” Robinson said. “Off the field, he’s one of the nicest individuals you’ll ever meet. As soon as you step on the turf, it’s game on. He’s been around the game so long he’s almost mastered it.”

The final football-focused season of “Last Chance U” is a fresh, metropolitan look at the toil of JC. But it also epitomizes “juco grind,” a term used nationwide that, almost as a rule, is associated with pride for the shared experiences of junior college products.

“It’s something big for us — you know someone understands the struggle we all had one way or another, mainly with the lack of resources,” Tomasi said. “Especially a California juco product, it’s something we all know, that it was a different type of struggle, and that we made it.”