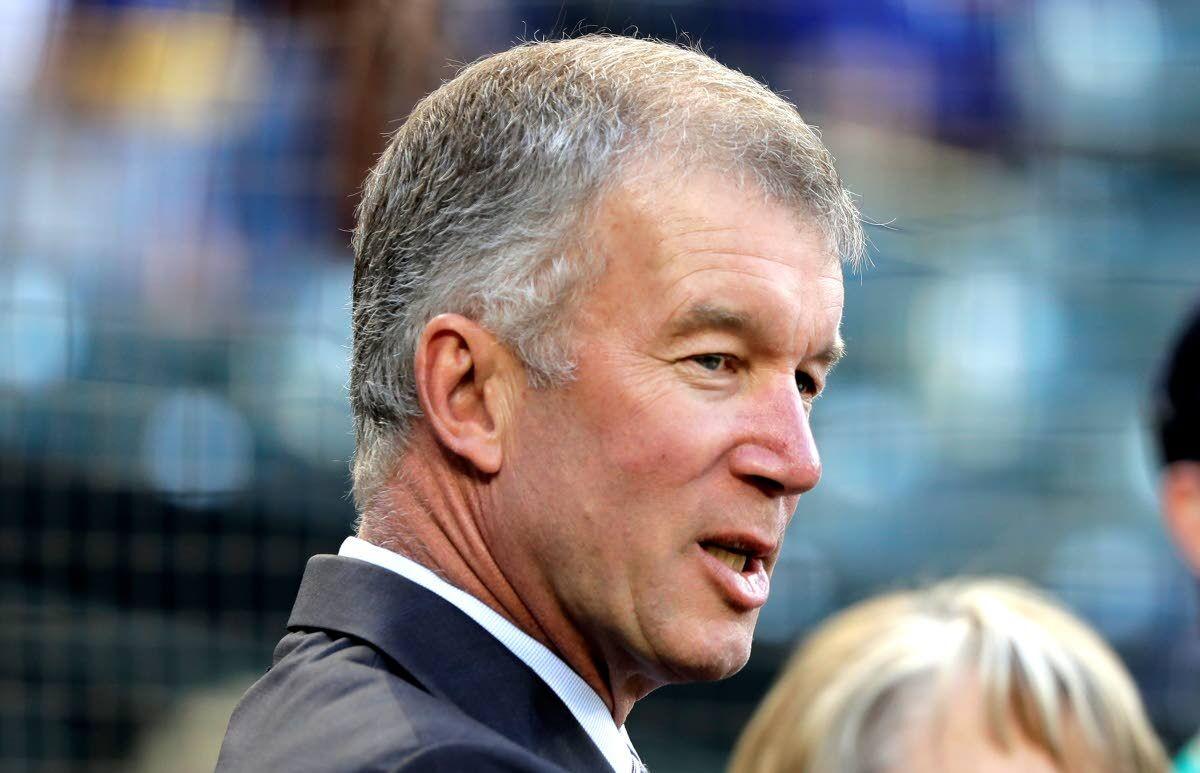 FILE - In this Aug. 3, 2018, file photo, Seattle Mariners president Kevin Mather stands on the field before the team's baseball game against the Toronto Blue Jays in Seattle. Mather apologized late Sunday night, Feb. 21, 2021, for comments made during a recent online event where he expressed opinions about organizational strategy, personnel moves and club finances. Mather’s comments came in a speech to the Bellevue, Wash., Breakfast Rotary Club on Feb. 5 and were posted online over the weekend. (AP Photo/Ted S. Warren, File) 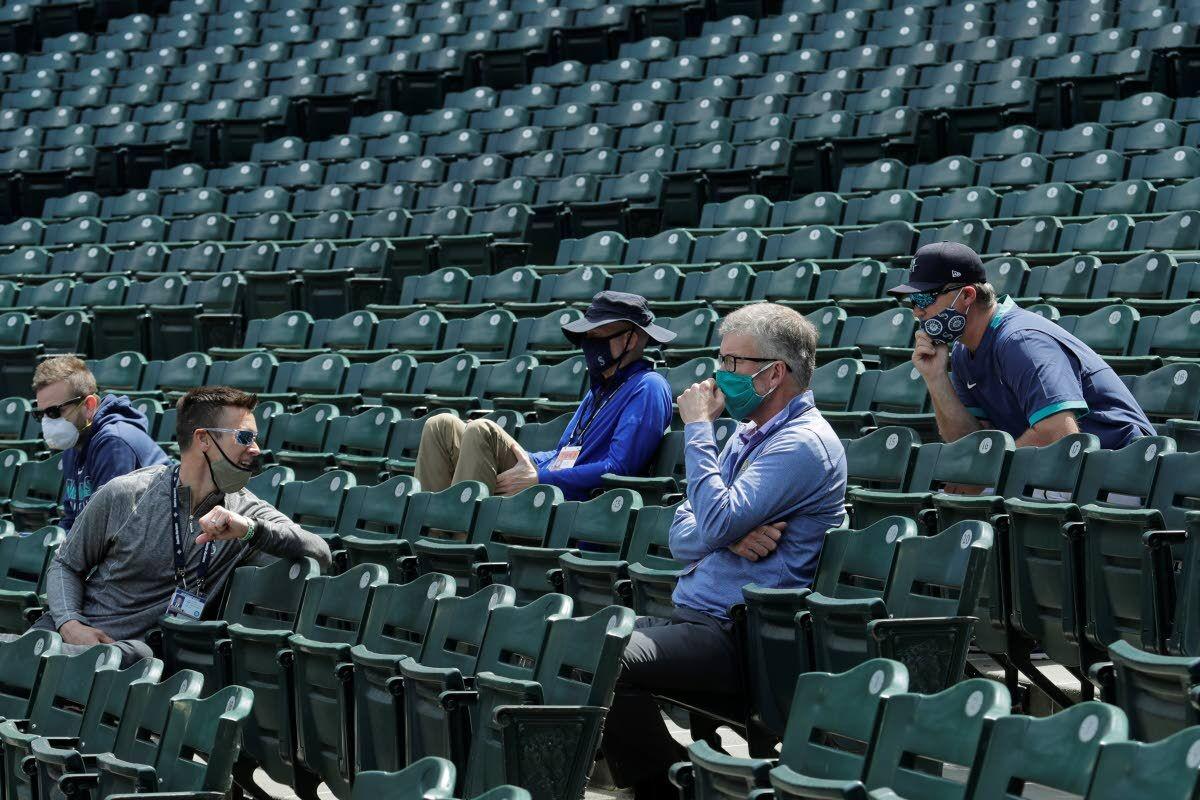 FILE - In this Aug. 3, 2018, file photo, Seattle Mariners president Kevin Mather stands on the field before the team's baseball game against the Toronto Blue Jays in Seattle. Mather apologized late Sunday night, Feb. 21, 2021, for comments made during a recent online event where he expressed opinions about organizational strategy, personnel moves and club finances. Mather’s comments came in a speech to the Bellevue, Wash., Breakfast Rotary Club on Feb. 5 and were posted online over the weekend. (AP Photo/Ted S. Warren, File)

In one 45-minute conversation, Kevin Mather undermined the Seattle Mariners far beyond being the organization with the longest playoff drought in baseball.

He took insensitive shots at a former All-Star from Japan and a top prospect from the Dominican Republic for their English skills. He admitted to the team possibly manipulating service time for some of its top prospects.

All this from a top executive who once was accused of harassing a female employee and kept his job despite a settlement.

The latest transgression by Mather ended up costing him his position as president and CEO of the Mariners. Mather resigned Monday after video surfaced over the weekend of him expressing his views of the club’s organizational strategy and making insensitive remarks about players during a recent online event.

Mariners Chairman John Stanton announced the decision and said Mather resigned before a decision had to be made whether he’d be fired.

But the choice seemed predetermined as the firestorm over Mather’s comments raged since they were first posted to Twitter on Sunday — which is how Stanton first learned of their existence. There’s been no determination whether Mather will receive a severance or what will happen to his small ownership stake in the franchise.

“There were a number of comments made by Kevin that ... didn’t reflect the Mariners, don’t reflect what I believe, what our ownership believes, and were inappropriate,” Stanton said. “Those comments included some of the things that have been referenced with respect to our players, and in particular the importance of diversity and inclusion in our organization.”

Mather, with the team since 1996 and promoted to CEO and team president in 2017, apologized late Sunday after his comments from Feb. 5 made to the Bellevue, Wash., Breakfast Rotary Club were posted online. They were revealing and unfiltered. They were also a stain to a franchise that hasn’t seen the postseason since 2001, has seen fan interest dwindle significantly during a two-decade swoon, and are in the midst of a rebuild.

Mather’s most inflammatory comments were references to top prospect Julio Rodriguez and former star pitcher Hisashi Iwakuma and their grasp of English. Mather said Rodriguez, a 20-year-old from the Dominican Republic, didn’t have “tremendous” English.

Mather also complained about the cost associated with having an interpreter for Iwakuma, a former All-Star who pitched a no-hitter for the Mariners and is a current special assistant for the club.

“Wonderful human being — his English was terrible. He wanted to get back into the game, he came to us, we quite frankly want him as our Asian scout/interpreter,” Mather said. “I’m going to say, I’m tired of paying his interpreter. When he was a player, we’d pay Iwakuma ‘X,’ but we’d also have to pay $75,000 a year to have an interpreter with him. His English suddenly got better. His English got better when we told him that.”

“We are proud of the international players who have made baseball better through their outstanding examples of courage and determination, and our global game is far better because of their contributions. His misguided remarks do not represent the values of our game and have no place in our sport,” MLB said.

Mather also drew the ire of the players’ union after expressing his opinion the club would not have top prospects Jarred Kelenic or Logan Gilbert on the major league roster to start the season as a way to manipulate their service time.

Stanton insisted roster decisions have not been predetermined and general manager Jerry Dipoto and manager Scott Servais will make the final call.

“The club’s video presentation is a highly disturbing yet critically important window into how players are genuinely viewed by management. Not just because of what was said, but also because it represents an unfiltered look into club thinking,” the union statement read.

The video was another transgression during Mather’s tenure. A year after his promotion, Mather was issuing statements after allegations of harassment were made by two former female employees — the former executive assistants to Mather and then-Executive Vice President Bob Aylward.

The allegations were revealed in a 2018 report by the Seattle Times. The team said it had “made amends” with those employees. The claims dated back to the late 2000s.