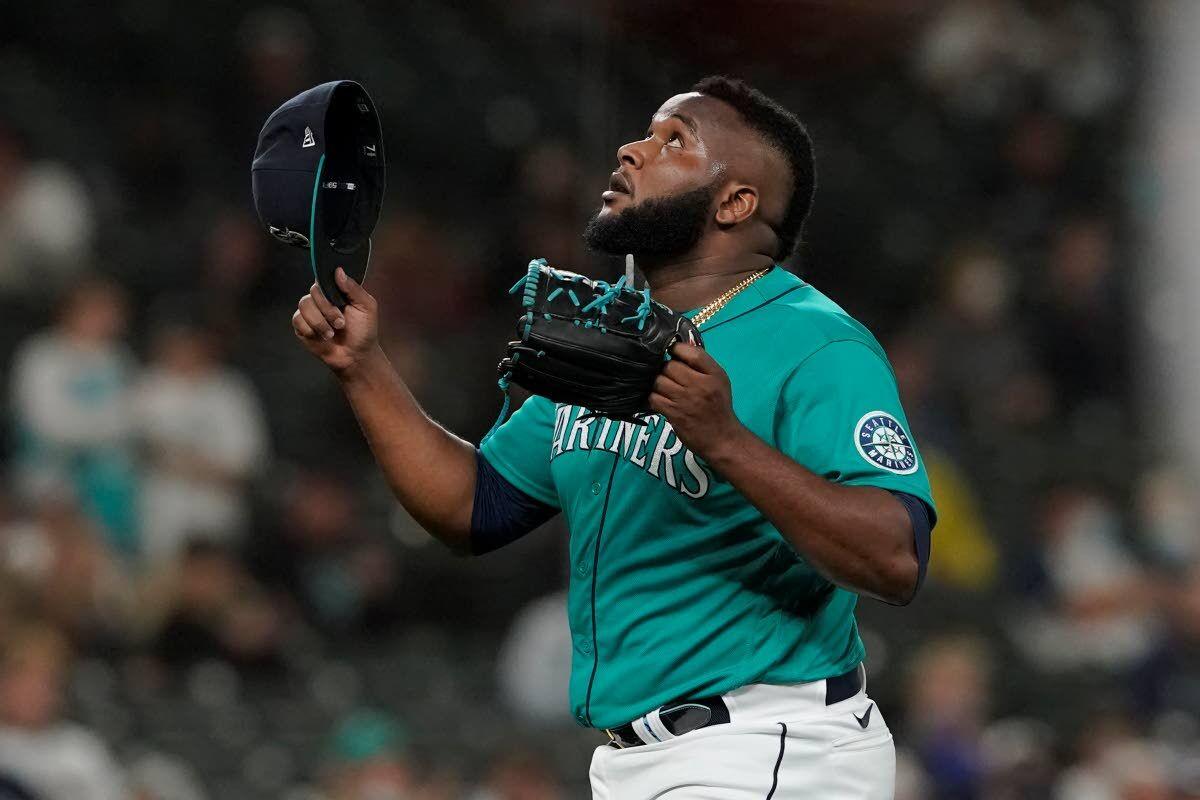 Seattle Mariners pitcher Diego Castillo reacts at the end of the eighth inning of a baseball game against the Arizona Diamondbacks, Friday, Sept. 10, 2021, in Seattle. (AP Photo/Ted S. Warren) 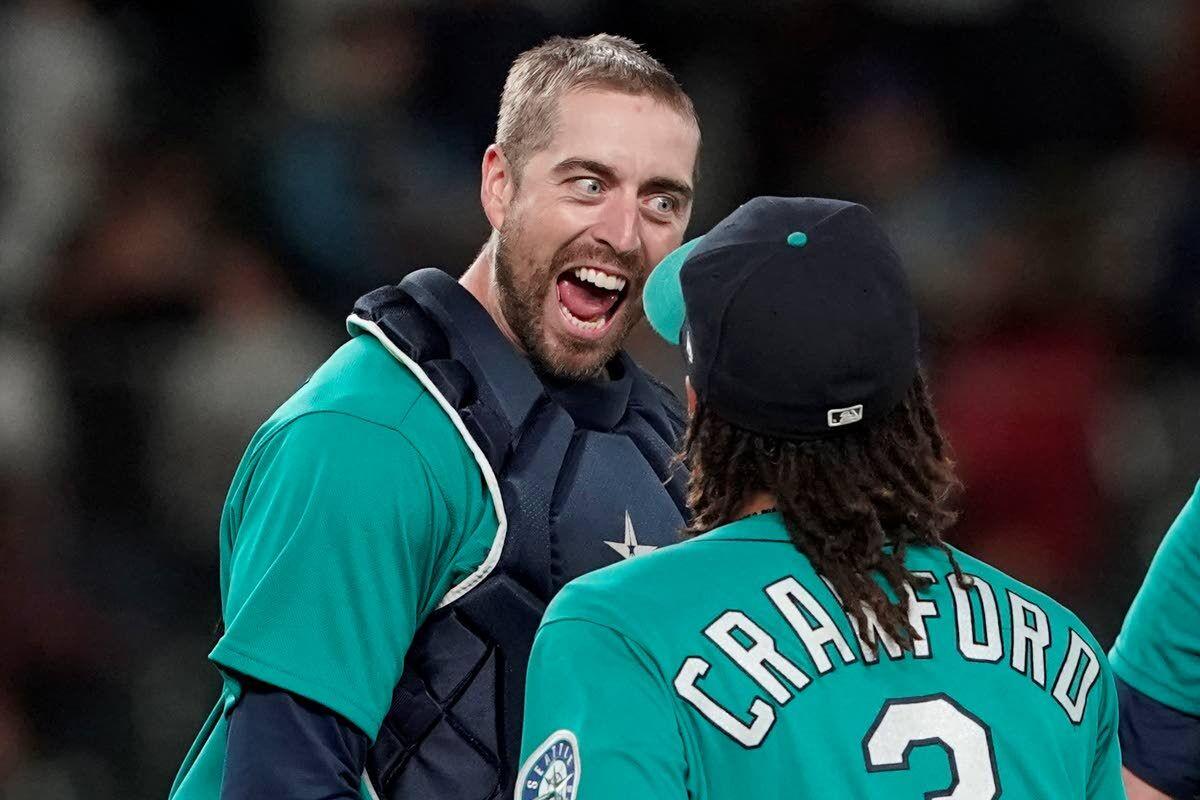 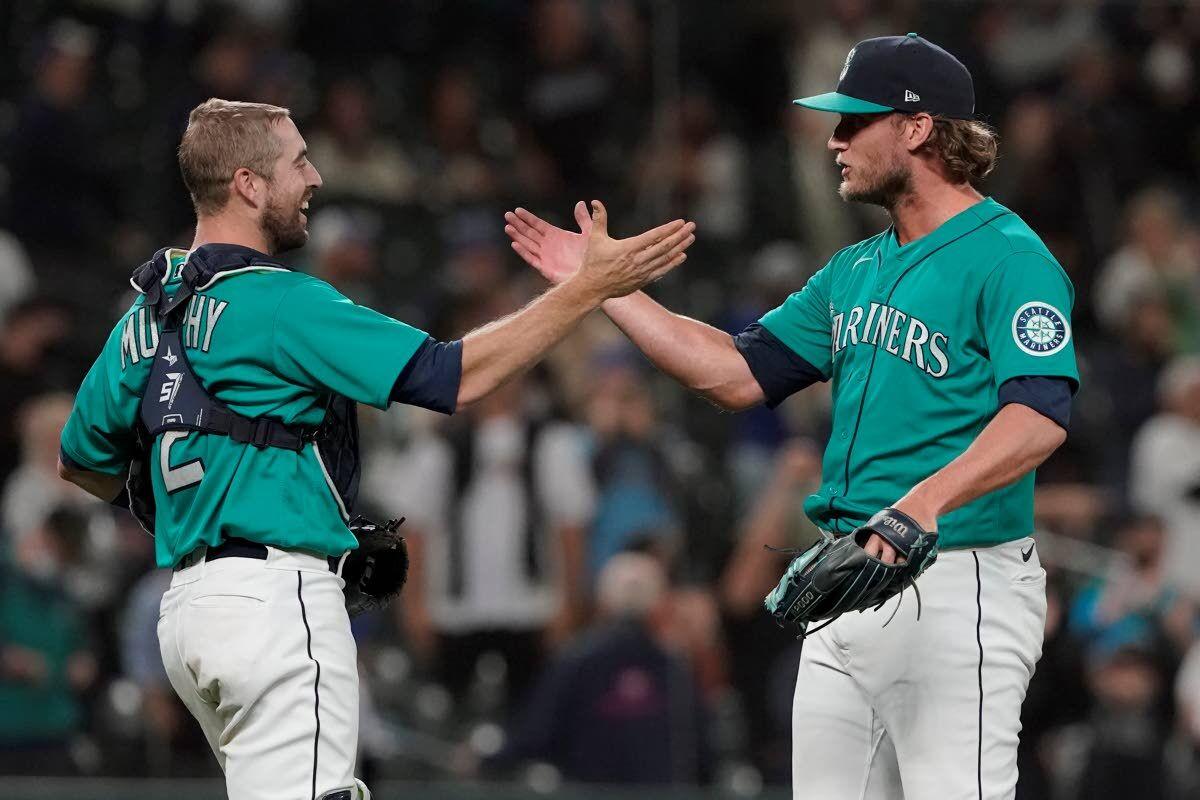 Seattle Mariners pitcher Diego Castillo reacts at the end of the eighth inning of a baseball game against the Arizona Diamondbacks, Friday, Sept. 10, 2021, in Seattle. (AP Photo/Ted S. Warren)

SEATTLE — Tom Murphy hit a two-run home run in the second inning and added a solo shot in the sixth Friday as the Seattle Mariners beat the Arizona Diamondbacks 5-4 for their eighth win in 11 games.

Seattle continued to inch closer in the American League wild-card race, pulling within one game of New York for the second spot in the logjammed standings.

“I think the biggest thing we’ve done is mitigate those down stretches really to find a way to win somehow to break up the monotony of losing two, three, four games in a row,” Murphy said. “This is the best team I’ve ever been on when it comes to that. It’s incredible how much morale we have and how much we don’t allow what happened yesterday to affect us today.”

Murphy’s fifth career multihomer game was the catalyst as a couple of defensive mistakes handed Arizona three runs. Murphy’s two-run shot in the second gave Seattle a 3-2 lead, and his solo blast in the sixth just cleared the fence in deep left-center field. The homers came against Arizona starter Madison Bumgarner.

“He’s been probably one of our most consistent at-bats here over the last week or so, just grinding through it,” Seattle manager Scott Servais said. “Obviously, his niche is killing the lefties. He usually stays right on left-handed pitching, and he was right there again tonight.”

J.P. Crawford led off the game with a solo homer for Seattle, and Ty France had a key two-out, two-strike single in the fifth inning that scored Dylan Moore and snapped a 3-3 tie.

Bumgarner (7-10) pitched six innings, but the three home runs allowed were a season-high.

“It was a lot better than the previous three (starts), but result wise was pretty much the same,” Bumgarner said. “That can be frustrating.”

An inning later, Gonzales’ throwing error on a pick-off attempt advanced Ketel Marte to third, and he scored on Carson Kelly’s sacrifice fly. But that was all Arizona got off Gonzales, who retired 11 of the final 12 he faced and felt his fastball got better as the game went on.

“Facing these guys literally last week, that was the game plan,” Gonzales said. “I was proud of us. We executed, we were stubborn, didn’t come off that plan and it worked out for us.”

Arizona pulled within 5-4 when prospect Seth Beer hit a solo homer off Diego Castillo in the eighth inning in his first major league at-bat. Beer was called up from Triple-A Reno earlier in the day and was the fourth player in Diamondbacks’ history to homer in his first at-bat. The last was John Hester in 2009.

“Kudos to him for being prepped and ready in that situation,” Arizona manager Torey Lovullo said. “He dropped the barrel on the ball. It was a beautiful swing.”

Castillo escaped the eighth, and Drew Steckenrider struck out the side in the ninth for his eighth save.

TRAINER’S ROOM — Mariners right-hander Justin Dunn (shoulder) threw a simulated game. Manager Scott Servais said they need to see how Dunn feels coming out of it, and he will likely would need one more outing like that before considering a rehab assignment. ... Outfielder Jake Fraley (shoulder) could join Triple-A Tacoma on a rehab assignment sometime this weekend.

UP NEXT — Diamondbacks right-hander Humberto Castellanos (1-1, 3.65) starts again against Seattle. Castellanos allowed five runs in 3 2/3 innings against the Mariners last weekend. This will be his first career road start. Mariners right-hander Chris Flexen (11-5, 3.56) will make his second consecutive start against Arizona. Flexen threw six innings and allowed three runs but received a no decision last week. Seattle is 18-8 in Flexen’s 26 starts this season.