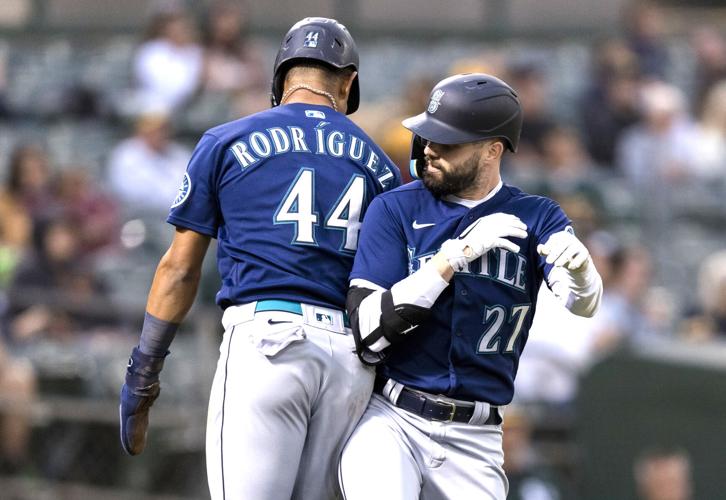 Mariners slugger Jesse Winker celebrates with Julio Rodriguez, left, after hitting a two-run home run against the Athletics during a game Wednesday in Oakland, Calif. 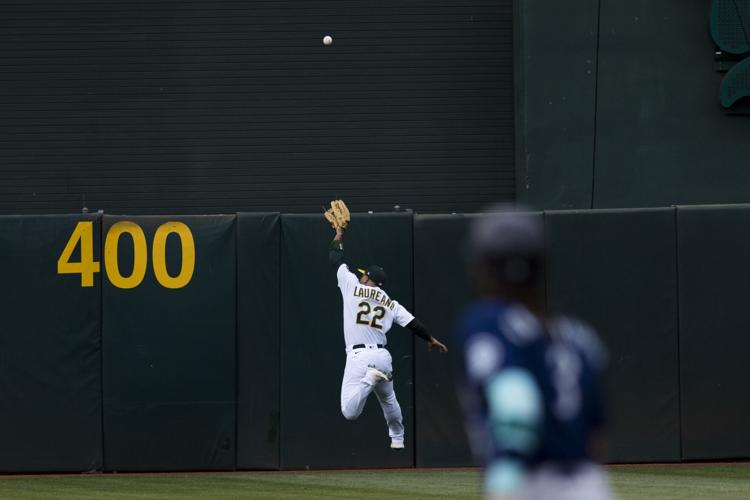 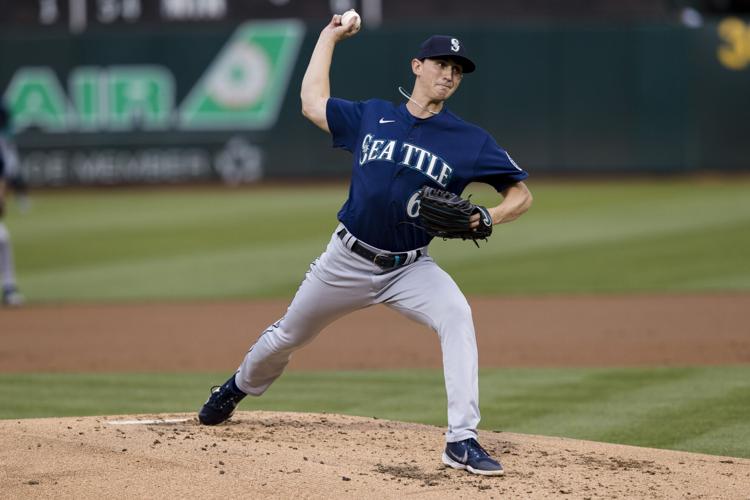 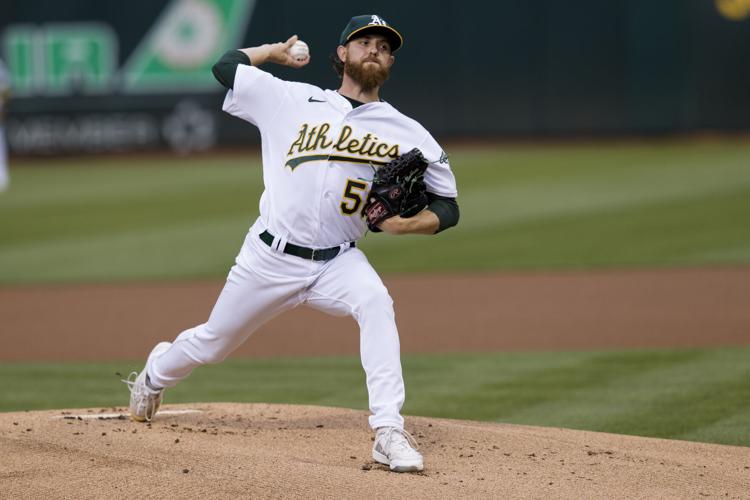 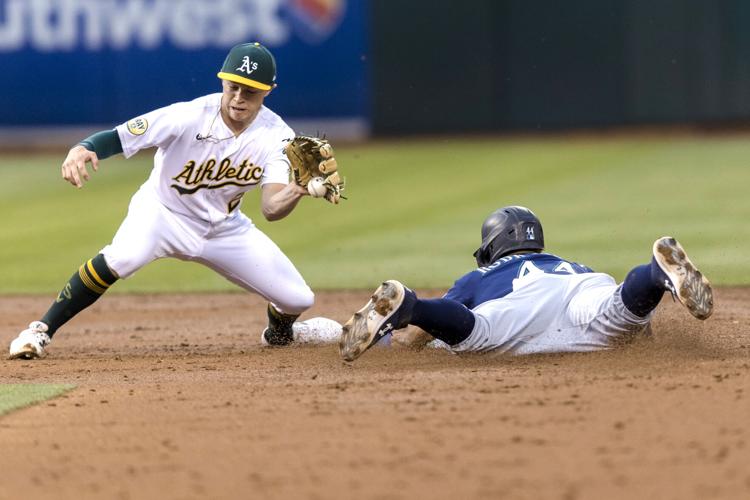 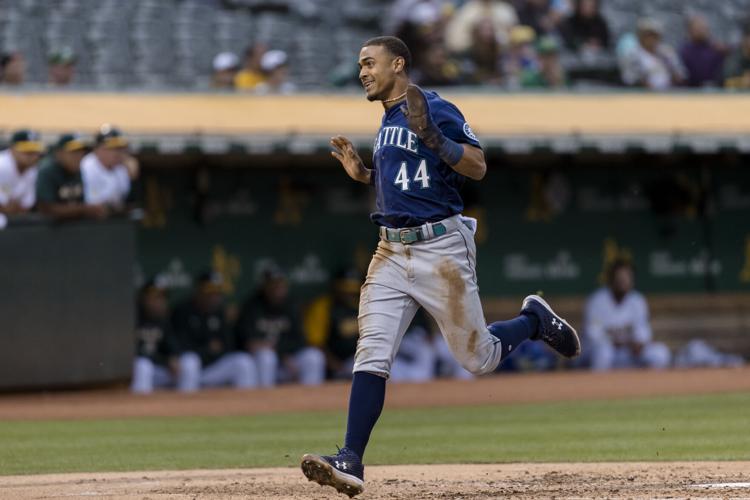 Seattle Mariners' Julio Rodriguez reacts as he runs home to score against the Oakland Athletics on a single by Jesse Winker during the third inning of a baseball game in Oakland, Calif., Wednesday, June 22, 2022. (AP Photo/John Hefti)

Mariners slugger Jesse Winker celebrates with Julio Rodriguez, left, after hitting a two-run home run against the Athletics during a game Wednesday in Oakland, Calif.

Seattle Mariners' Julio Rodriguez reacts as he runs home to score against the Oakland Athletics on a single by Jesse Winker during the third inning of a baseball game in Oakland, Calif., Wednesday, June 22, 2022. (AP Photo/John Hefti)

J.P. Crawford doubled twice and drove in two runs. Julio Rodríguez added two hits and scored twice for Seattle, which had dropped seven of nine before starting its road trip with a pair of victories against the worst team in the majors.

“A number of guys stepping up but none bigger than what we’ve seen out of Jesse Winker the last couple nights,” Mariners manager Scott Servais said. “He’s under control at the plate. He’s just trying to barrel balls up, he’s not overswinging, and the ball’s jumping off his bat.”

The A’s fell to 23-47 and used a position player on the mound. Oakland infielder Sheldon Neuse worked a 1-2-3 ninth on 11 pitches in his first career pitching appearance.

George Kirby (2-2) allowed five hits and had six strikeouts in six scoreless innings to continue a string of strong outings by Mariners starters while ending his own three-game skid. Seattle’s rotation has allowed two earned runs or fewer in 11 consecutive games, the team’s longest stretch since a franchise-record 12-game streak in 2014.

“The biggest thing was just try to get ahead and stay ahead,” Kirby said. “I did really well with that the first three or four innings. Got a little tired at the end, but when you’re getting ahead it makes the game a lot easier on yourself.”

A day after being part of three consecutive home runs by the Mariners in an 8-2 win, Winker had an RBI single in the third and then hit his sixth homer, a two-run drive to center in Seattle’s five-run fifth.

“It was a changeup away and I just wanted to stay through it,” Winker said. “Got a good part of the bat and got up and got out.”

Kirby, whose only other career win was May 31 at Baltimore, pitched with runners on in almost every inning but didn’t allow anyone past first base until the fifth when Oakland’s first two batters reached. Kirby then struck out Chad Pinder and got Allen and Tony Kemp to fly out.

“Starting pitching, that’s the name of the game for us the last few weeks,” Servais said. “George again, outstanding tonight. Just dominating the strike zone. I think it was 17-of-23 first-pitch strikes. It’s his second consecutive outing where he really used all four of his pitches.”

Raleigh crushed a 3-1 sinker from Paul Blackburn off the facade high above the center-field fence in the second.

Blackburn (6-3) allowed seven runs and 10 hits in four innings. He had given up one run over his previous 13 1/3 innings.

Athletics: OF Stephen Piscotty singled in four at-bats in his second rehab game with Triple-A Las Vegas. Piscotty has been on the injured list with a strained left calf since May 7.

Mariners: LHP Robbie Ray (6-6, 4.25 ERA) faces the A’s for the second time this season. He had 10 strikeouts in seven innings against Oakland on May 25.

Athletics: RHP Frankie Montas (3-7, 3.53 ERA) has allowed two earned runs or fewer in nine starts this season but has one win in his past 11 appearances.