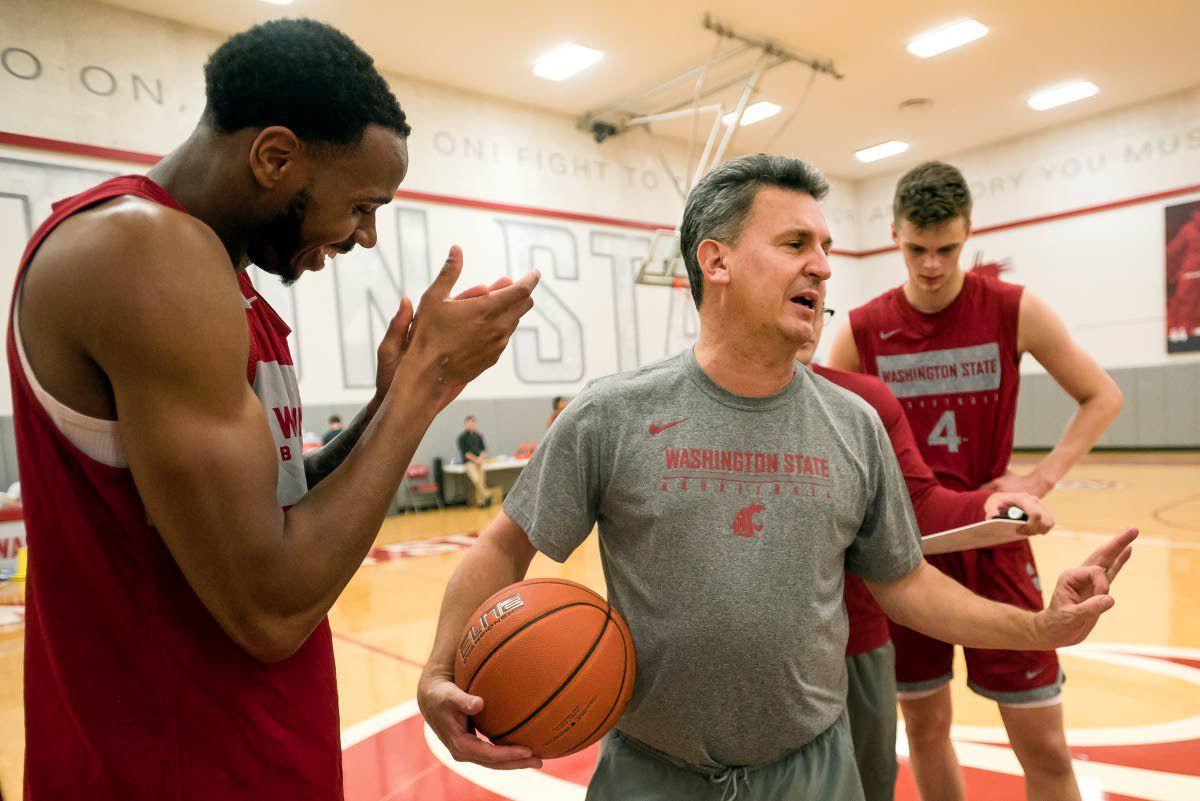 Head coach Kyle Smith huddles with his team during practice in October 2019 in the Bohler Athletic Complex at Washington State University in Pullman. Smith hopes the Cougars will continue to improve next season as this year’s ended early because of the coronavirus. 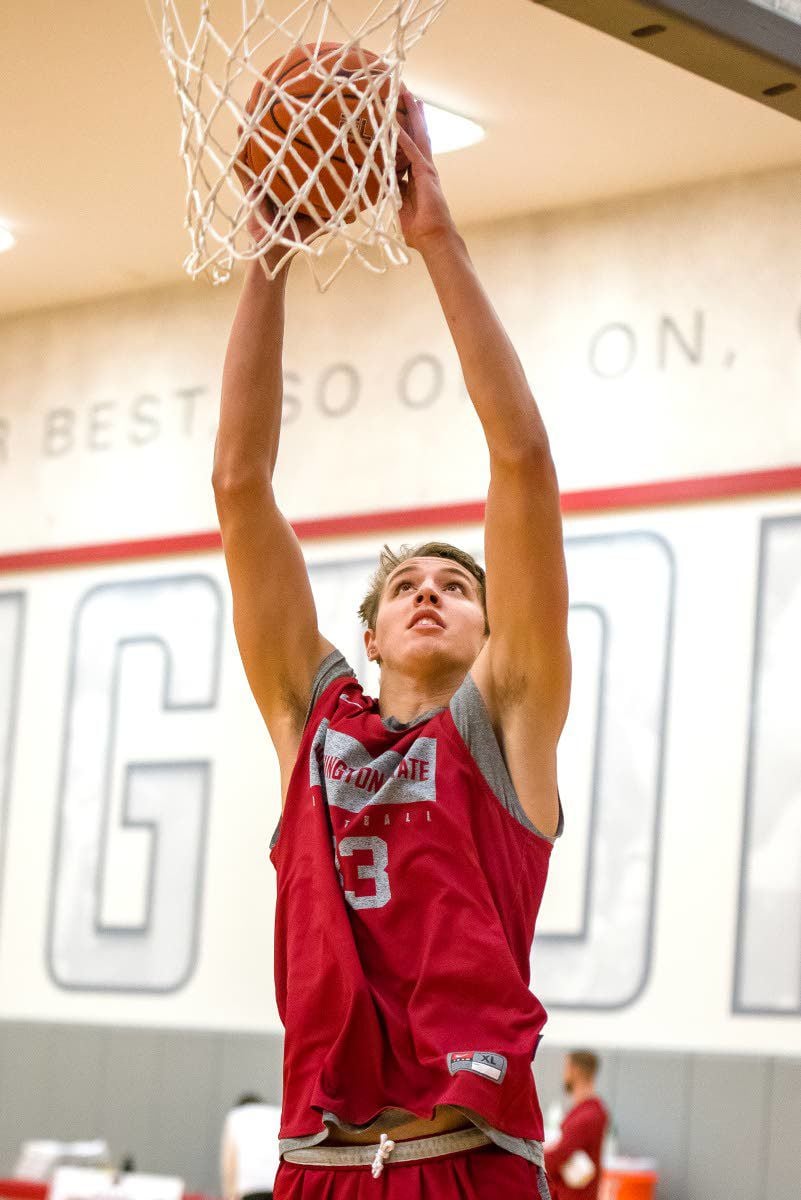 Forward Brandton Chatfield, of Clarkston, puts the ball away during practice. 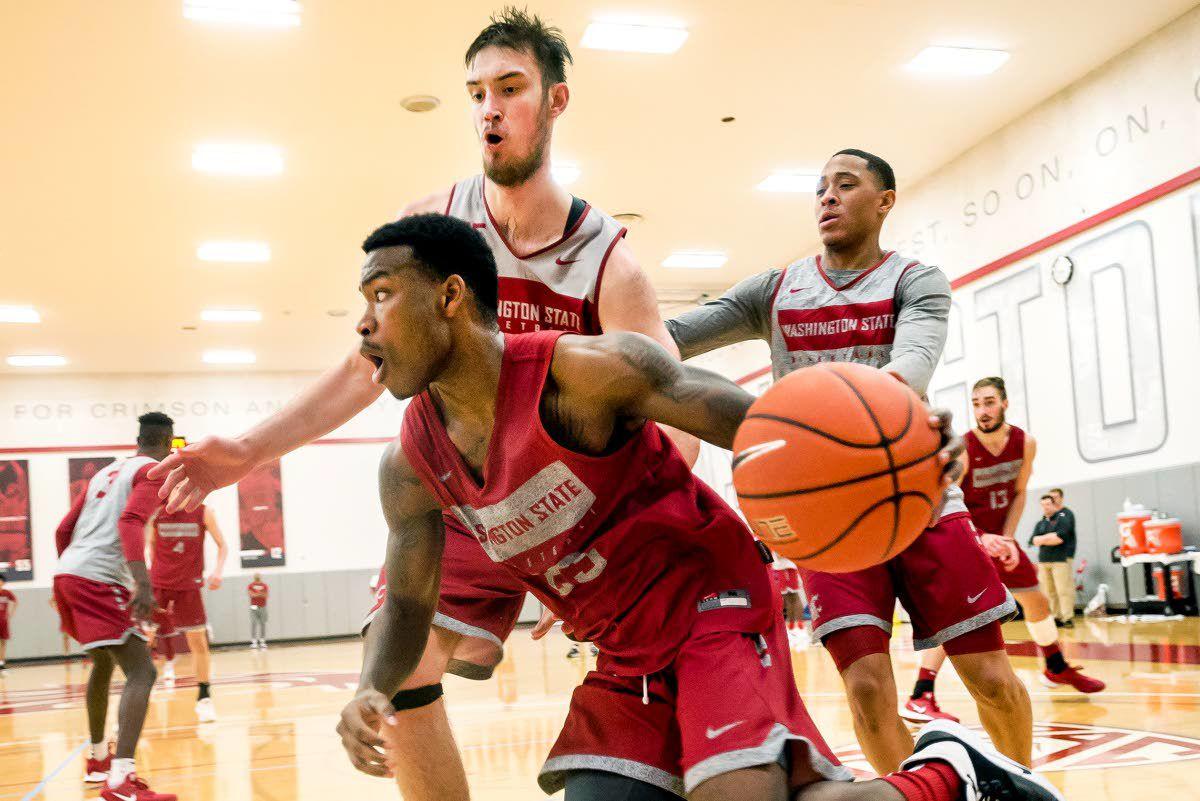 Guard Jaylen Shead (23) zips past center Volodymyr Markovetskyy (15) during practice in the Bohler Athletic Complex at Washington State University on Tuesday in Pullman. 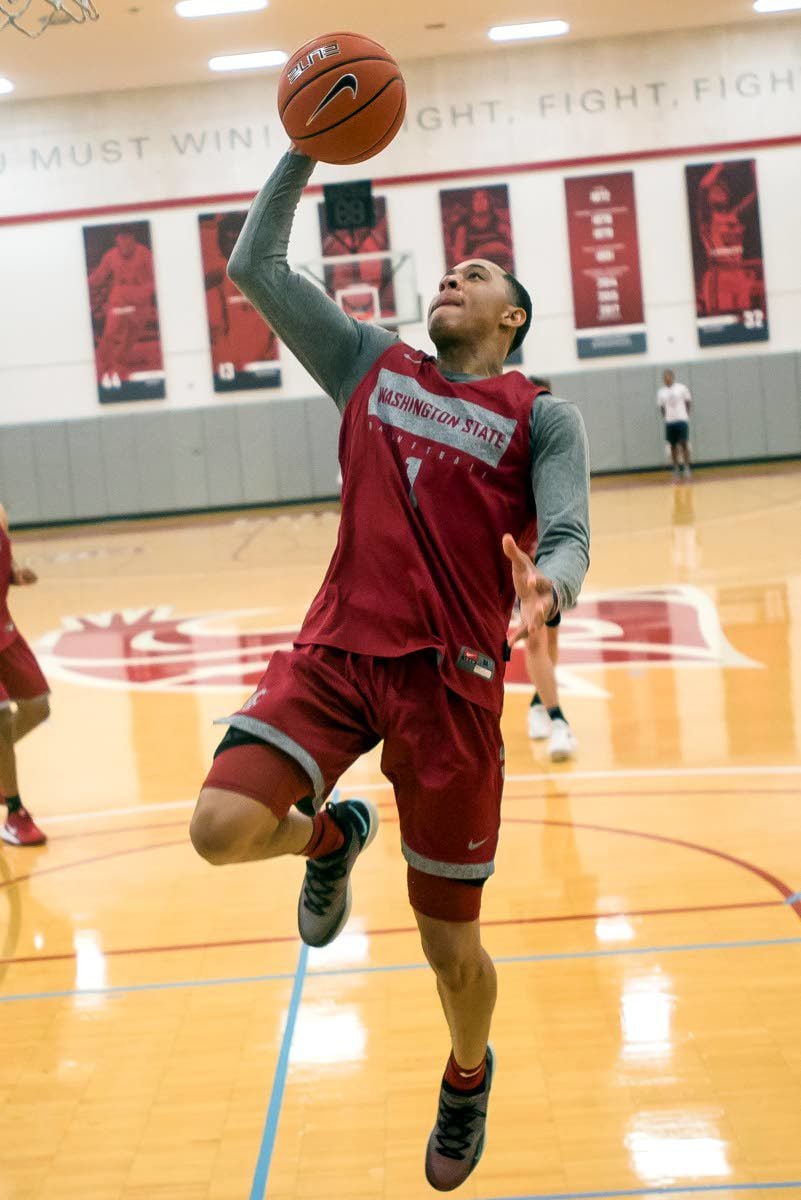 Guard Jervae Robinson (1) takes a shot during practice in the Bohler Athletic Complex at Washington State University on Tuesday in Pullman.

Head coach Kyle Smith huddles with his team during practice in October 2019 in the Bohler Athletic Complex at Washington State University in Pullman. Smith hopes the Cougars will continue to improve next season as this year’s ended early because of the coronavirus.

Forward Brandton Chatfield, of Clarkston, puts the ball away during practice.

Guard Jaylen Shead (23) zips past center Volodymyr Markovetskyy (15) during practice in the Bohler Athletic Complex at Washington State University on Tuesday in Pullman.

Guard Jervae Robinson (1) takes a shot during practice in the Bohler Athletic Complex at Washington State University on Tuesday in Pullman.

“This summer was kinda funny,” Pollard said, “because I felt like we got a new player on the team every week.

“Start of a new week, then all of the sudden there’s some new guy sitting in the locker room.”

In March, Cougars coach Ernie Kent was let go after six hapless years on the Palouse, which produced a 58-98 record and a lot of offense over defense.

Afterward, Pollard was one of many to ponder greener pastures through the NCAA’s transfer portal. Five of his former teammates departed this offseason, including WSU’s starting point guard and a key, contributing post.

The same thing had happened the year before, when a handful of players realized they’d be part of a rebuild rather than a contender.

Pollard persevered through it all. Particularly because the new boss, Kyle Smith, made an effective pitch, and did so to three uncertain standouts, all of whom reportedly almost left, but each of whom ended up staying.

The trio of Pollard, small forward CJ Elleby and guard/forward Marvin Cannon will open the Smith era alongside a horde of under-the-radar newbies at 6 p.m. Thursday against Seattle University in Beasley Coliseum.

“Once (Smith) was hired, I had probably two weeks where I met with him at least every other day,” Pollard said. “I just tried to get to know him, what he envisions, his system, and how I can fit in it.”

It turns out, Pollard’s worries were laid to rest. He was sold on the coach’s defense-first, fundamentals-based principles, which had induced a historic turnaround in the early-2010s for Columbia of the Ivy League, then turned the University of San Francisco into a consistent 20-win team.

“When you hear ‘Nerdball,’ you kinda get this idea of a bunch of coaches in a back room with calculators,” Pollard said. “When we’re out here in practice, it’s the opposite. There’s this huge emphasis on toughness.”

Smith implemented his style so his teams “never beat ourselves.” He knew that was the case with the 2018-19 Cougars — an 11-21 team who went 4-14 in Pac-12 play. They ranked 291st nationally in defensive efficiency, and 235th in defensive rebounding. They allowed second chances like clockwork, and toiled to regroup in transition.

“It’s hard to outscore people at this level,” Smith said. “You gotta find a way to be gritty.

Smith’s got the grit down with his assistants, which include Derrick Phelps, a one-time North Carolina point guard and 1993 national champion, and Jim Shaw, an “intense” former head coach at Western Oregon.

Smith’s also got it down with his six transfers — against just five returners. It’s a group headlined by Texas State transfer Jaylen Shead, one of the Sun Belt’s best last year. Tagging along is guard Isaac Bonton, a Casper College transfer whose all-around game the WSU staff is high on.

When the Cougs aren’t going small-ball, Pollard will have support down low in Colorado State transfer Deion James and 7-foot-1 freshman Volodymyr Markovetskyy.

“We got a bunch of gym rats,” Smith said. “(The transfers) know their time’s fleeting and they’re really motivated to do well and do it the right way.”

It was along that line of thinking that prompted sophomore Elleby to return after a spring of testing the NBA draft waters. The freshman All-Pac-12 forward — who was named to the Wooden watch list Tuesday — was instructed by NBA players and coaches to tune his game, and who better than Smith to become a more comprehensive player under?

“This year, we’re gonna be very fundamental, stronger on defense. That’s the biggest part,” said Elleby, who can facilitate just as easy as he scores. “We won’t have much slippage.”

So there’ll be some familiarity, but not much about this Wazzu team will look like last year’s.

“I’ve done this three times now, and I’ve never watched film from the previous staffs; I don’t wanna have any preconceived notions,” Smith said. “We’ll put our stuff in, figure it out, and have them adjust to us, rather than figure out what they did before.”