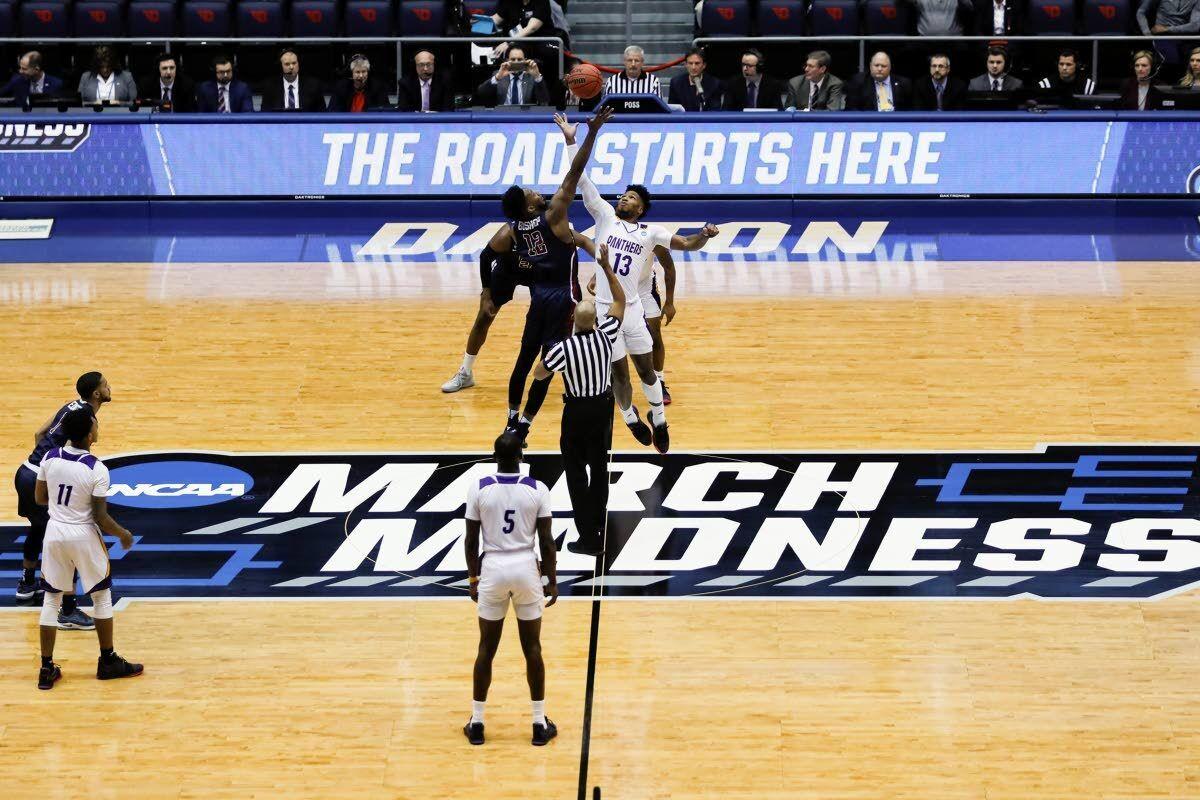 FILE - In this March 19, 2019, file photo, Fairleigh Dickinson's Kaleb Bishop (12) and Prairie View A&M's Iwin Ellis (13) leap for the opening tip-off in the first half of a First Four game of the NCAA college basketball tournament in Dayton, Ohio. NCAA President Mark Emmert told the organization's more than 1,200 member schools Friday, June 18, 2021, that he will seek temporary rules as early as July to ensure all athletes can be compensated for their celebrity with a host of state laws looming and congressional efforts seemingly stalled. (AP Photo/John Minchillo, File) 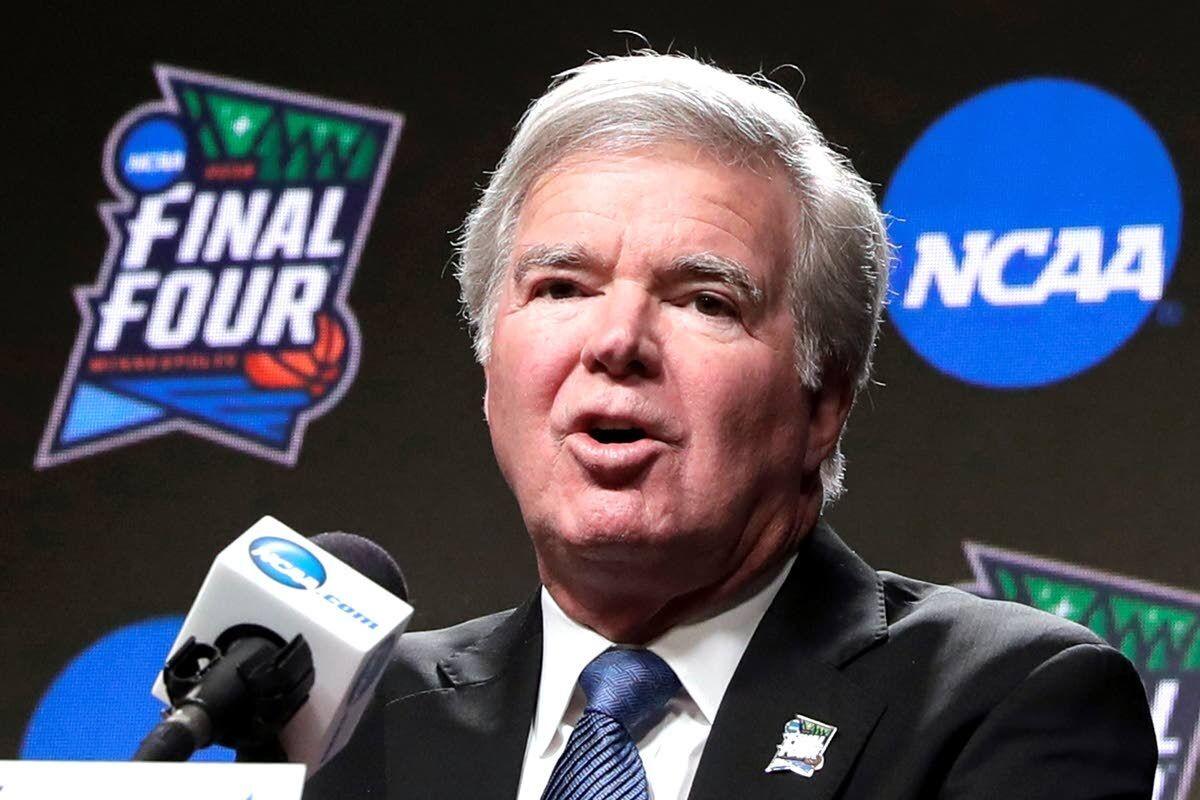 FILE - In this March 19, 2019, file photo, Fairleigh Dickinson's Kaleb Bishop (12) and Prairie View A&M's Iwin Ellis (13) leap for the opening tip-off in the first half of a First Four game of the NCAA college basketball tournament in Dayton, Ohio. NCAA President Mark Emmert told the organization's more than 1,200 member schools Friday, June 18, 2021, that he will seek temporary rules as early as July to ensure all athletes can be compensated for their celebrity with a host of state laws looming and congressional efforts seemingly stalled. (AP Photo/John Minchillo, File)

It’s taken way too long but, finally, Mark Emmert is speaking the truth. He’s seen the future, and it doesn’t include him or his colleagues at the NCAA.

Actually, Emmert isn't going that far. He still wants the NCAA to exist, if only to regulate small sports and continue to ride the gravy train that is the NCAA basketball tournament.

“You can lean back and do nothing and then just wait and see what happens,” Emmert told a group of reporters this week. “Or you can say, ‘Look, we’re in it. This is a new era.’ We need to take advantage of it, pivot as much as we can ... and embrace that change rather than fighting it.”

That by itself is a remarkable statement for the man who, at least for now, still is tasked with ensuring the NCAA remains relevant in an era where many of the things it does no longer are necessary. It’s not quite a concession, but a reflection of the reality that college athletes being allowed to have a few dollars in their pockets has changed everything.

It wasn’t that long ago that Emmert squarely was in the other camp, arguing the future of college sports was at stake should rules against accepting money be wiped off the books.

Now he thinks conferences and individual schools should point the way toward finding the path forward. Assuming, of course, they don’t interfere with the basketball tournament that brings in hundreds of millions per year to NCAA coffers.

“I think this is a really, really propitious moment to sit back and look at a lot of the core assumptions and say, ‘You know, if we were going to build college sports again, and in 2020 instead of 1920, what would that look like?’” Emmert said.

The truth is, it’s way past time to upend the archaic structure that served those running college sports well, if not the athletes themselves. Emmert and his ilk have known for more than a decade now that this day was coming, but that didn’t stop them from fighting it every step of the way.

I was in the courtroom in Oakland, Calif., in 2014 when the trial that eventually upended college sports as we know them unfolded. Former UCLA basketball star Ed O’Bannon and others sued the NCAA to force it to recognize the rights of athletes to own their name, likeness and images, and the NCAA trotted out Emmert and others to take the witness stand to tell the judge what horrors would take place if she ruled in the favor of the plaintiffs.

Among those testifying was the commissioner of the Big Ten at the time, Jim Delany, who said the idea of paying players would ruin the college experience and destroy the business model of big-time college sports. Delany testified if members of his league paid players they would be kicked out of the conference, and that it could bring about the end of the Rose Bowl as it was then structured.

That, of course, was nonsense then and it’s nonsense now. There’s way too much money involved in college football and basketball for any school to opt out of games to preserve the misguided notion of amateurism that has been the standard in major college sports for more than a half century.

Now the questions must be asked: What purpose does the NCAA serve anymore? Why shouldn’t it simply be disbanded?

The answer to the first question is easy enough. Outside of running March Madness, the NCAA oversees championships in a variety of sports, providing a framework for crowning national champions in sports like golf, lacrosse, baseball, softball and golf and tennis.

But those championships could easily be coordinated through the conferences. It’s already happened in football, where the NCAA was cut out of the championship postseason by the power conferences who decided to do things on their own.

Until now, the NCAA also has functioned as a policing network to make sure athletes didn’t get fancy cars or enough money to take their dates out to a movie and dinner. But with the Supreme Court paving the way for athletes to accept money there’s no way — or need — to police sports programs anymore.

It used to be rich boosters would provide the star quarterback a $75,000 SUV to tool around town. Now players will be able to use earnings from endorsements or TikTok videos to buy their own vehicles, eliminating the middleman.

College athletics are changing and changing fast. They no longer need an organization whose main purpose for so many years was to play defense against those changes.

It's time to face reality. The NCAA no longer is relevant going forward.

Dahlberg is a national sports columnist for The Associated Press.