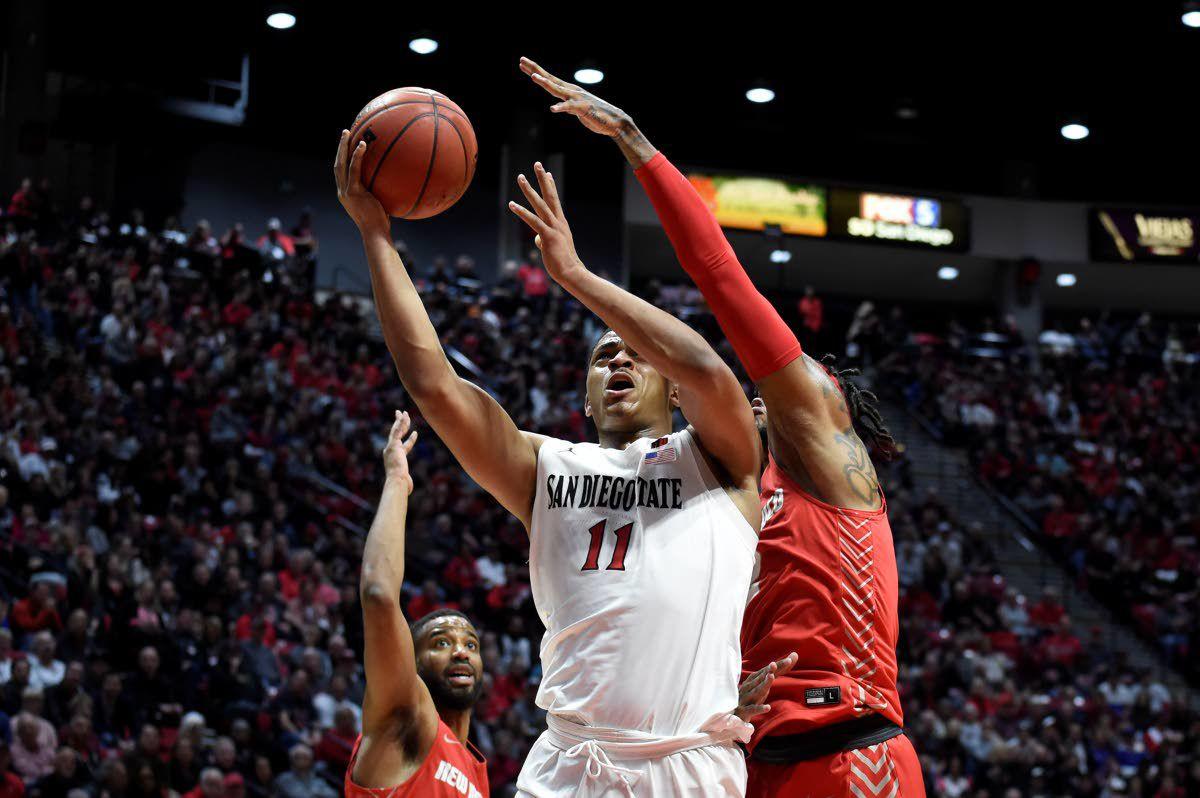 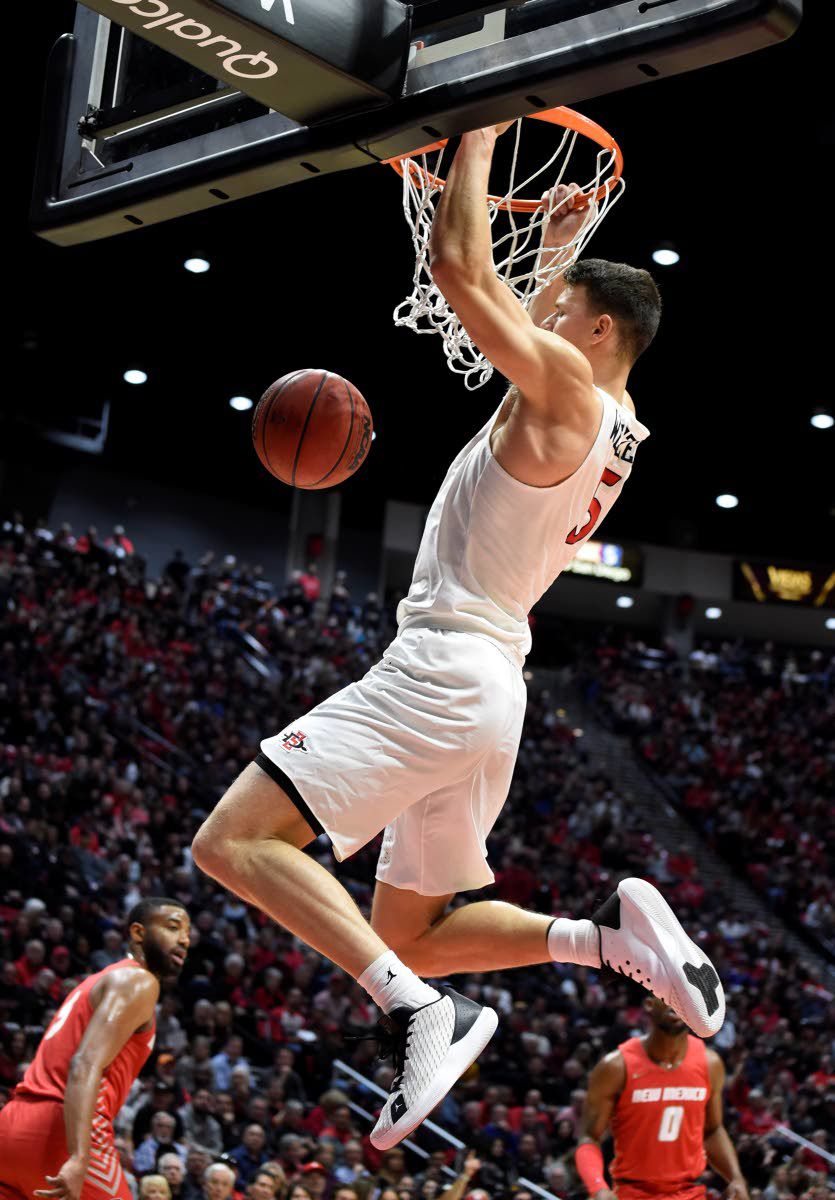 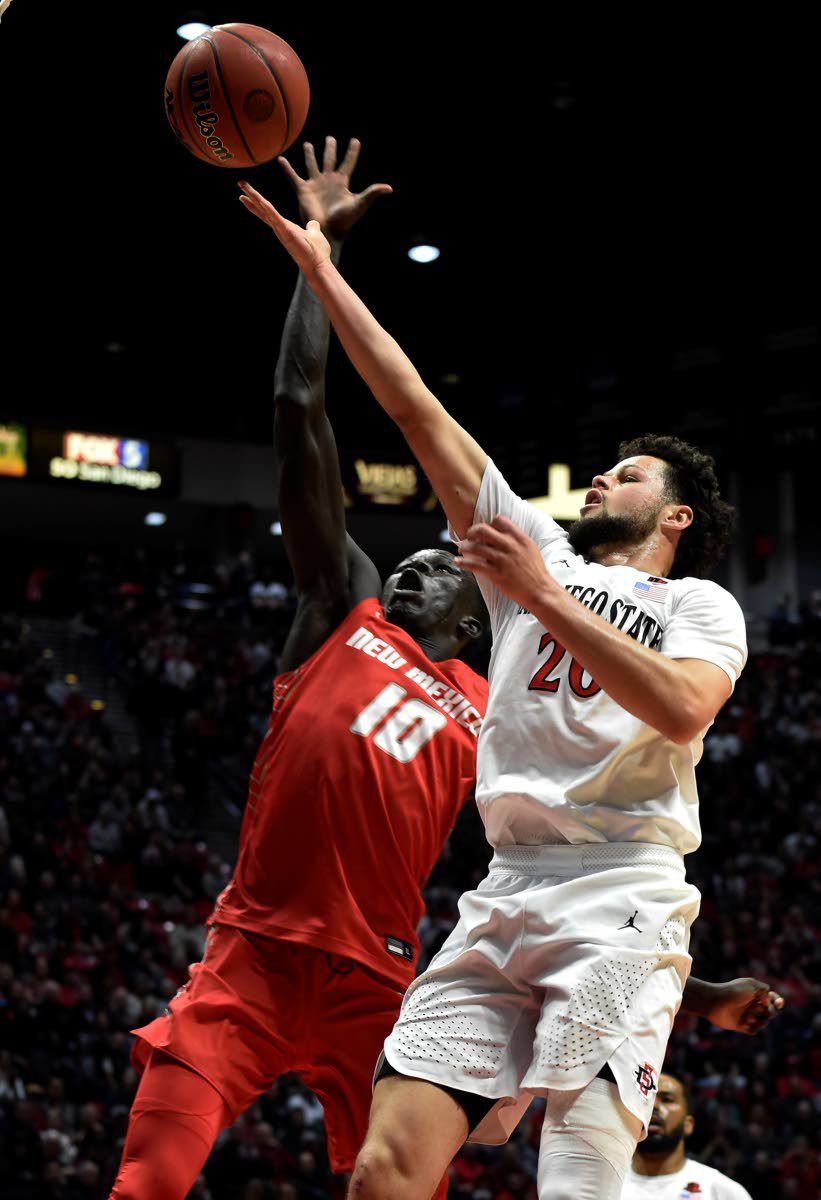 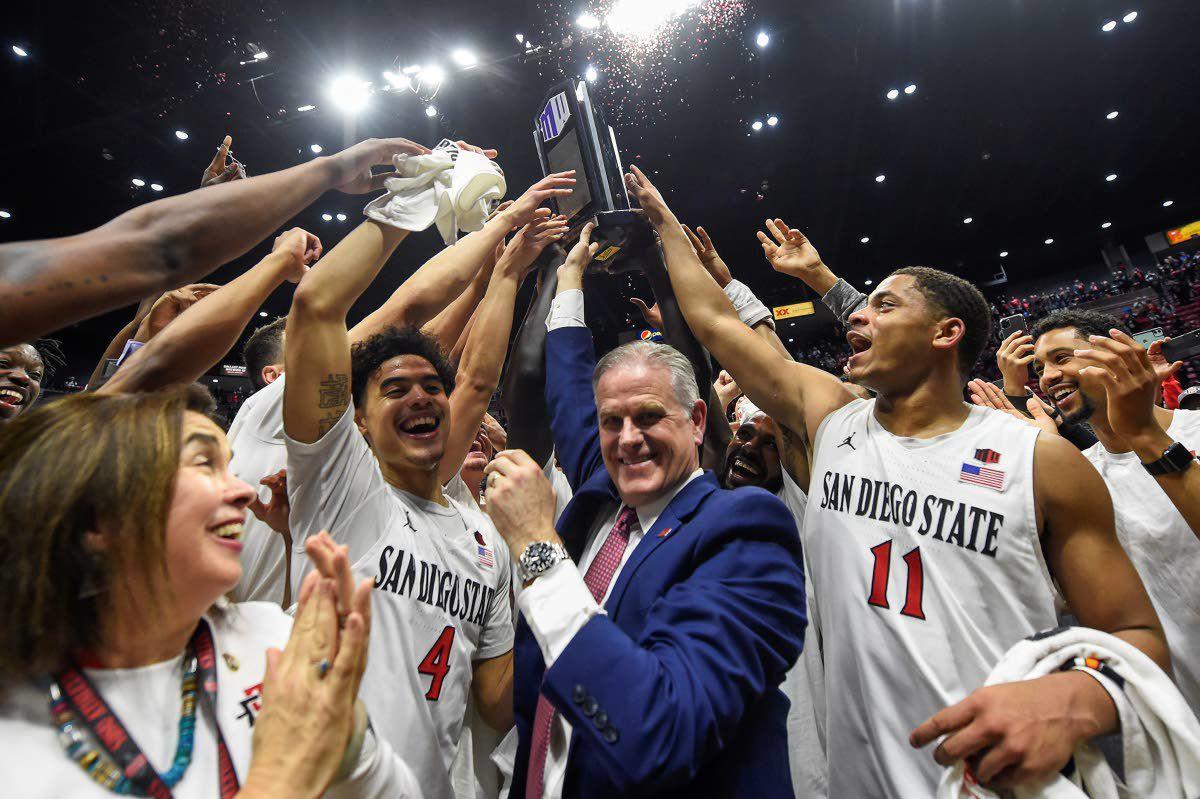 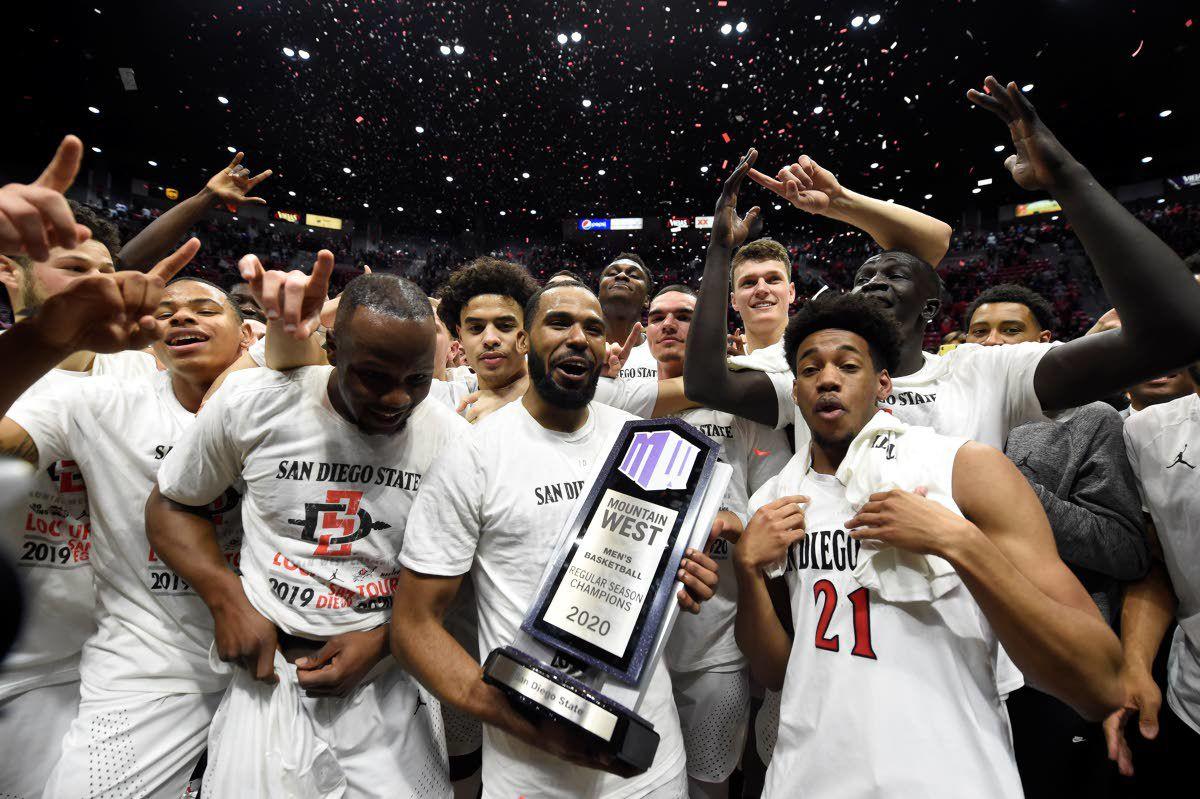 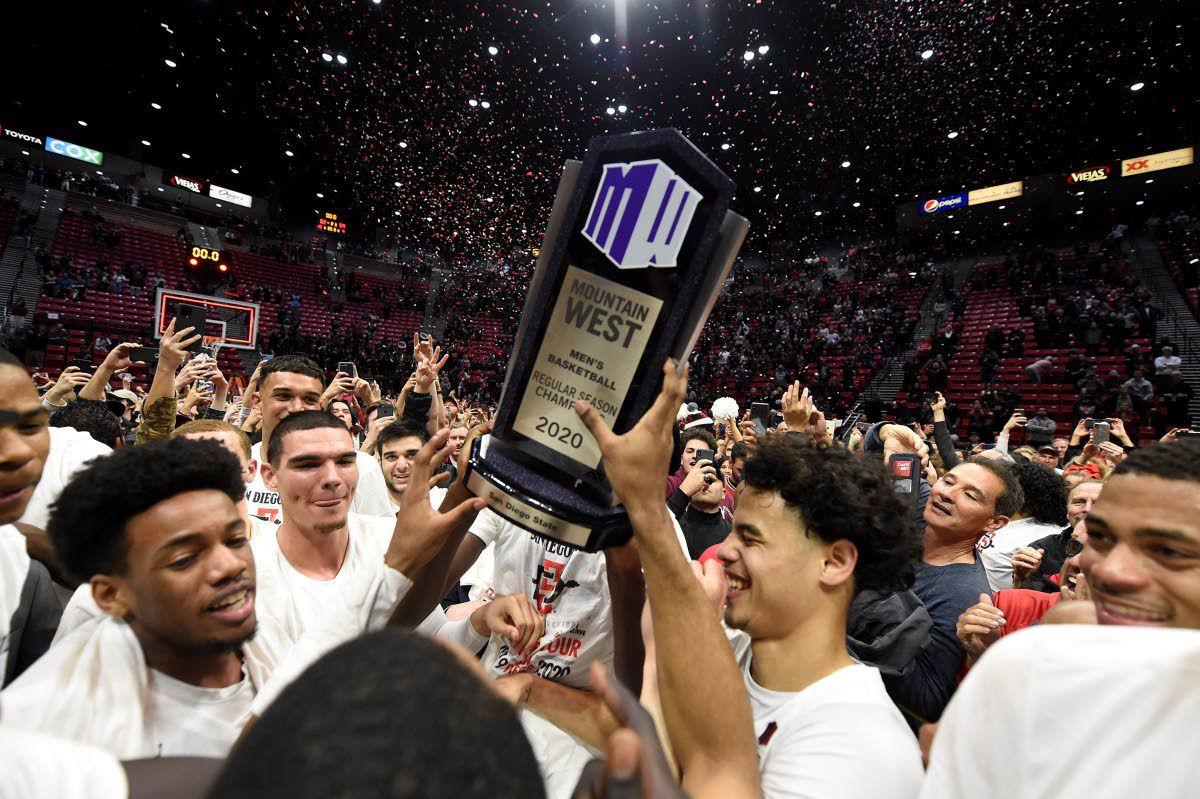 SAN DIEGO — The San Diego State Aztecs won the Mountain West Conference championship, were showered with confetti, cut down a net at Viejas Arena, doused coach Brian Dutcher with Gatorade and then reset their goals.

Junior forward Matt Mitchell had 22 points and 12 rebounds for his first career double-double and scored his 1,000th point for No. 4 San Diego State, which beat New Mexico 82-59 Tuesday night to claim the MWC title and remain the nation’s only undefeated team at 25-0.

“The hardest thing in basketball, obviously other than winning a Final Four, is winning a regular-season conference title, because you have to do it over the whole season,” Dutcher said. “To have the title outright already with four games to play is an incredible accomplishment.

“I told them in the locker room, now we have to get greedy,” said Dutcher, who has won a Final Four, as Steve Fisher’s assistant at Michigan in 1989. “We’ve got to try to win them all. It won’t be easy. ... Four really hard games to go, but now that we have the title, we have to have another goal, and that goal has to be to have a perfect season. That will be the next step, to try to finish with a perfect season.”

Yanni Wetzell added 20 points and nine rebounds for the Aztecs (25-0, 14-0 MWC), who clinched at least a share of the title in the first half when Utah State beat Colorado State, then won it outright with a suffocating defense that held New Mexico (17-9 6-7) to 26 points in the second half.

Mitchell, a junior forward from Riverside, scored his 1,000th career point on a bank shot early in the second half. That was part of a 9-2 run that expanded SDSU’s 35-33 halftime lead to 44-35. Mitchell also made a layup on a nice spin move, Flynn hit a jumper and Schakel a 3-pointer.

It was a big night for Mitchell.

He said surpassing 1,000 points was “special to me because I was able to not only reach 1,000, but reach it on a night we hang a banner and win the conference. I definitely will cherish tonight, but tomorrow I have to let it go and move on to the next four games we have.”

He also surpassed Kawhi Leonard on the school scoring list.

“I actually didn’t know that. Wow,” Mitchell said. “I’m happy I was able to do that. I feel that’s good company to be in.”

Mitchell has scored 50 points in the last two home games, including 28 on Feb. 1 when SDSU retired Leonard’s jersey.

“I saw the ball going down the court and I thought if I got it, I was going to take off and try to dunk it,” Mitchell said. “I honestly didn’t know there was somebody under the rim until I took off, but at that point it was bad for him. He was under the rim so he got dunked on.”

The Aztecs had a tough go in the first half with the short-handed but fired-up Lobos.

Wetzell had 14 points in the period and Mitchell 11.

Mitchell, Schakel and KJ Feagin each had two fouls in the first half, while New Mexico’s Corey Manigault had three, including a technical for taunting after a big dunk that gave the Lobos an early 10-5 lead. Manigault drew a second technical late in the second half and was ejected.

“I thought their defense was exceptional and really kind of cranked up in the second half,” New Mexico coach Paul Weir said. “We gave so much in the first half and obviously tried to do that in the second half, but they just wear on you.

“They’re a great team,” he added. “Flynn’s defense alone sends a lot of messages to people. I thought our guys played hard and really tried, but you have to credit what is a really great team on the other side.”

New Mexico: The Lobos remain without suspended players JJ Caldwell and Carlton Bragg Jr. JaQuan Lyle played his second game back from a two-game suspension for his role in an off-campus party that was attended by several Lobos athletes where a shooting left two people with non-life-threatening injuries.

San Diego State is at Boise State on Sunday.