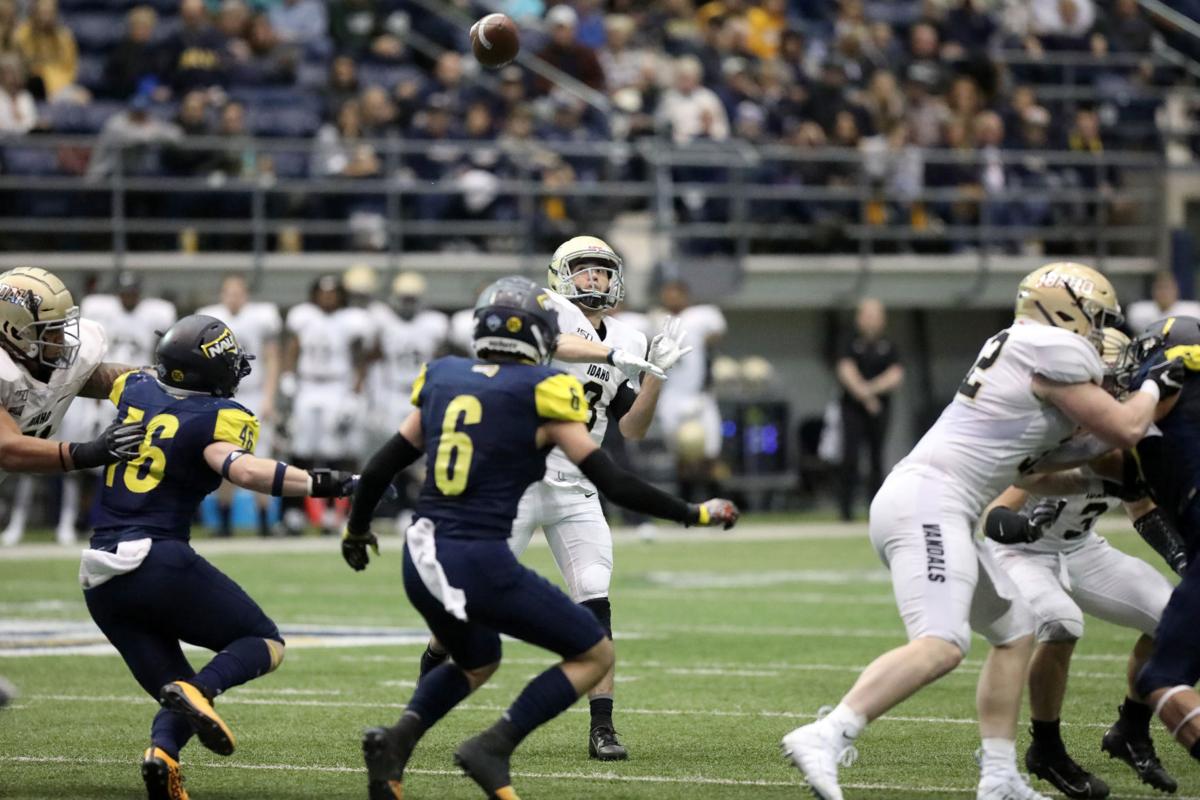 Idaho quarterback Mason Petrino (throwing) set career marks, completing 35 of his 42 passes for 491 yards and six touchdowns. He ran for 65 yards and a score as well in his final game as a Vandal. 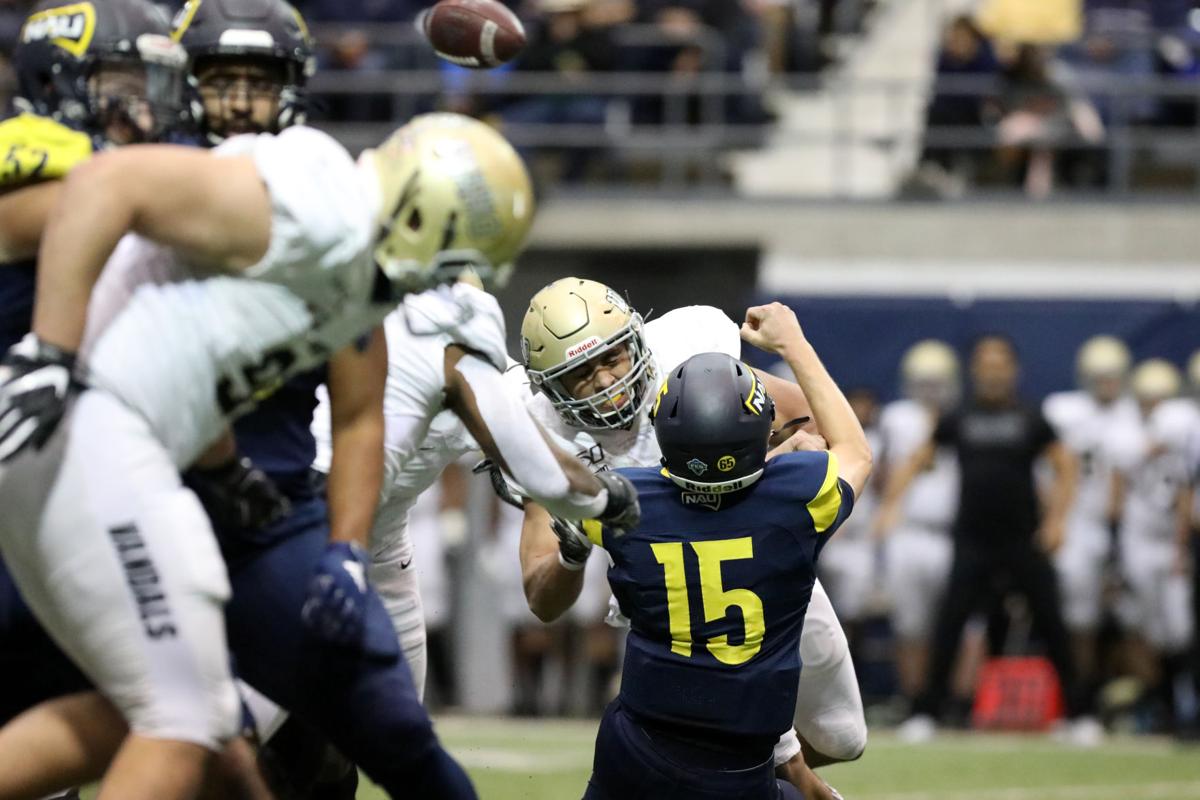 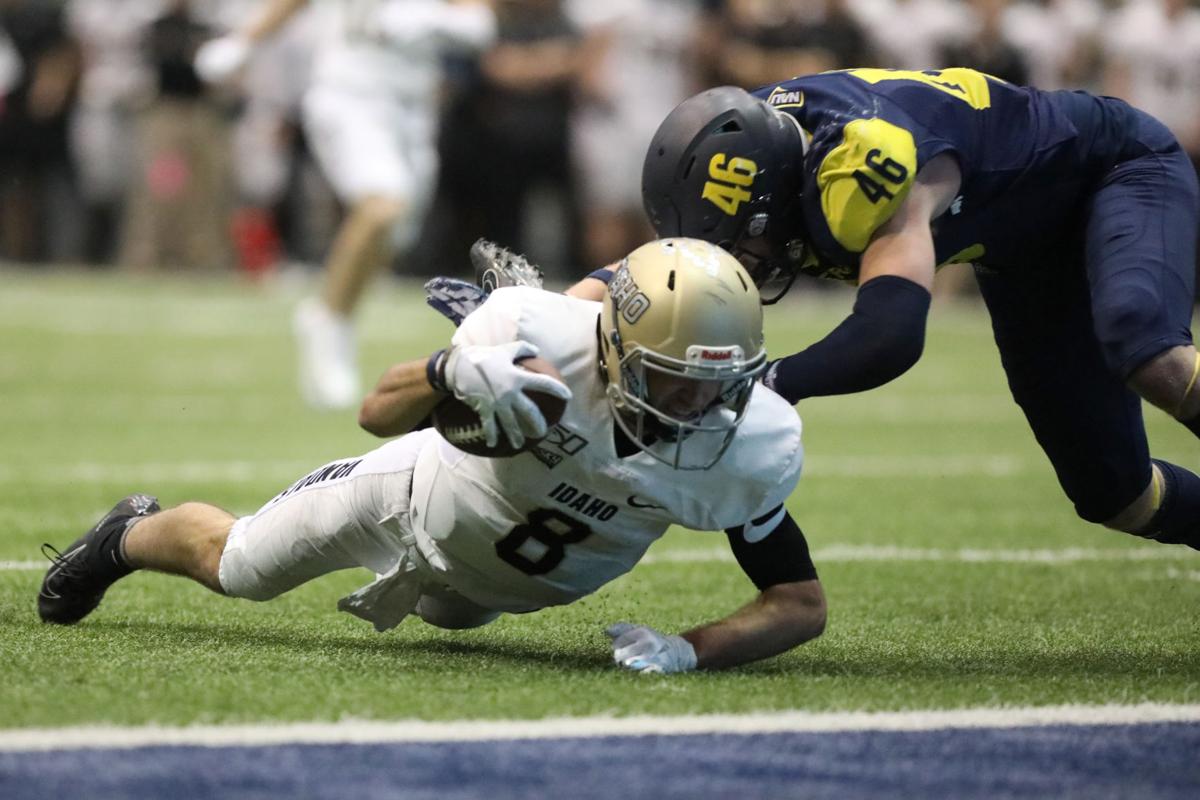 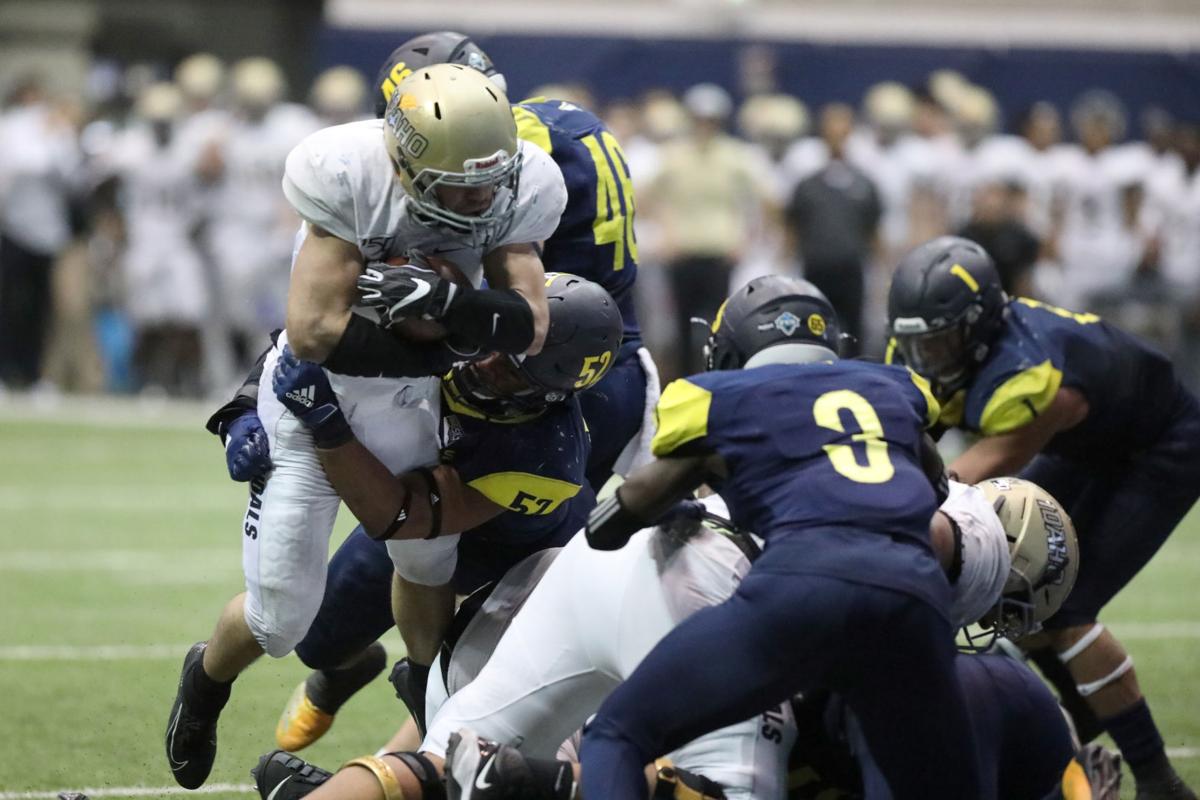 Idaho quarterback Mason Petrino (throwing) set career marks, completing 35 of his 42 passes for 491 yards and six touchdowns. He ran for 65 yards and a score as well in his final game as a Vandal.

Instantaneously, he lofted his sixth touchdown pass of the day, this one into the falling arms of Nick Romano. That play boosted the UI football team to an unprecedented 738 yards, the second most in program history.

It was the antithesis of the Vandals’ season, at odds with the themes surrounding it — an offense that’d labored in finding much mojo, and a defense that’d typically shouldered the team.

Naturally, the latter wanted in on the credit too.

Vandal defenders Tre Walker and Jonah Kim made up for all the production their unit had allowed, and stuffed NAU star quarterback Case Cookus on a fourth-down carry at the 2-yard line to hand Idaho a wild, 60-53 overtime win at Walkup Skydome in its season finale.

But it was Petrino who concluded his controversy-ridden UI career in the best way possible — with a career-day, exhibiting only a pair of miscues, a whole lot of fluid offense and nervy throws, many of which were among his finest.

Against a Lumberjacks defense torn apart this year by injuries and departures, Petrino went 35-of-42 for 491 yards. His touchdown passes tied a single-game program record. He added 65 yards and a rushing score.

“That’s a way to go out, for sure,” Petrino said. “We were just clicking on all cylinders.”

Added his father, seventh-year UI coach Paul Petrino, whose team finished 5-7 overall and 3-5 in the Big Sky: “We’ve had a lot tough times. ... But when he can look at that, that’s always the last game he played, that’s awesome.”

Mason Petrino’s favorite target, senior receiver Jeff Cotton, matched a single-game program mark with 17 catches. He racked up 223 yards and two scores. He hit his preseason goal of finishing with more than 1,000 yards (1,134).

Cotton’s second score, a 70-yarder down the seams, opened an Idaho possession late in the third after NAU had reclaimed a 36-31 lead.

“It was something special,” said Cotton, an Arizona native whose family was in attendance to watch him blitzkrieg the Jacks’ depleted secondary from all angles. “Just give it everything I’ve got for this last game.”

With six minutes left in regulation, NAU (4-8, 2-6) forced Mason Petrino into a goal-line fumble, which the Jacks recovered. Cookus marched his team promptly downfield on a 52-yard pass, ensuing in a 50-46 lead procured on a short run.

Petrino and Co. were left with four minutes.

“When I fumbled down on the goal line, that’s when I knew I had to come back and win this game, help my teammates,” Mason Petrino said.

Like it’d done seven times before, UI’s offense responded. Petrino found Cotton for a tip-toe grab on third down, then legged it for another first-down pickup on third down a minute later.

On another third down with 44 seconds left, Petrino escaped a collapsing pocket, then flicked the ball to Romano on the far sideline. Romano jetted 29 yards and in, untouched.

The Jacks, behind their All-American quarterback, then set up their all-star kicker, Luis Aguilar, with multiple clutch plays — a 35-yard Joe Logan run (of his 220 total yards, four TDs) and a 19-yard scamper by Cookus, in particular.

UI’s defense held NAU off on the goal line, prompting a short field goal by Aguilar that sent it into overtime.

“Not really,” Paul Petrino said when asked if the barnburner’s staggering nature surprised him. “Their quarterback’s a stud. And I felt, with our O-line back and Jeff Cotton (who was injured last week), we could move the ball too.

“I don’t know if I thought it’d be that much, but I did think it’d be a high offensive game.”

UI punted only twice and NAU four times. Neither could really afford a stalled series — both rarely stumbled, with each going for about 8 yards per play and amassing too many highlights to count.

Paul and Mason Petrino heavily credited an offensive line playing at full health for just the third time this year.

“When those five were together, part of the Weber, Eastern (Washington) game and this one, we were really hard to stop,” Mason Petrino said. “All the props go to them.”

Cookus went 29-of-51 for 450 yards and three touchdowns, and three of his receivers had 80-plus yards.

Romano, a workhorse from every offensive standpoint, totaled 252 yards from scrimmage and three scores in replacing late-scratch Aundre Carter. With No. 2 receiver Cutrell Haywood injured, freshman tight end Hayden Hatten moved outside, and logged two short touchdowns, with his second — a slant and spin-move from 8 yards out — giving UI its first lead at 31-30 seven minutes into the third.

“It was just a bunch of guys coming together the last game and fighting for each other,” the quarterback said. “Every group did its part.”

To a minor extent, the defense did as well, providing a stop or two more than NAU’s. Its first hold in a handful of drives — a three-and-out late in the third — allowed Idaho to fashion a 46-36 edge at the close of the quarter, in which it outscored the Jacks by 16.

“Defense didn’t play maybe as well as they had all year, but they made the plays when they had to,” said Paul Petrino, whose Vandals finish sixth in the league.

Especially that play in overtime, with season-ending morale and historic offensive outputs from a couple of seniors on the line.

“We talked about it all week — ‘Let’s send (the seniors) out that way,’” Paul Petrino said. “Gosh dang it, they just played their hearts out.”

 Idaho senior quarterback MASON PETRINO had easily the best game of his career, passing for 491 yards and six touchdowns on an 83.3 percent completion rate. He chipped in 65 yards and a score on the ground to end his controversial career with the brightest of outings.

 UI freshman running back NICK ROMANO had career-highs of 252 yards and three touchdowns from scrimmage, including a backpedaling, falling 25-yard score to open overtime.

UI’s three-minute drive at the end of the fourth quarter might’ve left NAU time to tie it, but it was the type of series the Vandals have erred on this season. Petrino converted three clutch third downs. On the final one, he broke out of a crumbling pocket, darted left, and found Romano alone. Romano zoomed 29 yards down the sideline for a score to make it 53-50.

The Vandals (5-7, 3-5 Big Sky) end their season sixth in the Big Sky Conference a year after posting finishing ninth with the same league mark.