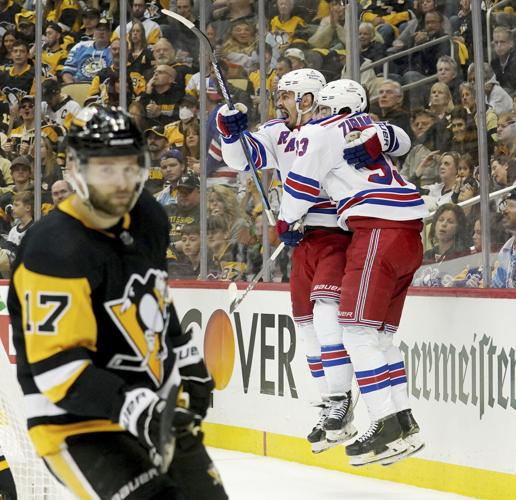 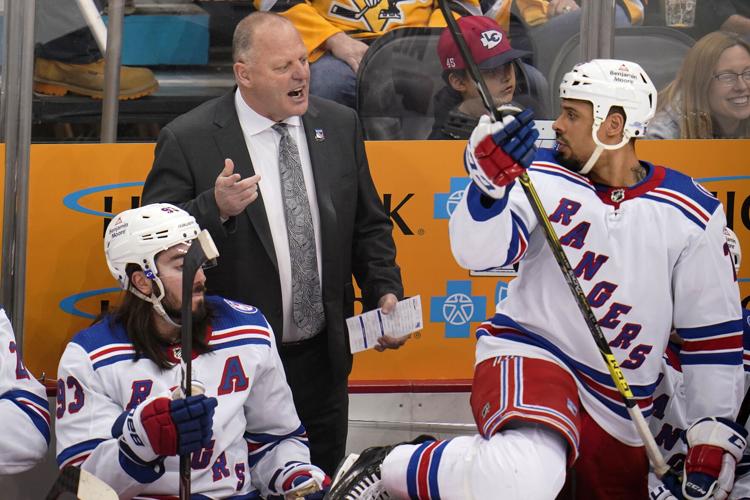 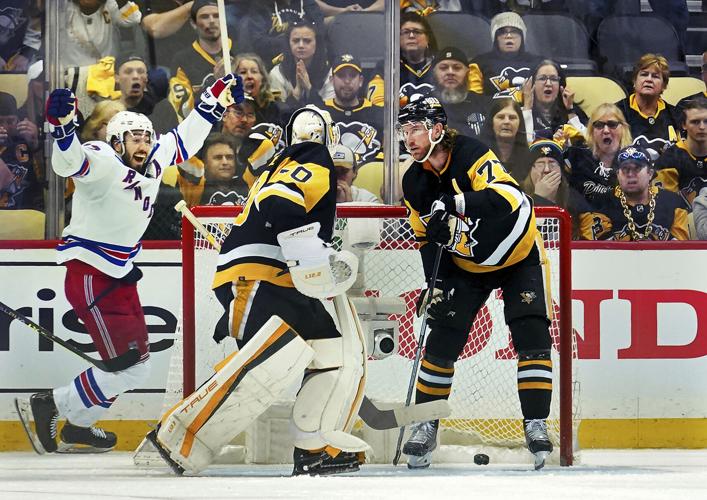 New York Rangers center Mika Zibanejad celebrates after scoring against Pittsburgh Penguins goaltender Louis Domingue during the third period of an NHL hockey game Friday, May 13, 2022, in Pittsburgh. The series is 3-3 after the Rangers won. (Matt Freed/Pittsburgh Post-Gazette via AP)

New York Rangers center Mika Zibanejad celebrates after scoring against Pittsburgh Penguins goaltender Louis Domingue during the third period of an NHL hockey game Friday, May 13, 2022, in Pittsburgh. The series is 3-3 after the Rangers won. (Matt Freed/Pittsburgh Post-Gazette via AP)

PITTSBURGH — Chris Kreider’s long slap shot bounced over Louis Domingue and into the net with 1:28 left and the New York Rangers beat the Pittsburgh Penguins 5-3 on Friday night to push their thrilling first-round series to a deciding Game 7.

Kreider’s second of the game and fourth of the playoffs sent the series back to New York. Andrew Copp added an empty netter for good measure in the waning seconds. Game 7 is Sunday at Madison Square Garden.

Mike Zibanejad had two goals and two assists and Adam Fox had four assists. Igor Shesterkin stopped 31 shots to win at PPG Paints Arena for the first time this series after getting chased by Pittsburgh in Games 3 and 4.

Pittsburgh played without captain Sidney Crosby, who sat out while dealing with an upper-body injury. His status going forward is uncertain.

WASHINGTON — Carter Verhaeghe scored 2:46 into overtime to send the Florida Panthers to the second round of the playoffs for the first time since they reached the Stanley Cup Final in 1996.

The Panthers will have home-ice advantage for their next series against either the cross-state rival Tampa Bay Lightning or the Toronto Maple Leafs.

Florida looked to be on the verge of a regulation victory when Gustav Forsling tripped Nicklas Backstrom with 1:09 left. T.J. Oshie scored 6 seconds into the Washington power play to send the sellout crowd of over 18,000 into a frenzy.

Trade-deadline acquisition Claude Giroux and captain Aleksander Barkov scored in the third period to put the Panthers ahead. Ryan Lomberg scored Florida’s first goal, tying it 2:29 after Nic Dowd got the Capitals on the board. Nicklas Backstrom gave Washington a 2-1 lead early in the third period.

DALLAS — Miro Heiskanen scored the go-ahead goal late in the second period for and Dallas recovered after blowing an early two-goal lead to force a deciding Game 7 in their first-round Western Conference series.

Mikael Backlund and Michael Stone scored for Calgary, which tied the score 2-2 with 8:01 left in the second. Jacob Markstrom also had 36 saves.

The series wraps up Sunday night in Calgary, where the Flames last hosted a Game 7 in 2006 and lost their first-round series to Anaheim.