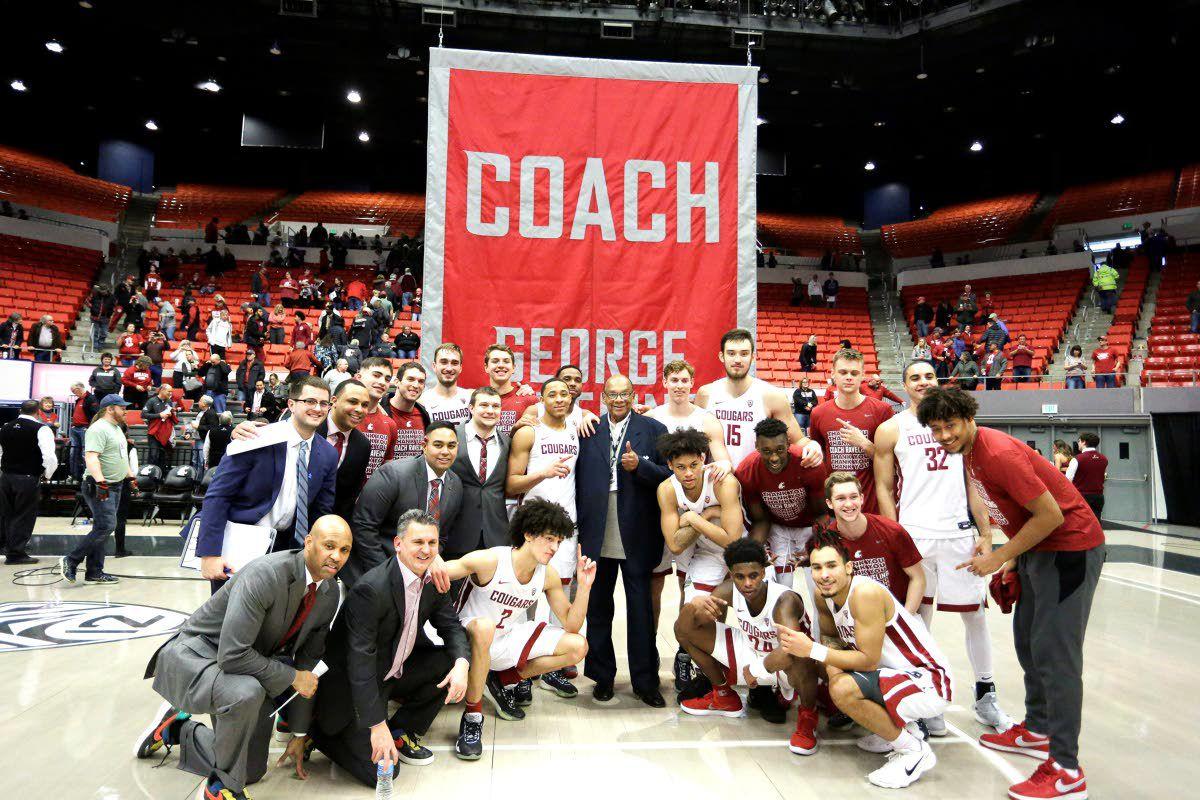 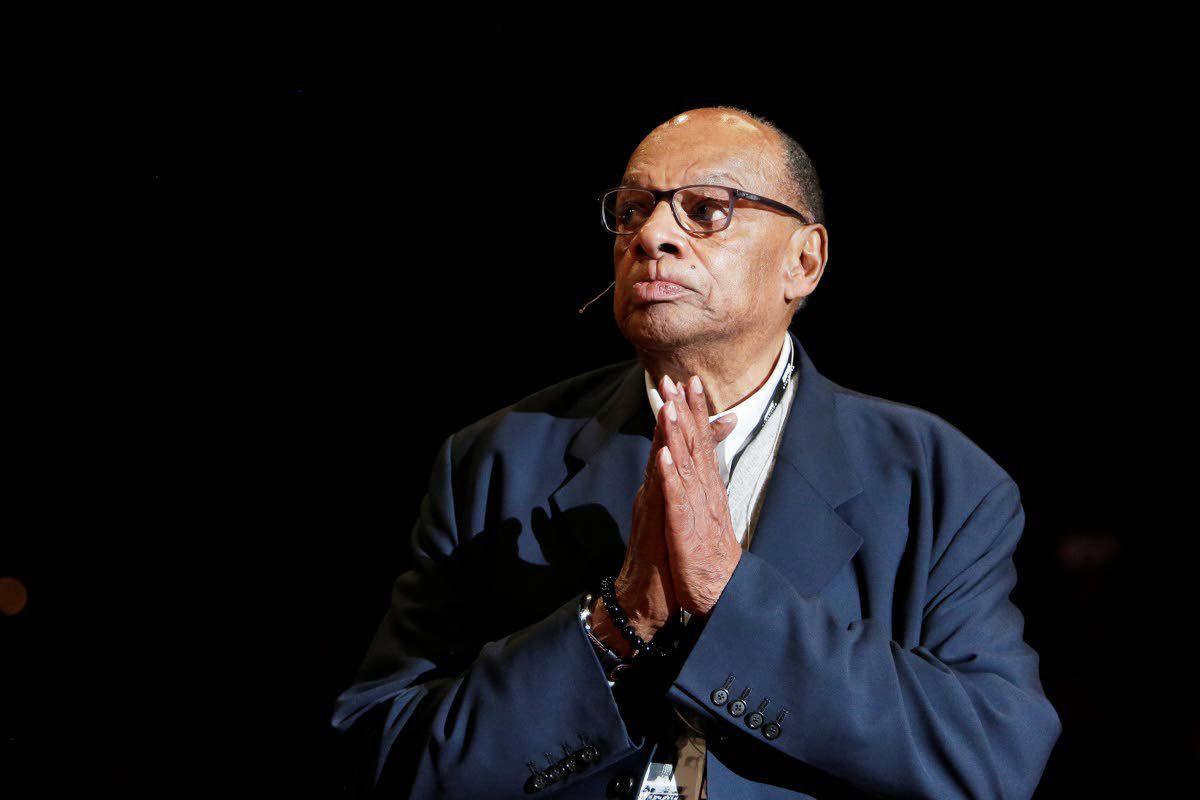 Former Washington State basketball head coach George Raveling looks on during the school’s ceremony to honor him during halftime of a game between WSU and Washington on Sunday at Beasley Coliseum. 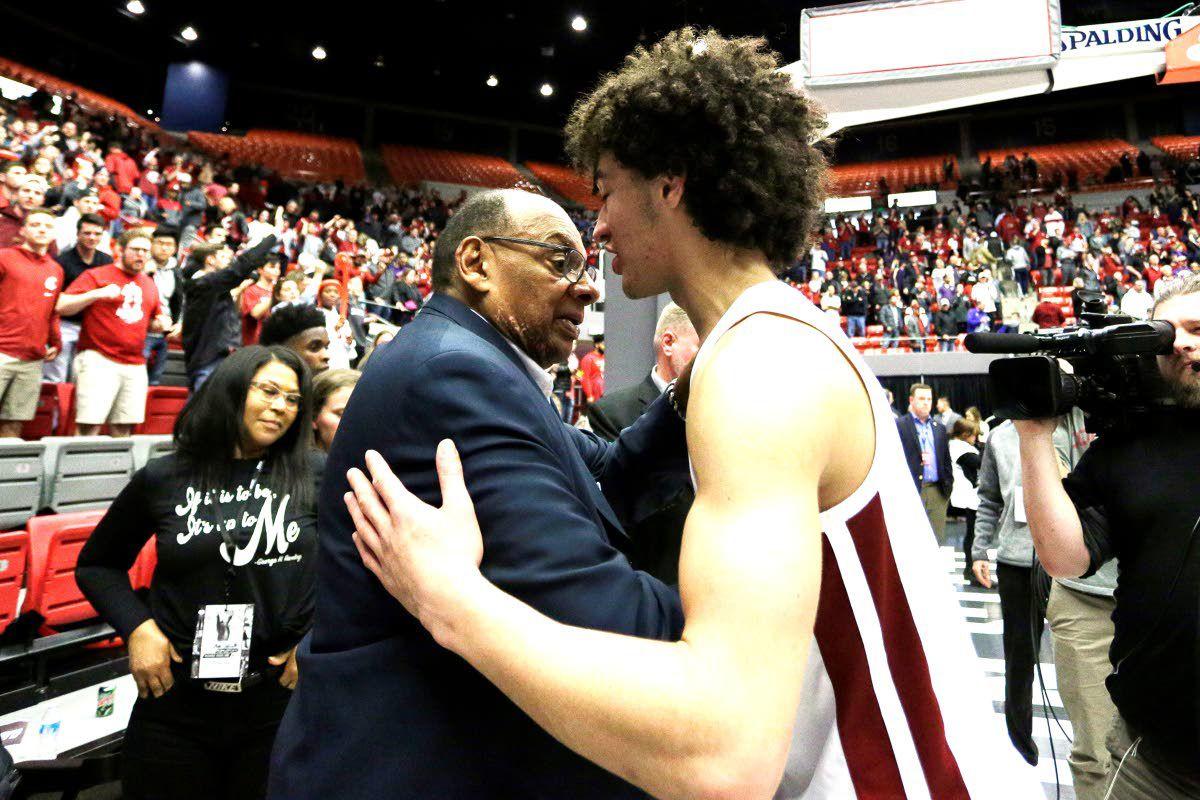 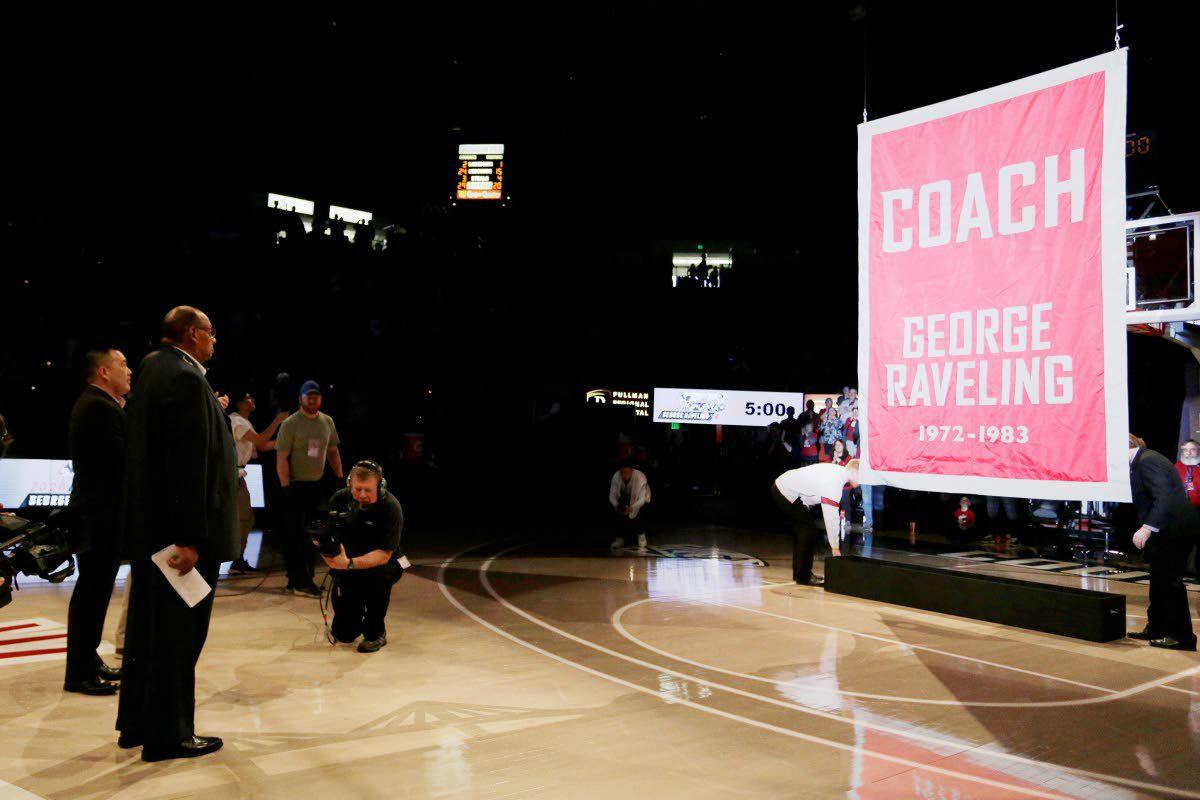 Former Washington State basketball head coach George Raveling, second from the left, watches a banner with his name on it rise to the rafters during the school's ceremony to honor him during halftime of an NCAA college basketball game against Washington in Pullman, Wash., Sunday, Feb. 9, 2020. (AP Photo/Young Kwak) 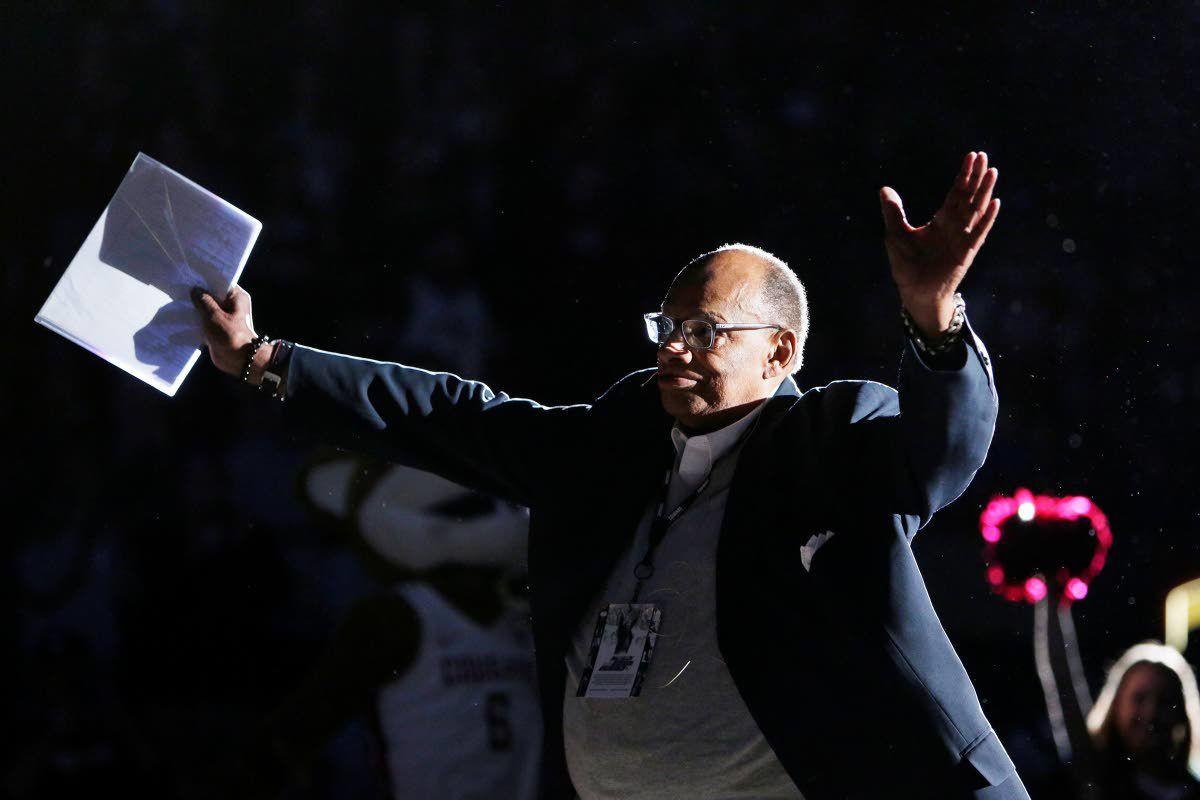 Former Washington State basketball head coach George Raveling looks on during the school’s ceremony to honor him during halftime of a game between WSU and Washington on Sunday at Beasley Coliseum.

Former Washington State basketball head coach George Raveling, second from the left, watches a banner with his name on it rise to the rafters during the school's ceremony to honor him during halftime of an NCAA college basketball game against Washington in Pullman, Wash., Sunday, Feb. 9, 2020. (AP Photo/Young Kwak)

George Raveling, like he’d done so routinely during his coaching tenure at Washington State in the 1970s and ’80s, stood on the Cougar sideline with his hands raised, his fingers signaling to the spectators that it was time to get loud.

The near-5,000 in attendance for WSU’s Apple Cup game against Washington burst out with gratitude for the man who had put the Cougars on the map.

And Wazzu, like it’d done under Raveling so many times, won a big game.

Raveling, a celebrated figure in Wazzu’s long basketball history who is often regarded as one of its best-ever coaches (from 1972-83), had his name lifted to the rafters Sunday. Before, he spoke with appreciation toward a community, school and state he still cherishes.

“It was a marriage made in heaven,” said the 82-year-old Raveling.

In closing, with tears forming in his eyes, he said, “I appreciate you guys taking a chance on me.”

Coming out of school at Villanova, Raveling didn’t anticipate his path. But former ’Nova coach Jack Kraft “wouldn’t give up,” and finally convinced him to be an assistant with the Wildcats from 1963-69.

“I never in my life dreamed of being a coach,” Raveling said. “Next thing I know, I’m hooked. Then, in 1972, I came out here. I couldn’t believe it. Today, it would never happen. An athletic director or president would never take the chance that they took on me. I’d never been a head coach in my life.”

Raveling, now a Naismith Hall of Famer, became the Atlantic Coast Conference’s first black coach when he was hired as an assistant at Syracuse in 1969. He blazed the same trail for the Pac-8 Conference about three years later, but now, he was the head man.

“You were a great influence to a generation of black coaches,” Houston coach Kelvin Sampson said in a recording. Sampson was WSU’s coach from 1987-94.

Over 11 years as the captivating boss of the Cougs, Raveling compiled a 167-136 record, expanded WSU’s recruiting potential, established the nationally known Cougar Cage Camp for youths and always got a healthy draw at home games.

He led the school to two NCAA tournament showings, breaking a 39-year drought, and coached such standouts as Craig Ehlo, Steve Puidokas, Don Collins, James Donaldson and Guy Williams — whose son, Noah, is a WSU freshman.

Raveling’s name will now be sandwiched on a banner between those of Puidokas and Klay Thompson, who was given the same honor about three weeks ago.

“I tried to not just be their coach, but to be their adopted dad,” Raveling said of his players, many of whom spoke on the big board during breaks. “It’s become a cliche now to say that we’re a family. We were a family before people started bragging about it.”

Said Ehlo in a recorded interview: “You mean the world to me.”

WSU players were inspired by Raveling’s visit and the ceremony honoring him. Raveling spoke from the heart to the team Saturday, and told the Cougs “It’s about character development, being connected,” WSU coach Kyle Smith recalled.

“Honestly, it’s a blessing to have him here,” said Noah Williams. “It was way bigger than basketball. You don’t get a lot of chances to meet somebody who stood next to Martin Luther King at his ‘I Have a Dream’ speech (the typewritten pages of which Raveling owns).”

Added CJ Elleby: “For him to be here in the building, and for him to have lived such a great life, you know, and have such an impact on others, it’s just special to me, because I got to be a part of it.”

The former global marketing director for Nike, who grew up in Washington D.C., followed his Cougar career with stints at Iowa and USC. He assisted on the 1984 Team USA Olympics squad that won gold. Seven years ago, he was given a Lifetime Achievement Award by the Basketball Hall of Fame because of his contributions to the sport.

Yet during his speech to the Beasley crowd, Raveling wondered why he’d ever departed the Palouse.

“The question is frequently asked of me: George, how did you live in Pullman for 11 years?’” he said. “As I look back now in reflection, people are asking me the wrong question. ... They should ask me why I left.”

Raveling credited the WSU student body for being “the greatest in the country” during his time. He also wished there was enough room on his massive crimson banner for the names of all of those who surrounded him at WSU. He recited many names of former players, and gave a nod to past administrators, coaches and all-time Coug women’s basketball player Jeanne Eggart.

“Without them, there’s no banner going up,” he said. “I wish there was some way to inscribe all of their names.”

Afterward, he endorsed Smith, saying the first-year Cougs coach “could be the president (of the U.S.)” if only basketball coaches voted. A humbled Smith had paid his own tribute by coaching the Cougs to a win in honor of one of WSU’s most celebrated figures.

“I can tell you this,” Raveling said, “I loved every second, every minute, every hour, every day that I worked at this university.

“My 11 years at WSU were about learning and growing, changing and building, laughing and crying, doing and undoing, winning and losing. At Washington State, we never lost. We either won or we learned. But we never lost.”

On Sunday, to the tune of about 5,000 fans screaming at his prompting, he learned that the feeling’s mutual, and that he’ll never be forgotten in Pullman.