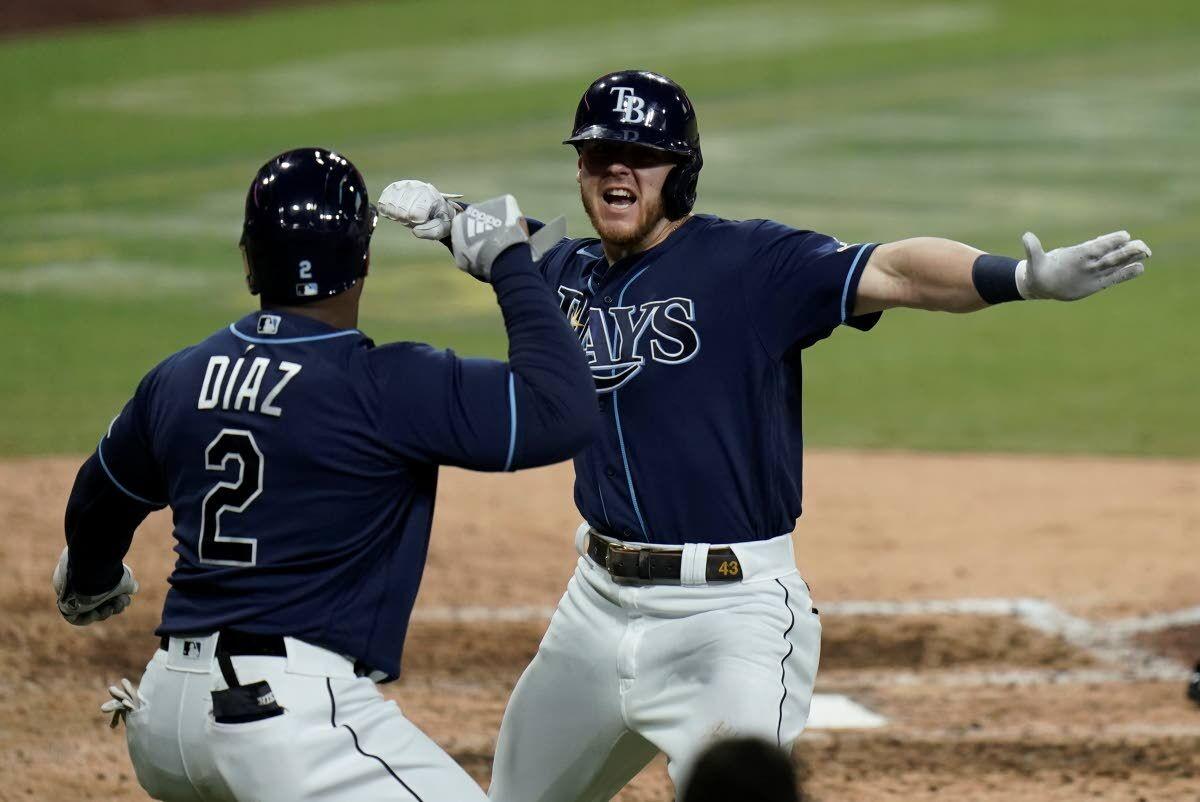 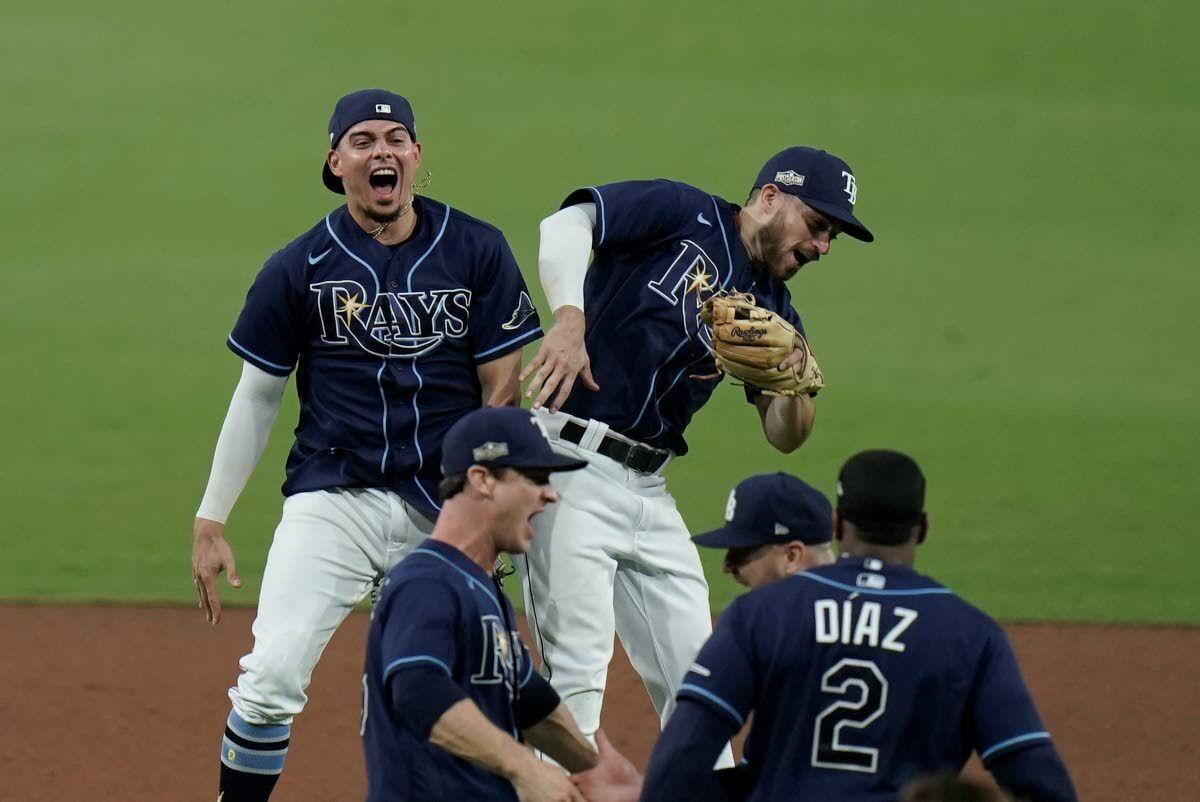 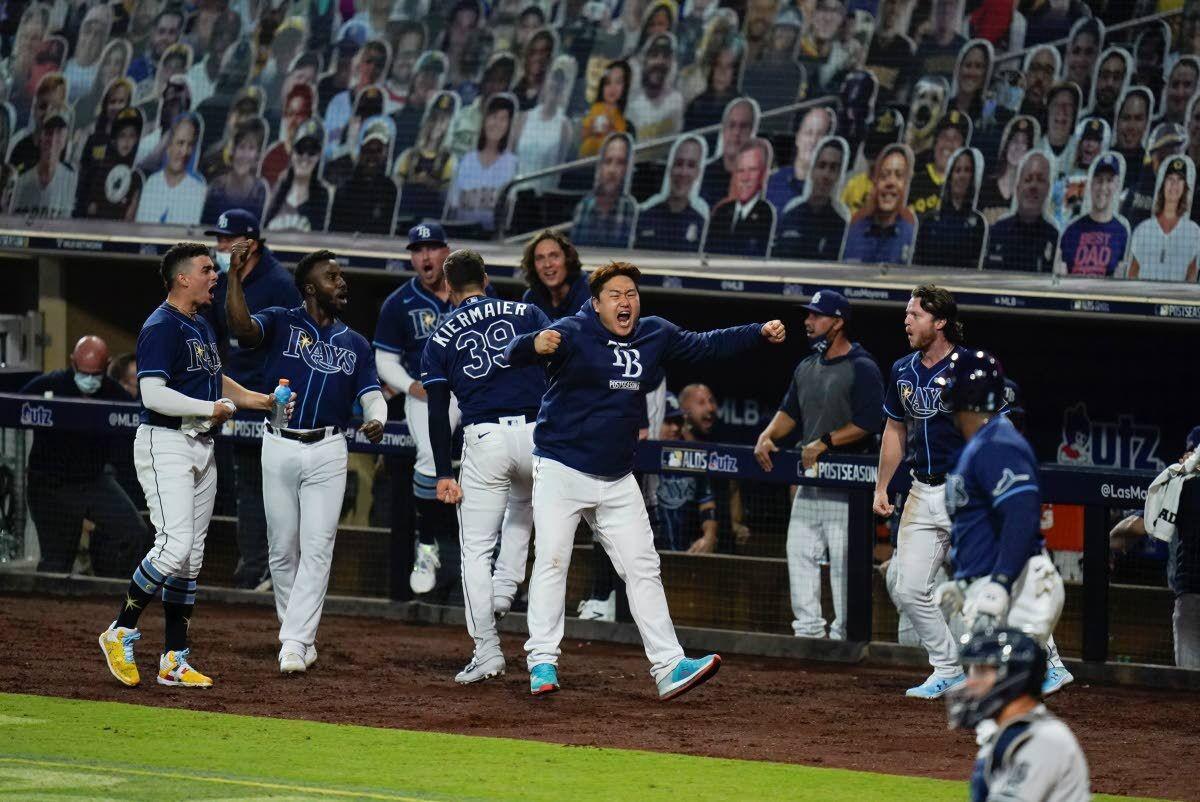 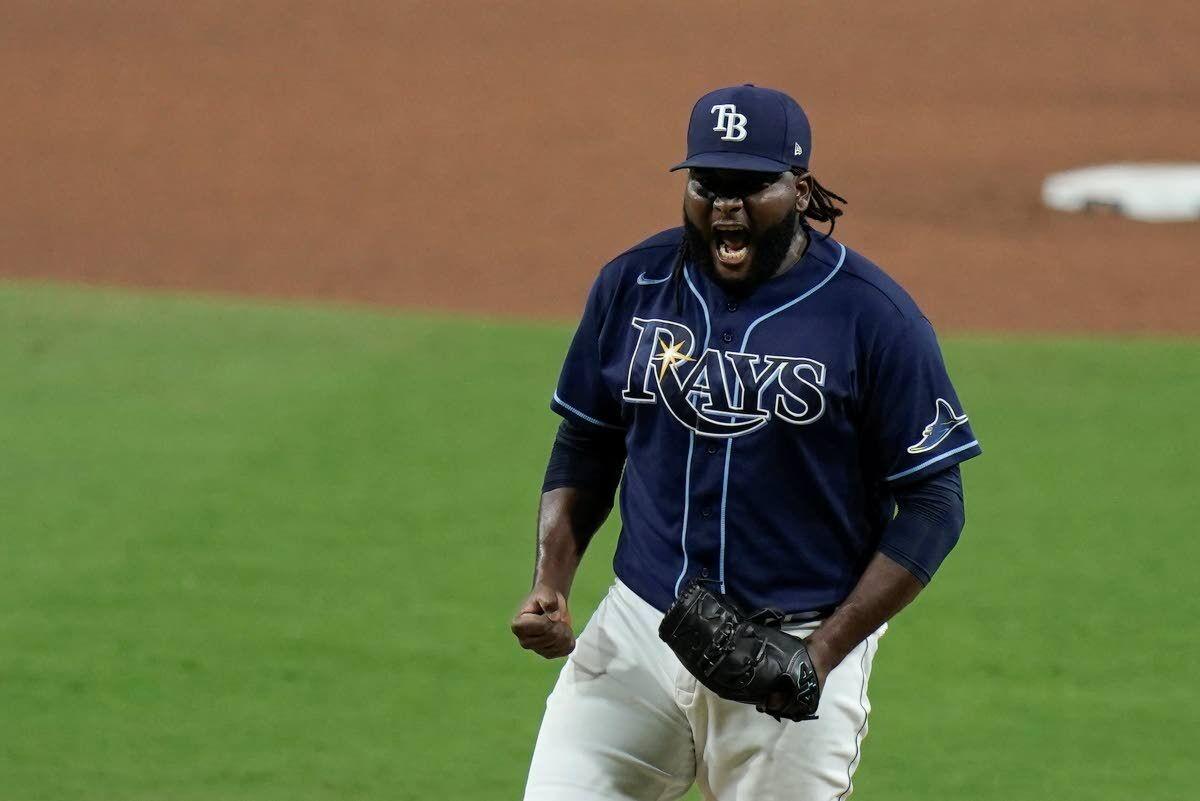 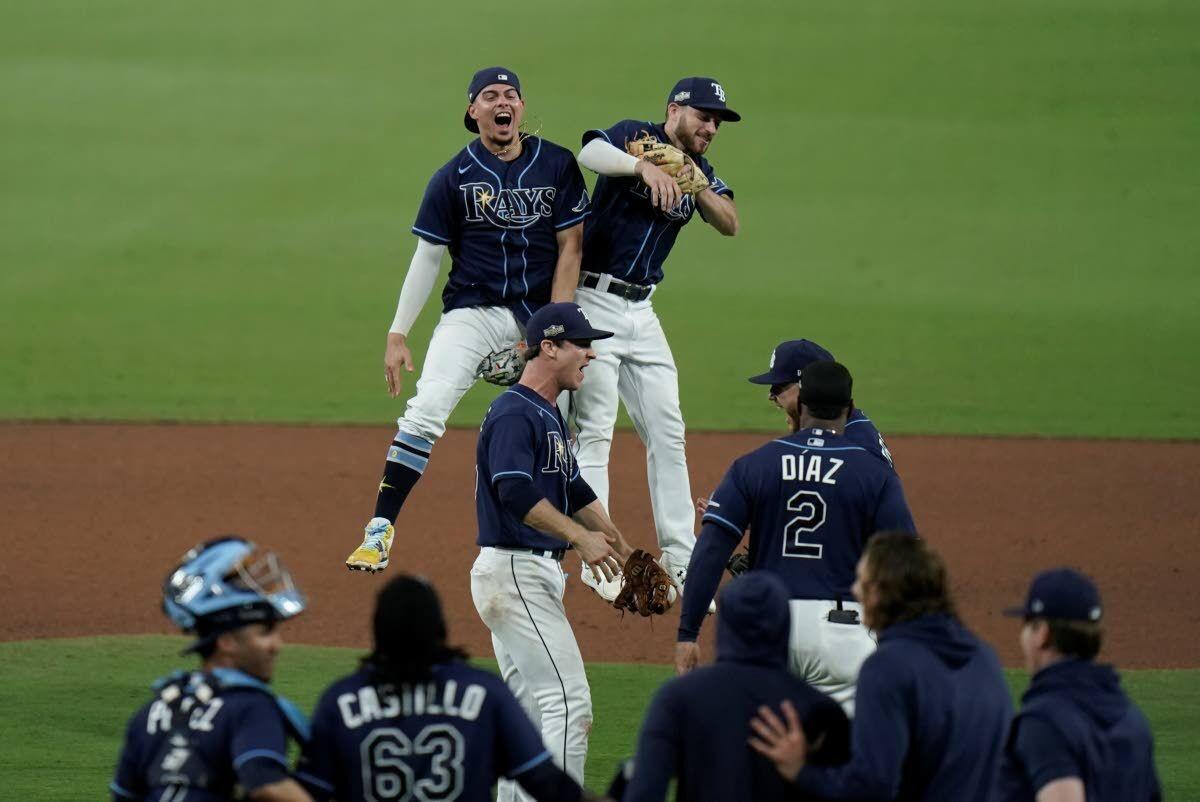 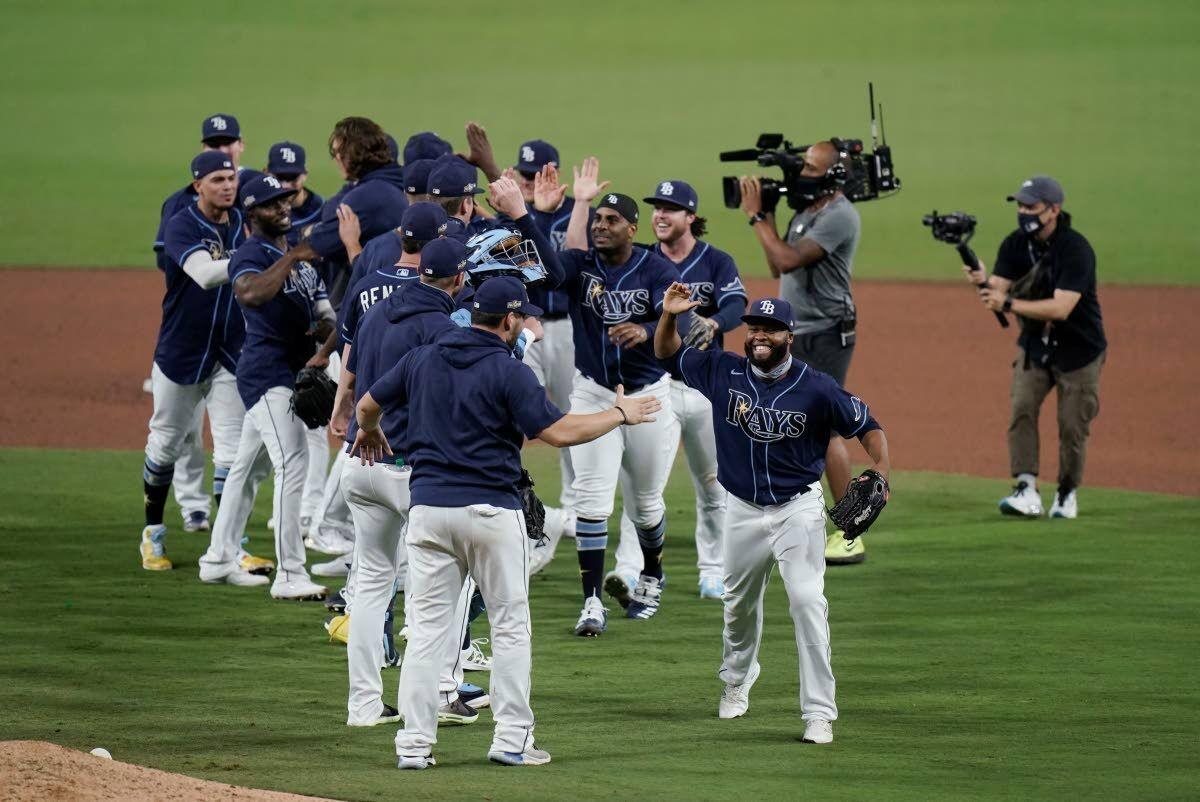 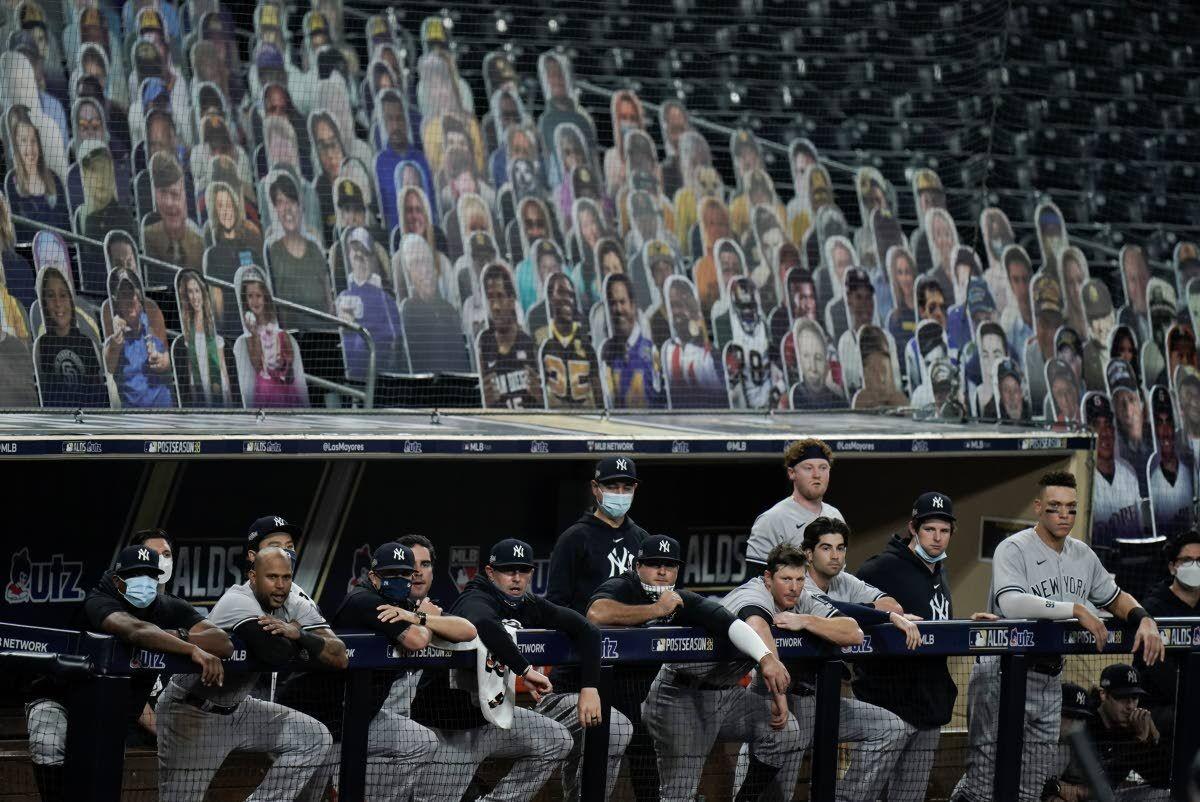 The New York Yankees look on during the ninth inning in Game 5 of a baseball American League Division Series against the Tampa Bay Rays, Friday, Oct. 9, 2020, in San Diego. (AP Photo/Jae C. Hong) 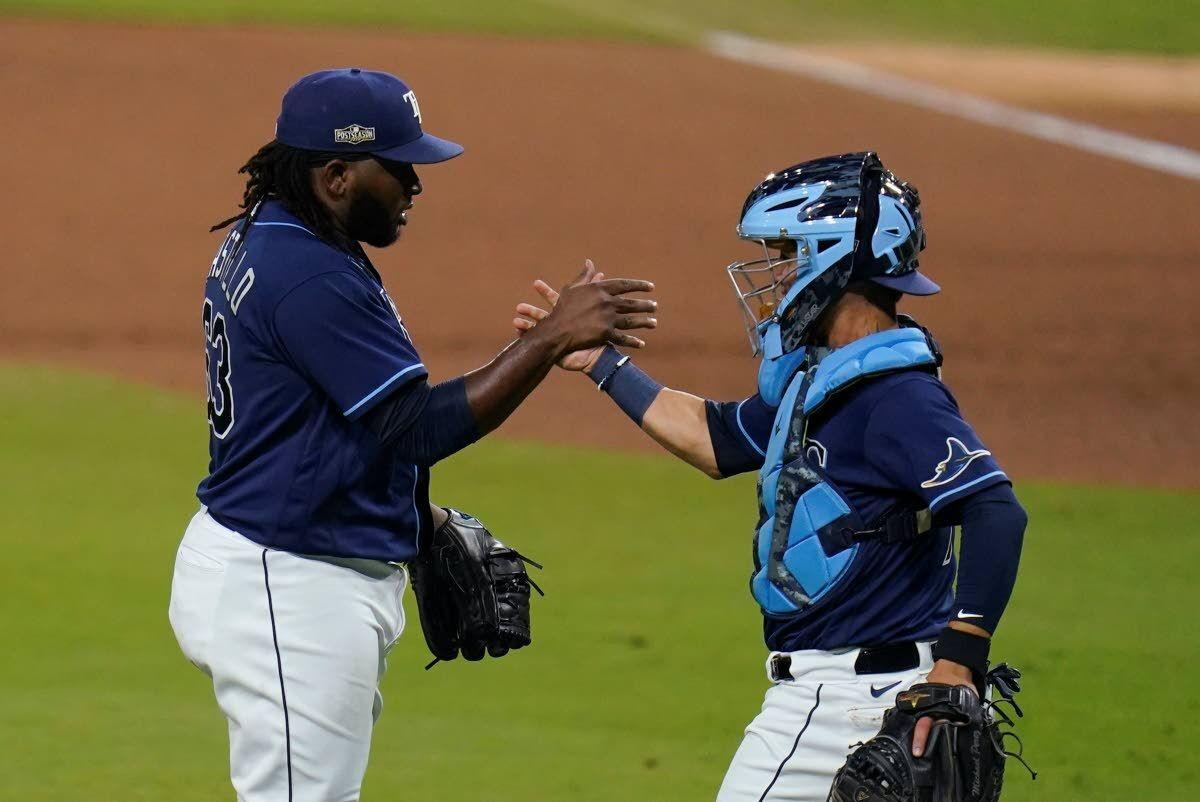 The New York Yankees look on during the ninth inning in Game 5 of a baseball American League Division Series against the Tampa Bay Rays, Friday, Oct. 9, 2020, in San Diego. (AP Photo/Jae C. Hong)

SAN DIEGO — Mike Brosseau homered off Aroldis Chapman with one out in the eighth inning and the Tampa Bay Rays beat the New York Yankees 2-1 Friday night to reach the AL Championship Series for the first time in 12 seasons.

The first career postseason homer for the 26-year-old utilityman came after a 10-pitch at-bat against the Yankees’ vaunted, hard-throwing closer, who entered the game in the seventh inning. Brosseau drove a 100 mph fastball into the left-field seats at Petco Park for just the third hit for the Rays.

Tampa Bay won the AL Division Series 3-2 and will stay in San Diego to face the Houston Astros in the AL Championship Series starting Sunday night. The Rays are in the ALCS for the first time since 2008, when they beat the Boston Red Sox in seven games before losing to the Philadelphia Phillies in the World Series.

Brosseau and Chapman have a history: Chapman threw a 101 mph fastball near Brosseau’s head Sept. 1 in the ninth inning of the Rays’ 5-3 victory. Chapman likely had nothing against Brosseau personally, but the pitch was an apparent escalation of a feud between the AL East rivals, and it prompted Tampa Bay manager Kevin Cash’s infamous declaration that he has “a whole damn stable full of guys that throw 98 miles an hour.”

“No revenge, We put that in the past,” Brosseau said. “We came here to win the series. We came here to move on, to do what we do best, that’s play our game.”

The Rays were eliminated by the Astros in the ALDS last year.

“They’ve been the team to beat the last few years,” Brosseau said. “They knocked us out last year so it will be fun to face them again.”

All-Star Austin Meadows also homered for the Rays, connecting off ace Gerrit Cole in the fifth. Aaron Judge tried to make a leaping catch but jammed his head into a padded overhang.

The Rays had 11 homers in the series and the Yankees 10.

Judged homered in the fourth. The Yankees also had only three hits.

Cole, starting on short rest for the first time in his major league career, struck out nine in 5 1/3 innings.

Winner Diego Castillo followed a hitless eighth with a 1-2-3 ninth, and the celebration was on for the Rays, who dominated the regular-season series against the Yankees 8-2. They took a 2-1 lead in the ALDS before the Yankees forced the deciding fifth game.

Cole, pitching about 100 miles south of where he grew up a Yankees fan in Newport Beach, held Tampa Bay to one hit and one run in 5 1/3 innings while striking out nine and walking two. After winning Game 1 on Monday night, he pitched on short rest for the first time in his major league career.

Cole had pitched 4 2/3 hitless, scoreless innings before Meadows homered to right field to tie the game at 1, and Cole reacted like he knew it was gone. Judge tried to make a leaping catch but the 6-foot-7 fielder jammed his head into a padded overhang. Even so, it probably would have taken a perfectly timed leap to make a catch.

It was Meadows’ second homer this series.

Cole left after 37-year-old left fielder Brett Gardner leaped to rob Randy Arozarena of a home run leading off the sixth. Arozarena, who homered in each of the first three games of the series, watched the ball while taking a few steps before Gardner made his sixth career homer-robbing catch. Cole pointed at Gardner in appreciation.

Cole showed emotion throughout his outing.

He struck out Meadows opening the first but then loaded the bases on two walks and a hit batter. Cole, who has never issued a bases-loaded walk in his big league career, punched out Joey Wendle to end the threat and then turned and hollered and stared at the Rays’ dugout.

Cole struck out the side in the second and then ended a 1-2-3 third by punching out Arozarena before hopping off the mound and jogging to the dugout.

After the fourth was extended by shortstop Gleyber Torres’ error, Cole struck out Willy Adames before pumping his right fist and spinning off the mound.

Judge homered into the right-field porch off Nick Anderson leading off the fourth. It was his second of the series and 10th for the Yankees. It was Judge’s third in a winner-take-all game, tying Bill Skowron, Didi Gregorius and Yogi Berra for the most in Yankees postseason history.

Rays starter Tyler Glasnow, who grew up just north of Los Angeles, started and went 2 1/3 hitless, scoreless innings, with two strikeouts and two walks. He struck out 10 in Game 2, a 7-4 Rays win.

Moments after he was relieved by Anderson with one out and one on in the third, Glasnow hollered and punched his fist in the air in the dugout after the Rays turned a double play.

By fanning Meadows opening the first, Cole became the fastest to 100 postseason strikeouts in 79 innings. The previous fastest was Clayton Kershaw of the Los Angeles Dodgers in 80 innings.

The Yankees wore a patch with 16 on their left sleeve in memory of Whitey Ford, the Hall of Fame pitcher who died Thursday night at 91. Additionally, there was a moment of silence before the national anthem for Ford, whose 236 wins are the most in Yankees history.