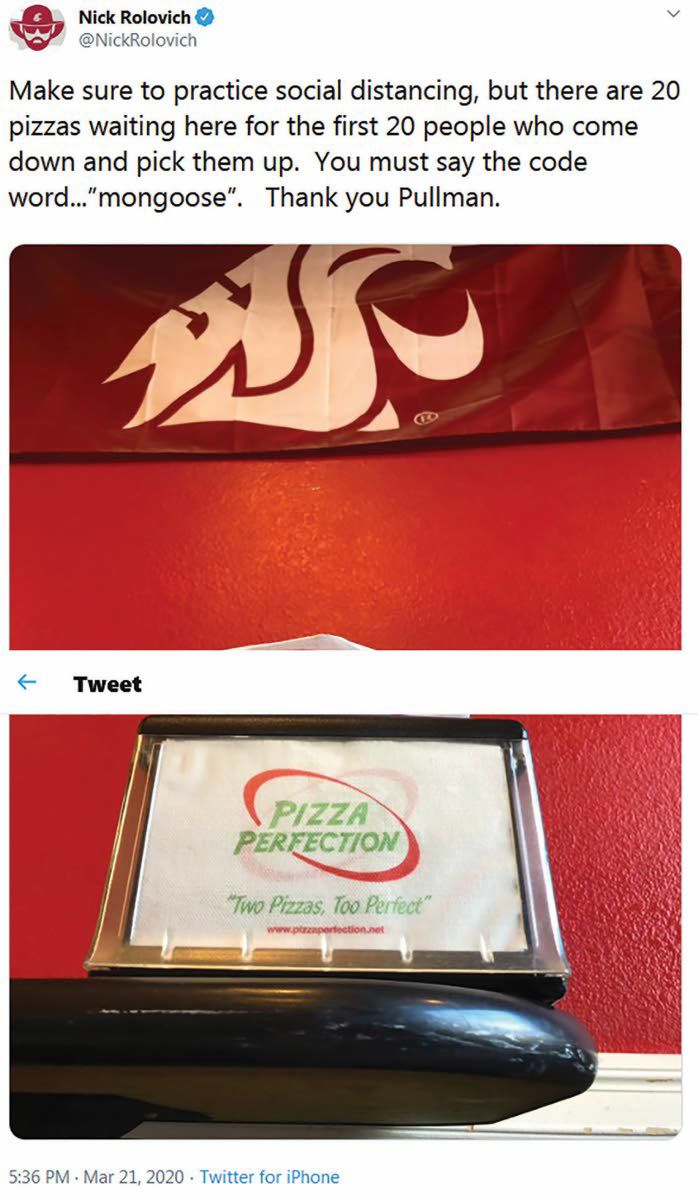 This screenshot taken from Washington State football coach Nick Rolovich’s Twitter account from Saturday promotes a deal going on at Pizza Perfection in Pullman. Rolovich has tried to connect with the WSU fan base by promoting social distancing and local restaurants while offering free meals to those who recite a code word.

So Washington State’s new football coach decided to bring them together, even while reminding everyone to observe social distancing in the midst of the coronavirus pandemic.

For four consecutive days, Nick Rolovich has chosen a Pullman restaurant, placed several orders, then announced on Twitter the first 20 people to arrive at the eatery and recite a “code word” would get a free takeout meal.

The idea had begun as the WSU football program’s in-house effort to support Pullman businesses at a difficult time for them. But Rolovich, on site at Pizza Perfection in Pullman on Saturday, saw a 2-for-1 deal he liked and hatched the idea of including the public in the scheme.

“Make sure to practice social distancing,” he tweeted, “but there are 20 pizzas waiting here for the first 20 people who come down and pick them up. You must say the code word, ‘mongoose.’ Thank you Pullman.”

Speaking with reporters in a teleconference Tuesday, Rolovich explained his thinking as, “Let’s see if some other people in town who are maybe struggling can get a little relief with the free pizza. Then it’s carried on the last couple days.”

Anointed on Sunday and Monday evenings were Nuevo Vallarta (code word: “Perico”) and Tan’s Chinese Restaurant (code word: “Honeycomb”). The fare was strictly takeout because of the state of Washington’s temporary ban on sit-down dining amid the virus outbreak.

Concerned that the original spirit of the giveaways could get lost, Rolovich said he wasn’t sure how long he would keep them up. For Tuesday’s version, he delivered free food to hospital workers on the night shift at Pullman Regional Hospital from Sella’s Calzone and Pizza Restaurant.

But the series of handouts was another example of Rolovich’s resolve to connect with fans and community members as he settles into his new job — especially with actual football out of the picture. Amidst continued global uncertainties about the extent of the coronavirus threat, WSU athletic director Pat Chun last week suggested “spring” football drills, which originally had been scheduled to begin Friday, could be delayed until June or July if not scrapped altogether.

With WSU having shifted recently from in-person classes to online learning because of the COVID-19 outbreak, Rolovich said the majority of his players remained at their permanent residences when spring vacation ended this week.

“We’re expecting (the assistant coaches) to talk to them every day,” he said, “mostly on the academic front. I don’t think there’s a whole lot of concern about the football side of it now. It’s really, ‘Can we get adjusted to this online learning?’ and ‘How are they doing in their own unique situation with their family or wherever they’re staying at this time?’”

Like other football coaches in recent weeks, he acknowledged concerns about players’ ability to prepare properly for a grueling season without considerable preseason training. But he also said repeatedly he’s focusing on the elements of his job he can control, including recruiting and developing relationships in his new home.

“I trust Pat Chun,” he said of the Cougar AD. “When he has some info for me, he’ll tell me and then we’ll start making a plan. But it’s been very unpredictable, it’s been very volatile, as far the decisions and the severity of what’s happening. I just think you rack your brain trying to figure out possible scenarios when you can be spending that time developing a relationship with a kid and his family that are going through something similar in their recruiting process.”

Hired in January shortly after predecessor Mike Leach took a job at Mississippi State, Rolovich has cast a high profile in Pullman and the Cougar fan milieu, not only through Twitter but by attending WSU athletic events before the virus shut the sports world down.

“I’m having a ton of fun, because I didn’t realize this place was wired like me so much until I got here,” said Rolovich, who grew up in the California Bay Area and spent the previous four years as Hawaii’s head coach.

“I see the passion of the fan base,” he said. “I’m sure there are some fan bases that have similar passion, as far as levels. But the goodness involved in the passion from the people around here, and the family values that are treasured as part of Coug Nation, is the part I had no idea about.”