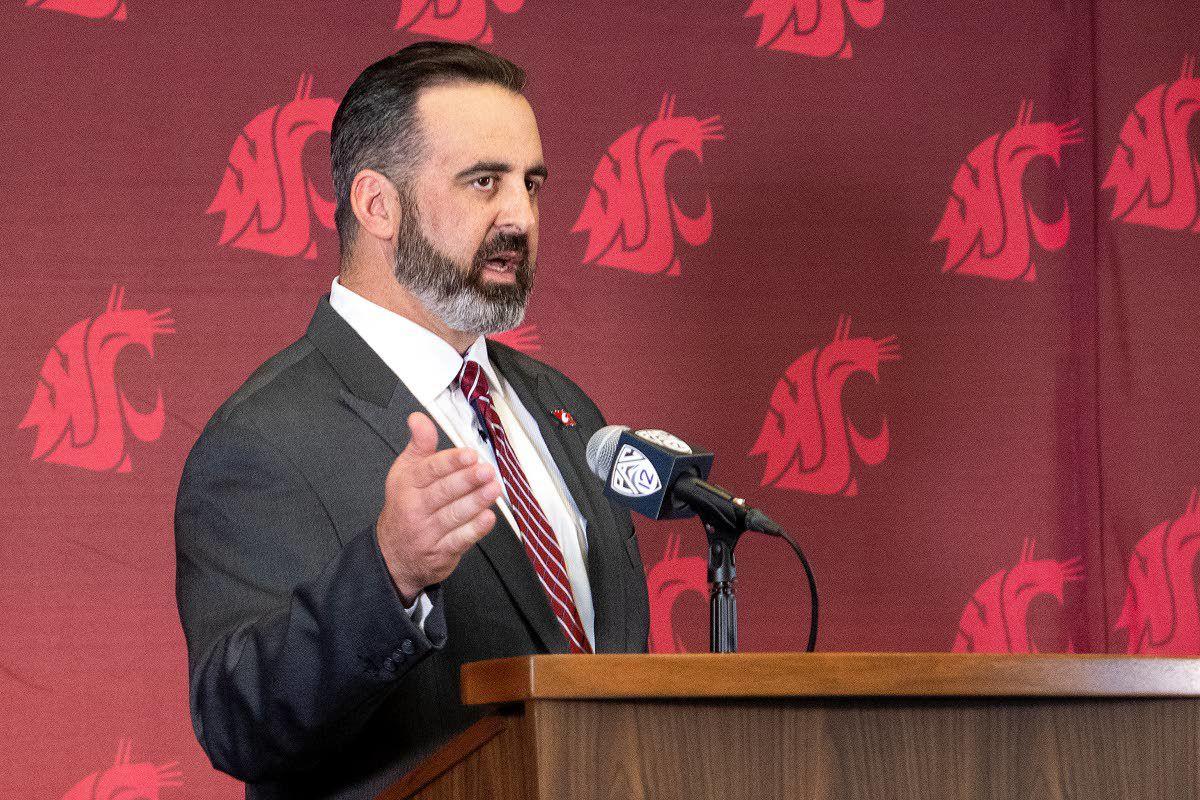 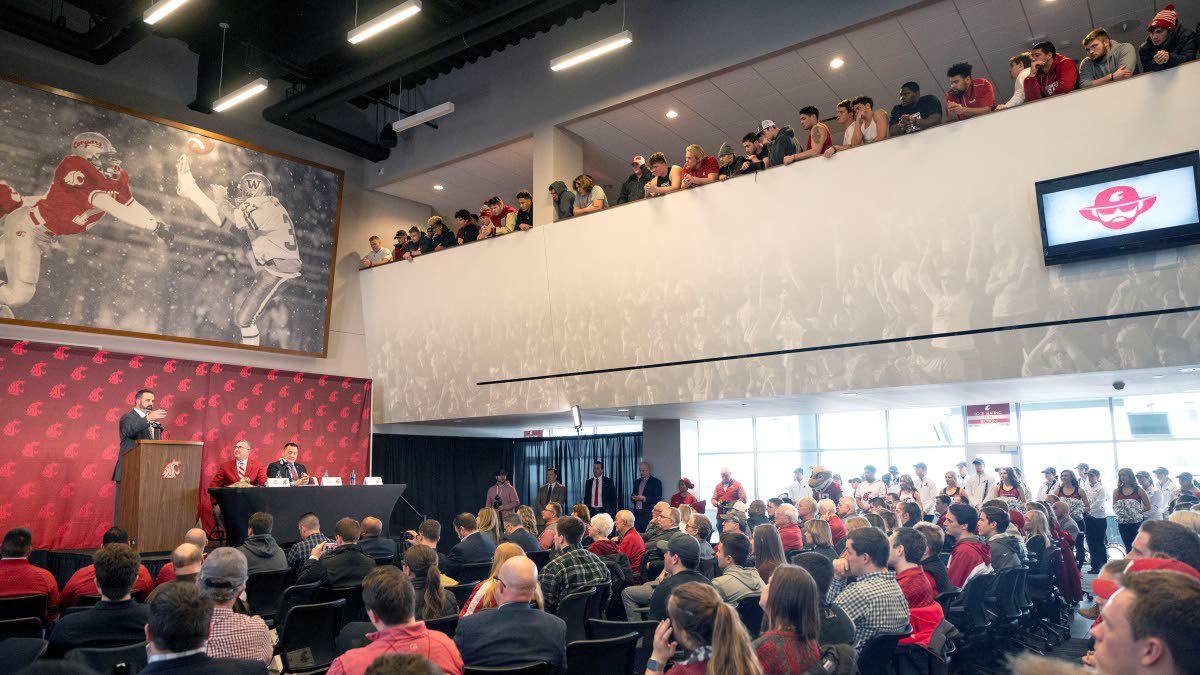 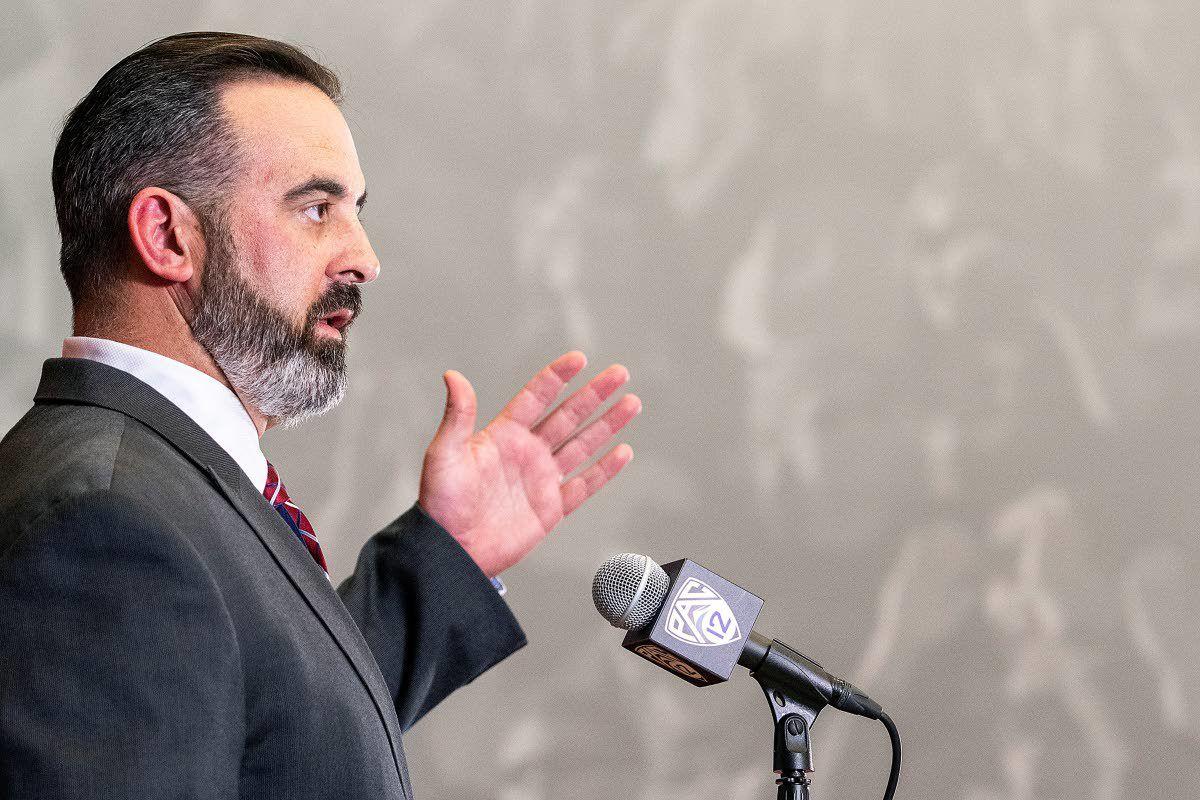 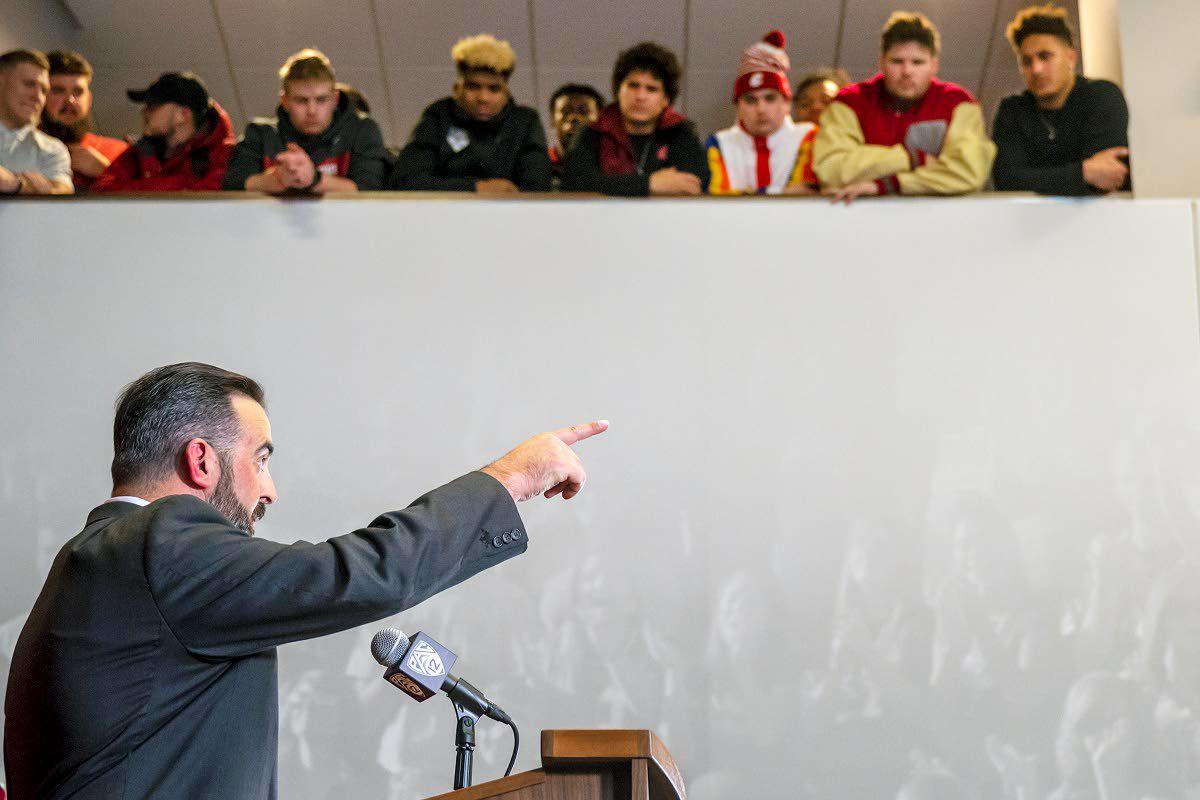 New Washington State head football coach Nick Rolovich points to the players standing on a balcony watching him speak during a press conference on Thursday afternoon in Pullman. 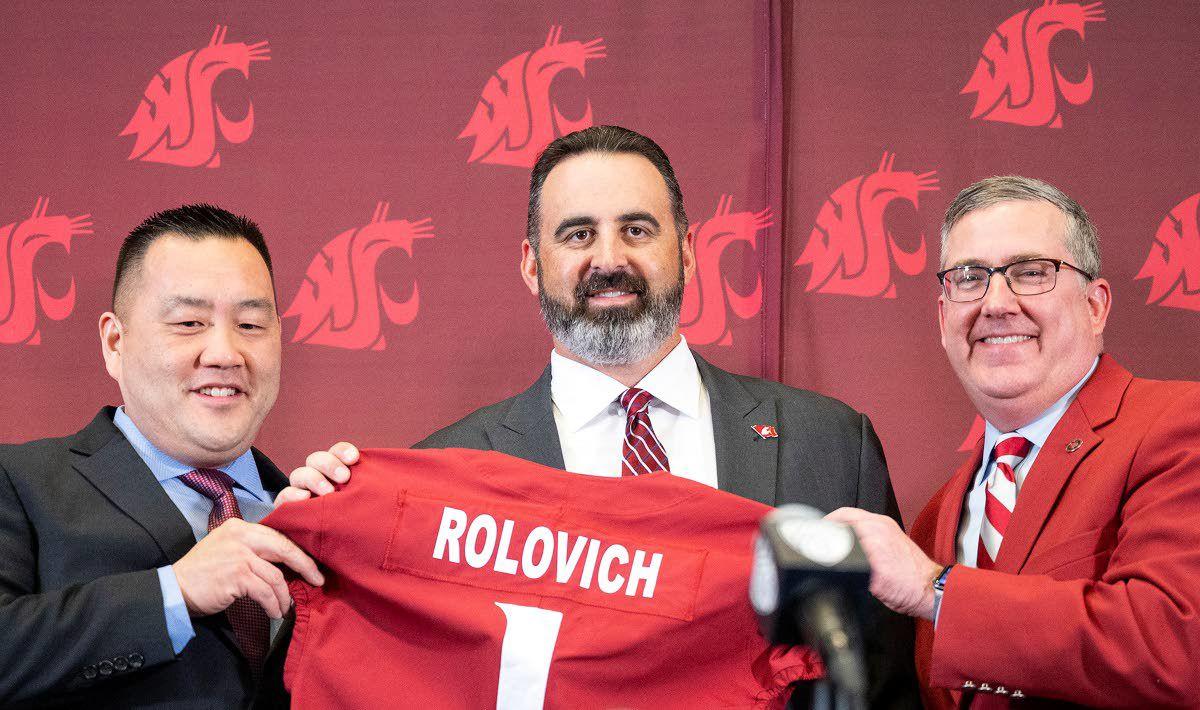 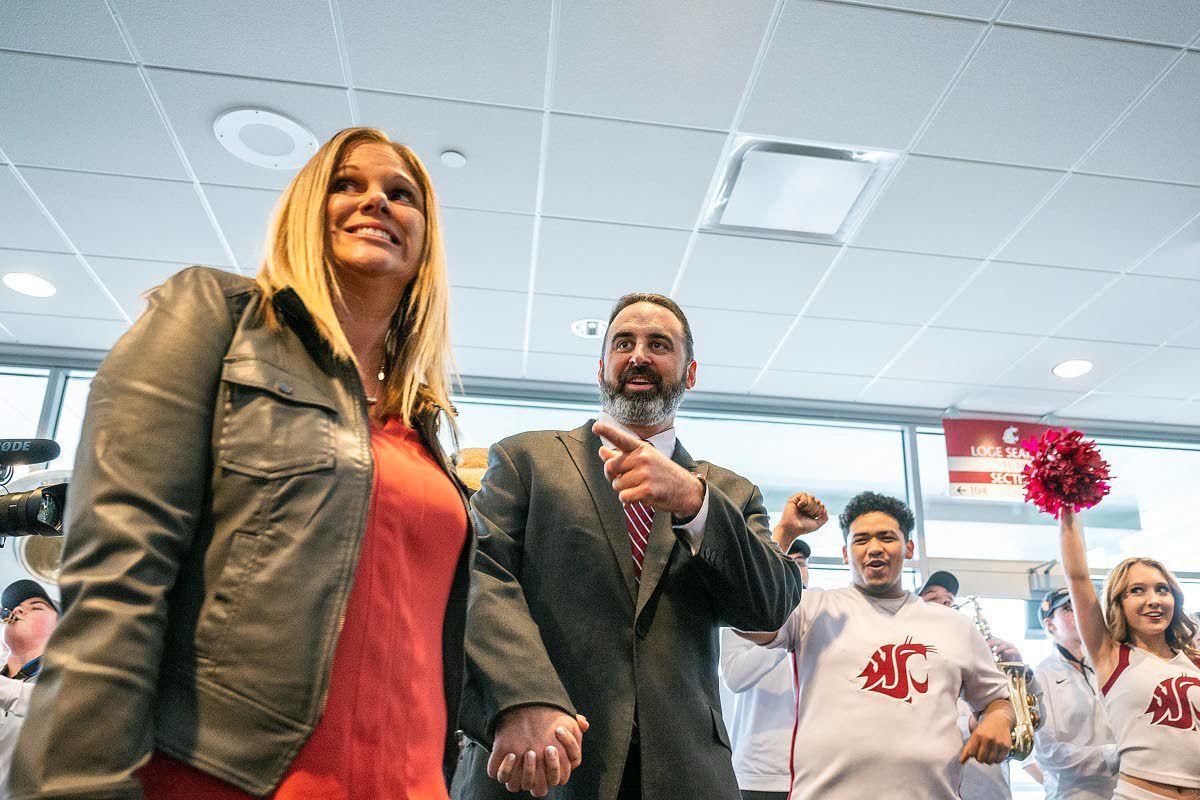 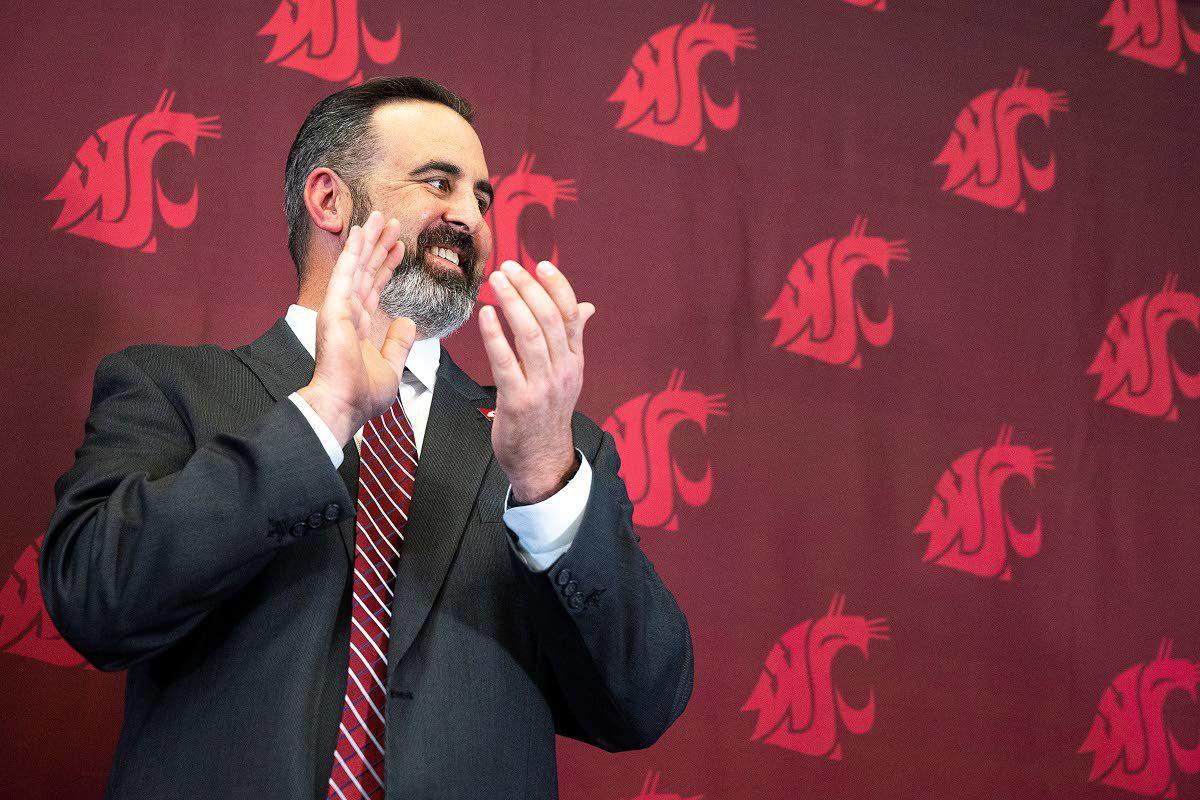 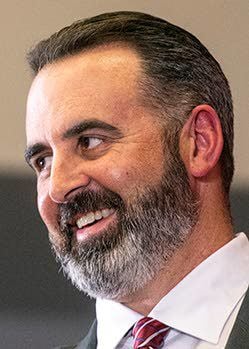 New Washington State head football coach Nick Rolovich points to the players standing on a balcony watching him speak during a press conference on Thursday afternoon in Pullman.

A Cougar football fan firmly took hold of the wireless microphone being passed around the room, then phrased his “question” in the most concise way possible.

Nick Rolovich thought a moment and answered in kind.

He paused briefly and explained.

“That’s the amount of days till we get to play it.”

Winning the Apple Cup, something the Cougars haven’t done since 2012, will be more challenging than knowing the exact date of the next edition. But considering Rolovich has no previous ties to Washington State, the many dozens of fans in the room appreciated his informed response Thursday as the school introduced its 33rd football coach in a news conference and meet-and-greet session in the Rankich Club Room at Martin Stadium.

Wearing a dark suit with a tie that came reasonably close to crimson and gray, “Rolo” sprinkled his 10-minute opening statement with several references to Cougar history and WSU trivia, sending a general message that a sense of community will be important in his program.

Wry and poker-faced behind a salt-and-pepper beard, Rolovich, 40, spoke in a staccato rhythm and alternated quick and carefully considered responses, giving the impression of someone who values spontaneity over polish.

He grew up in the California Bay Area, never has previously coached at the Power Five level, and has spent much of his playing and coaching career at the University of Hawaii, serving as the Warriors’ coach the past four years.

But he’d obviously done his research on Wazzu.

Admiring the spacious Club Room, he opened his statement by saying, “Imagine what William Goodyear would think of his home if he could see it now — it’s an amazing place.” That seemed to baffle the fans, most of whom are unfamiliar with the school’s first football coach, who held the job for one season, in 1894.

Rolovich thanked his wife, Analea, who was in attendance, and delivered individual messages to his four children in Honolulu. He made repeated references to the “WSU family.”

The fan’s reference to the Apple Cup drought notwithstanding, Rolovich made it clear the program doesn’t need rebuilding after the eight-year tenure of Mike Leach, who led the Cougars to a fifth consecutive bowl appearance in 2019 before jumping to Mississippi State on Jan. 9..

“I believe this — The Pirate left his treasure in Pullman,” the new coach said, invoking Leach’s famous nickname. “The X marks the spot here at Martin Stadium.”

Rolovich, who agreed to a five-year contract thought to be worth almost $3 million per year, confirmed his intention of installing a run-and-shoot offense, a pass-laden style he learned from June Jones as quarterback at Hawaii two decades ago and has since studied under Darrel “Mouse” Davis, considered the prime developer of the offense in the 1960s and 1970s.

“I’m going to ask Mouse if we can change it to the run-and-Coug — see how he likes that,” Rolovich said.

The Cougars are expecting a relatively smooth transition to the run-and-shoot from the Air Raid, which drew heavily from Davis’ concepts when Leach and Hal Mumme co-authored it three decades ago. As expected, Rolovich said he probably will use more running plays than Leach does.

Rolovich “has built his career the Coug way — grit, toughess, big heart, divergent thinking,” Chun said. “But most importantly, what struck us, he has a profound understanding of what it means to be a head football coach. He’s a leader of young men, he’s a mentor, he’s a teacher. He’s going to build a program that’s rooted in family, love and trust.”

Chun said he began conducting interviews for the job Sunday — all of them in Las Vegas, because of the ease with which candidates could come and go. He declined to go into further specifics about the search.

None of Leach’s assistants is expected to stay at WSU, and Rolovich is likely to draw partially from his Hawaii staff in replacing them. The Honolulu Star-Advertiser reported three Hawaii assistants — offensive coordinator Brian Smith, quarterbacks coach Craig Stutzmann and chief of staff Jason Cvercko — traveled to Pullman for the news conference, but their intentions are unknown and first two likely are candidates for UH’s top job.

Many Cougar players attended the news conference, and a number of them later described Rolovich as a “player’s coach,” noting he didn’t use that term himself but made it obvious his priorities lean that way. They were impressed by how he’d opened their first team meeting Tuesday, by declaring himself a newcomer who needed to earn a place in their regard.

Beyond a certain stoicism, his personality doesn’t seem to closely resemble that of Leach, but both coaches are considered quirky. Rolovich has been known to don wacky costumes for various occasions, not unlike former WSU coach Mike Price. School president Kirk Schulz said “a sense of humor” was one of the traits he’d been seeking in a coach.

“Nick was right at the top of our list from the very first,” Schulz said.

The atmosphere of the news conference was festive, just as it had been when Leach was hired in 2012. Mascot Butch the Cougar was on hand, and the marching band broke into the school fight song when Rolovich and Chun entered the room.

Rolovich didn’t appear to know the words. But he gave the impression he’d learn them soon.

His first season will feature seven home games, including Palouse rival Idaho, defending Pac-12 champion Oregon and hosting the Apple Cup, it was announced by the conference. Along with the Vandals, the other nonconference games will be at Utah State on Sept. 5 and a home date with Houston on Sept. 12.

Game times will be announced later this year.