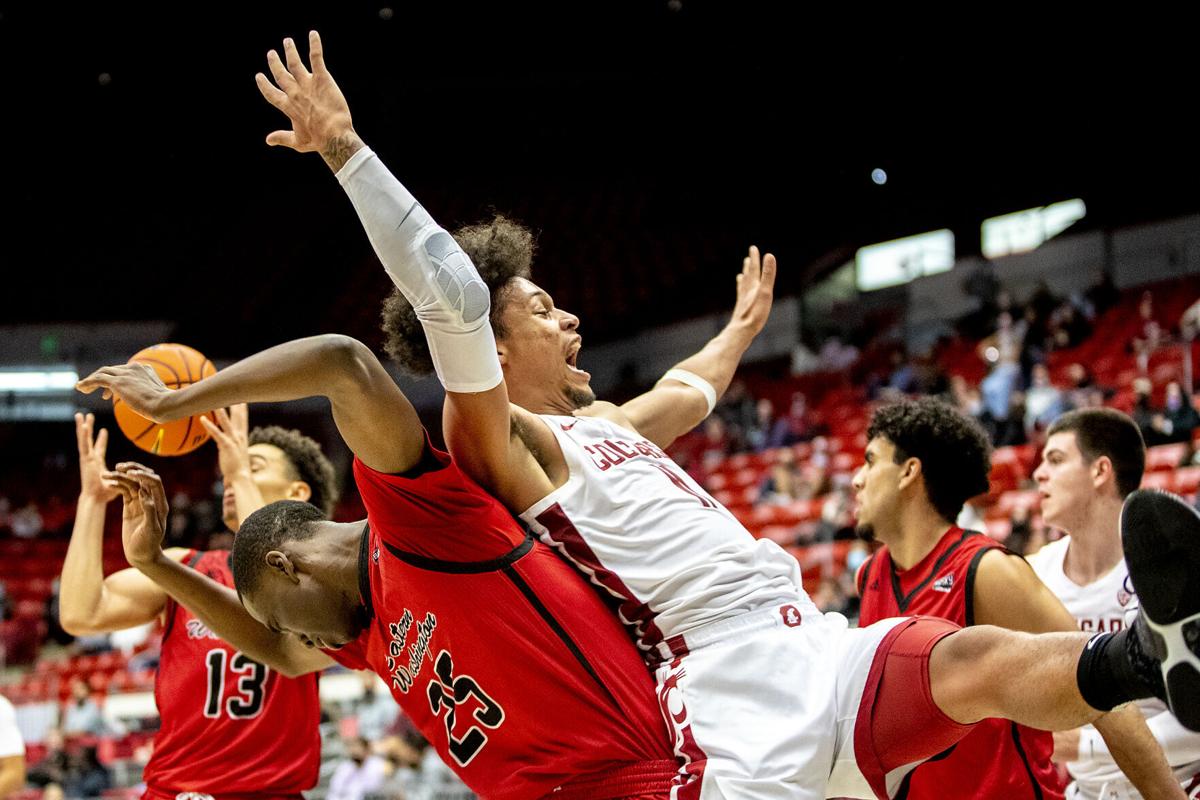 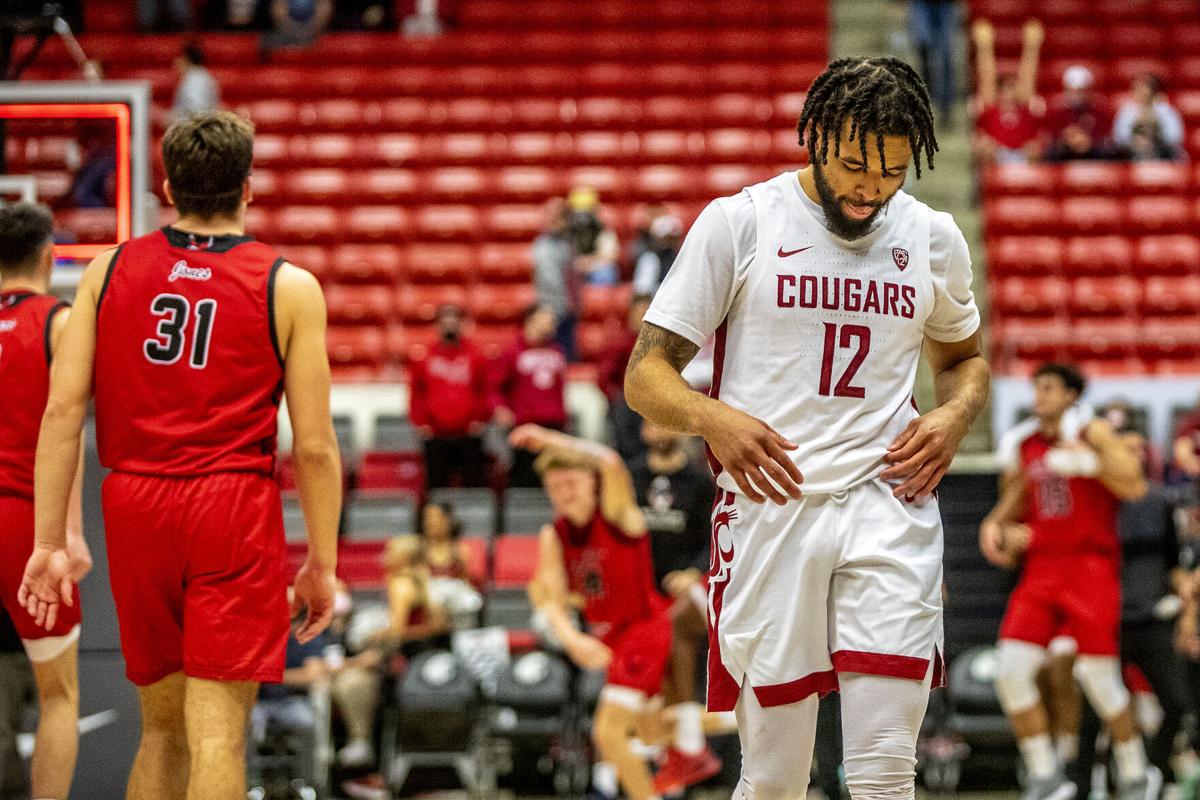 Washington State guard Michael Flowers, right, dejectedly walks back to the bench as Eastern Washington players celebrate behind him during Saturday’s nonconference game at Beasley Coliseum. 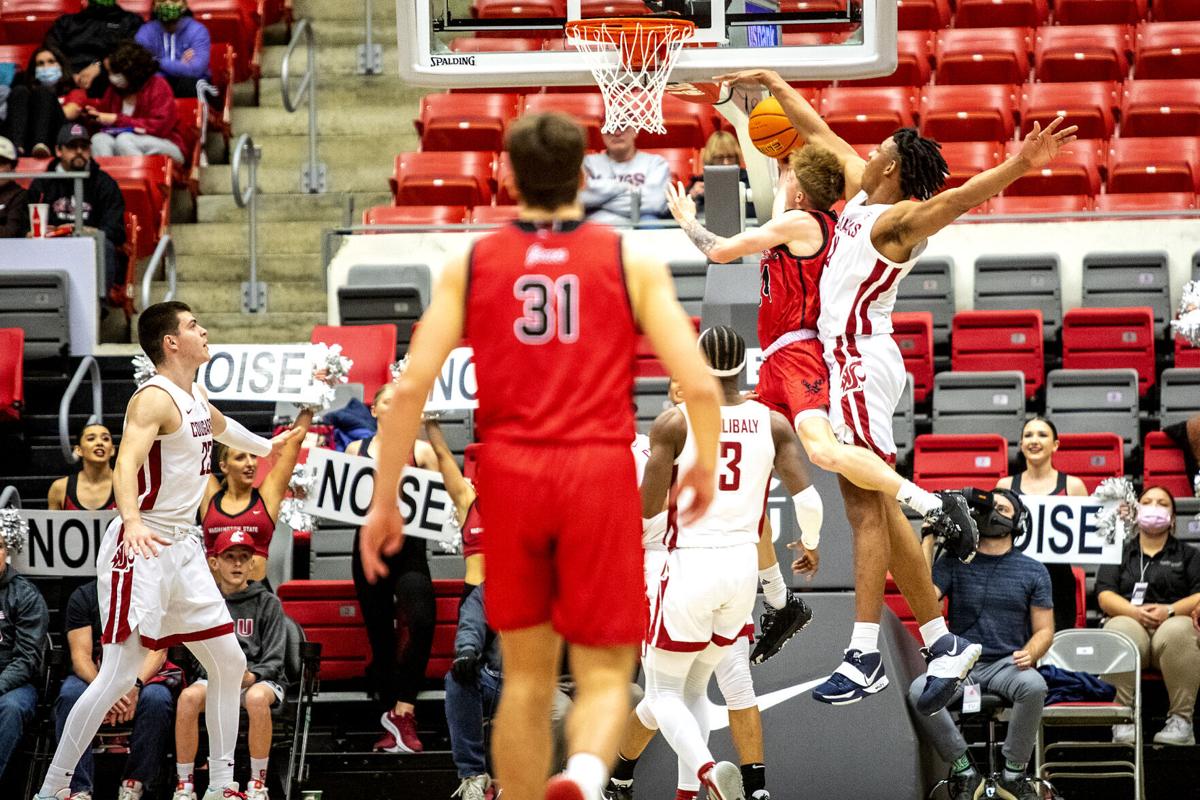 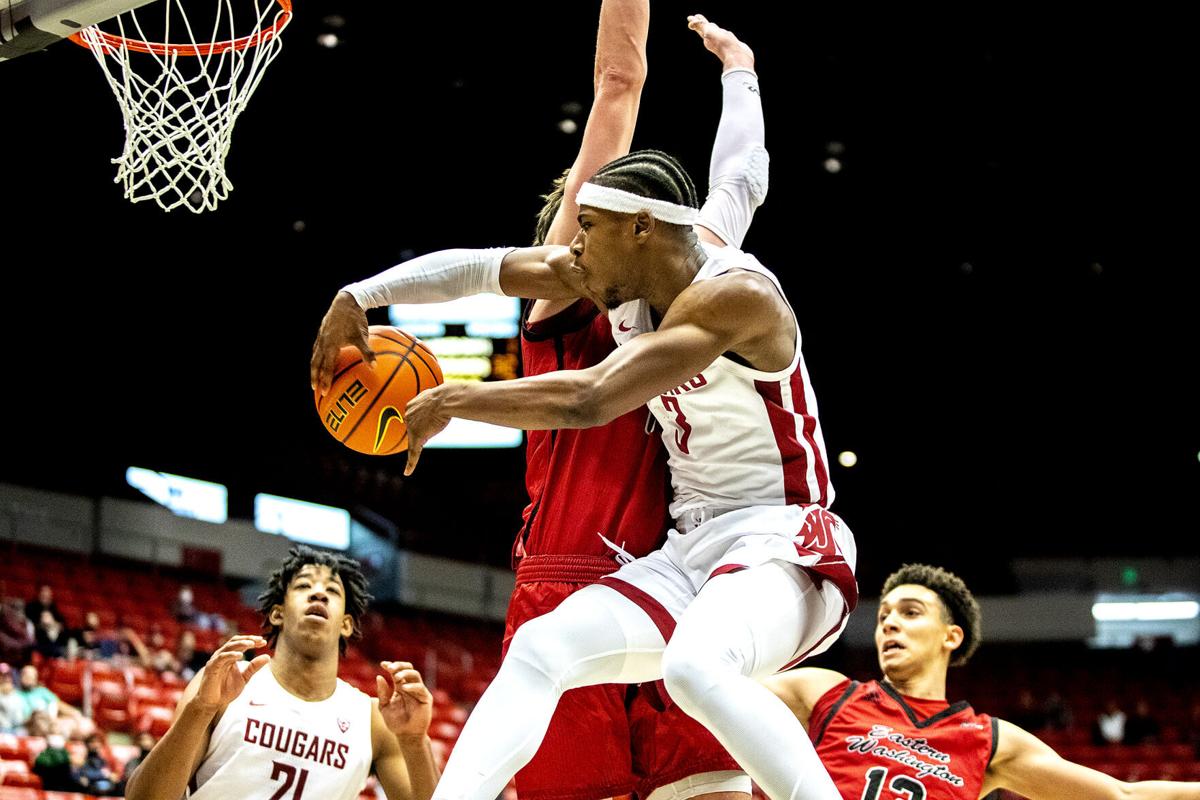 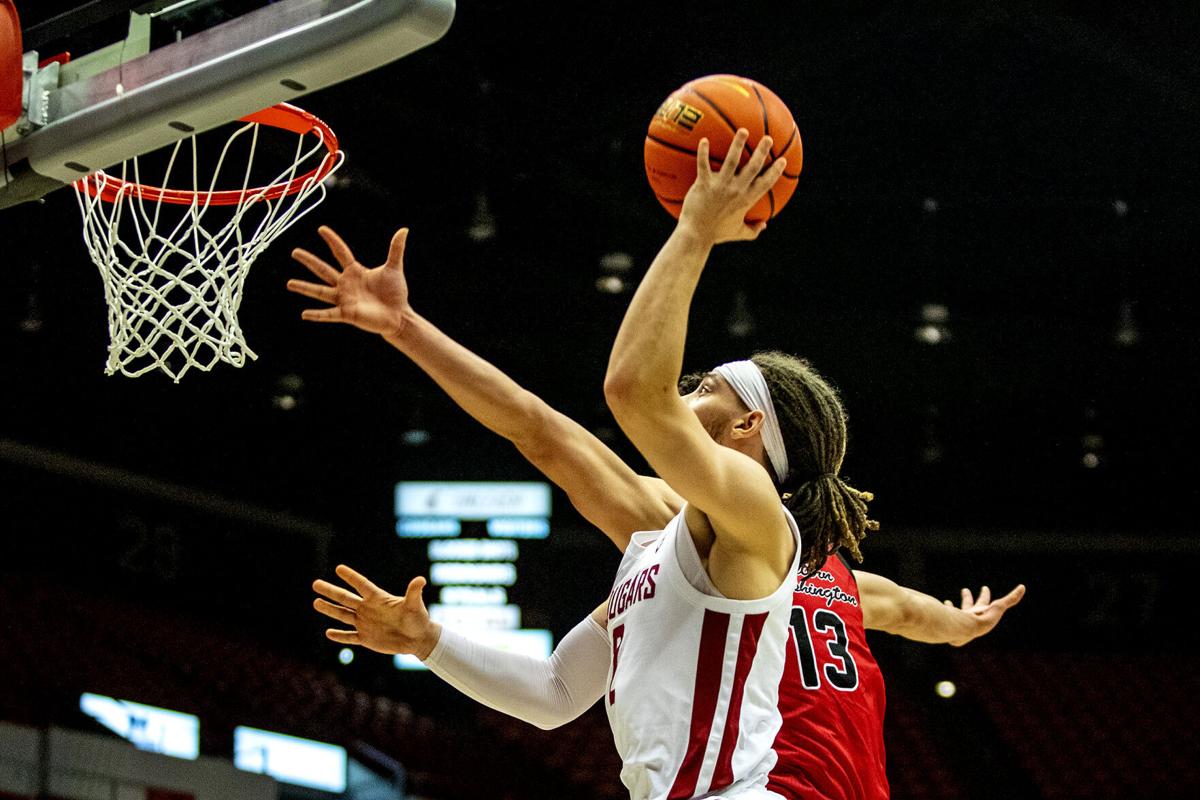 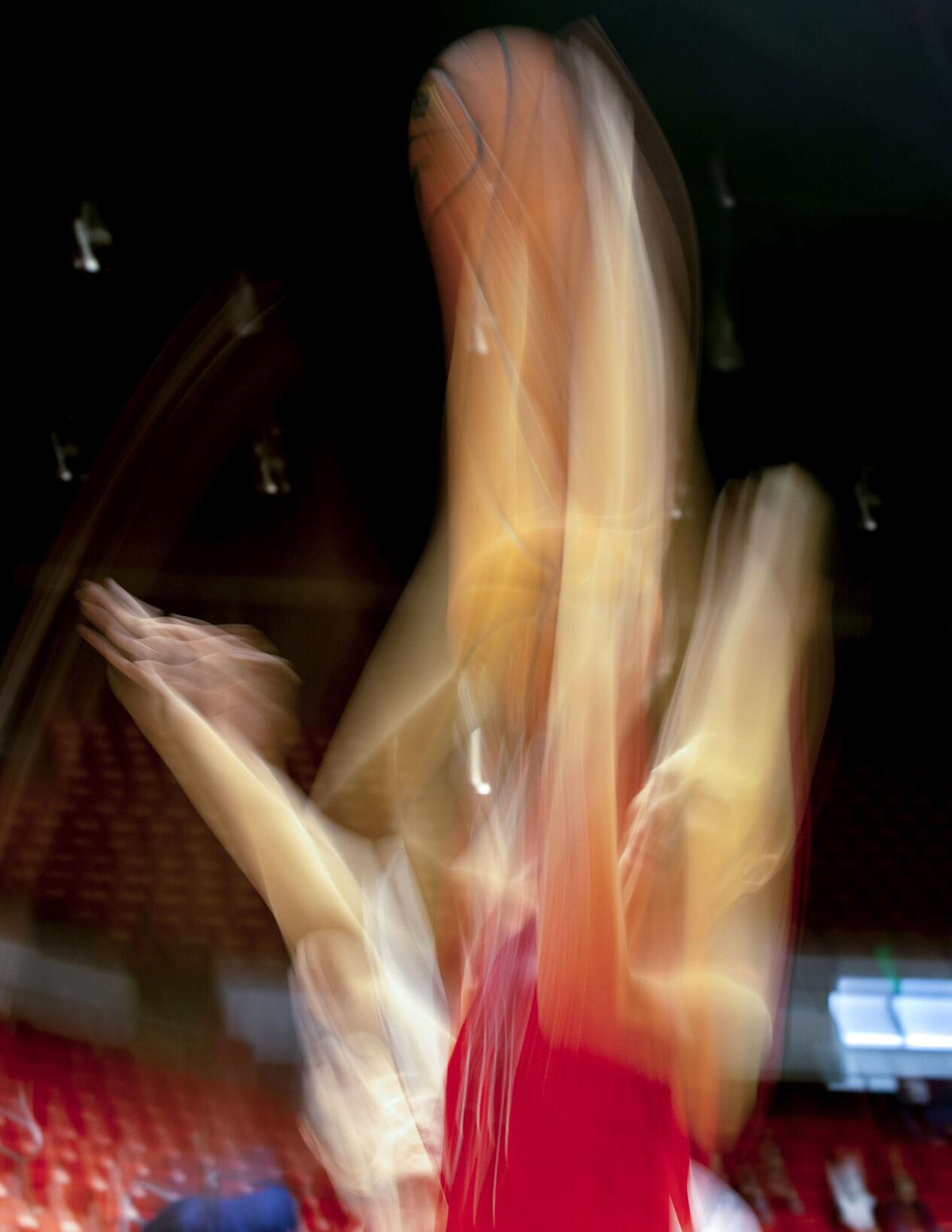 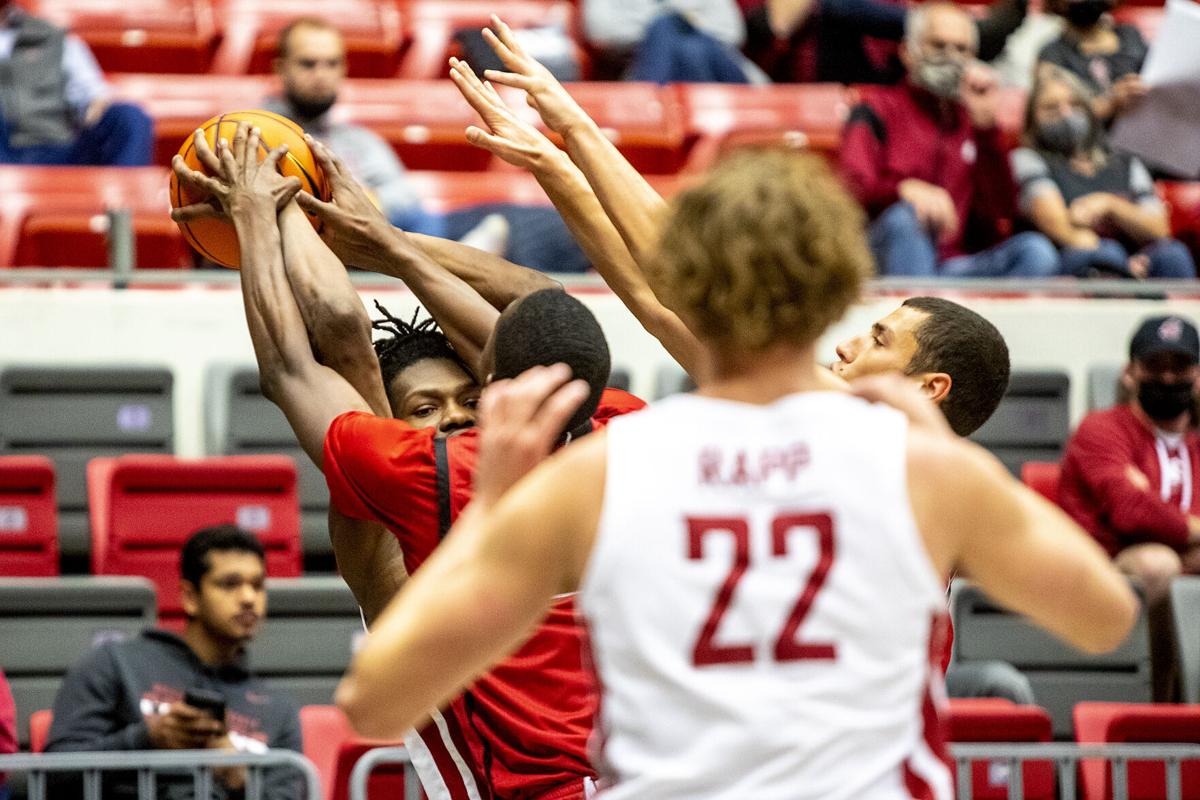 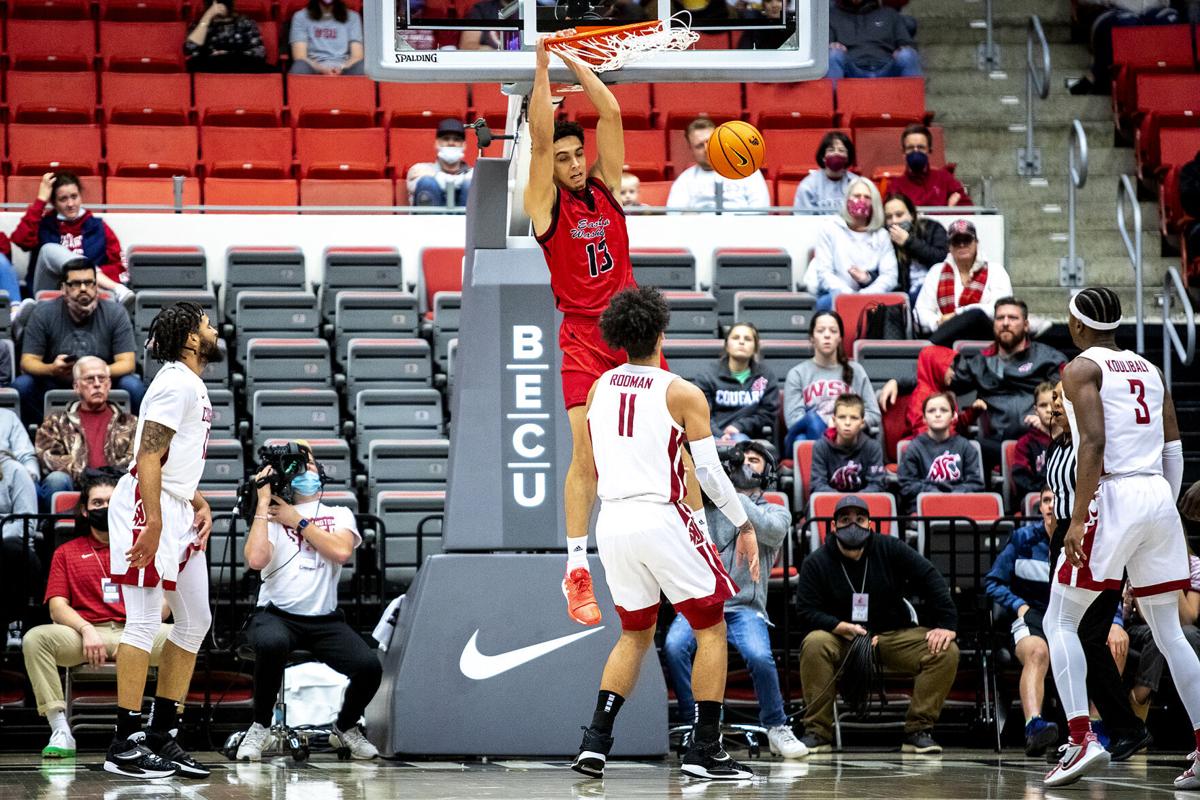 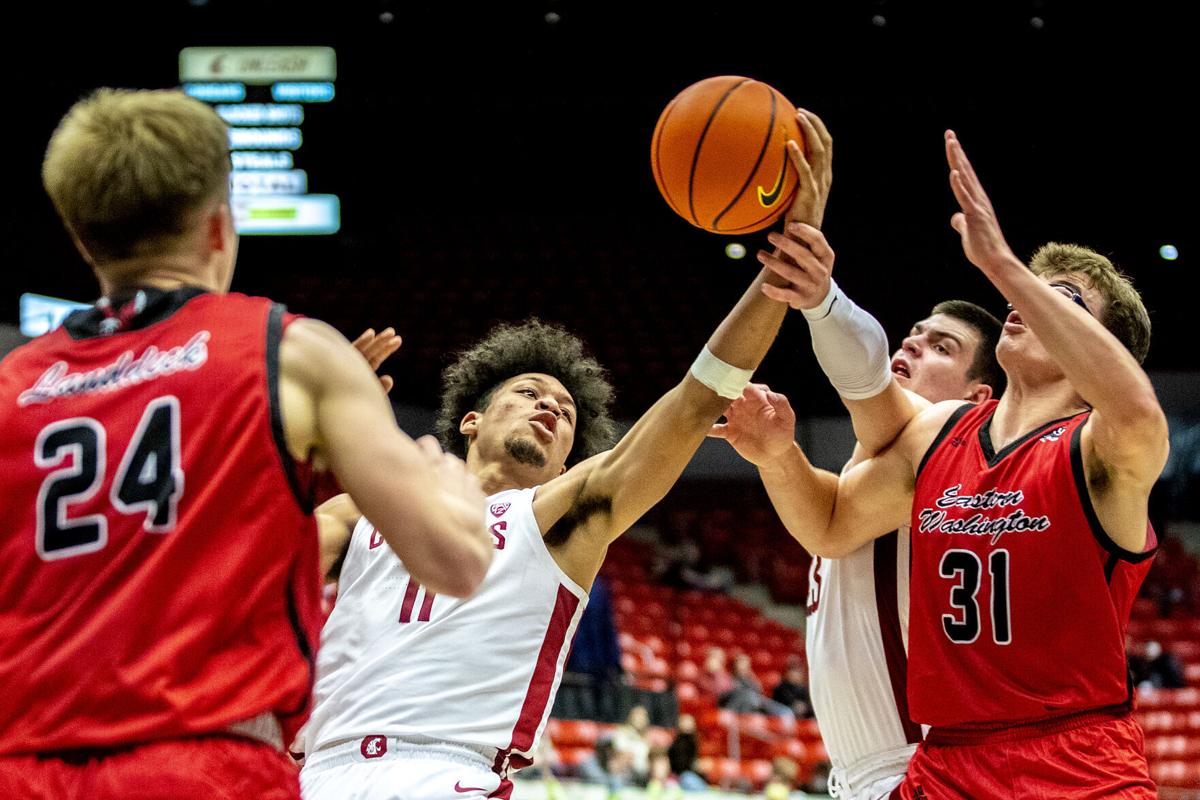 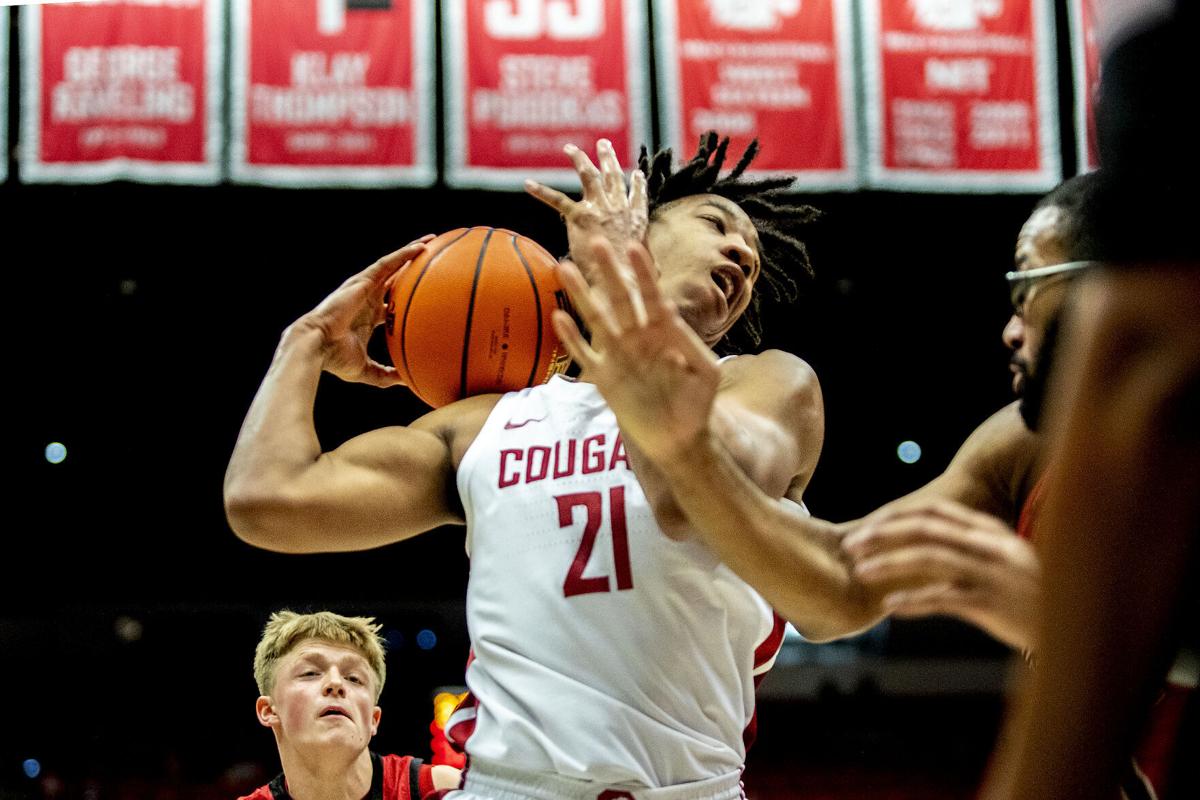 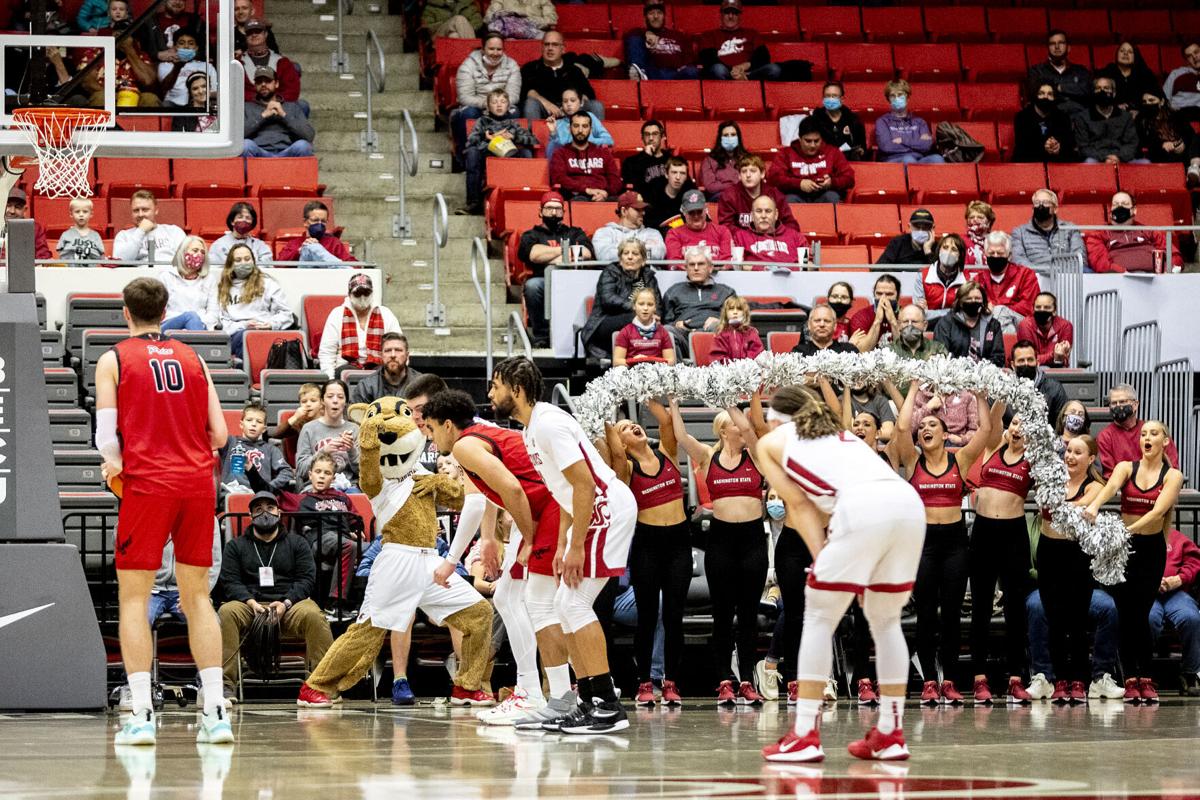 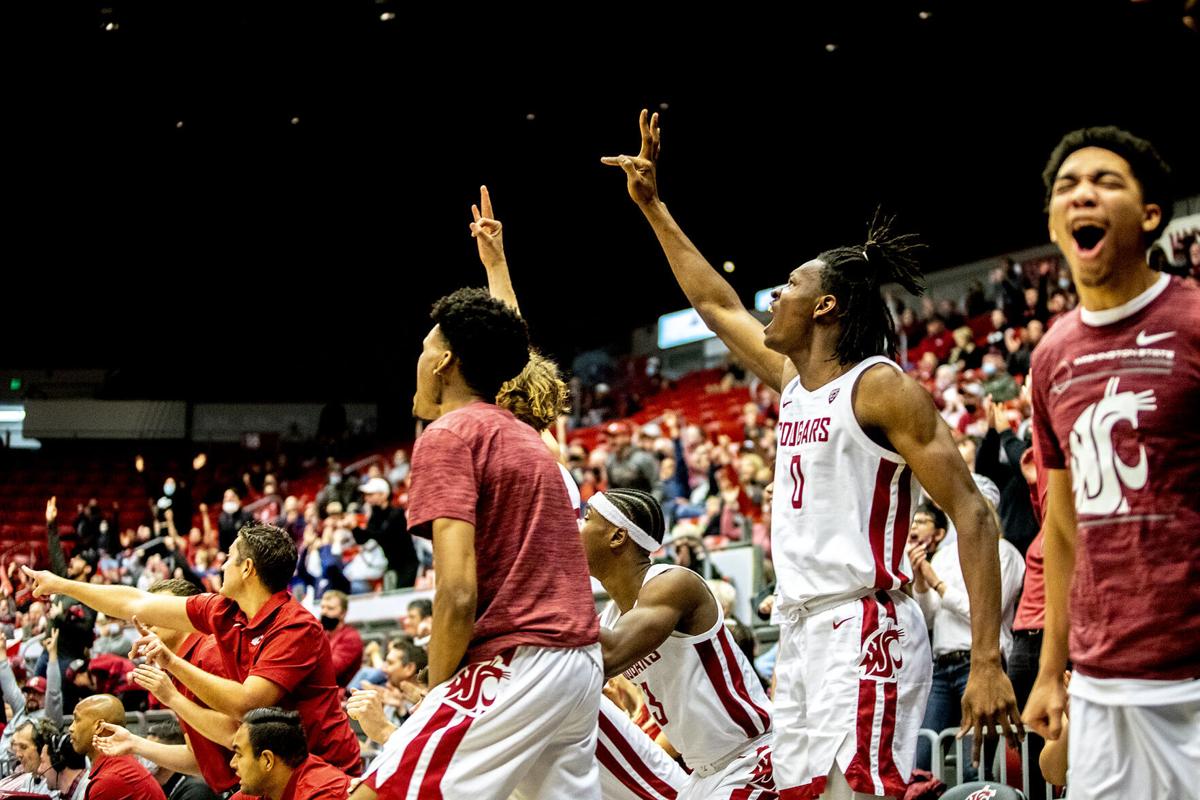 The Cougars bench cheers on their team on the court. Washington State lost to Eastern Washington 76-71 at Beasley Coliseum in Pullman on Saturday. 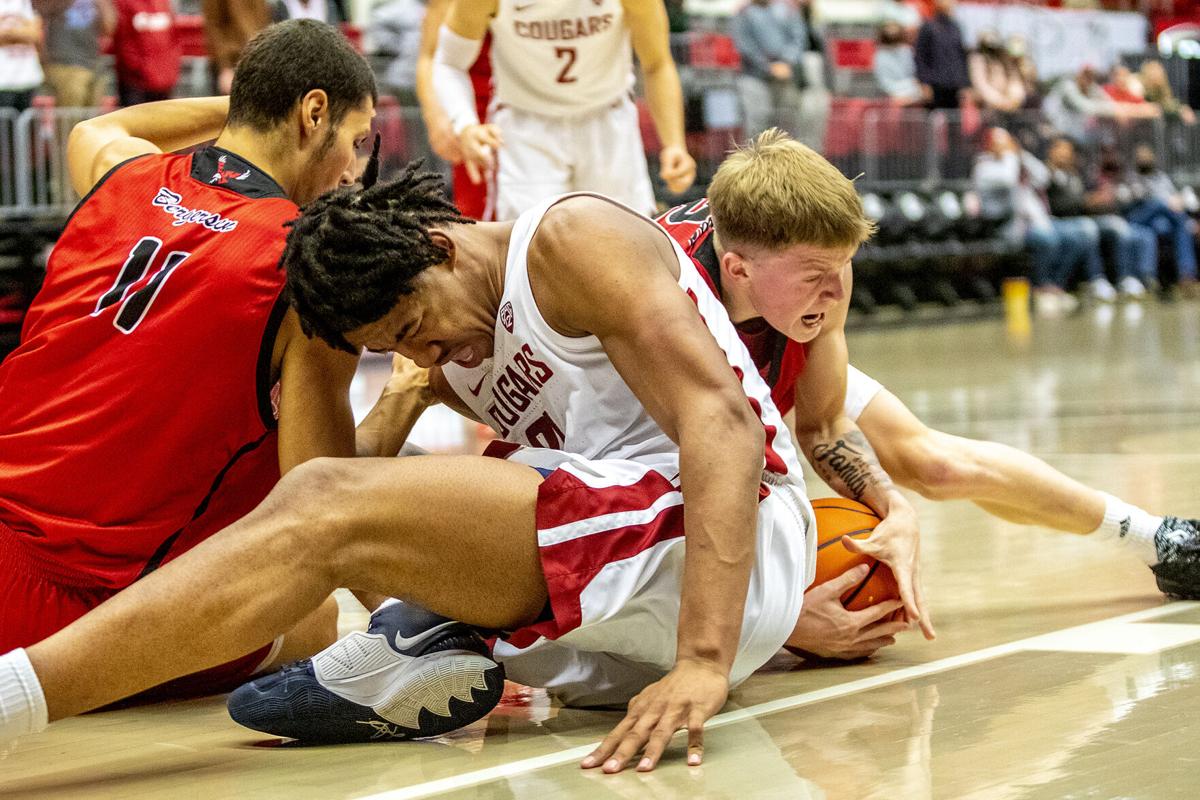 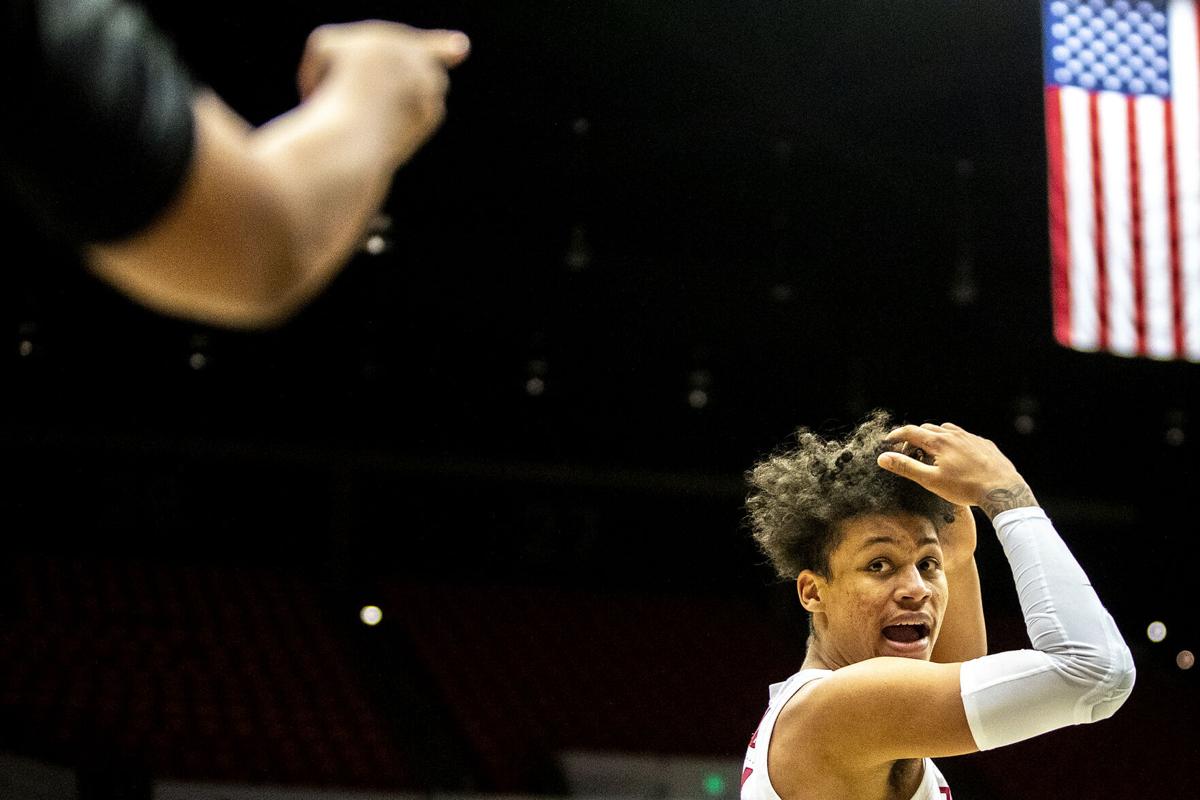 Washington State guard Michael Flowers, right, dejectedly walks back to the bench as Eastern Washington players celebrate behind him during Saturday’s nonconference game at Beasley Coliseum.

The Cougars bench cheers on their team on the court. Washington State lost to Eastern Washington 76-71 at Beasley Coliseum in Pullman on Saturday.

PULLMAN — Who would’ve known the best player on the court Saturday at Beasley Coliseum wouldn’t be a Pac-12 player or a starter on his own team?

Instead, the star of a game between Washington State and Eastern Washington was the Eagles’ 6-foot-2 freshman guard from Zillah, Wash.

Mason Landdeck sliced his way to the rim, pulled up for flashy mid-range jumpers, drilled timely 3-pointers and sank clutch free throw after free throw on his way to 24 points and a major upset of the previously undefeated Cougars.

“He just played with a lot of confidence,” WSU coach Kyle Smith said, “24 is pretty good in any college game, much less a freshman on the road doing that, so kudos to him.”

EWU’s baby-faced assassin put a damper on a Thanksgiving weekend crowd of 2,720 that the night before celebrated WSU’s first Apple Cup football win against Washington in nine years.

Fun fact: Landdeck is a cousin of former WSU soccer superstar Morgan Weaver, now a pro player with the Portland Thorns and who just made her first appearance with the U.S. women’s national team earlier in the day against Australia in Sydney.

Athleticism and a knack for showing up clutch in big games apparently runs in the family.

WSU (5-1) twice had seen massive first-half leads diminish in the second half in wins against Winthrop and UC Santa Barbara. But the Cougs, who led by as many as 19 in the first half against EWU (3-3), couldn’t hang on against the scrappy Eagles of the Big Sky Conference.

Despite shooting just 30 percent from the field in the first half and playing without leading scorer Noah Williams and key contributor TJ Bamba, who were out with minor injuries, the Cougs led 40-21 late in the first half.

But the Eagles rattled off 17 consecutive points on a run that went from the final two minutes of the first half to three minutes into the second period to cut the lead to two.

A 3 by WSU guard Michael Flowers halted the run, making it 43-38 Cougs, but EWU retook the lead for the first time since the game’s opening basket on a Landdeck triple a few minutes later to make it 48-47 Eagles.

“I think it’s a false sense of confidence there, and tonight they kept punching at us,” Smith said of WSU’s recent big halftime leads. “They made an adjustment where they went smaller in the second half and with our foul trouble and not having Noah and TJ, it was a little hard to figure what would be the best way to approach that from our end.

In a game where the shots weren’t falling and WSU’s usual tough defense wasn’t getting the needed stops, the Cougars hung around by getting to the free-throw line, where they finished 24-of-28 and shot better than 90 percent for most of the game.

Senior guard Tyrell Roberts went a perfect 8-of-8 from the line and finished with a team-high 23 points for WSU.

“I think we just gotta keep our heads on,” said Roberts, who had won 35 of his previous 36 games going back to his time at UC San Diego, according to Smith. “We gotta keep that cutthroat mentality. I think we have it, but we haven’t sustained it for two halves yet this year.”

After a Flowers 3 tied it at 65, EWU’s Ryan Bergersen compiled a traditional three-point play on the other end to kickstart a 7-0 Eagles’ run that put the game out of reach down the stretch.

Landdeck, fittingly, scored the Eagles’ final four points at the free-throw line. The undersized freshman did a bit of everything for EWU, even drawing a technical foul on WSU’s Dishon Jackson after some jawing after a loose-ball foul on Lindeck earlier in the second half.

The Cougars will try to clean up their second-half woes before opening Pac-12 play against Arizona State (2-5) at 4:30 p.m. Wednesday at Desert Financial Arena in Tempe, Ariz.

“I think, in a sense, we needed that,” Roberts said. “I think we got a little too comfortable giving away second-half leads and things like that, and getting away with a win, so I think it was a good wake-up call for us, and we’re going to get back to work and get after it Wednesday.”

Washington State's Tyrell Roberts, left, and Michael Flowers speak to the media after Saturday's nonconference loss to Eastern Washington at B…