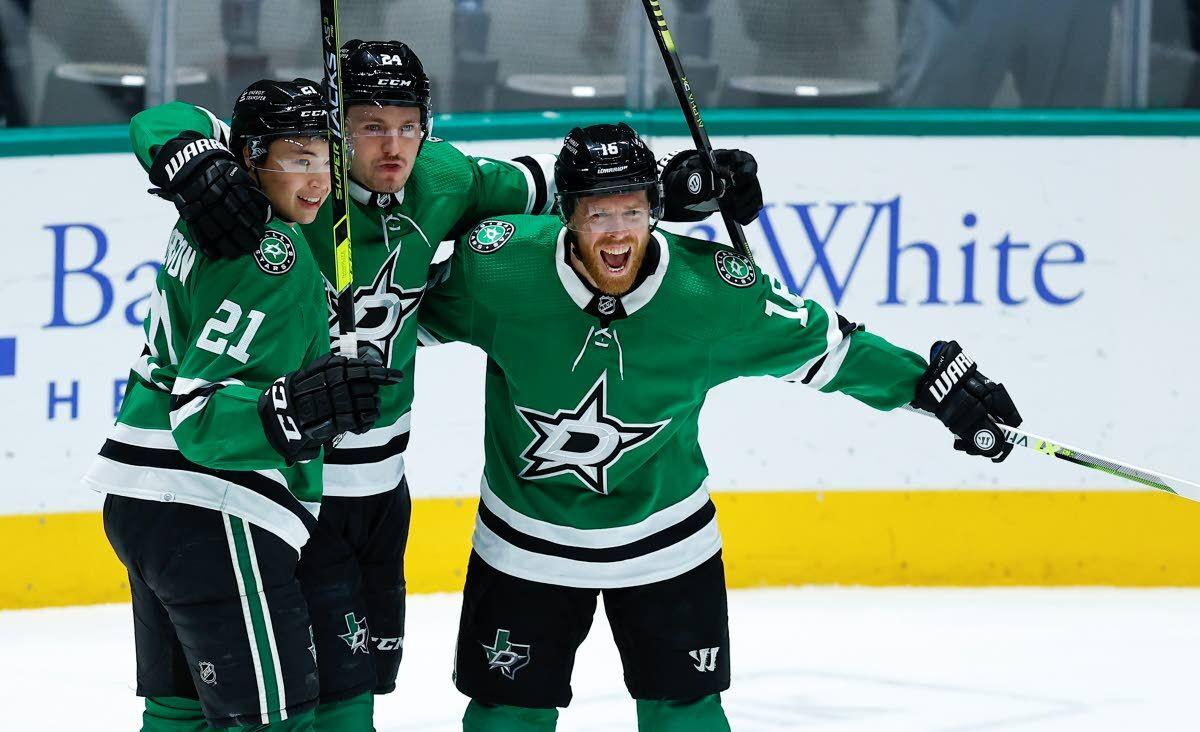 Dallas Stars forward Joe Pavelski, right, is congratulated by forwards Jason Robertson (21) and Roope Hintz (24) after scoring a goal during the first period of an NHL hockey game against the Seattle Kraken, Wednesday, April 12, 2022, in Dallas. (AP Photo/Brandon Wade) 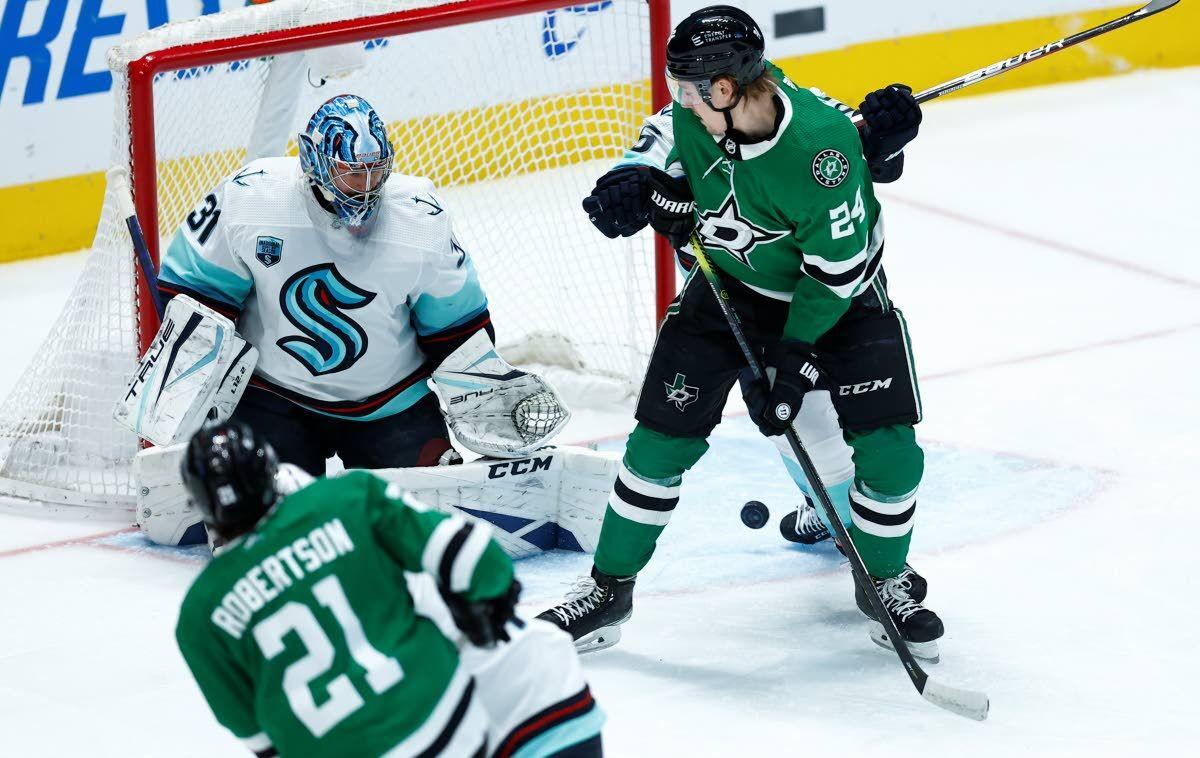 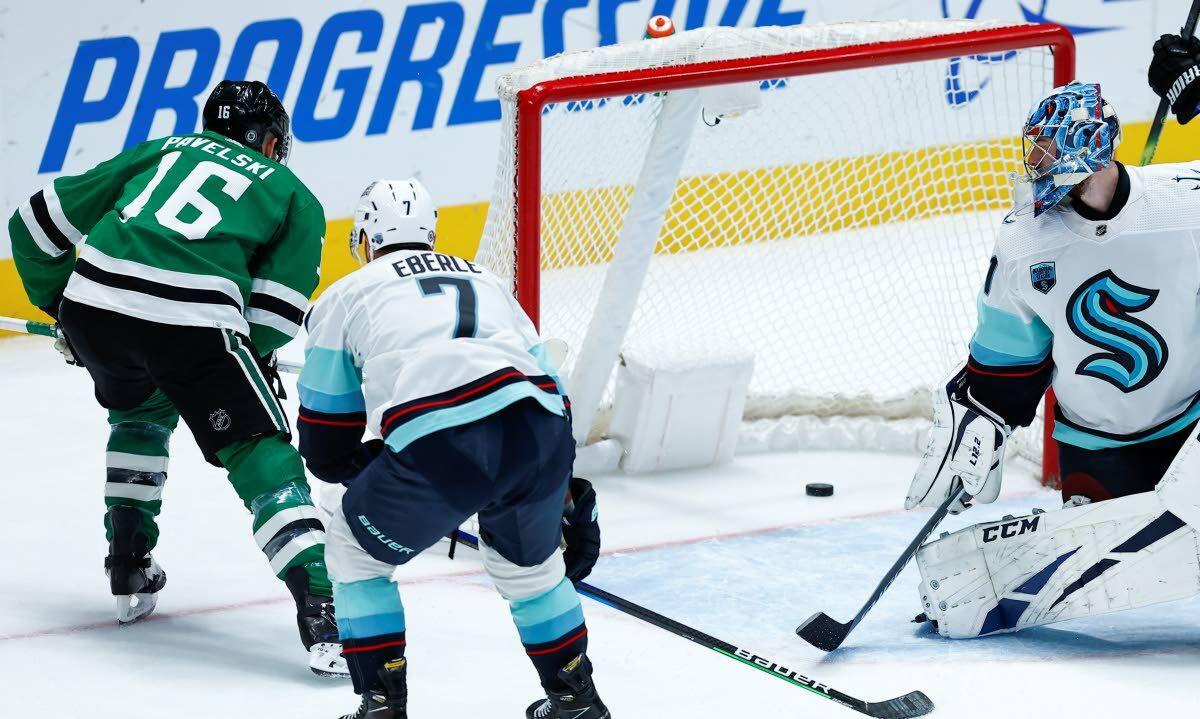 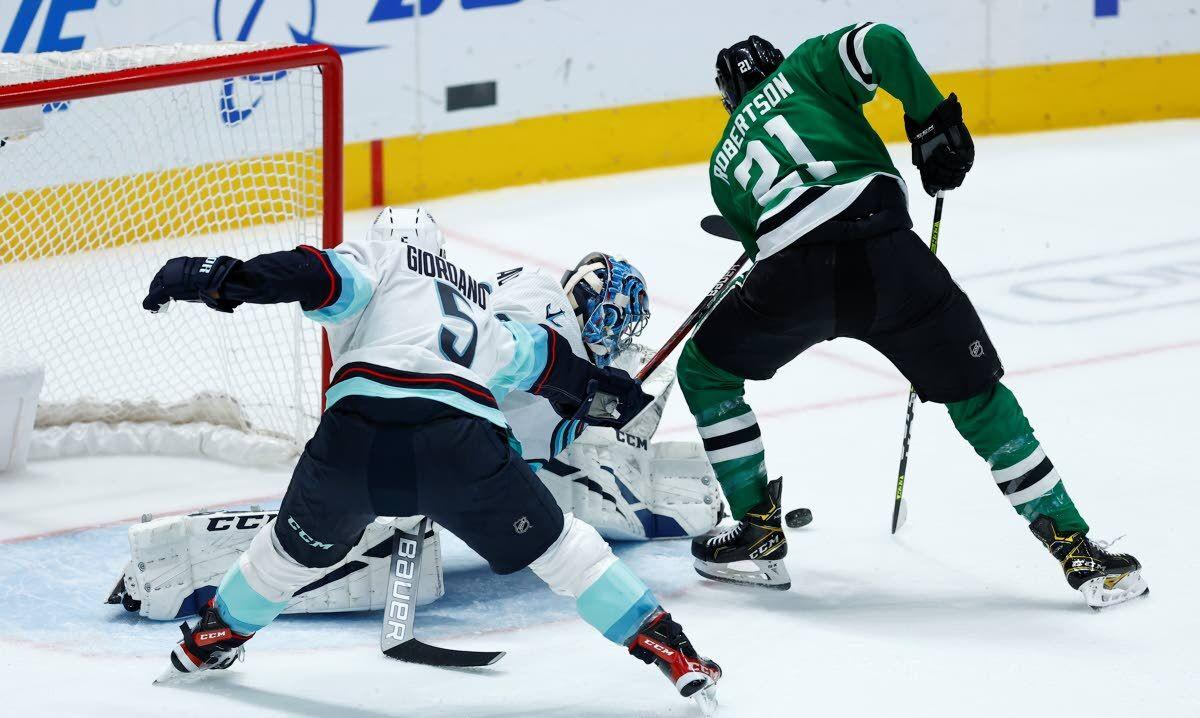 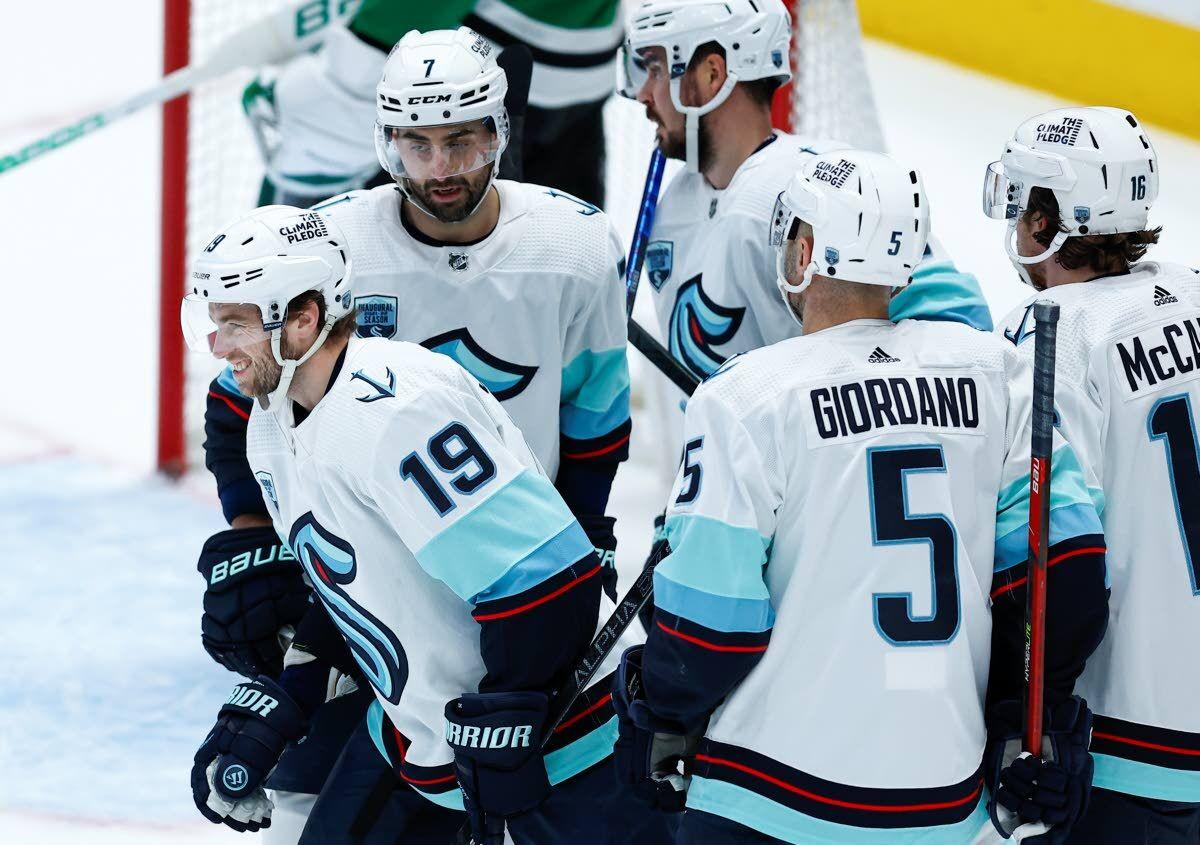 Seattle Kraken forward Calle Jarnkrok (19) is congratulated by teammates after scoring a goal during the first period of an NHL hockey game against the Dallas Stars, Wednesday, April 12, 2022, in Dallas. (AP Photo/Brandon Wade) 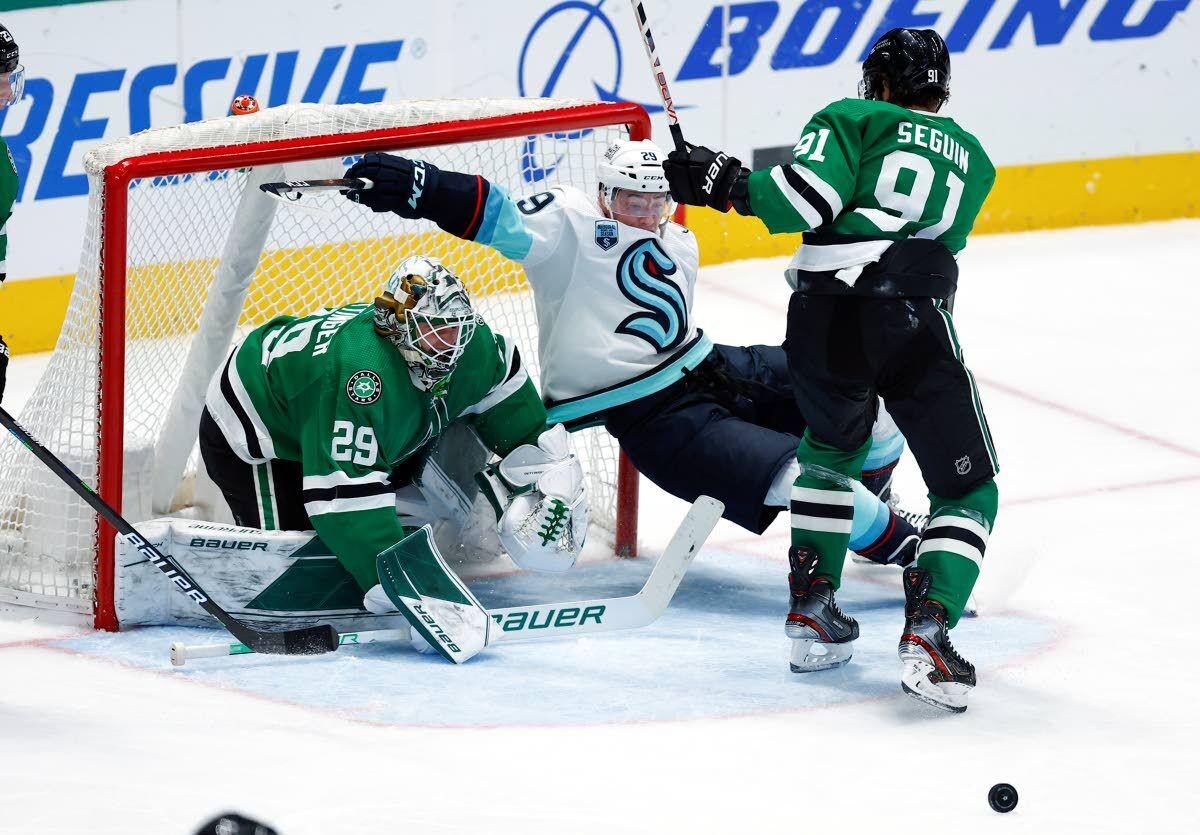 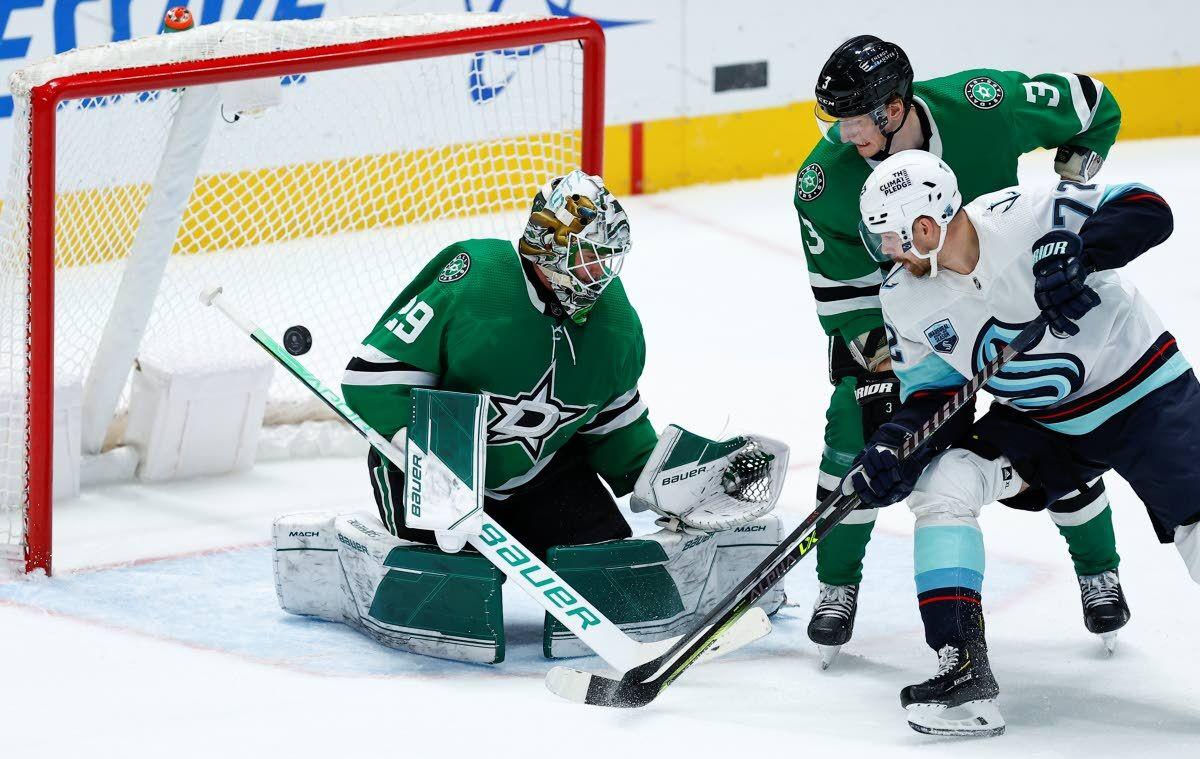 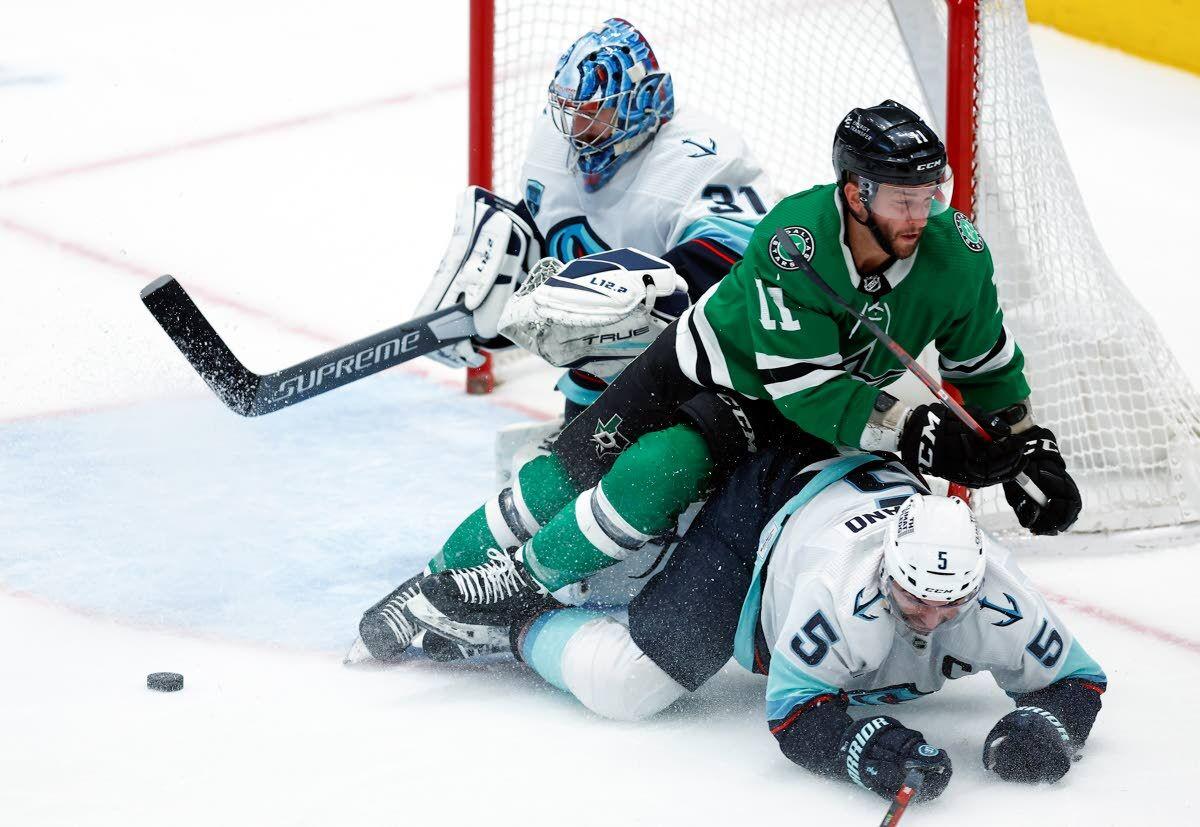 Dallas Stars forward Joe Pavelski, right, is congratulated by forwards Jason Robertson (21) and Roope Hintz (24) after scoring a goal during the first period of an NHL hockey game against the Seattle Kraken, Wednesday, April 12, 2022, in Dallas. (AP Photo/Brandon Wade)

Seattle Kraken forward Calle Jarnkrok (19) is congratulated by teammates after scoring a goal during the first period of an NHL hockey game against the Dallas Stars, Wednesday, April 12, 2022, in Dallas. (AP Photo/Brandon Wade)

DALLAS — While Joe Pavelski missed out on another hat trick, the 37-year-old center did something he had never done when the Dallas Stars finished their scoring with a 179-foot empty-net goal.

Pavelski’s third assist of the game came on that final score with 1:42 left, which with his two goals gave him the first five-point game in his 13 NHL seasons as the Stars won 5-2 in their first meeting against the expansion Seattle Kraken on Wednesday night.

“It’s nice to finally get one, but the win was definitely important,” Pavelski said.

“Everyone knows how good a player he is,” said Roope Hintz, his linemate who had a goal and two assists. “He was around the net a lot. He deserved that.”

Jason Robertson, the other part of that line, extended his NHL-best home point streak to 11 games with a goal and an assist.

That line got going in the game’s opening minute with Pavelski’s pass to the left circle for Robertson’s shot that went off the skate of Hintz, who got credited with his 14th goal.

Hintz got the primary assist on Robertson’s power-play goal that put the Stars up 3-1 with 6:59 left in the first period. Robertson had a some nifty stick work for a short backhander past Philipp Grubauer.

Both of Pavelski’s goals, giving him 15 for the season, were from right by the net. It was his fourth two-goal game this season, all in the past 16 games.

Midway through the first period, Miro Heiskanen took a laser shot from near the blue line that went just left of the net, then ricocheted hard off the boards and was knocked in by Pavelski waiting for the puck.

“As it’s going, you’re just reading the puck, hoping it came off the end wall like it did,” Pavelski said. “That’s a nice one to get to get you going.”

The Stars regained their two-goal lead late in the second period when, right after killing of a penalty, Esa Lindell passed to Pavelski just outside the crease.

“It’s his ability to sniff out the loose pucks, his ability to get in the open, and his anticipation of where the pucks is going,” coach Rick Bowness said. “Great poise around the net. Goal scorers know where to put the puck. .... He’s just got natural offensive instincts that you can’t teach.”

After Hintz and Pavelski assisted on Jani Hakanpaa’s empty-netter, Pavelski got one more shot on goal but wasn’t able to get his seventh career hat trick.

Jared McCann had his team-leading 15th goal and also assisted on Calle Jarnkrok’s power-play goal for the Kraken, who are 0-5-1 in their last six games.

Seattle was even at 1-1 with 11:35 left in the first period on Jarnkrok’s fifth goal. Pavelski scored the tiebreaker about 2 1/2 minutes later and the Stars led the rest of the way.

“Obviously we’ve talked a lot about ... taking the positives away from things, but kind of enough is enough here. Everybody’s getting pretty frustrated,” McCann said.

Dallas has won its last five home games, and 13 of 14 at the American Airlines Center.

Defenseman Jamie Oleksiak was the player Seattle took from the Stars in the expansion draft. A video of Oleksiak highlights with Dallas was shown during the game’s first timeout, and he got a nice ovation when shown on the Seattle bench, and he applauded the fans from there. Oleksiak played 286 regular-season games over nine seasons for Dallas after being the 14th overall pick in the 2011 draft.

NOTES: Robertson has six goals and 11 assists in the home point streak. Including the road, he has points in eight consecutive games overall, with five goals and seven assists. ... Goalie Braden Holtby and forwards Denis Gurianov and Alexander Radulov have all gone into the NHL’s COVID-19 protocol this week. ... Stars center Tanner Kero returned from concussion protocol and played for the first time since taking a blindside hit Dec. 18 against Chicago. ... The Las Vegas Knights, the NHL’s previous expansion team, played their first-ever game in Dallas. They beat the Stars 2-1 on Oct. 6, 2017

Stars: At Florida on Friday night to open a stretch of six of seven on the road.