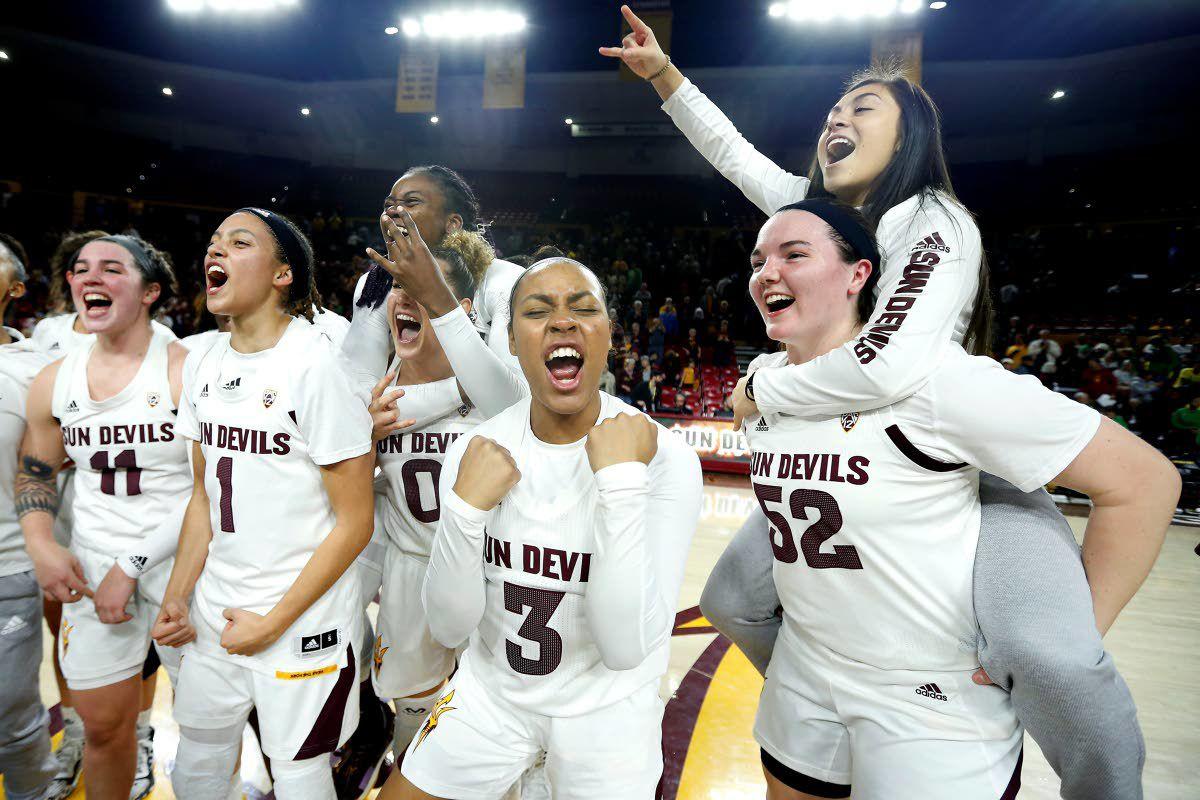 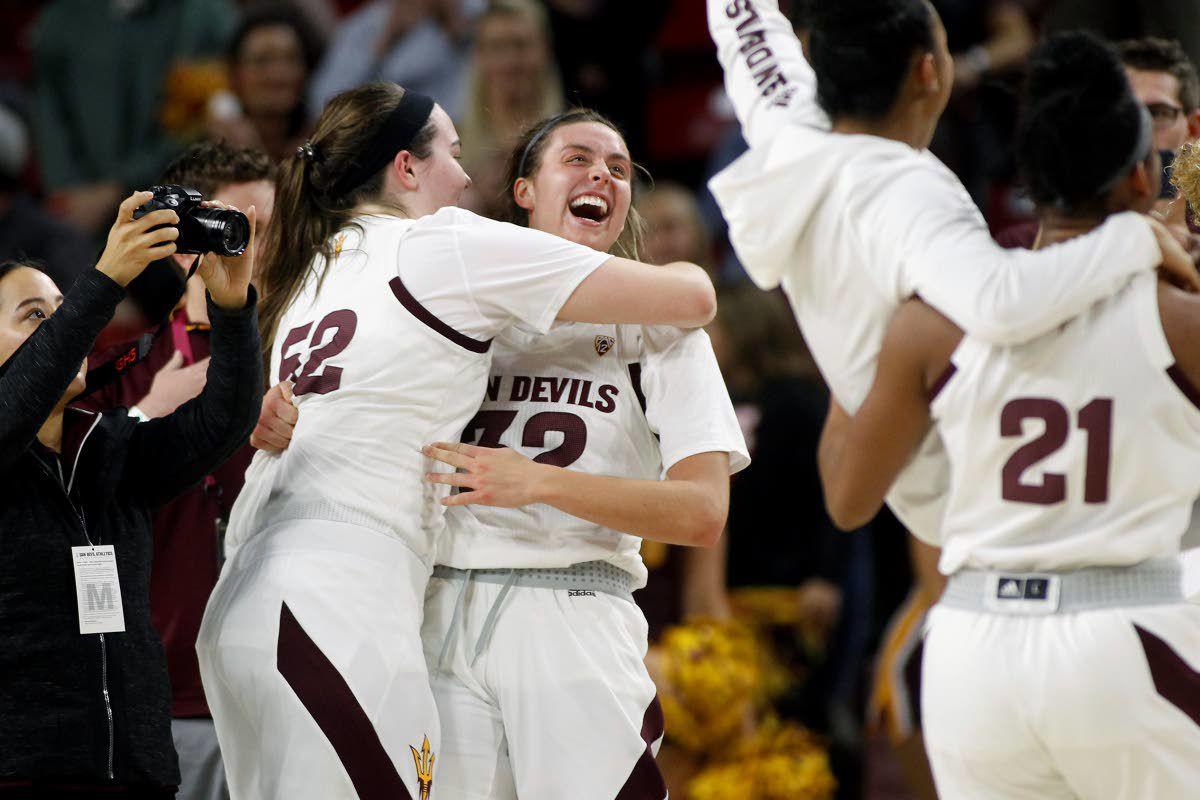 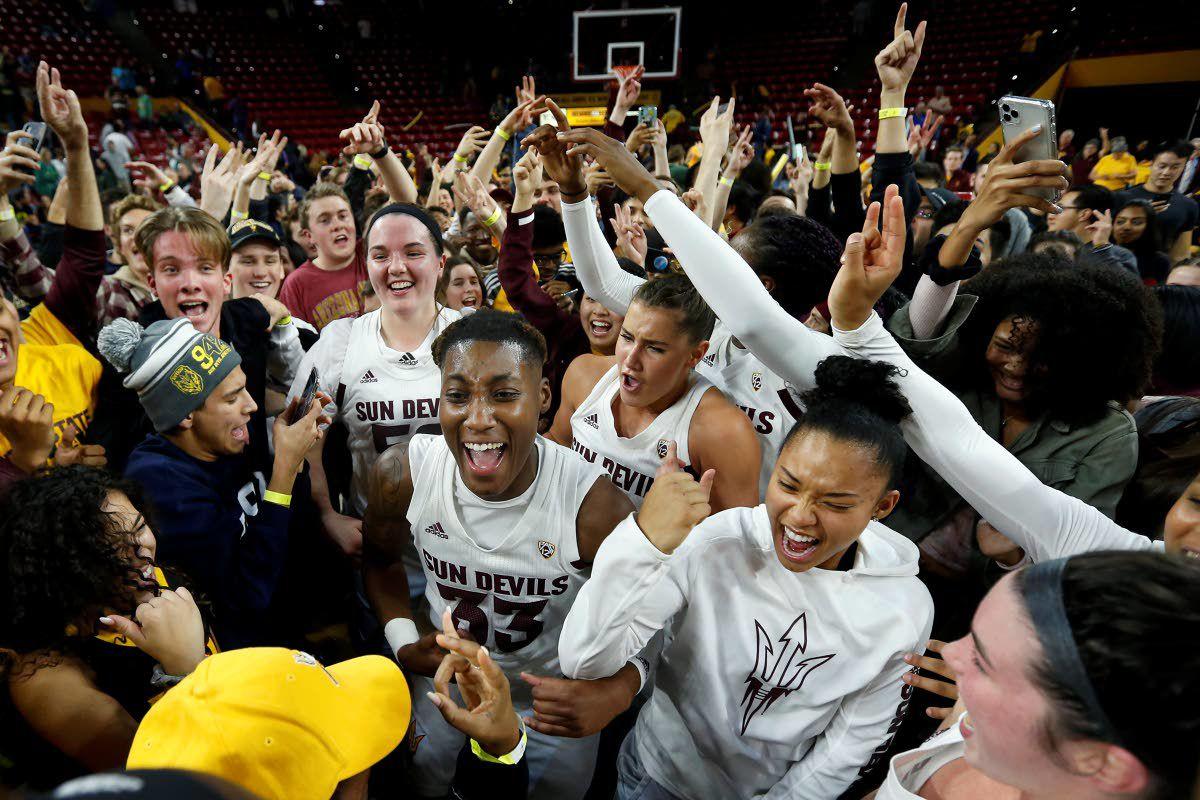 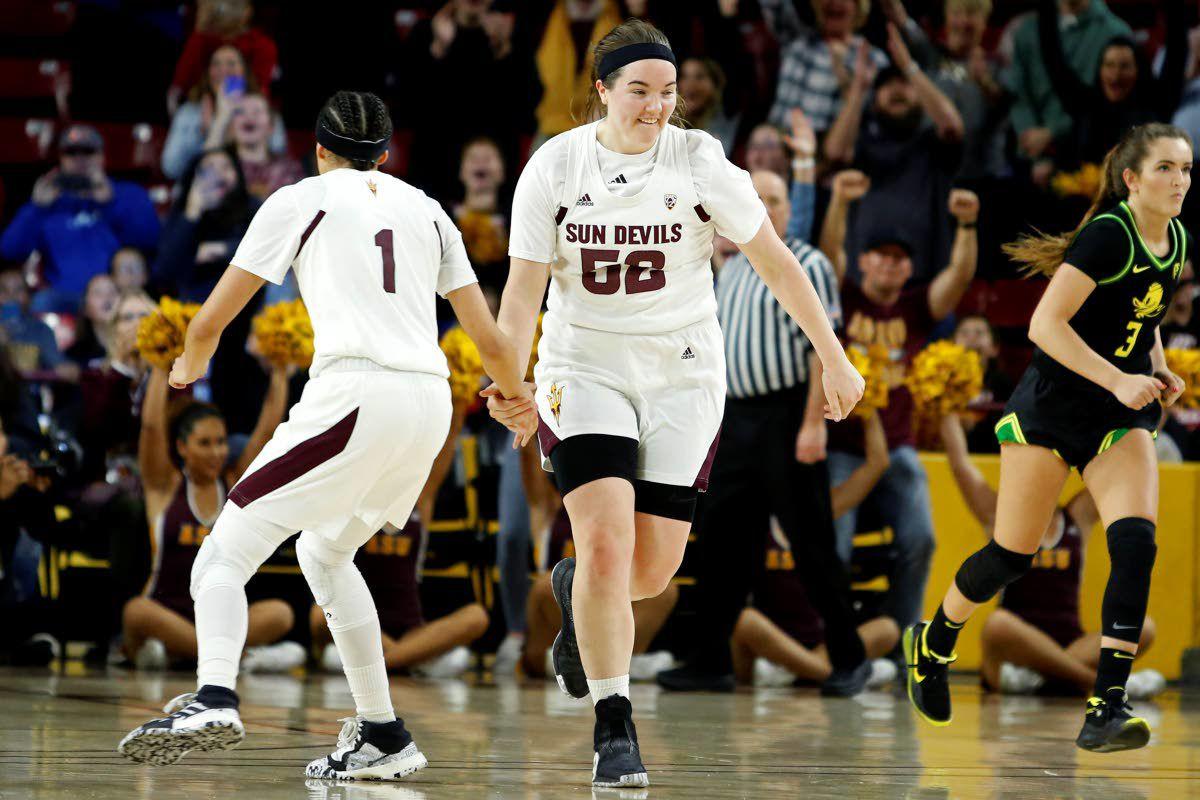 Arizona State center Jamie Ruden (52) is congratulated by Reili Richardson (1) after making a basket against Oregon during the second half of an NCAA college basketball game Friday, Jan. 10, 2020, in Tempe, Ariz. Arizona State defeated No. 2 Oregon 72-66. (AP Photo/Ralph Freso) 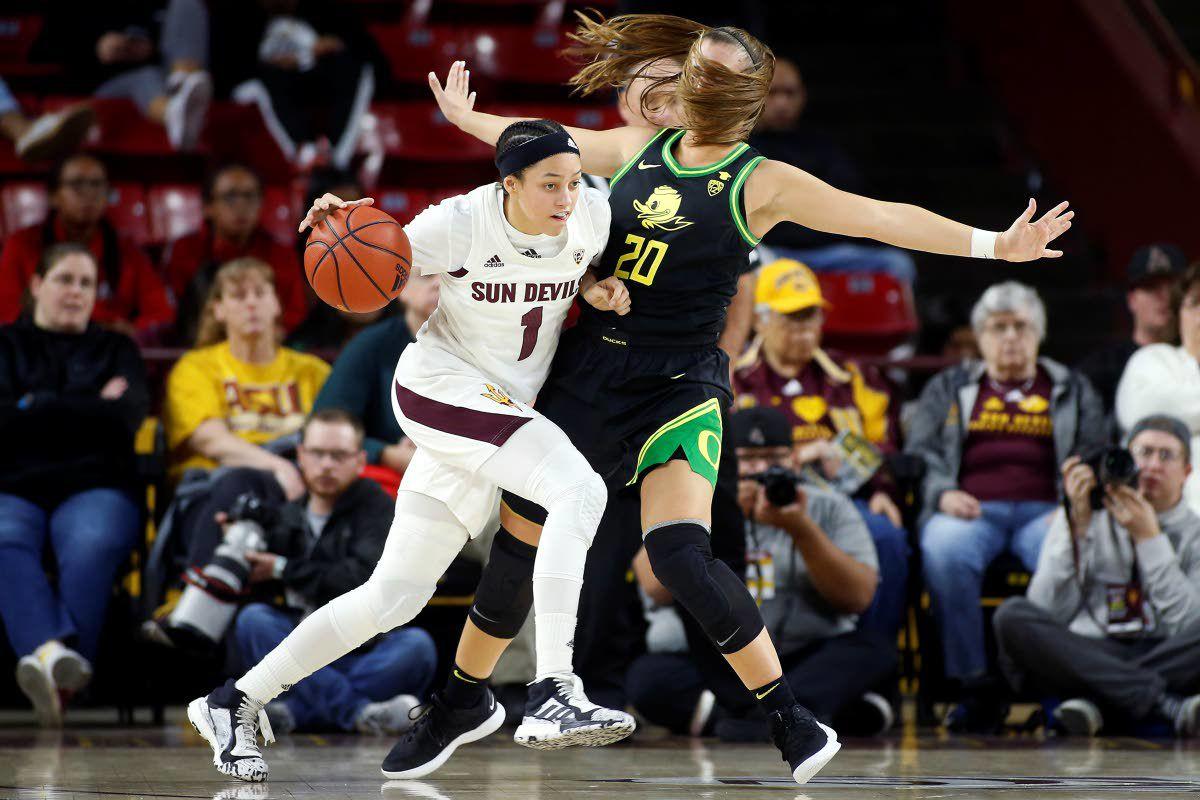 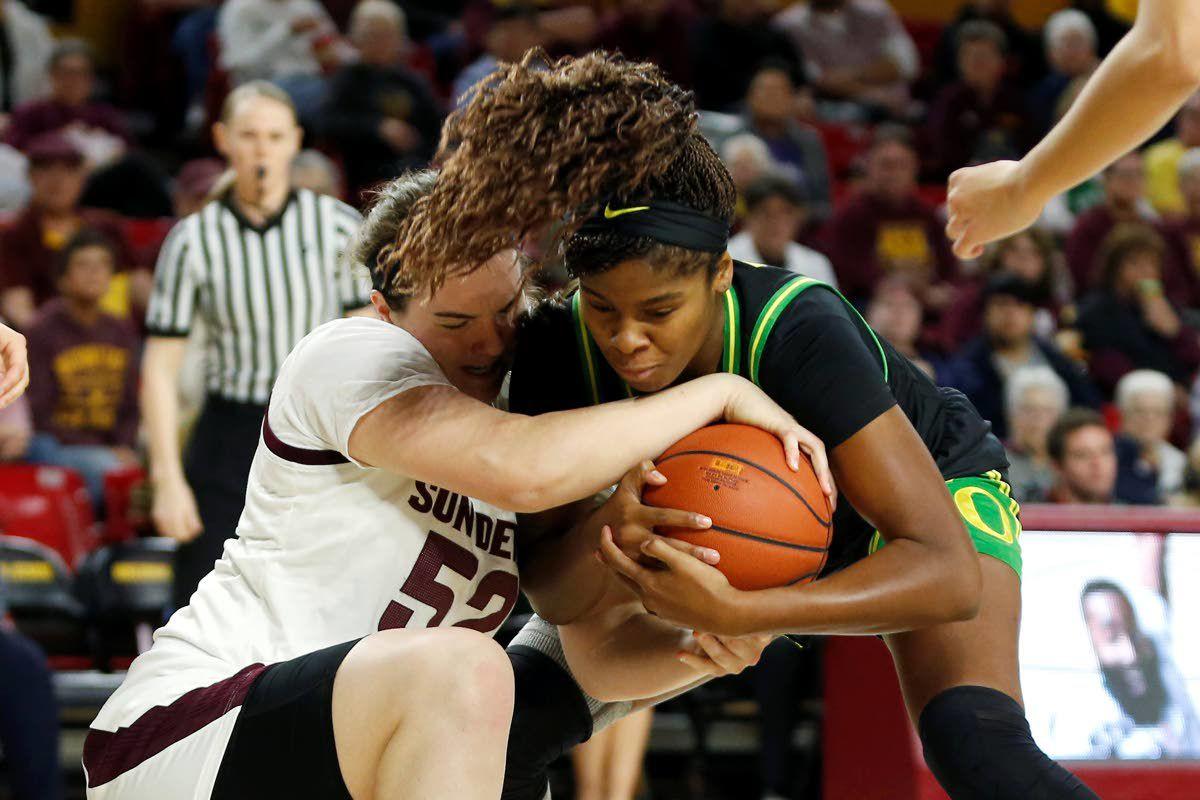 Arizona State center Jamie Ruden (52) is congratulated by Reili Richardson (1) after making a basket against Oregon during the second half of an NCAA college basketball game Friday, Jan. 10, 2020, in Tempe, Ariz. Arizona State defeated No. 2 Oregon 72-66. (AP Photo/Ralph Freso)

TEMPE, Ariz. — Robbi Ryan scored 13 of her 17 points in the second half, Jamie Ruden hit two big baskets late and Arizona State stormed back to upset No. 2 Oregon 72-66 on Friday night.

Ryan hit six 3-pointers in the second half after starting 0 for 2 and Ruden scored twice inside in the final 1:13.

Ruden also grabbed a late offensive rebound and Reili Richardson hit four free throws in the final 15 seconds. ASU’s students stormed the court after the Sun Devils beat their highest-ranked opponent since knocking off No. 2 Stanford in the 2002 Pac-10 tournament title game.

The Ducks (12-2, 2-1) dominated through three quarters before falling apart in the fourth, spoiling their chance to move to No. 1 next week following top-ranked Connecticut’s loss to Baylor on Wednesday.

The Beavers (15-0, 3-0 Pac-12) stayed undefeated but won by less than 10 points for the first time all season. Pivec shot 7 of 12 from the field and added 10 rebounds and six assists. Her biggest moment was in the final seconds when she got the ball in the paint, drove to the basket and finished the contested short jumper over Arizona’s defense.

STANFORD, Calif. — Hall of Famer Tara VanDerveer became the first women’s basketball coach with 500 regular-season wins in a single conference, and Stanford beat California in the first of two weekend meetings between the Bay Area rivals.

Freshmen Haley Jones and Ashten Prechtel scored 17 and 13 points, respectively, as the Cardinal (14-1, 3-0 Pac-12) took control from the opening tipoff to win their fourth straight game since the team’s lone defeat at Texas on Dec. 22.

It marked the debut matchup for first-year Cal coach Charmin Smith facing her former coach in VanDerveer, who improved to 500-78 in regular-season conference play in the Pac-12 that was formerly the Pac-10. Geno Auriemma of Connecticut has his victories split between the AAC and Big East, while the late Pat Summitt of Tennessee earned 458 victories in the SEC.