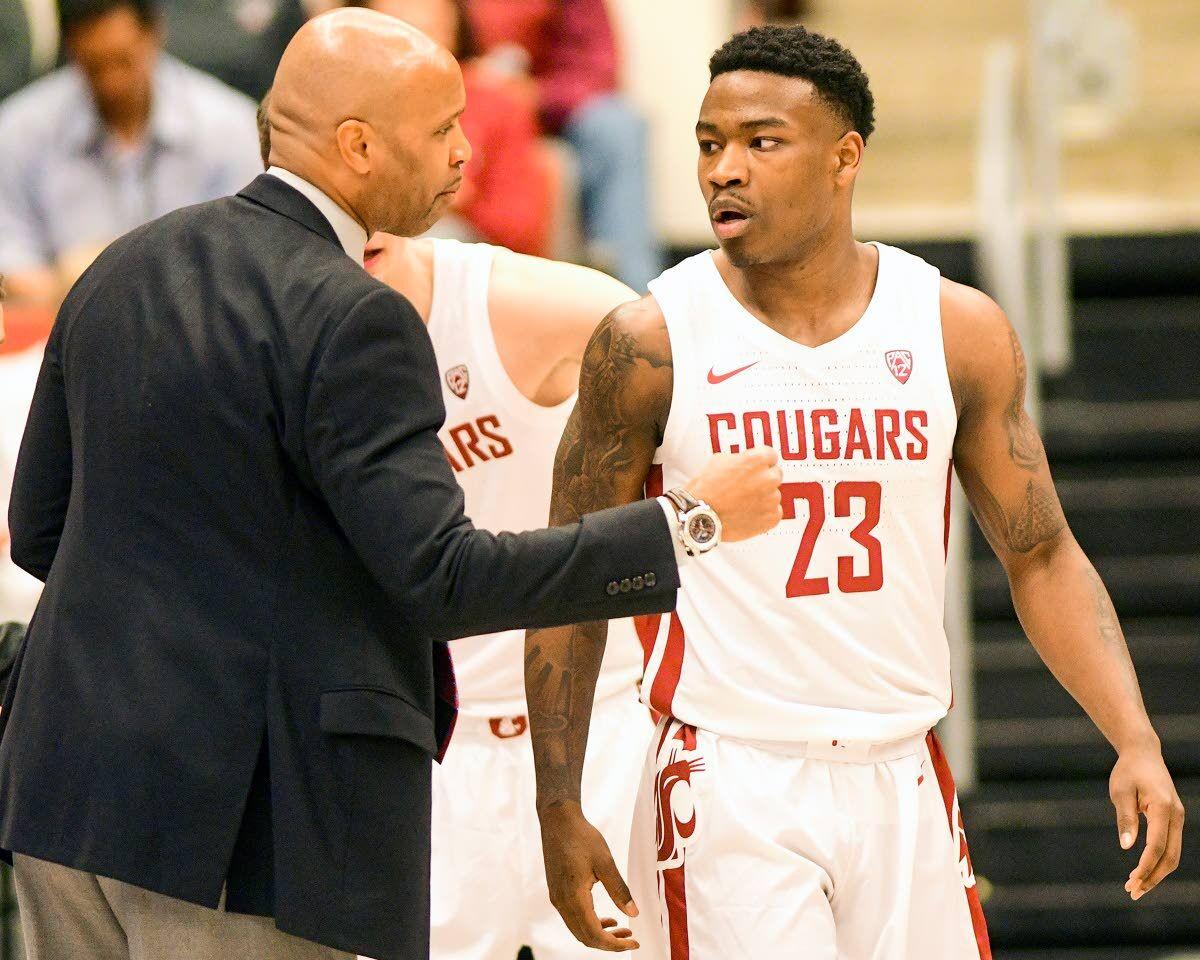 Washington State guard Jaylen Shead talks with assistant coach Derrick Phelps after a timeout during a game against Seattle University on Nov. 7 at Beasley Coliseum. 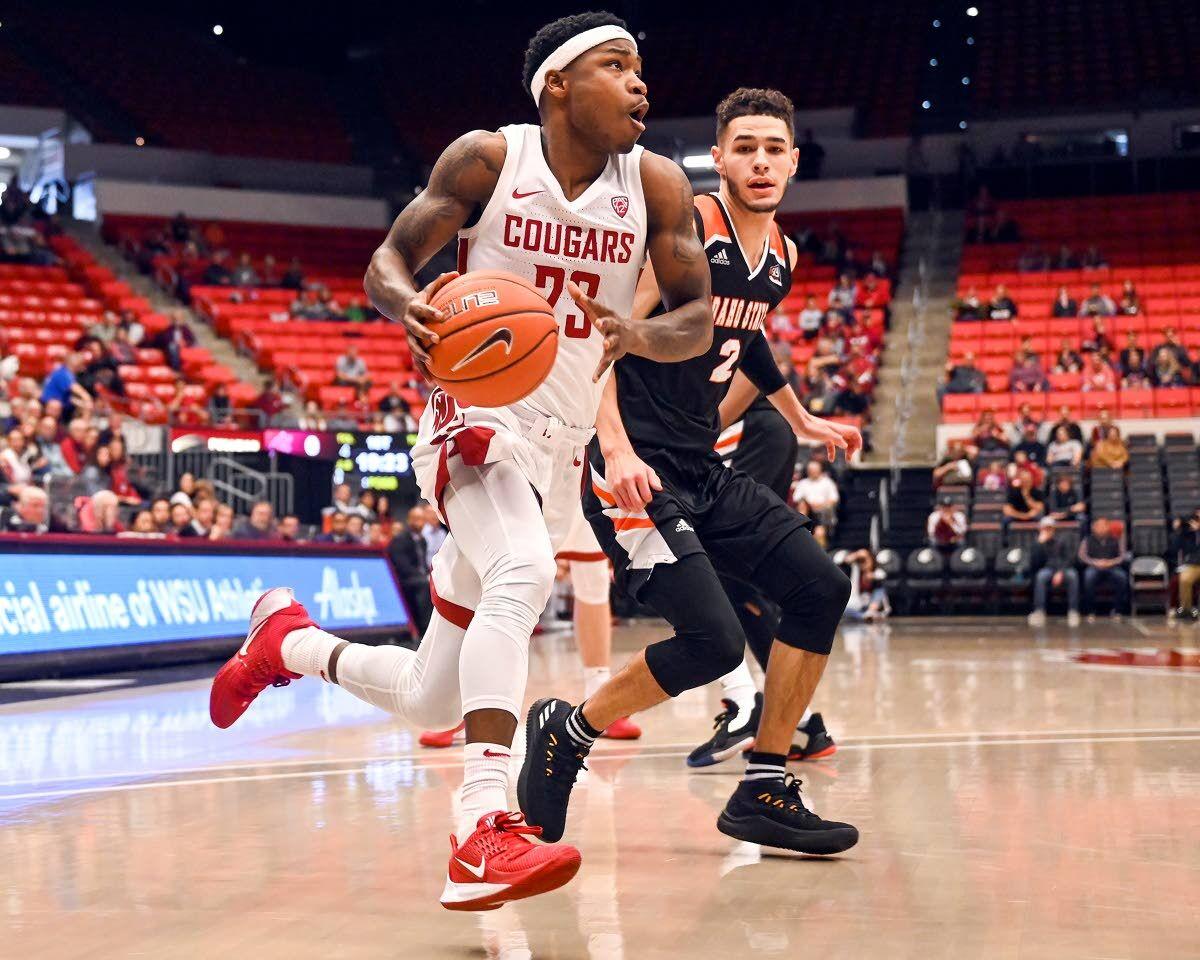 In this Nov. 17, 2019 file photo, Jaylen Shead drives to the basket past Idaho State’s Tarik Cool during the first half of a non-conference game on at Beasley Coliseum in Pullman. 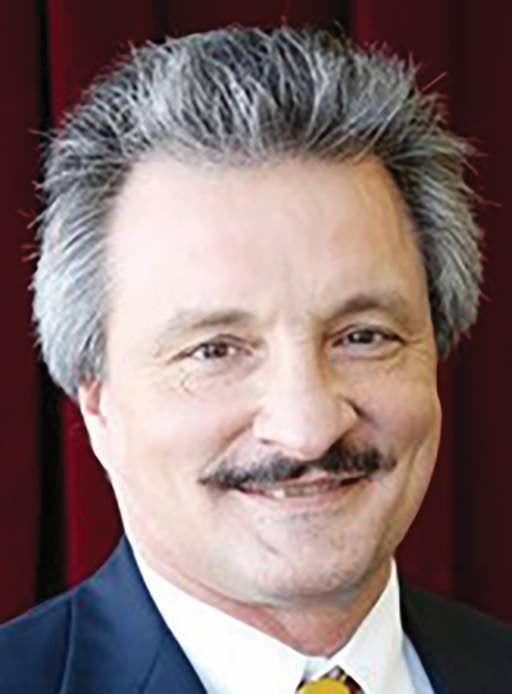 Washington State guard Jaylen Shead talks with assistant coach Derrick Phelps after a timeout during a game against Seattle University on Nov. 7 at Beasley Coliseum.

In this Nov. 17, 2019 file photo, Jaylen Shead drives to the basket past Idaho State’s Tarik Cool during the first half of a non-conference game on at Beasley Coliseum in Pullman.

About 17 hours after former Washington State guard Jaylen Shead alleged a number of racist comments and overall mistreatment by Texas State coach Danny Kaspar, the school announced Friday it was looking into the matter.

“At my request, the university has launched a formal investigation through the office of equal opportunity and Title IX,” wrote Dr. Larry Teis, Texas State’s athletic director. “It is our top priority to fully cooperate with the investigation.”

Shead, who appeared in 12 games for the Cougars last season before being sidelined with a hip injury, transferred to the Pullman school after two years in San Marcos, Texas, with the Bobcats. On Thursday, Shead shared multiple disturbing experiences he had while playing for Kaspar.

Shead said he transferred to WSU because of his troubles at Texas State, and he hadn’t spoke up before because he was afraid it might jeopardize his career. In the wake of mass protesting against police ­violence against black people and the general mistreatment of the black community, Shead felt the timing was right. The former Coug player’s allegations have been widely circulated, and the story has gone national.

Shead’s former Bobcats teammate, Alex Peacock, shared the post, affirming its truth. Peacock, one of Shead’s close friends, was interviewed extensively Friday by the San Marcos Daily Record, which posted the transcript. Peacock discusses the difficulty of speaking out, because he and other teammates didn’t think their voices would be heard. He said team staffers didn’t condone Kaspar’s actions, but didn’t think they could do much about it either.

Former Bobcat Deris Duncan told KTSW Sports that players like Shead would laugh at Kaspar’s comments, and the coach’s words are “being twisted and used to get attention.” Peacock said that was “disingenuous.” In the moment, he said, the laughs were uncomfortable.

“... Here’s my thing: I don’t think coach Kaspar is a racist. I don’t think he’s an all-out ‘I don’t like black people’ racist,” Peacock told the Record. “I think he makes racially insensitive comments that he doesn’t know the effect of what they do and how they’re received. I think he thinks he’s just making jokes, which aren’t cool. But at the end of the day, that doesn’t excuse the fact that you can’t do it. And so I think he’s just gotten away with it for so long, naively or maybe not.”

Basil Brown, a Texas State basketball player in the early-2010s, filed a lawsuit in 2013 against the school, Kaspar and others, alleging Kaspar used racially insensitive language on at least three occasions, according to Yahoo Sports. Basil implies he lost his scholarship because of his race. The lawsuit eventually was dismissed because it was too speculative.

According to Andrew Zimmel, a podcaster who covers Texas State, four former Bobcat players and two staff members have confirmed the accusations off the record.

“I personally find these allegations deeply troubling,” Teis said. “I, and the entire department of athletics staff, take the concerns expressed by our former student-athletes very seriously.

“... The department of athletics is committed to strengthening our university culture that values and supports diversity, equity and inclusion for our student-athletes, staff, and community.”