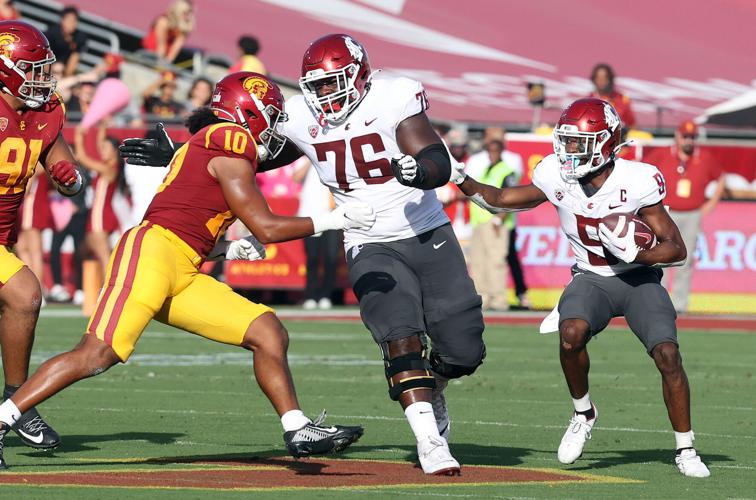 Washington State guard Grant Stephens (76) blocks for receiver Renard Bell during the first half of a Pac-12 game on Saturday against USC at L.A. Memorial Coliseum. Stephens was ejected for targeting in the second half of the game and will miss the first half of WSU’s Pac-12 contest against Oregon State this weekend. (WSU Athletics) 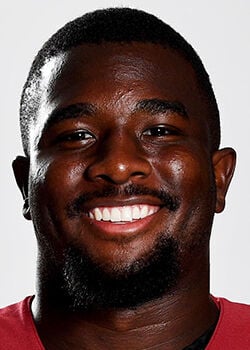 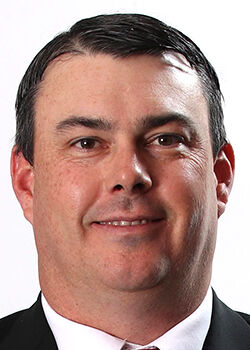 Grant Stephens didn’t start playing football until he was a senior in high school. Once in college, he spent the entirety of his career on the right side of the offensive line, and has played primarily right guard for Washington State this season.

So what was his response when offensive line coach Clay McGuire asked him to switch to left tackle for the Arizona State game on short notice because of injuries?

“Coach Mac believed I could do it,” Stephens said after the 28-18 win, which also happened to be his birthday. “I have a lot of trust for him as a coach because he does what he does very well.

“That was really it. We had a short conversation about it and I just ran at it full speed and tried to progress every day.”

WSU has used 12 offensive linemen this season as it’s dealt with injuries, inexperience and a mix-and-match approach to finding the best five guys who give the Cougs the best chance to win football games.

That’s meant that guys like Stephens — who started the season at right guard and also has played right tackle and, now, left tackle this year — have had to learn multiple positions on the fly.

Stephens said he had three days to really nail down the left tackle position before the ASU game.

“He’s a selfless guy and I mean that with every ounce of the word,” WSU edge Brennan Jackson said. “So making that switch, he’s selfless and I know he can do it to the best of his ability.”

Stephens, a senior from Missouri City, Texas, was under-recruited after playing just one season of high school football. He ended up at Northern Colorado where he earned All-Big Sky second-team honors and was named a team captain as a junior in 2021.

He transferred to WSU during the summer and immediately made an impact on an offensive line in need of another veteran presence.

It’s been an up-and-down season for WSU’s hogs, but the group has picked it up in recent weeks despite the multiple position switches. In wins against Stanford and Arizona State, the Cougars tallied a combined 443 rushing yards.

The loss of standout left tackle Jarrett Kingston to a season-ending injury against the Cardinal hurt, but WSU coach Jake Dickert has praised the versatility of players like Stephens, Ma’ake Fifita and others.

“I think it shows the mental makeup of (Stephens and Fifita) to have the ability to flip them and to know what they are doing assignment-wise,” Dickert said earlier this season. “There is a difference between guard and tackle that we all realize. Credit to both of them … saying, ‘Hey, this is what I need to do to be the best for the team.’ Being able to handle a change like that, not everyone can do it.”

Dickert hinted that the team might use freshman Christian Hilborn at left tackle this week.

If that’s the case, expect Stephens to play wherever he’s needed and to do it with a smile on his face as he’s done all along.

As a first-year Coug, this also will be the first season Stephens will get to play in a bowl game. The Cougars qualified for a bowl with their win against the Sun Devils.

“It’s surreal every day I walk into this building because I love these guys so much,” Stephens said. “To even have a few more days with these guys and to even be a part of a small chapter of their lives and their story, it’s just the best thing ever. I’m just grateful to God to even be here.”

Veteran slot receiver Renard Bell is set to return this week after missing four games with an injury, Dickert confirmed.

The seventh-year senior suffered an upper body injury in the first half Oct. 8 at USC and hasn’t played since.

Bell this season owns 20 catches for 282 yards and two touchdowns in six games.

He’s one of WSU’s biggest leaders and has been traveling with the team the past several weeks to provide leadership from the sideline.