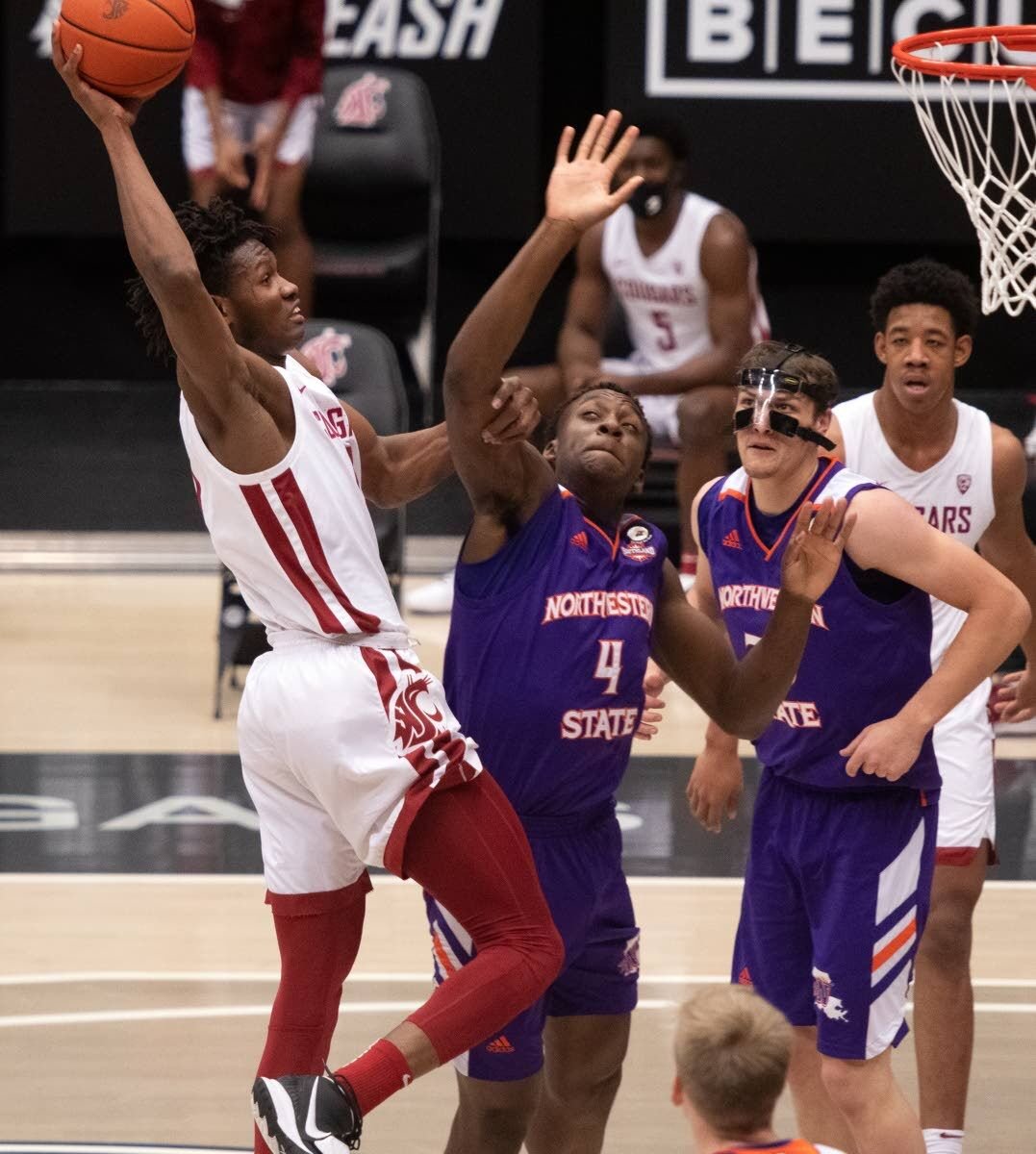 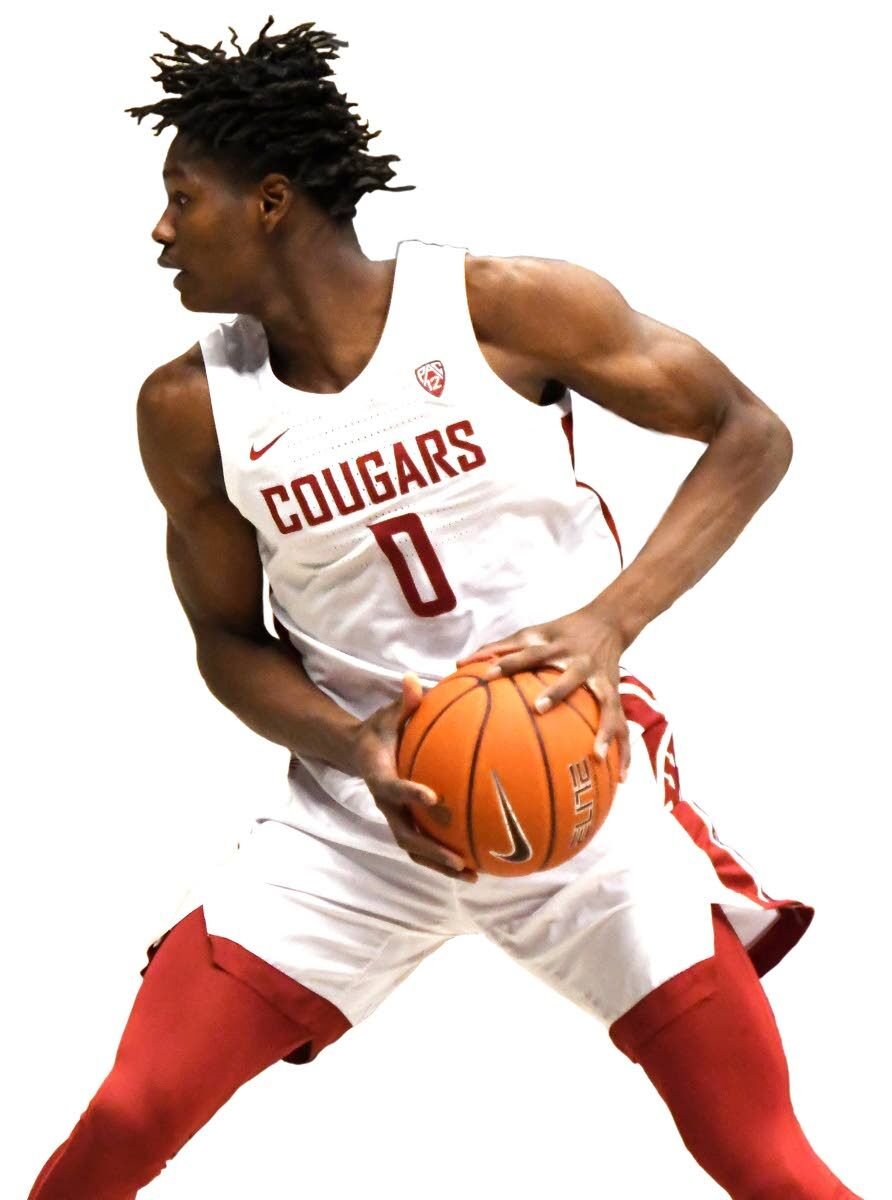 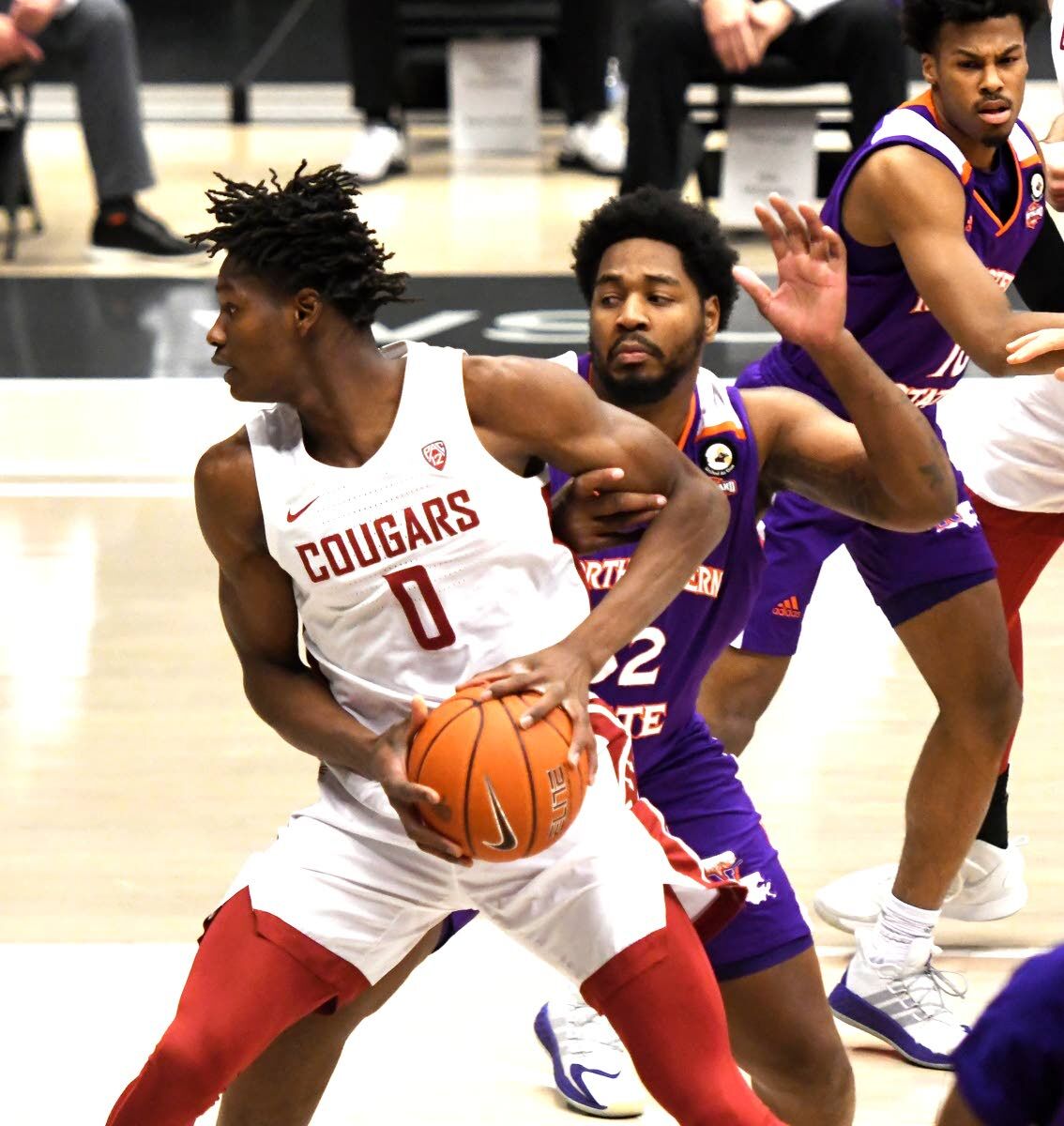 Washington State center Efe Abogidi (0) spins around Northwestern State center Larry Owens (32) during the first half of the Cougars 62-52 win over the Deamons Wednesday, Dec. 23, 2020 at at Beasley Coliseum in Pullman.

Washington State center Efe Abogidi (0) spins around Northwestern State center Larry Owens (32) during the first half of the Cougars 62-52 win over the Deamons Wednesday, Dec. 23, 2020 at at Beasley Coliseum in Pullman.

The secret’s out now on Washington State’s Efe Abogidi.

The Cougar men’s basketball team managed to keep its star freshman big man’s tremendous talent somewhat under wraps in the lead-up to and during the early portion of this unblemished start.

But it was just a matter of time.

“We knew he was an elite athlete when he signed,” Cougars coach Kyle Smith said of Abogidi, the wildly entertaining headliner of a recruiting class considered to be WSU’s best of all time.

“When I went to see him (during recruitment last fall), I just said, ‘Hey, he’s the best athlete I’ve seen, period.’ ”

He’s shown so much promise so early, that speculation about his sky-high potential has begun to generate on a larger scale.

“I try to discourage that stuff because (Rothstein) is a hype machine,” Smith said, laughing. “But he deserves it. I think he is probably a pretty underrated freshman.”

Abogidi’s whirlwind route to reach Pullman has something to do with that. Coug coaches will admit that he’s ahead of schedule. In fact, his recruitment was a little bit of a “shot in the dark” anyway.

“Frankly, we didn’t know how good he’d be,” said assistant John Andrzejek, the Cougars’ point man on international prospects. “We trusted our gut.”

In the spring of 2019, Andrzejek took his chances via Facebook, sending a message to Abogidi, who still had about eight months to go until he was recovered from three surgeries to repair his torn ACL, MCL and meniscus.

“It’s a blessing to play again,” Abogidi said. “There was a point back during recruitment where I didn’t think I’d play anymore. So being able to perform well at this level, I’m even a little surprised.

“I wasn’t really expecting anyone to offer me.”

Online check-ins developed into a scholarship for the product of Australia’s prestigious NBA Global Academy, who’d gone from his hometown of Ughelli in Nigeria’s Delta State to the fledgling African branch of the NBA Academy in Senegal, then finally down under, to Canberra — all in the span of two years.

There, at the Australian Institute of Sport, he was afforded the resources to grasp some of the game’s more intricate details, and to rehab back to health.

“I realized where I came from, the path I took to be here right now — to be in the best program in the world. I was thinking: ‘Why give up now?’” Abogidi said of the AIS, which has developed such NBA notables as Patty Mills, Andrew Bogut, Matthew Dellavedova, Joe Ingles and WSU alumnus Aron Baynes.

Abogidi was coached up in Canberra by Marty Clarke and Adam Caporn, both of whom were former Saint Mary’s assistants — the same goes for Smith and Wazzu assistant Jim Shaw. Smith had recruited some of Clarke’s players from AIS already.

Smith tabbed it a “team effort.” Andrzejek made the earliest connection, prompted to reach out after he saw Abogidi, then playing with the Senegal squad, go toe-to-toe with a few international stalwarts at the 2017 NBA Academy Games in Canberra.

“He was extremely productive on the court with a couple of other guys I project will end up being first-round picks,” Andrzejek said. “They weren’t only high-major centers, but NBA players, and he’s producing. So we’ve gotta take a look at him.

“We jumped in early. I’d be lying if I said we were 100 percent certain he’d be this good already.”

Then, down the road, Smith and Shaw trusted the sources they’d built through hoops relationships in Canberra, and the pieces fell into place.

“He’d been hurt. It was kind of an educated guess,” Smith said. “And him being in the NBA Academy helped us, as far as knowing he was getting good training, good coaching.”

Smith was impressed with Abogidi’s workouts during a visit to Australia in the fall of 2019. Later that year, Shaw journeyed to Las Vegas to take in a prep tournament featuring Abogidi, who was playing for the first time in approximately two years.

Abogidi had already signed on at that point, but his performances against some of basketball’s elite youngsters only reaffirmed that it was the right move for the Cougars.

Abogidi’s three-star 247sports.com rating seems like a low-ball now, but it’s hard to argue it too much considering his wide gap between competitions.

“To get an athlete like that, where the program was, you’re probably gonna have to take some risks,” Smith said. “We were willing because of his character first of all. It seemed like a good percentage play on our part. So far, so great.

“He’s just been taking off, improving by leaps and bounds.”

As a perfect coincidence, the WSU staff also had discovered that Abogidi’s uncle works at Schweitzer Laboratories in Pullman.

“We thought that was really unique,” Smith said. “It really is a storybook-type deal.”

The Cougs' meeting with Pac-12 foe Arizona tonight at home will act as one of the first of Abogidi's chances to exhibit his rapid development on a brighter stage. He estimated he's only played a dozen or so games since his injury.

And quite the bounce-back it's been.

He’s the only WSU freshman to log eight starts this year. After a modest first five games, he exploded onto the scene, becoming the only Cougar frosh aside from program legend Steve Puidokas in the 1970s to register three consecutive double-doubles.

Abogidi ranks top 50 nationally in rebounds (9.1) and blocks (2.12) per game, and second in the Pac-12 in the latter. He averages 10.3 points per outing. Using advanced metrics, basketball data guru Bart Torvik measured Abogidi’s defensive impact as No. 4 in the NCAA.

“I wasn’t really in game shape (earlier this season),” Abogidi said. “That was hard for me, but after a while, I started to pick up the pace of college basketball. I started getting better, just getting my stroke.”

Given his recent introduction to basketball, Abogidi’s breakout as one of the top newbies in the country is particularly fascinating.

Naturally, Nigeria is a “soccer world.” Abogidi was also an accomplished track athlete, but had no hoops background in his family.

“Back home, basketball’s not a thing,” he said. “There’s probably only like 10 basketball players in that place.”

In 2013, while he was running through events at a local track, a random basketball coach approached him, suggesting he try it out. Not long later, he happened upon some neighborhood kids heading to a nearby court. They marveled at his 6-5 frame, and goaded him into giving it a shot.

“The first day, I was already doing some things the other guys couldn’t,” he said. “The first thing that impressed them was the size of my hands. They’d pass me the ball and I’d grip it like it was an egg or something.”

For a while, he was self-taught, learning the game’s fundamentals through YouTube videos of Tim Duncan and Kobe Bryant and honing skills on his block.

“I was practicing, but I had no coach. I was just doing it for fun,” he said. “Then I started to realize my capacities.”

As Abogidi improved, he sought out avenues away from home. The following year, he made his way to Lagos, Nigeria, for a camp run by former SuperSonic Olumide Oyedeji, who would become a hoops mentor of sorts for Abogidi.

Abogidi continued to stand out at Olumide’s events, earning back-to-back camp MVP nods in 2015 and 2016.

Soon after, the NBA ramped up its grassroots basketball efforts, launching several academies overseas designed to fashion routes for international players. In May of 2017, the NBA Academy Africa in Senegal opened its doors, and Abogidi was part of its inaugural class.

He went viral at an NBA Academy event a short time later, leaping from the free-throw line and pulling off a one-handed slam in a dunk contest. The clip raked in millions of views on social media.

“From the first day I stepped out of my town and saw how I played, I realized I had the potential to make a living out of basketball,” he said with his Aussie/Nigerian blended accent. “I just play the game as it comes. Don’t rush things.”

Abogidi helped guide the African affiliate to a title in the 2017 NBA Academy Games — the Australian event recalled by Andrzejek — but sustained his injury in the finals.

Officials at the NBA Global Academy in Canberra, which takes in the top talents from around the world, then scooped him up. AIS could provide the best facilities and medical personnel possible.

Abogidi reaggravated his knee injury on a test jump after nearly recovering, and remembers a doctor giving him options: Either stop playing the sport altogether, or “rehab harder than anyone else.”

In all, he had three surgeries and pushed through an “insane” two-year process of rehabilitation. Other NCAA suitors pulled back, but WSU kept tabs on the under-the-radar prospect, who’s fast made an impression on his fellow Cougs.

Smith said Abogidi builds camaraderie among the team, and his leadership traits are past his years.

So is his talent apparently, and everyone outside of Pullman is starting to catch wind of it.

“We knew there were some abilities there pretty quick. He just makes some plays in practice you don’t see often,” Andrzejek said. “What makes him special is he’s a great teammate, and he’s all about wins and losses, bottom line. But obviously he’s got attention coming to him now.”