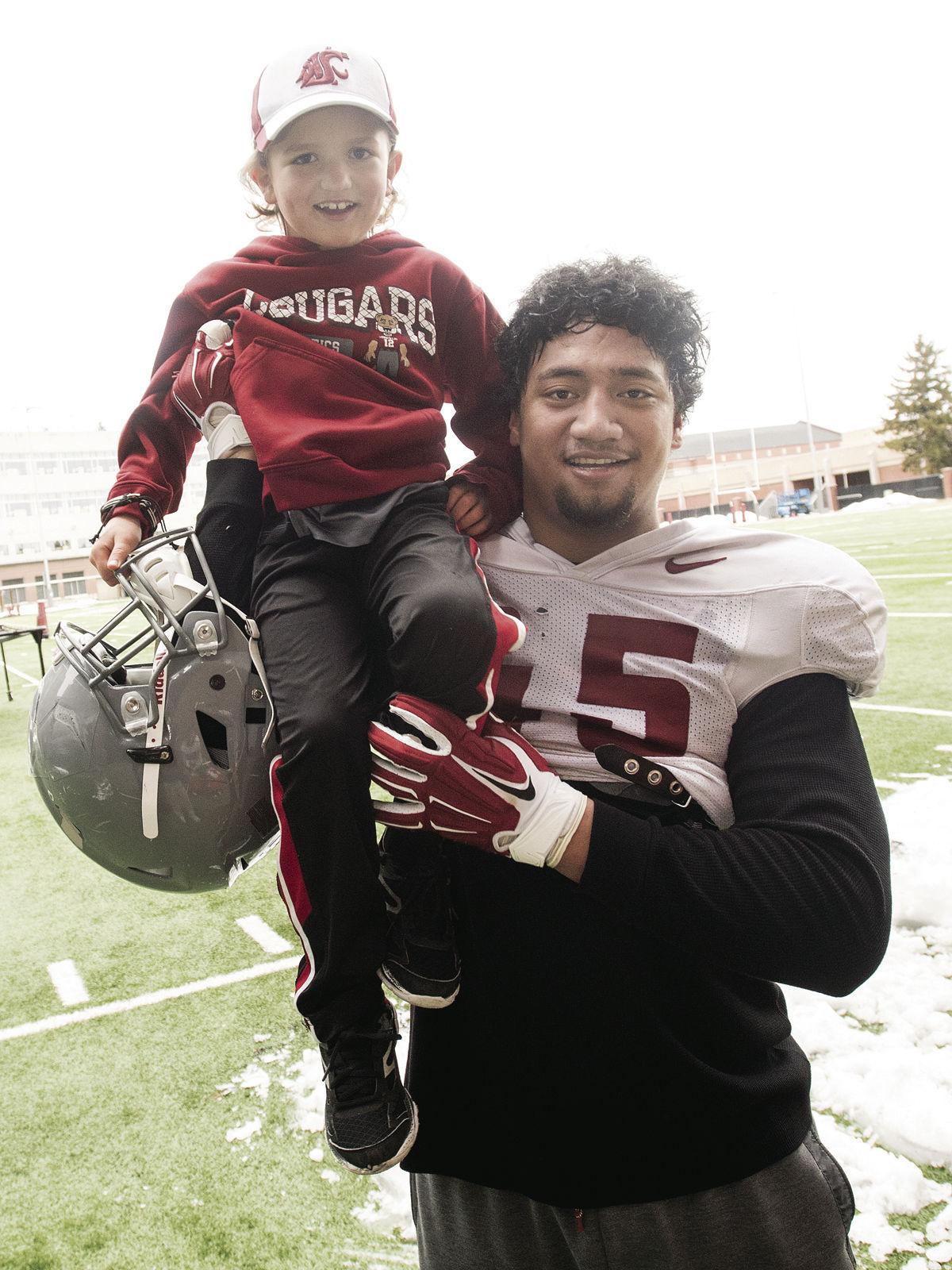 Cougar linebacker Logan Tago holds his friend Markus Hauck on his shoulder after practice Tuesday at Rogers Field in Pullman. 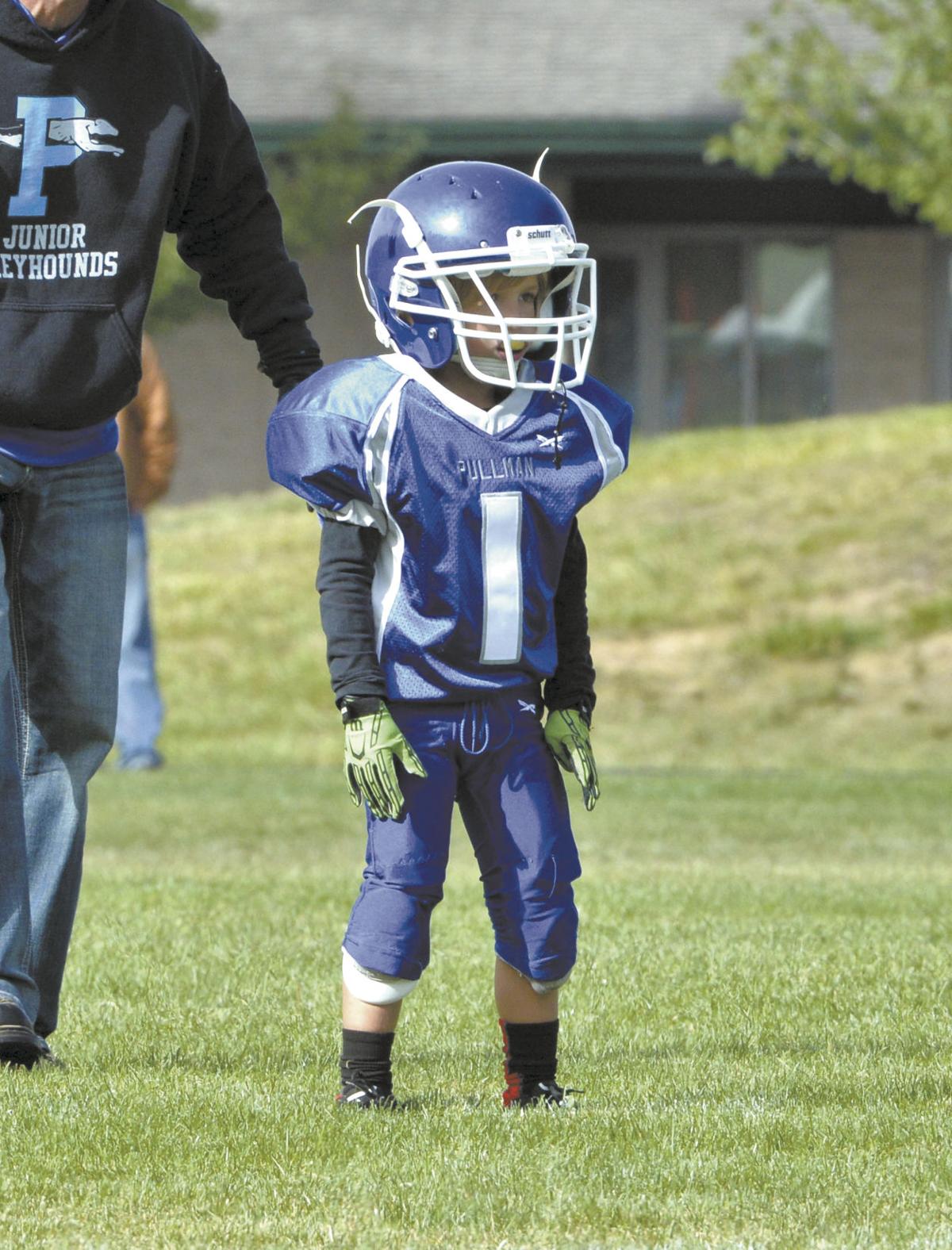 Markus Hauck played defensive end for the Junior Greyhounds during the 2017 season, just like his friend Logan Tago of the Washington State football team.

Cougar linebacker Logan Tago holds his friend Markus Hauck on his shoulder after practice Tuesday at Rogers Field in Pullman.

Markus Hauck played defensive end for the Junior Greyhounds during the 2017 season, just like his friend Logan Tago of the Washington State football team.

SAN DIEGO — For Logan Tago, it started out as “community service,” a way of making amends for something he believes never should have happened.

Every Monday afternoon, the Washington State defensive lineman from American Samoa would climb into a car with a group of other redemption seekers for a 7-mile drive from their Pullman campus to the tiny, gravelly town of Albion. There they would interact with young children in a WSU-sponsored after-school program, helping them with homework and coordinating physical activities in the gym.

Early on Tago’s first day in this program, he was approached by a small tow-headed boy with a winning smile, who took a good look at him and ventured, “Are you a football player?”

That was the beginning of Tago’s unlikely friendship with Markus Hauck, now 8, who remains close to the Cougar athlete nearly a year later, to the surprise and gratitude of the boy’s single mother. Tago’s support of her son has gone well beyond community service.

“The bond was crazy,” Cosette Hauck said. “I was just amazed how far above and beyond Logan went.”

With the harsh demands on college football players’ time, Tago hasn’t been able to pay frequent visits to Markus the past few months as the Cougars crafted a 9-3 season and earned a berth in the Holiday Bowl, where they play Michigan State on Thursday (6 p.m., FS1) at SDCCU Stadium in San Diego.

But he and Markus text, speak on the phone and sometimes video-chat — conversations that are like godsends to Cosette Hauck. She moved to the Palouse from Prescott, Wash., three years ago to get special-needs education for another son, 6-year-old Ramsey, who is autistic. Cosette also has a 4-year-old daughter, and raising the three children has been especially challenging after a divorce two years ago.

At the time he met Tago, Markus was struggling in school a bit and trying to come to grips with his role as the oldest child, at age 7. His brother, though endearing, is prone to persistent tantrums. Ramsey has also grown a little taller than Markus, a sore point for a boy who’s frequently teased at school for his small stature.

“Markus has come home crying several times, and he has called Logan,” Cosette Hauck said. “And Logan calls him back. ‘It can be tough when you’re younger, and kids can be mean,’ he says, ‘but you’ll be fine.’ He tries to give him a pick-me-up, and he does it. He’s been huge for us.”

Their bond is partly a fondness for football, said Tago, who is courteous and reserved in the manner of many Polynesian football players for whom English is a second language. But he speaks unreservedly on the topic of Markus.

“That first day, he asked me if I was a football player,” he recalled recently. “I said yeah, and he was so pumped. He was excited. He was, like, ‘I want to be a football player, I want to be like you so bad.’ I used to go every week for the after-school program. Every time I walked into the room, he’d run to me and hug me.

At that point, he was known by the public primarily as a Wazzu football player who got singled out by police after an alleged late-night assault and robbery on Pullman’s College Hill in June 2016. Accounts of the incident vary widely, but Tago wound up accepting a plea bargain for third-degree assault and was sentenced to 30 days in jail and 240 hours of community service.

“That was my first time ever (dealing with something like that),” Tago said. “I can’t live in the past. If I do, it’s not the right story. I’m moving on. My family knows me. I’m not that person.”

As a junior this year, Tago is starting to rewrite his story. A backup end on the Cougars’ stellar defensive line, he has made 22 tackles, including three for loss, and is tied with Hercules Mata’afa for second on the team with five quarterback hurries.

Markus, too, was a defensive end in 2017, playing with mostly older, larger boys on a successful recreation tackle team called the Greyhounds. He wore jersey No. 1 because that was Tago’s number as a youngster.

“We lost one game all season,” Markus said. “It was because we messed up our stance. They did a pass, we thought they would run and they got a touchdown. We played them again and we won.”

He’s also doing much better in school, according to Cosette Hauck.

Tago, who was always one of the big kids, can’t directly relate to Markus’ size issues — or at least he couldn’t until this season, when he moved from rush linebacker to DE, where he’s undersized at 6-foot-3 and 247 pounds.

But he can relate to the Haucks’ life in the mostly low-income community of Albion, which reminds him in some ways of Samoa. One of six children in his family, he took long bus rides to school and, if football practice ran late, walked more than 10 miles home.

Daniel Ekuale, another WSU defensive lineman from Samoa, said Tago’s generosity is of a piece with island culture.

“That’s how we Poly’s grew up — we’re just very friendly with everybody, even if we don’t know them,” he said.

A sports-management major, Tago is thinking about pursuing a career in coaching, inspired by former WSU assistant Joe Salave’a, the man responsible for shepherding numerous Polynesians to Pullman. Tago said his rapport with Markus has boosted his confidence that he can play a mentor’s role in the manner of Salave’a.

Even during football season, Tago has found ways to maintain his connection with Markus. He gave him tickets to the Cougars’ season-opening shutout of Montana State, and the Haucks sat with the parents of linebacker Peyton Pelluer, another of Markus’ favorite Cougs. It was the first time he’d seen the team play in person.

Last Tuesday, with classes done for the semester and a holiday laxity settling into the often buttoned-up world of WSU football, Tago took Markus on a grand tour of the normally off-limits Cougar Football Complex.

The boy posed for locker-room photos with Tago, Pelluer, quarterback Luke Falk and many others. He met several assistant coaches and scored little desktop gifts from them. Then, as Samoan center Fred Mauigoa watched with a curious smile, Markus and Tago ducked outside to play catch for several minutes in an empty Martin Stadium.

“Best day ever,” Markus reported to his mother.

Markus, too, bestowed a gift that day — for Tago, of course, tucked into a Christmas stocking the athlete took home and examined later. It was a leather bracelet with a wooden cross, and it matches one that Markus himself owns.

Markus explained the meaning later: He and Tago are best friends.