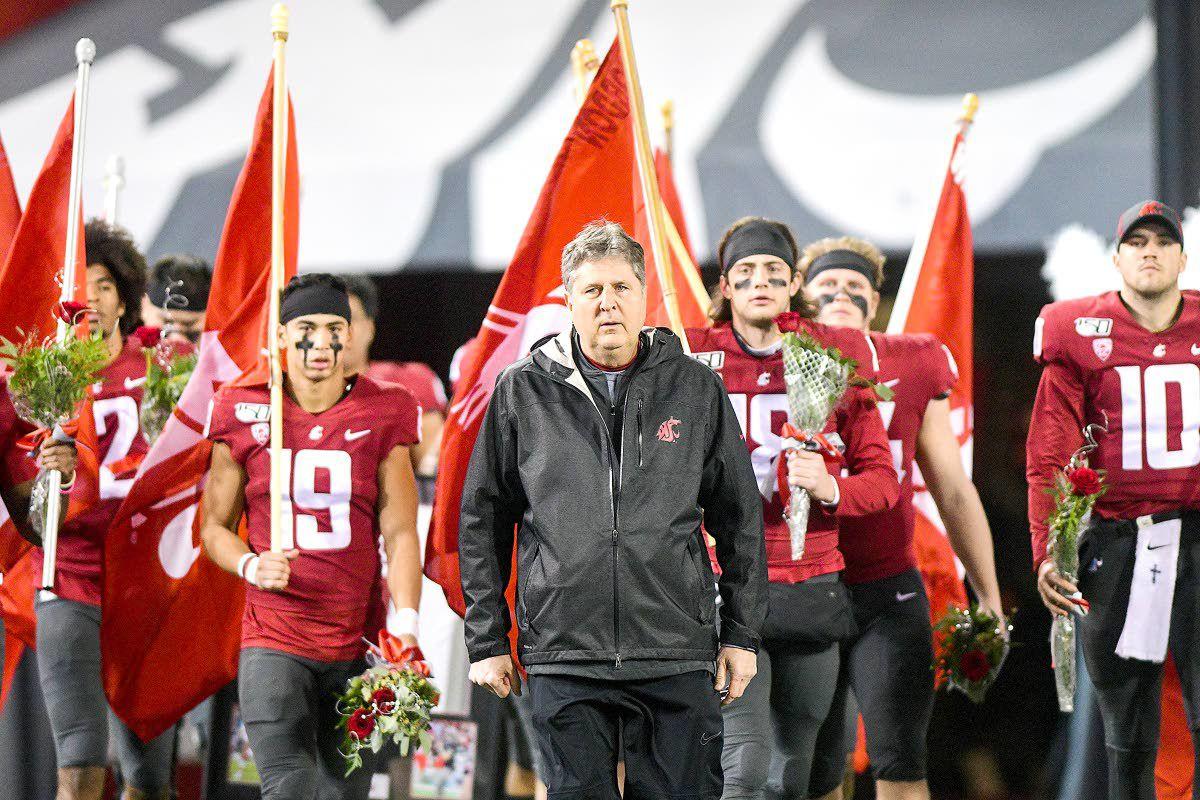 Former Washington State head coach Mike Leach leads the senior class of Cougars out of the tunnel prior to the team’s final home game on Saturday, Nov. 23, 2019, at Martin Stadium in Pullman. 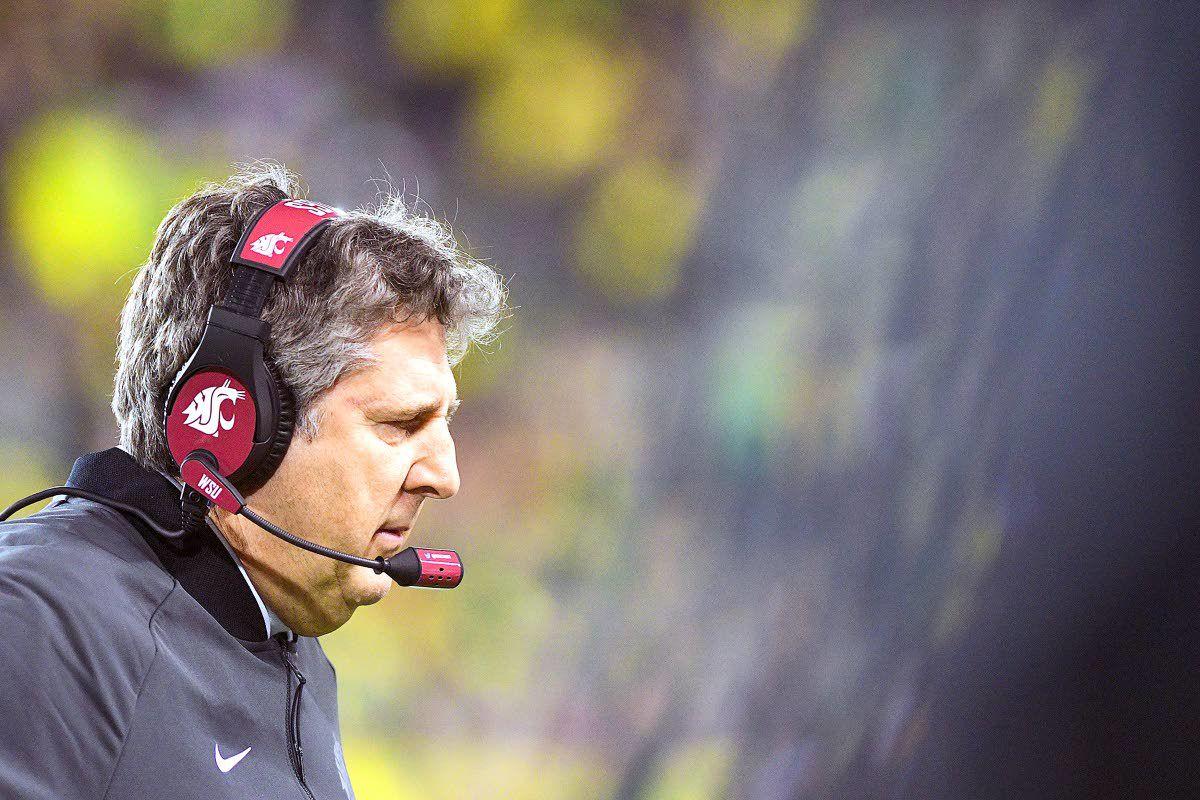 Washington State head coach Mike Leach walks back to the sideline after having a conversation with the head referee during the second quarter of a Pac-12 Conference game on Saturday night at Autzen Stadium in Eugene, Ore.

Former Washington State head coach Mike Leach leads the senior class of Cougars out of the tunnel prior to the team’s final home game on Saturday, Nov. 23, 2019, at Martin Stadium in Pullman.

Washington State head coach Mike Leach walks back to the sideline after having a conversation with the head referee during the second quarter of a Pac-12 Conference game on Saturday night at Autzen Stadium in Eugene, Ore.

The Ole Miss report was fake news. The one involving its archrival is very real.

Mike Leach, who has been a theoretical candidate for seemingly every major-college football coaching job in the South in recent years, is indeed leaving Washington State and taking his celebrated, sometimes controversial pirate act to Mississippi State, both schools confirmed Thursday.

The news comes more than a month after an unidentified person used a fake Twitter account to fool University of Mississippi fans into thinking their school had hired Leach — a claim quickly discredited.The Air Raid maestro also had been mentioned in connection with recent openings at Arkansas, Florida State, Missouri and elsewhere.

So the Cougars weren’t exactly shocked when Pete Thamel of Yahoo Sports posted a Twitter report that Mississippi State had hired Leach. It held up as accurate.

“Based on the need for winning football coaches, I kind of lived with the attitude, ‘It’s only a matter of time,’” WSU athletic director Pat Chun said at a news conference, “because if the right opportunity came along, why wouldn’t Mike take it? He’d done such a great job here. He earned the right to dictate what the next chapter is going to be.

“We’re ready as we can be. The hope was that this day wasn’t going to come, but we always needed to prepare (as if) it was coming.”

Leach will replace Joe Moorhead, who was fired Jan. 3 after going 6-7 for Mississippi State this past season. He went 14-12 during a two-year stint.

Leach grew up in Cody, Wyo., but has long felt an affinity for the South. The Mississippi State job takes him back to the Southeastern Conference, where he spent 1997 and 1998 as offensive coordinator for Hal Mumme at Kentucky. Later he spent a successful decade as head coach at Texas Tech, where he ushered into prominence the Air Raid offense he’d co-authored with Mumme.

The quarterback’s father, Flint Minshew, said the hiring was well-received in Mississippi.

“I think they should have done it from the get-go,” he said by phone, alluding to the fact Mississippi State had explored other options before settling on Leach. “I mean, I’m obviously a huge believer in Leach. As soon as they fired the other guy, that would have been my first phone call.”

In his eight years at WSU, Leach led the Cougars to six bowl appearances, including one in each of the past five seasons, and in 2018 he was named National Coach of the Year by the American Football Coaches Association.

Not long after the Yahoo report, Cohen coyly confirmed the hiring by tweeting a brief video featuring an image of a pirate scanning a body of water. Leach has been known as The Pirate since his days at Texas Tech.

Chun said Leach had kept him in the loop this week.

“A couple of days ago, I guess I left that conversation feeling we were in good shape,” the AD said. “My assumption is something changed in the last 24 hours. And he called me this morning and said he’d accepted the job. It was a bittersweet phone call. I’ve enjoyed working with Mike, happy that he’s able to take his career in a direction he wants to go.”

Leach agreed to the latest annual rollover of his five-year contract with the Cougars in December. Chun said the contract calls for WSU to receive a buyout of $2.25 million for the coach’s departure.

Leach’s ubiquity in the coaching rumor mill largely was based on the distinct influence his Air Raid has exerted at all levels of football, along with his 16 bowl berths in 18 years as a head coach.

But schools seemed leery of his reputation as a maverick, remembering his messy departure from Texas Tech after drawing accusations of unsympathetic treatment of a player with a concussion. Two years ago, Tennessee appeared poised to hire Leach before school administrators abruptly moved in a new direction and fired their athletic director.

Mississippi State is considered one of the underdogs of the powerful SEC, but its coaching history likely appeals to Leach. In a tenure that closely resembled Leach’s at WSU, Dan Mullen took the Bulldogs to eight bowl appearances in a nine-year stay before jumping two years ago to Florida, where he continues to thrive.

Also, Mississippi State was coached from 1979-85 by one of the prime developers of the wishbone offense, Emory Bellard, whom Leach has cited as a distinct influence on his Air Raid.

“I can’t tell you how excited I am to be the head football coach of the Mississippi State Bulldogs,” Leach said in a news release by the Starkville, Miss., school. “I loved Washington State, but I am excited for the next chapter in the SEC.”

He will be introduced in a news conference 10 a.m. Pacific today in Starkville.