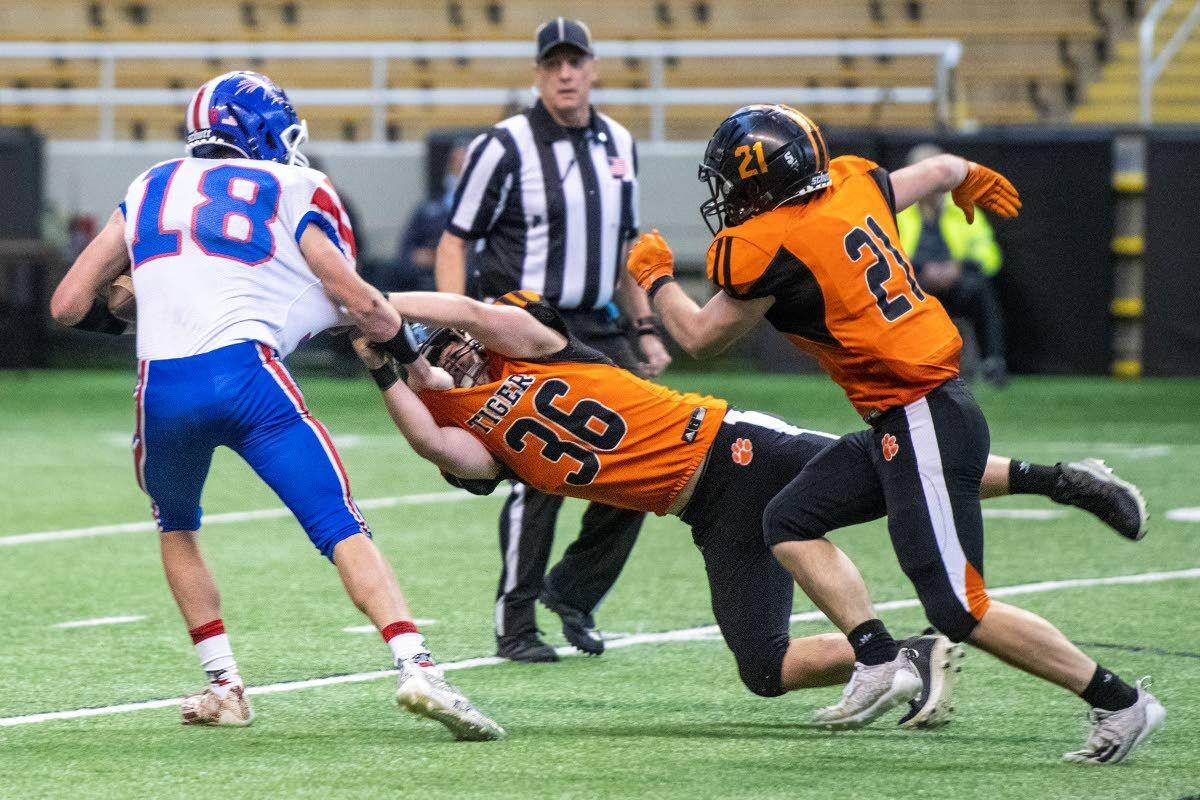 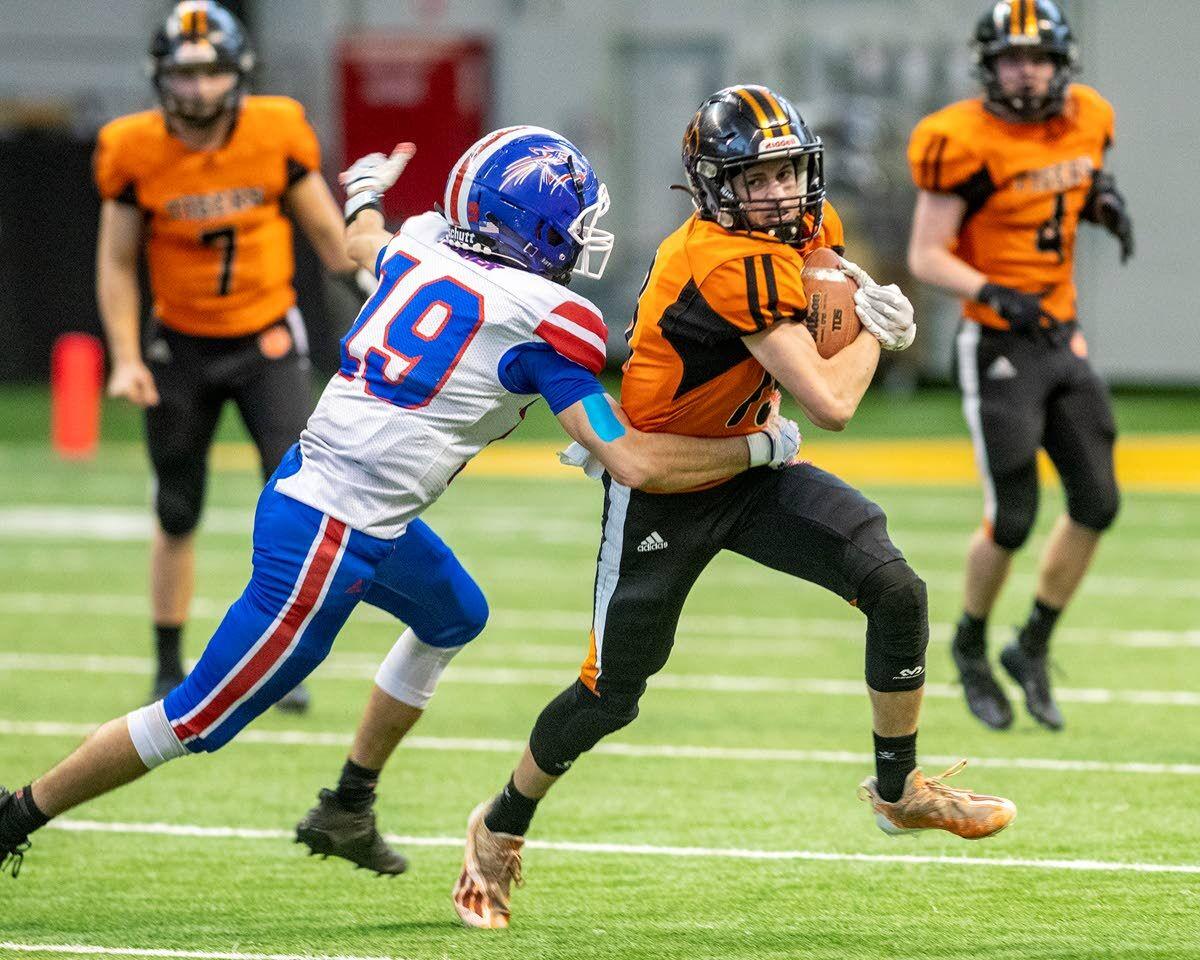 Kendrick running back Sawyer Hewett (19) is tackled by Castleford cornerback Zeke Fisher (19) during the third quarter of an Idaho Class 1A Division II state tournament semifinal-round football playoff game at the Kibbie Dome on Saturday afternoon in Moscow.

Kendrick running back Sawyer Hewett (19) is tackled by Castleford cornerback Zeke Fisher (19) during the third quarter of an Idaho Class 1A Division II state tournament semifinal-round football playoff game at the Kibbie Dome on Saturday afternoon in Moscow.

Kendrick’s 2020 season came to an end with a 40-14 loss to Carey in an Idaho Class 1A Division II state football tournament semifinal-round game. Afterward, coach Zane Hobart told his team that in 2021, they were going to be back with an opportunity to make it to the championship game.

The Tigers made good on Hobart’s words and finally cleared that semifinal hurdle with a 46-30 win this past Saturday against Castleford at the University of Idaho’s Kibbie Dome.

For the first time since 2016, Kendrick will play in the title game as the Tigers (8-2), the fifth-ranked team in the state in the final media poll of the season, will take on the top-ranked Panthers (11-0) at 1 p.m. Saturday in the Kibbie Dome.

“It is kind of poetic,” Hobart said. “Carey is a terrific program, they’ve been good for decades. Coach (Lane) Kirkland is in his 22nd year and he knows how to get (his teams) into state championship games.”

Kendrick’s offense is led by sophomore quarterback Ty Koepp. During the playoffs, he’s completed 56 percent of his passes for 234 yards along with seven total touchdowns. He’s also been a threat in the run game, as he ran for more than 100 yards against Castleford.

“He’s starting to become the guy for us,” Hobart said of his two-year starter. “He’s making better reads and has been incredibly smart with the football.”

“He’s working towards that veteran signal-caller status. When he came in as a freshman it was tough at times but we knew he was going to get better and that’s what you’re seeing now.”

Carey is a run-heavy team with one of the best backs in the state in Conner Simpson.

“He’s a stud, there’s no other way to put it,” Hobart said. “He’s not your prototypical guy. He’s got a little different body type. He’s about 5-foot-3 but he’s slick. He’s tough to bring down with his low center of gravity.”

The Tigers’ have been able to air it out a bit more because of the run game’s success. Kendrick has used two backs — Wyatt Fitzmorris and Sawyer Hewett — in the postseason.

“It’s actually kind of new territory to have several runners that can get the ball out of the backfield,” Hobart said. “It’s been pivotal to our success in the playoffs. Having fresh legs on any given down is huge.”

Carey’s defense has allowed 13 points per game, which is the lowest in the classification.

“Their whole defensive unit is solid,” Hobart said. “They do a really good job at filling gaps and not over pursuing. They don’t allow a cutback lane and they tackle extremely well.”

Koepp has had the luxury of throwing from a clean pocket during the playoffs, as he hasn’t been sacked yet. The coaching staff made some offensive line adjustments before the start of the postseason.

Senior Maison Anderson, who played most snaps this season at fullback and linebacker, made the switch to left guard.

“He started there last year, so he was no stranger to the position,” Hobart said. “We felt he completed the unit and since we’ve made that switch, we’ve played better upfront.”