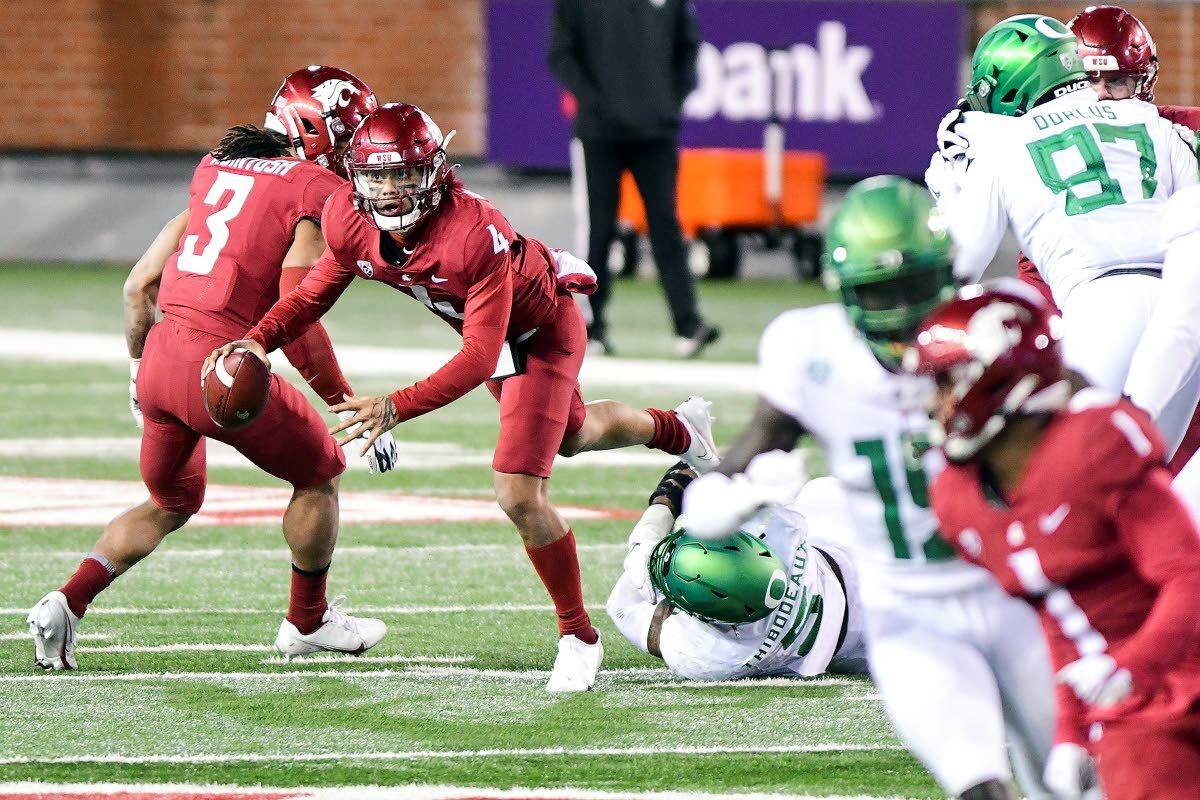 Washington State quarterback Jayden de Laura (4) escapes a sack by Oregon defensive end Kayvon Thibodeaux (5) as he looks for an open receiver in the fourth quarter of a Pac-12 Conference game on Saturday evening at an empty Martin Stadium. 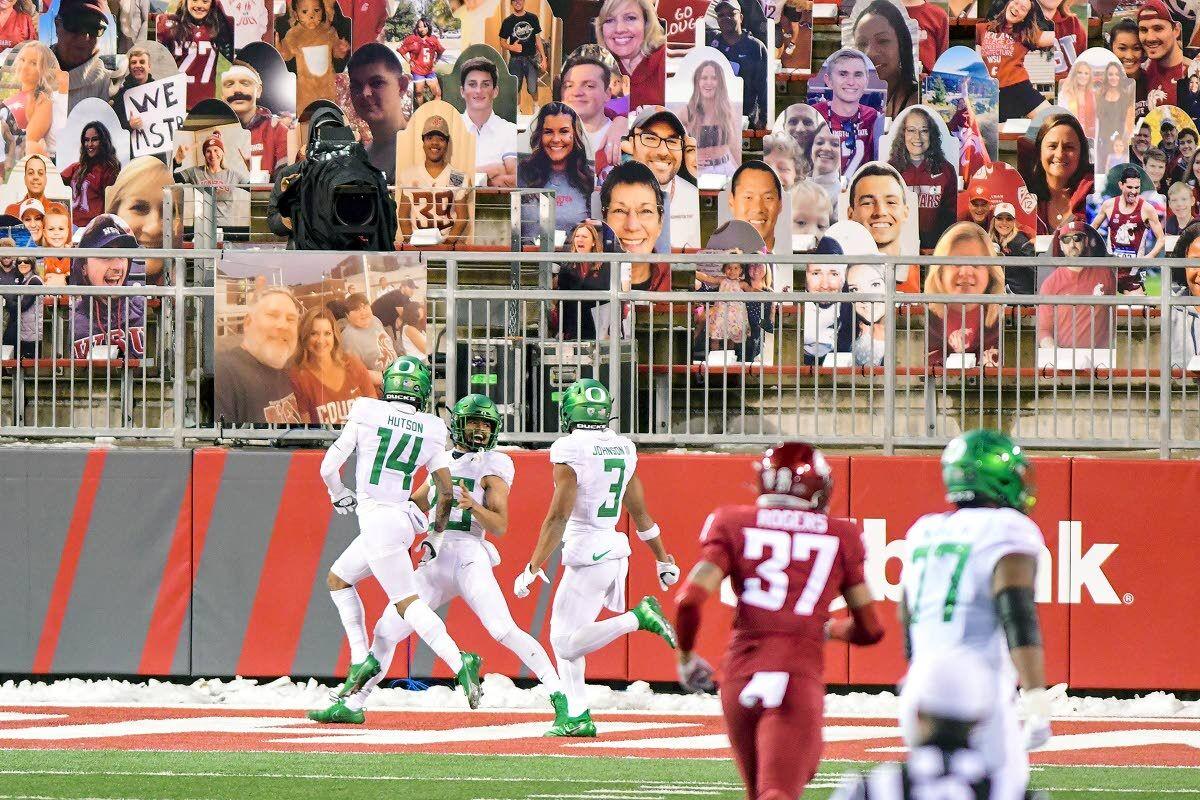 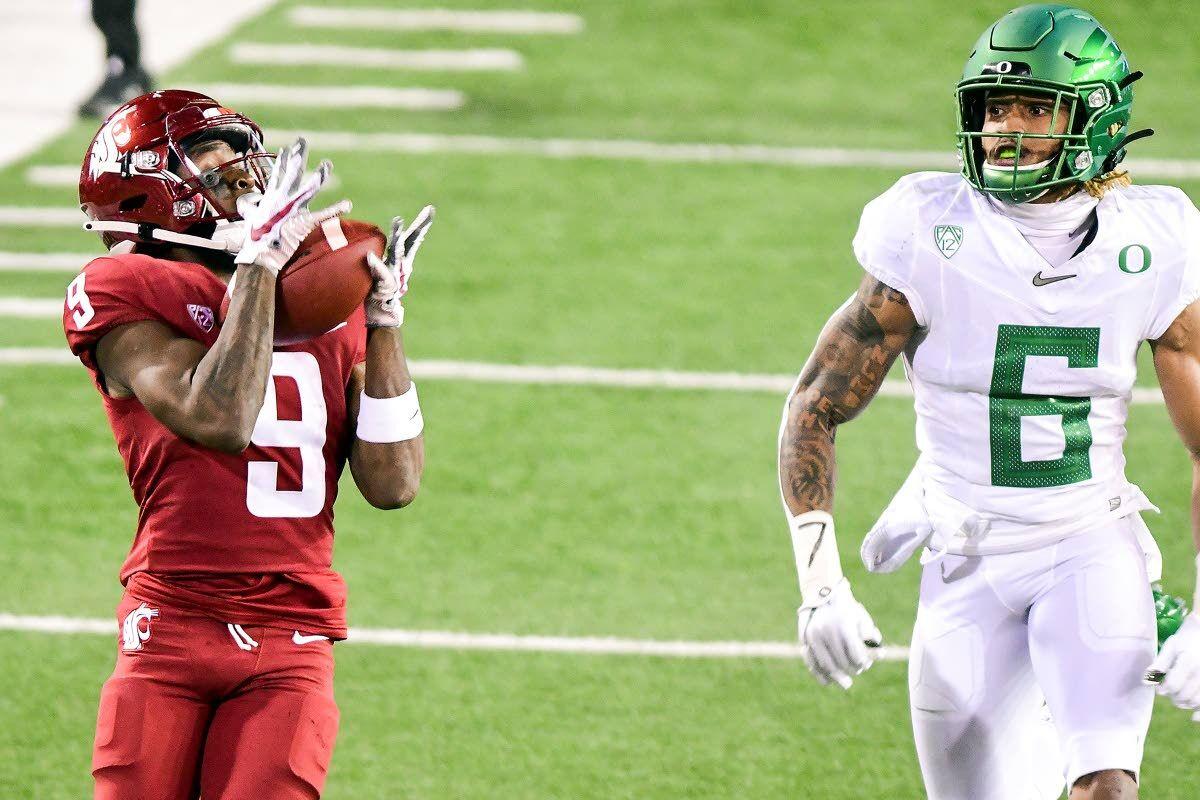 Washington State wide receiver Renard Bell (9) pulls in a pass from quarterback Jayden de Laura as Oregon safety Nick Pickett (6) looks on during the first quarter of a Pac-12 Conference game on Saturday evening at Martin Stadium in Pullman.

Washington State quarterback Jayden de Laura (4) escapes a sack by Oregon defensive end Kayvon Thibodeaux (5) as he looks for an open receiver in the fourth quarter of a Pac-12 Conference game on Saturday evening at an empty Martin Stadium.

Washington State wide receiver Renard Bell (9) pulls in a pass from quarterback Jayden de Laura as Oregon safety Nick Pickett (6) looks on during the first quarter of a Pac-12 Conference game on Saturday evening at Martin Stadium in Pullman.

During a stretch when a true-freshman walk-on was inducing one turnover after another, the Washington State football team looked poised to knock off the 11th-ranked team in the country.

The more this game normalized, the more it belonged to the Oregon Ducks.

Allowing touchdowns on each of the Ducks’ final four possessions, the Cougars squandered an early 12-point lead Saturday and lost 43-29 in a Pac-12 game at an empty Martin Stadium despite three consecutive first-half takeaways featuring new safety Ayden Hector.

Washington State (1-1, 1-1 Pac-12) turned heads against a favored opponent for the second time in as many weeks, but its offense tended to stall in the red zone and its defense got hoodwinked by explosive plays before seeming to run out of steam.

“I appreciate them playing hard and sticking together,” first-year Cougar coach Nick Rolovich said. “But at the end of the day, we’ve got to make big plays, we’ve got to execute better, we’ve got to coach better. I think that’s about the gist of it.”

Most critically, Oregon running back Travis Dye exploited a matchup against edge rusher Ron Stone Jr. in the third quarter, streaking down the right sideline and hauling in a pass from Tyler Shough for a 71-yard touchdown and a 36-22 lead.

In an earlier defensive lapse, the Ducks (2-0, 2-0) sliced a deficit to five points as Jaylon Redd raced past cornerback George Hicks III for a 57-yard reception that set up a short scoring run by CJ Verdell with 18 seconds left in the first half.

“Tons of credit to the players for just being very determined and resilient,” Oregon coach Mario Cristobal said, “finding a way to push ahead and win the football game.”

Hector, who had joined the Cougars just a few weeks ago, uncannily contributed to takeaways on three consecutive Oregon possessions in the first half, recovering two fumbles and intercepting a pass. The first turnover led to Jayden de Laura’s 4-yard scoring pass to Renard Bell, and the third preceded a field goal by Blake Mazza.

De Laura, another true freshman, threw for 321 yards and was 25-of-39 passing in another strikingly self-assured performance, but Wazzu managed only one second-half touchdown and relied heavily on Mazza, who kicked goals of 39, 49 and 25 yards, with no misses.

Impressive again was WSU running back Deon McIntosh, who rushed for 92 yards in the continued absence of star Max Borghi, who is thought to be sidelined with an undisclosed injury.

The Cougars welcomed back a few players who had missed their season-opening 38-28 win Nov. 7 at Oregon State, but they still appeared to lack depth at certain positions, partly because of unspecified opt-outs amid the coronavirus pandemic.

The pandemic, of course, also is the reason no spectators or tailgaters were allowed on a chilly but dry and windless afternoon and evening.

De Laura repeatedly threw to his elusive slotbacks as Bell made 10 catches for 158 yards and a touchdown and Travell Harris added nine receptions for 94 yards.

Shough, a sophomore, took a limited number of downfield shots for the Ducks in going 21-for-30, but his zone-read runs confused the Cougs as he rushed for 81 yards to complement the 118 by Verdell.

The Ducks took their first lead since the early going with Shough’s 16-yard scoring pass to Dye with less than four minutes left in the third quarter. They stretched the margin to nine points early in the fourth when Shough hit Johnny Johnson III for a 3-yarder after opening the possession with a 33-yard keeper.

Mazza made it a one-score game with his 25-yard field goal with 10 minutes remaining. But the Ducks answered quickly with the long Dye reception.

The Cougs struck back with a short McIntosh touchdown run, aided by a targeting call on Oregon’s Nick Pickett after a reception by Bell. But Oregon virtually sewed up the win with a quick 75-yard drive capped by a 1-yard run by Cyrus Habibi-Likio with 1:40 on the clock.

De Laura found Lucas Bacon for a 13-yard scoring pass to open the Cougars’ scoring in the first period — the first career catch for the sophomore from Spokane.

Mazza later shook off a holding penalty on one of his blockers that negated a 39-yard field goal. He connected from 49 to stretch the Cougar lead to 19-7 with 18 seconds left.